All lies and jest; still a man hears what he wants to hear and disregards the rest. Paul Simon: The Boxer

This is nothing so daring as an attempt at summary; just my quirky take on what the Ho Chi Minh Trail signified. Its logistical complexities could fill a dozen books, as could the attendant internal shenanigans of US generals with egos the sizes of small planets. So too could the byzantine domestic politics of the two nations, Laos and Cambodia, dragged into a vortex at once civil war, anti-colonial struggle and the proxy conflict of superpowers deterred from direct engagement by thermonuclear realities. 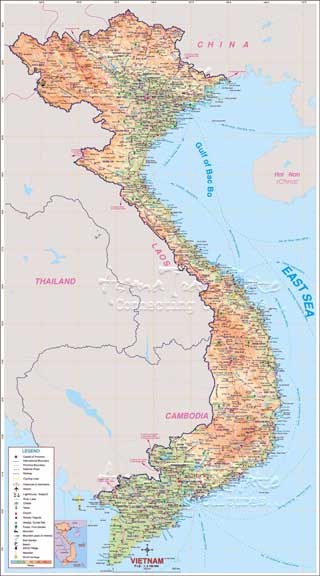 Grasping the Trail’s strategic significance is simpler. Topographically speaking, Vietnam is a striking snake. Its head butts China to the north and north-east; its truncated tail tucks below Cambodia to the south-west. For its entire length, slender and rearing, the South China Sea forms an eastern border. On the other side, mountain ranges separate it from Laos in the north-west and west, Cambodia in the south-west. To the south juts the eastern rim of the Gulf of Thailand.

Following France’s military humbling at Dien Bien Phu – and China underplaying Hanoi’s hand in the Paris Talks to which the nation whose fate was being decided was not privy – the 1954 Geneva Conference imposed a demilitarised zone at the 17th Parallel. This cut Vietnam in two. Brainchild of senior generals determined to reunite the country, and often briefing Ho in person on its progress, the Trail began as a smugglers’ route a metre wide or

less. Through it, South Vietnam’s guerrilla resistance to Saigon and Washington would receive small arms and direction from the north (though in truth the Viet Cong did as much nagging and strop-throwing as obeying). By the time Washington withdrew it was a “three lane black top highway” on which tanks, troop carriers and petrol tankers – in short the accoutrements of modern conventional warfare  – rolled victorious into Saigon on April 30, 1975 as the world watched from its armchairs.

(155 miles to the west in Phnom Penh, Pol Pot’s Khmer Rouge had thirteen days earlier seized power. It would soon declare the new state of Democratic Kampuchea, reset the calendar to Day One and plunge its people into a living nightmare. But with the world’s eyes on the “fall” of “South Vietnam”, no one was paying much attention to that development.)

The first cadres and arms supplies reached the south in the summer of 1959. These early trips, on foot and bicycle by way of intricate networks of jungle path and mountain pass, took up to six months and were arduous beyond belief. Many succumbed to hunger, exposure, snakebite – even tiger attack. Most contracted malaria. And then, despite measures to escape detection – smoking bans, camouflage, and mats unfurled to leave no footprints when roads were crossed –  there was the enemy.

It was a key tenet of Kennedy’s advisors – the same guys who’d assured him that, since Castro enjoyed no popular support on Cuba, the Bay of Pigs would be a kick-in – that you defeat insurgents by isolating the battle arena to throttle external support. Given the ease with which the American fleet could choke off significant traffic down the Gulf of Tonkin and South China Sea, and given Hanoi’s lack of air power, this doctrine made the Trail’s eradication a priority for US military advisors up to 1965 and, following LBJ’s commitment of air and ground forces that year, the mother of all headaches (or glory prospect and strategic divide) for every admiral and starred general tasked with bringing Rolling Thunder to a conclusion pleasing to Washington.

Just as serpentine as the country was the trail itself: not just in contour but, like a snake dodging an eagle, in motion too. There was no one trail; rather, an intricate and constantly changing mesh of routes. Inbuilt redundancy was such a key feature of vulnerable points and bottlenecks that their repair and Plan-B substitutions can be likened to the packet-switched disaggregation of emails for separate routing prior to reassembly down the line. Inevitably –again see the map – Laos was dragged in as North Vietnam, aided by a communist Pathet Lao waging its own war on the Royal Lao Government, routed parts of the Trail over the border. Early diversions seldom went in more than twenty miles but America’s overt entry in 1965 brought B52 bombing sorties which forced the trail deeper into Laos: into the Panhandle and Plain of Jars.

Concomitant political manoeuvrings involved four capitals (plus a private war between C-in-C General Westmoreland and US Ambassador Sullivan in Vientiane) and are about as easy to follow as Hegel’s Logic. I’m not going to try but, for light relief, offer this token of the couldn’t-make-it-up  skullduggery in play. Westmoreland – caught between a big fat Congressional no to GIs on Laotian soil and, from across the Pacific Basin, an Admiral Ulysses Grant-Sharp who outranked him and wanted Charlie hit wherever he roamed – urged President Diem to commit South Vietnamese troops in the Panhandle. Naturally, Diem consulted his astrologer, whose charts bespoke zero heavenly fortuity. Undeterred, and unbeknownst to Diem, the CIA then had the star-gazer (God only knows what they threatened and/or promised) look again at what the zodiac was saying. Diem ran with the new, Westmoreland-friendly reading: but history suggests those astral charts had called it right first time.

Phnom Penh’s embroilment is rather more opaque, though the consequences are better known. Where a glance at the map shows Laotian neutrality to be a lost cause from the outset, it’s less cartograph­ically obvious what Cambodia had to do with things. A couple of likely answers are that (a) B52 bombings and GI-directed Montaignard harassment in the Central Highlands forced Charlie into wider diversions; (b) the importance of a second trail, from Sihanoukville in Eastern Cambodia down to the Mekong Delta south of Saigon, was overestimated by the Pentagon and CIA. Whatever the truth, the covert bombing of Cambodia – product of Nixon’s belief, famously voiced in that  interview with David Frost, that US law was what the President declared it to be – dropped more tonnage than in all WW2 theatres combined: creating the conditions of mass hysteria in which a tiny, lunatic sect could seize power with unforgettable consequences.

No, not Islamic State! That’s a later chapter in the ongoing saga of overwhelming force in bed with self-serving stupidity …

Bottom line? For all the tactical intricacy, conspiratorial nuance and political ramification, the Ho Chi Minh Trail has at its heart a bold simplicity of import. It was the umbilical cord of resistance, maintained more by rice farmers than Moscow trained engineers, that the mighty United States could neither sever nor choke. It was the nemesis of two governments themselves not long shot of French rule. It was the two-steps-removed antecedent of Pol Pot’s reign of terror. And like the tunnels of Cu Chi, of which I’ve written before and may do again, it bears witness to the human spirit by way of the ingenuity, determination, ruthlessness and sacrifice embedded in every mile of its snaking paths.