Yesterday’s elections give the Labour right little real ammo in its dirty war on Corbyn. The worst showing was in Scotland but that was (a) inevitable given SNP ascendance and (b) like that ascendance a product – we can validly infer this from the demographics of the 2015 general election and the 2014 “Yes” surge – of New Labour’s espousal of ‘austerity’. Such truths will not, of course, prevent anti Corbyn forces and centrist media from lining up to trash the man. This from Guardian political editor Anushka Asthana today:

The results are terrible in Scotland, where the SNP’s dominance has barely been dented – and Labour could even be leapfrogged by the Conservatives. This should not be underestimated, given that Scottish voters should be more attuned to Corbyn’s brand of anti-austerity opposition

How much political nous does it take to be a Guardian political editor? The fact Corbyn won the leadership by the biggest landslide in the party’s history did nothing to stop its establishment careerists – such is their contempt for the rank and file – seeking to undermine and ultimately unseat him. Is Asthana seriously saying Corbyn’s victory, which his many and well placed foes have done all in their power to make hollow and precarious, should already  have undone New Labour’s self inflicted and quite possibly terminal damage north of the border? That within a few short months Scotland would not only turn a blind eye to years of ‘Red Tory’ austerity but a deaf ear to the here and now vilification of Corbyn, and his consequent precarity of tenure? That Scots would now heave one mighty and collective sigh of relief?

Och aye and phew! Nightmare over. Let’s all gae back tae Labour.

John Mann, one of Corbyn’s fiercest critics who clashed publicly with Labour’s Ken Livingstone at the height of the antisemitism row that has gripped the party for over a week, said Labour was “going OK”, while admitting that Tory feuding ought to have his party winning by a landslide.

Wrong, Ms Asthana. Mann is not admitting  that Labour should be doing better. He’s deeply frustrated by the fact that, under Corbyn, it hasn’t done demonstrably worse.

Thing is, had Mann – and Tristram Hunt, Chuka Umunna, Mike Dugher et al – the courage of their convictions they’d be challenging Corbyn for the leadership. Or have they concluded he’s not yet – even after the suspension of his most high profile supporter, and the announcement of a backfooted and draining “inquiry” into antisemitism in the party – sufficiently wounded?

In light of the methodically timed and coordinated traducing of Shah and Livingstone, the real target being of course Corbyn and what he represents, I recommend Open Democracy UK’s interview of three days ago with Norman Finkelstein. Two things you should know about this man. First, he’s an American Jew whose family, both sides, died at Auschwitz and Maidanek. (Or else were executed for their part in the Warsaw Uprising.) Precisely because of his family history he is fiercely pro-Palestinian and anti-zionist. Second, it was from his website that Shah took the cartoon which jokingly argued for transplanting Israel itself – its exact size, borders and shape – to the USA. Admittedly, the image does host the line “Transportation cost will be less than 3 years of defence spending”, which, when uprooted from context, shifts from comic impossibility to theoretic and historically resonant possibility. That’s why context matters, and why ignoring it, whether through the laziness and know-all pontifications of self appointed arbiters – useful idiots all – or the machinations of Zionists and the Labour right, does such damage. 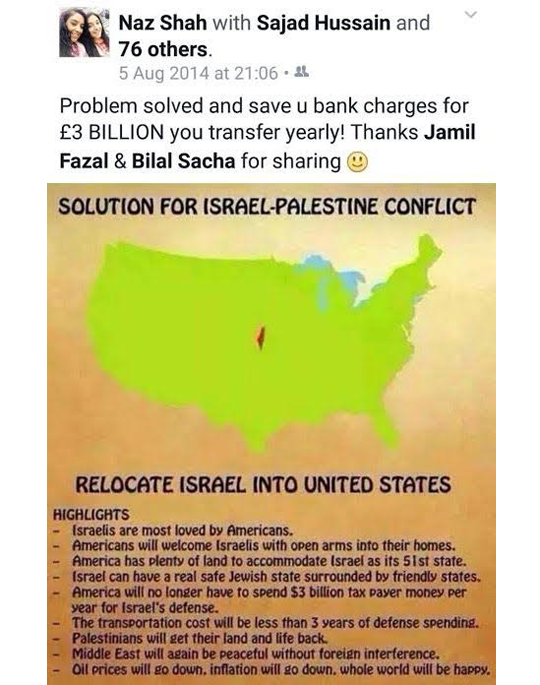