I stop outside a jeweller’s to fit my wide angled lens. Out pops a dapper dude in his fifties. He sports stylishly coiffeured grey locks, pressed white shirt open at the neck. His silk tie – greys on white diagonals to draw together shirt and barnet – is loose knotted for a look of rakish panache few men his age could pull off. Elegant, slim, chinos falling away from buckled waist; he has the air of a premier league manager on a roll: José Mourinho without the scowl.

Would I care for chai? Well I’d love to; the man intrigues me. But with sun going down and time against me – I want to end the day with an atmosphere shot – I must decline and get my skates on to a west facing gap in the shops and office blocks three hundred metres down MI Road, one of Jaipur’s busiest arteries. If I step on it I can still make the picture. He has a better idea.

“We can go onto my roof. You will get the best picture there.”

He’s not wrong but that’s the least of it. Also on the roof a gang of Muslim boys in caps and Friday best play football. They rush over, crowding us and eying my camera. Can I photograph them? The man I now know as Abdul arranges them all around his lean frame. 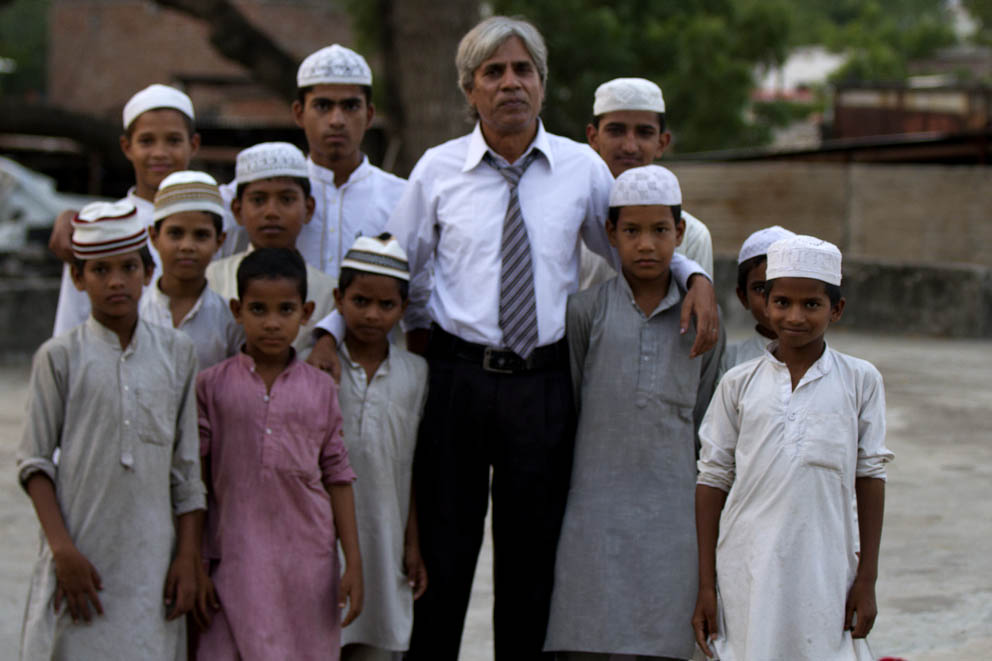 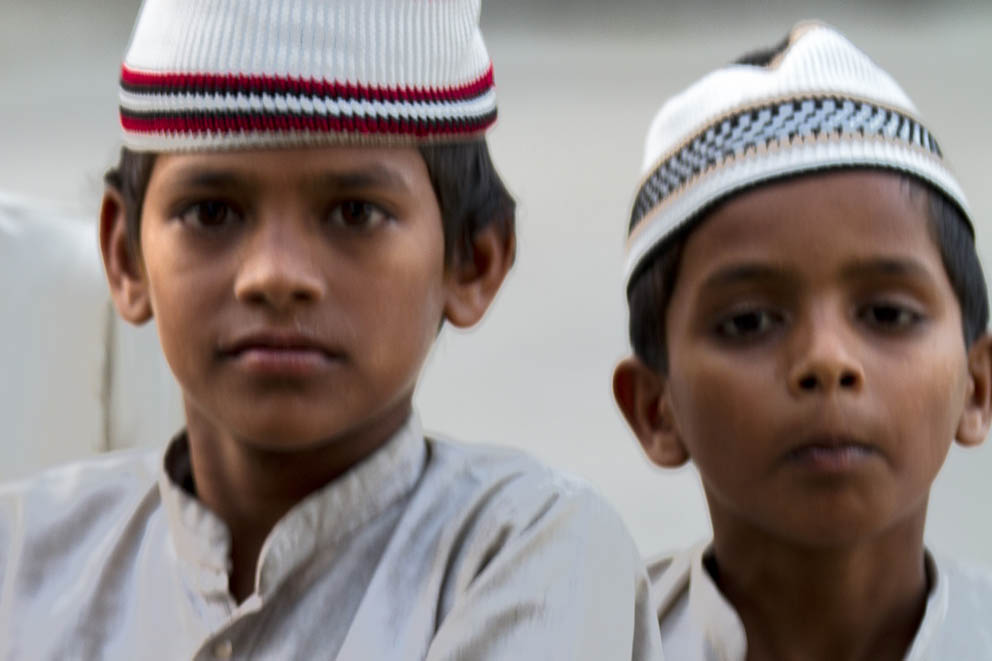 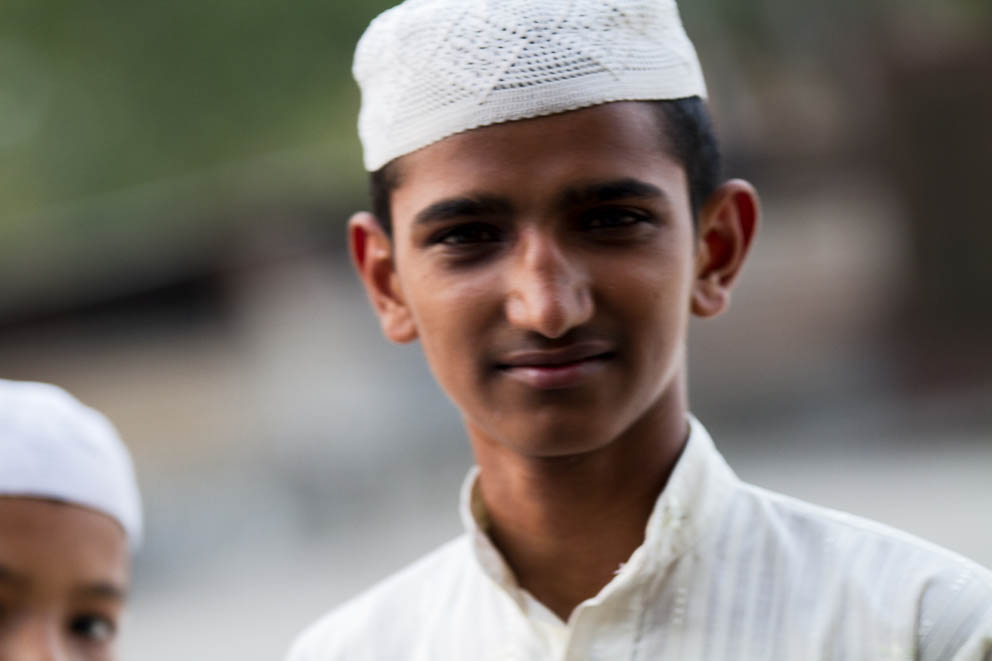 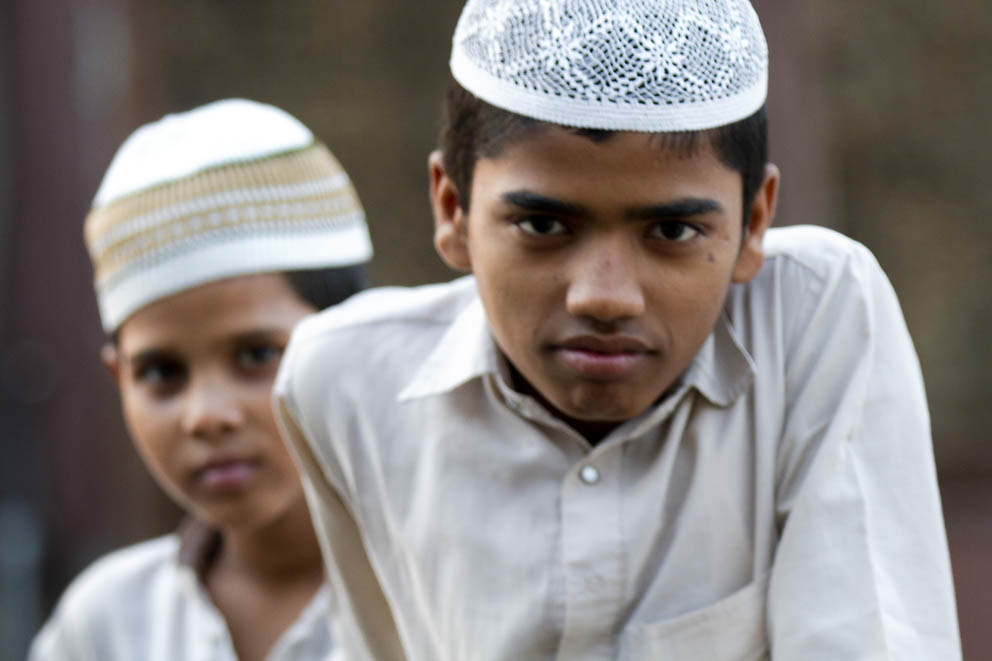 As I take the group shot, then a few close-ups, I feel fingers at my back-pack. I spin around to eyeball the little monkeys with gaze magisterial. They smirk back the way ragged-arses do the world over. I’m wary but it’s hard not to laugh. “From very poor homes”, Abdul tells me, as if I needed telling, on our way down to street and shop for the promised chai.

Inside the jeweller’s it’s air conditioned paradise. A portly bloke – all cap and glasses, beard and flowing robe – sits reading a paper. He is Mister Firqaan and his look of the Holy Mo is, I will learn, a fair reflection of his world view. But as I will also learn, Mr Firqaan is impossible not to like and respect, for all his ponderous piety.

Behind the counter is one of those paper-white Indians you see from time to time: throwback, perhaps, to some British subaltern playing away back in the day. He has a kind face and sweet smile. Next to him stands Aslam, who reminds me – and here too I will discover the look to be not entirely deceptive – of the irrepressible Bob in my favourite white trash feel-good movie: Rita, Sue and Bob Too.

Aslam poses. Click. I turn the lens on Mister Firqaan. Click. I have the shot before he’s noticed. “Actually”, he tells me in slowly assembled syntax, “I don’t like to have my picture taken”. 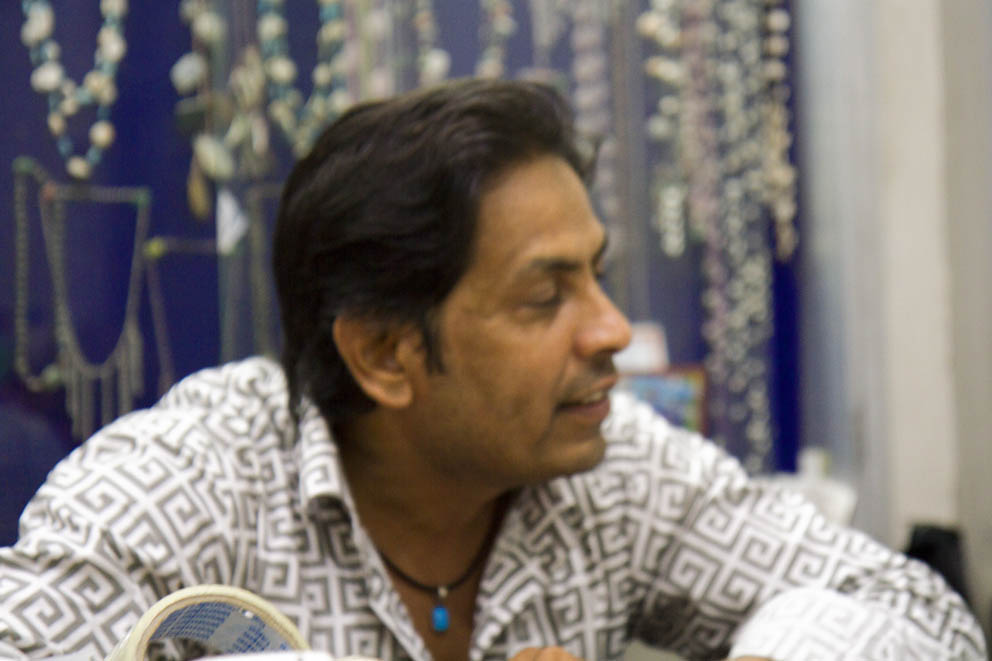 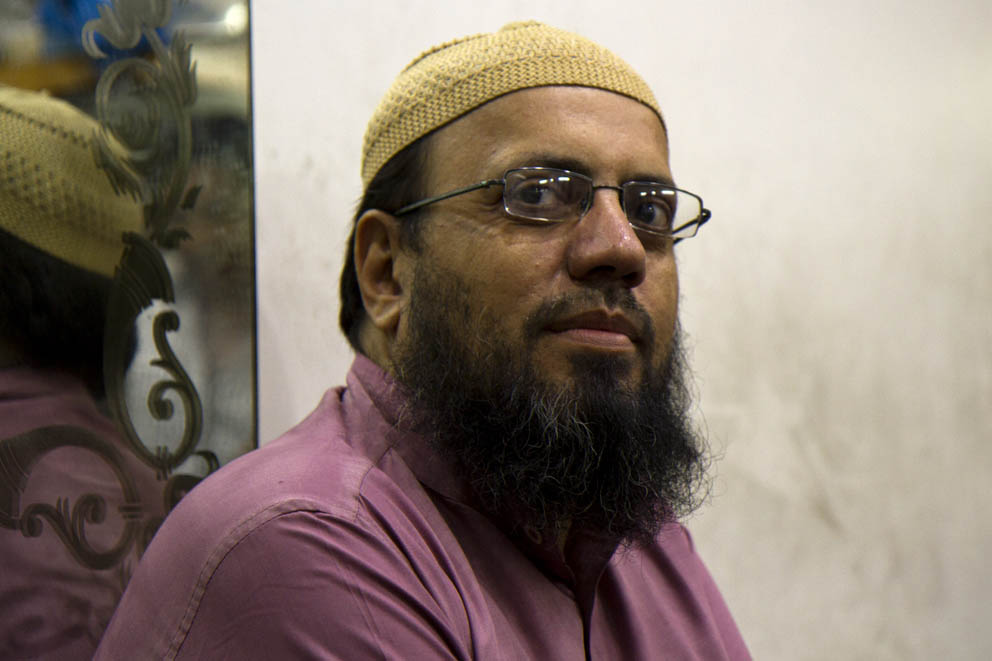 I give immediate apology and make to delete the image but this is not what he wants. What Mister Firqaan sees here is an Allah-sent opportunity to set out at length why one as devout as he objects to being photographed. But on that score he’s clean out of luck since the sharper Aslam, whose better English puts him still further ahead, leaps in with the true reason.

“One day a tourist took his picture and later Mister Firqaan saw it on German television, with a sign saying he is a wanted terrorist.”

The deadpan delivery has me fooled a moment. For his part Mr Furqan didn’t get what was said but did note Abdul splitting his sides across the room. He asks for a translation, gets one, and comes on all reproachful disdain; a more-in-sorrow-than-anger look that serves only to up the merriment. 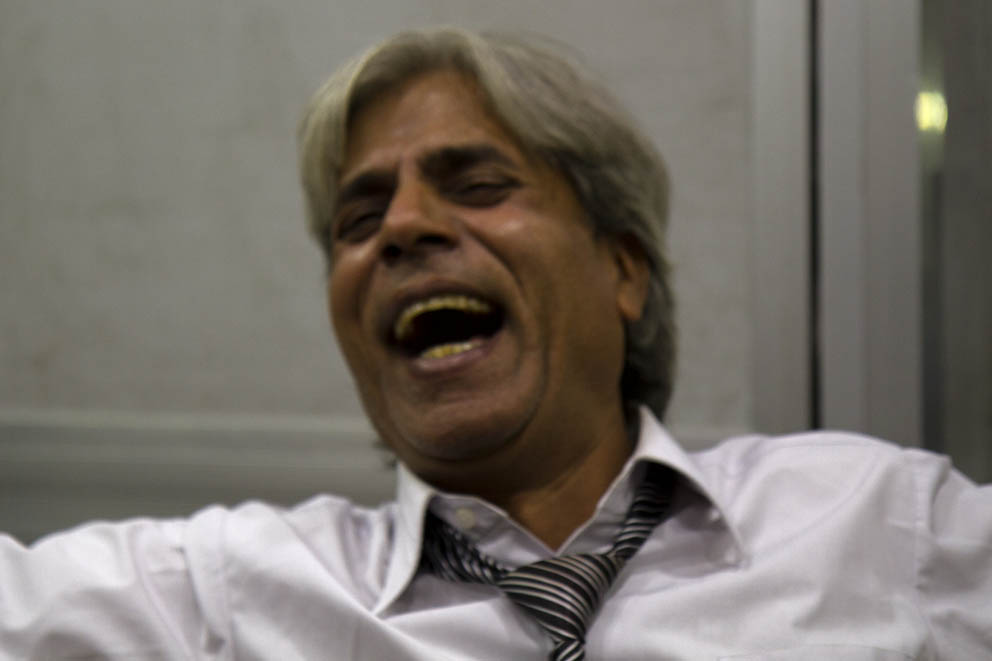 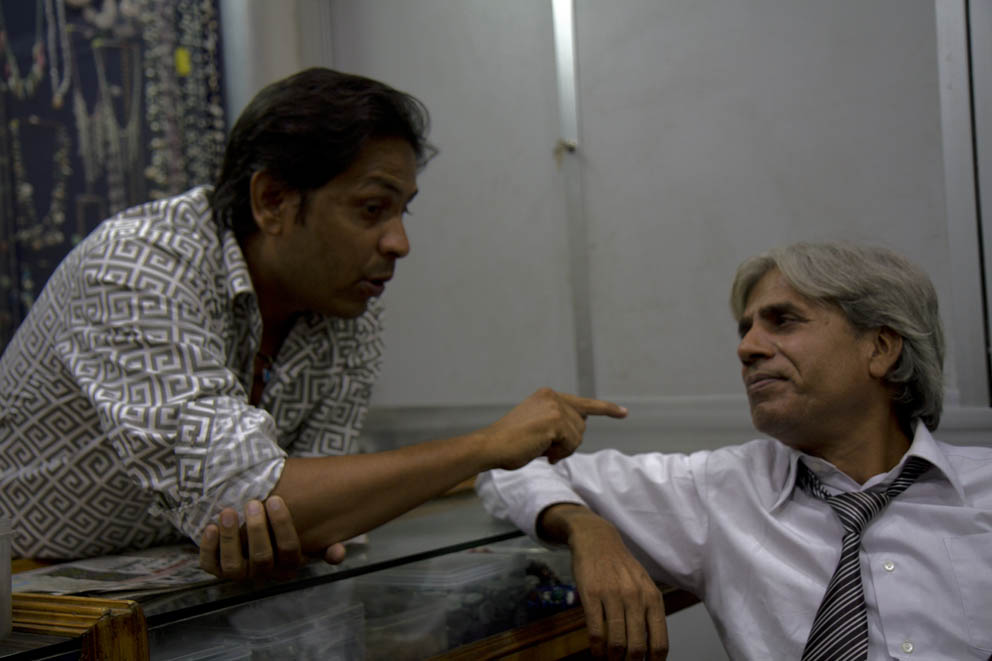 Turning back to me, Mister Firqaan explains that the Holy Quran explicitly forbids photographs of God’s human creations. Now it’s possible – just – that I might by dint of heroic renunciation have kept a straight face here. Alas, from corner of my eye I see Abdul and Aslam doubled up.

I’m not speaking figuratively. We refer often to someone shaking with laughter but, till last night, I never knew how accurate a picture that can be of tears down your cheek, spit me in the eye and piss in your pants hilarity. First in the Urdu/Hindi creole common across northern India, then in English, Abdul expresses grave doubt that a seventh century text would make specific and proscriptive mention of photography.

Mister Firqaan is less amused. Again he makes with the sorrowful look, eliciting more howls of belly laughter, before turning once more to me. By ‘literally forbids’, he says, he didn’t literally mean literally …

… and of course I help him out. For all the wicked ribbing I can see not only that Mister Firqaan is a kindly man, even if he does need to lighten up a little, but that there’s a lot of love in the room. These are old friends and I’m blown away by my staggering good fortune to be here to share such a moment.

Moral? Sunsets come and sunsets go. For one such as me, people are or should be the alpha and omega of travel.

Raised in one of the other two Abrahamic faiths, I’m sufficiently au fait with the rules on graven images to know where Mr Firqaan is going with this. Even the implied swipe at Hindu idolatry is without malice. How do I know? Because within minutes this seriously devout man is telling me that in His Almighty Eyes it matters not if you’re Sunni or Shia – yes, that particular followed as night on day given the line of inquiry – or Sikh, Buddhist or non believer like me. What matters, he insists – and now there’s no denying a quiet forcefulness of character below the pedantic veneer – is that His Children on Earth strive for these three things:

Our hands do the double clasp as he excuses himself to pray.

2 Replies to “Photography and the Holy Quran”