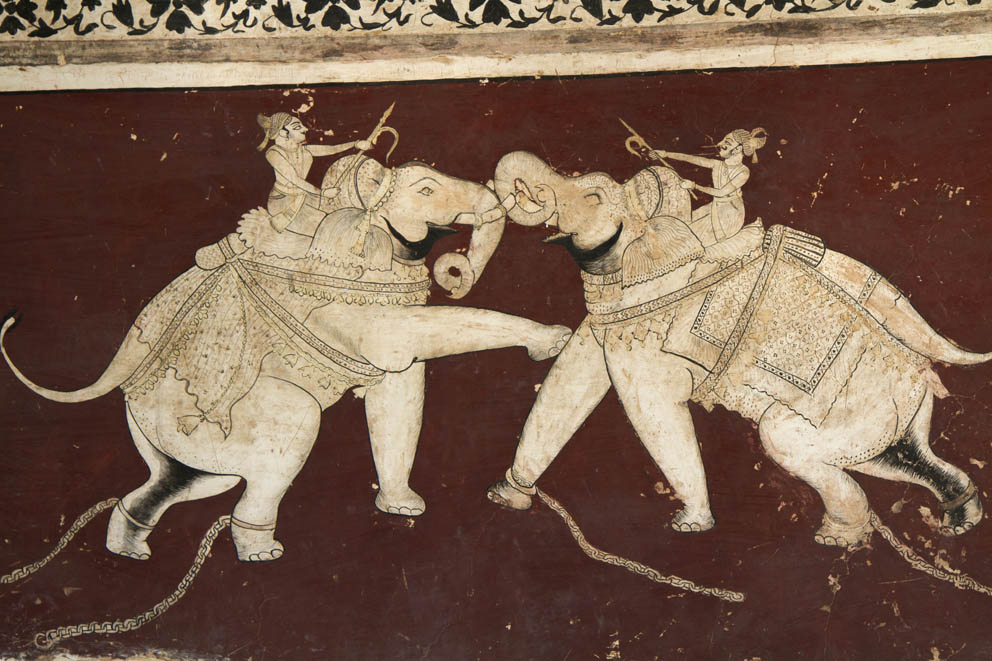 By the lane leading sharply up to Bundi’s Taragarh Fort, a large mesh basket houses a dozen or so rough sticks. I know why they are there. I know too that the man who cut them charges a few rupees for the loan but he’s nowhere in sight. I take one anyway, then sit on a wall in the shade to await eight o’clock, when fort and palace will open shop. 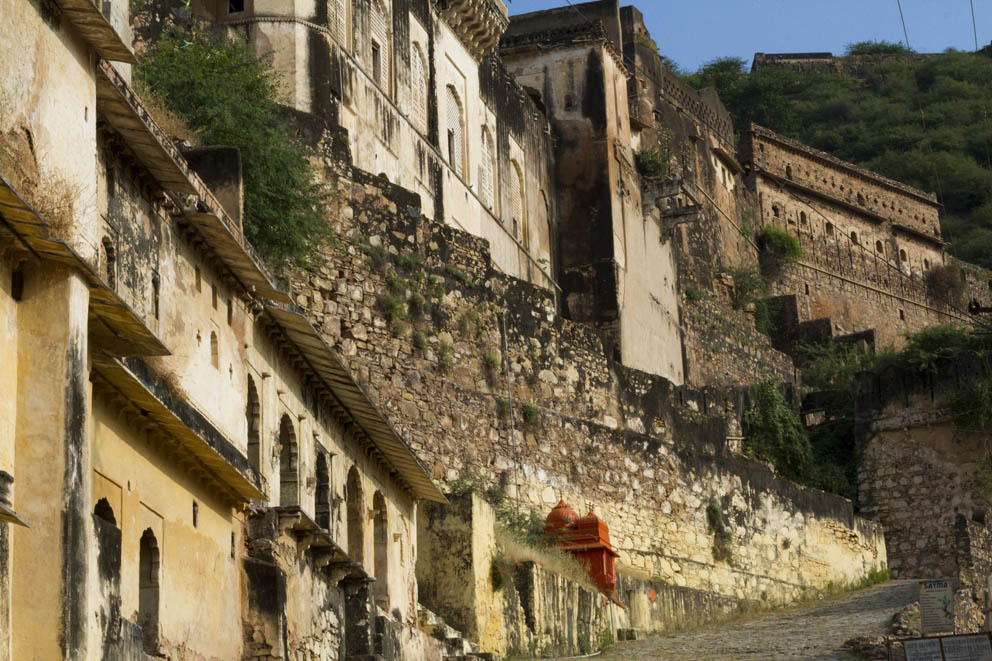 ‘Garh’ means fort; ‘tara’, star. Star Fort was built by Rao Bar Singh in the mid fourteenth century, a time of intense pressure from a Delhi Sultanate itself soon to succumb to the Mughals, who would oversee the second largest empire – excluding those externally based, like Alexander’s and the British Raj – ever to rule the subcontinent. In a city cradled by mountains, Singh chose a hill to the north west, overlooking its picturesque lakes and blue hawelis. The fort has three stone water tanks which never run dry, their construction a mystery that speaks volumes on medieval India’s advanced engineering know-how, but given the scorching climb ahead I’ll do well to secure my own supply. By the time I’ve found a shop and returned with a litre of the stuff, Taragarh is ready to trade. Yet there’s still no one to take money for the stick.

I take my time in the palace, sited lower on the hillside than the fort proper. The place is less impressive in the detail than in its size and eagle’s lair location above the town, in its warren of rooms and passages and in the chiaroscuro play of light and shade on worn stairwells that use every trick in the book of natural illumination. Nevertheless, I linger over a gallery of passably well preserved wall reliefs – depicting heroic deeds against the Marathas, the mighty Mughal Empire and of course rival Rajput kingdoms – to meditate, as one does at such times, on the martial qualities of pachyderms.

Elephants are big in Rajasthan. OK, they’re big wherever they are, and bigger still in Africa – where for practical reasons that have little to do with greater build and aggression, they have been less domesticated – but I refer not only to physical size but the fact they loom large in the state’s history and in the imaginings of its peoples; their lore and songs, the fabric of their dreams. In the beautifully executed wall friezes outside any prosperous haweli, they are by far the most depicted animal. Where others get a look in, they are auxiliary – war horses as back up, say – or there to be hunted and killed. 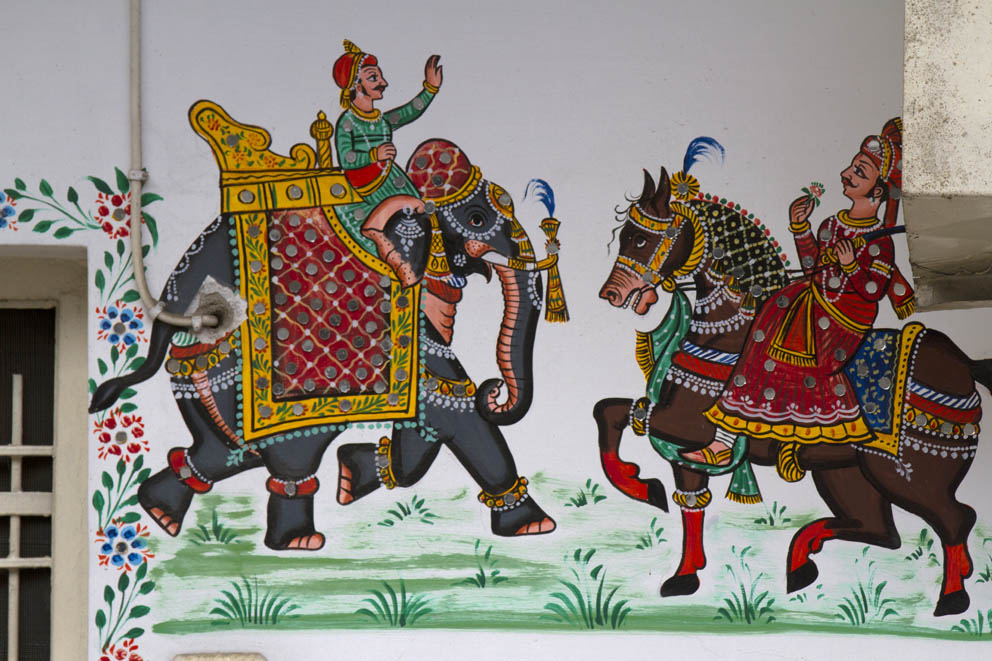 Elephants – used by the Romans, by Hannibal and by rulers across the Indian subcontinent and South East Asia both – offer unique military advantages. Like horses they can be trained to be fearless in battle but unlike horses, which will always step over a man on the ground, can also be trained to trample soldiers to death. They can be used as battering rams, hence the studding of the huge gates into palace and fort with lethal iron spikes to persuade elephants without an invite to find some other door to stove in. And of course they can carry or tow loads no equine could shift. But accruing from all of these practical qualities, the whole greater than the sum of its parts, is something more subjective and symbolic. He who controls the elephants sends the message loud and clear that he is the mightiest of suzerains.

Which is why those many wall paintings here and in Udaipur depict them not only in battle but in pursuit of Asia’s other fearsome beast, itself an icon of savage invincibility. “See how mighty I am”, they not so subtly imply. “Even the Bengal Tiger must yield to my power!” 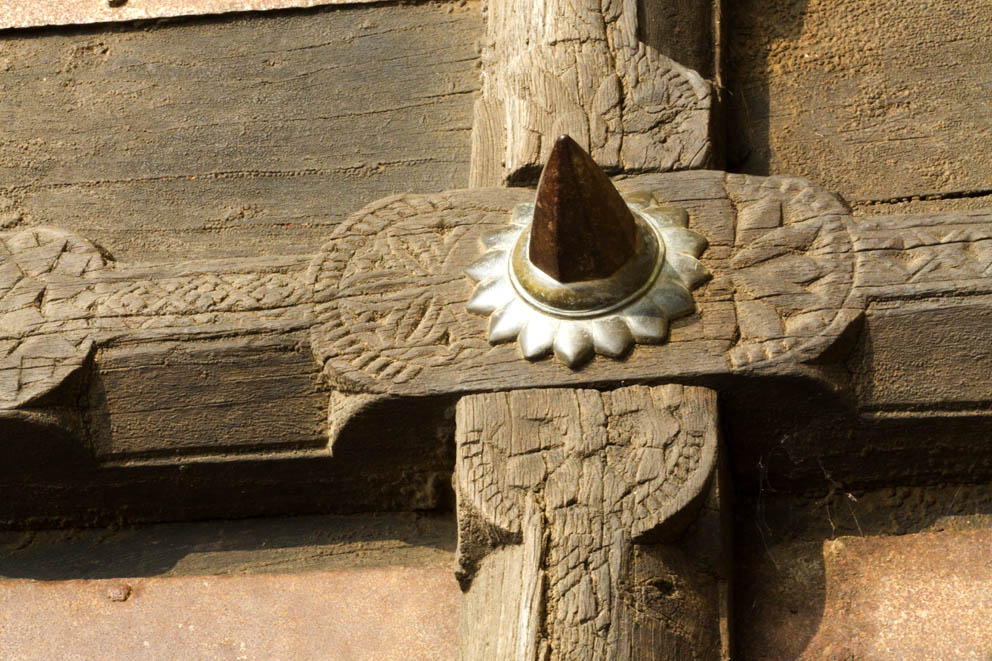 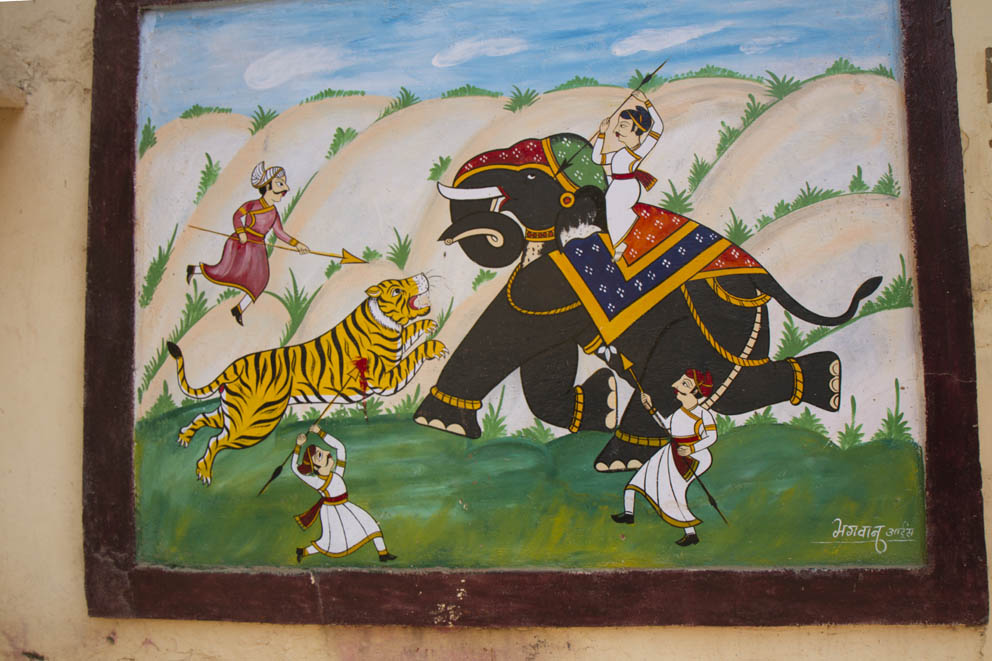 For much the same reason, elephants have a long and documented history of use as agents of execution and torture. Crocodiles, dogs and even – if Robert Harris is to be believed in his best selling Pompei – moray eels have been used in this way but here too elephants refresh the parts other beasts cannot reach. Their intelligence and trainability mean they can despatch a convict instantly or, at his/her majesty’s pleasure, extend his anguish by hours and even days. Akbhar, one of the most prominent and fair minded of Mughal Emperors, would show his magnanimity by having an elephant gently roll a bound villain – typically found guilty of sedition, murder or tax evasion – around, in one documented case for five days, and then set the man free. Recidivism rates after such an ordeal are not available, but I’d guess were low.

It’s a blistering climb from Garh Palace to Taragarh Fort, with many stops for water. No one is around as I enter a crumbling portal, noting again the iron spikes in what’s left of the heavy timber gates. A small troop of red monkeys, young male adults or I’m the Nawab of Pondicherri, sets up a chorus of sustained and intimidating screeching, with visuals to match: fur raised, arms awhirl like Shiva the Destroyer’s, and feinted attacks. I’ve been ambushed by monkeys before and it’s not funny, even before you factor in the rabies angle, but I didn’t bring this stick purely as a walking pole. A few sabre rattling swishes, with hefty taps to the stone work at the point most likely to see one or more leap down onto head or shoulders, do the trick. They don’t back off but nor do they follow as I pass through the zone of greatest danger. I don’t make the mistake I might as a young man have made. Chuffed I may be with my no-nonsense style and its result but I don’t turn to treat them to a dance of unseemly jubilance. That would be childish and anyway monkeys are an advanced animal. I’ve seen them in other contexts taking risks with no obvious pay-off beyond enhancing their standing with the guys (and all that follows from that). Why needlessly provoke such an animal, and on his own turf?

Not that the stick is just for stopping monkey business in its tracks. The fort area, overgrown in places, is known to be infested with snakes. I’ve nothing against snakes but they don’t know that, do they? Every other stride, while still predominantly wary of simian ambush, I give the ground a firm tap, politely inviting Mr and Mrs Cobra to sling their hooks for an hour or so. No big ask, is it, given the exertions of the climb and the fact I parted with two hundred rupees for the privilege, with another hundred to bring my camera?

They’ve opened for Dylan and appeared on Jools Holland. Now they’ve only gone and made SCS tune for the day! The Raconteurs, folks, with Old Enough