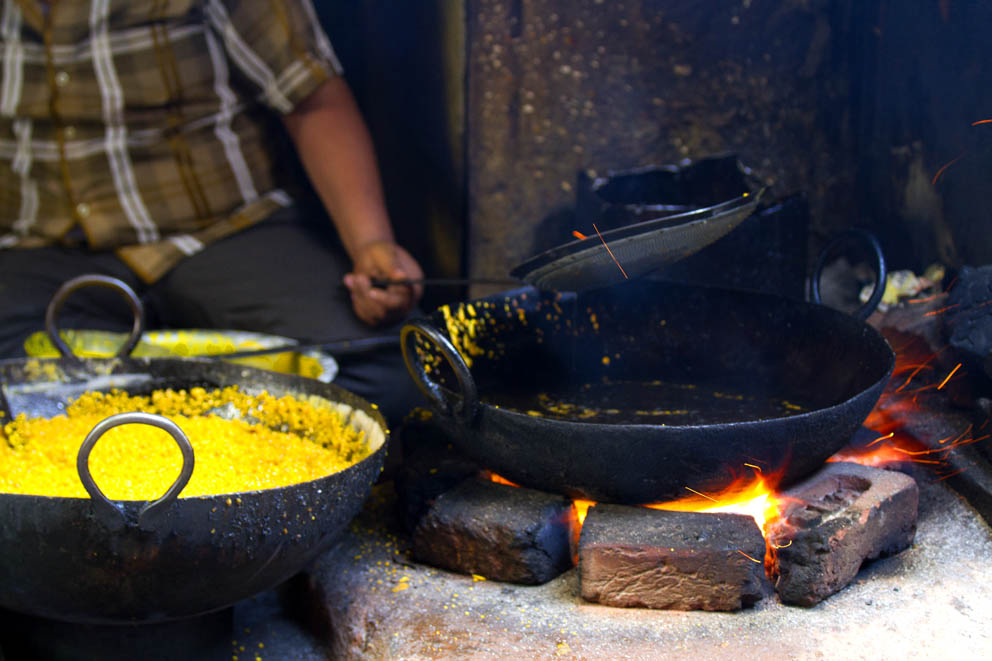 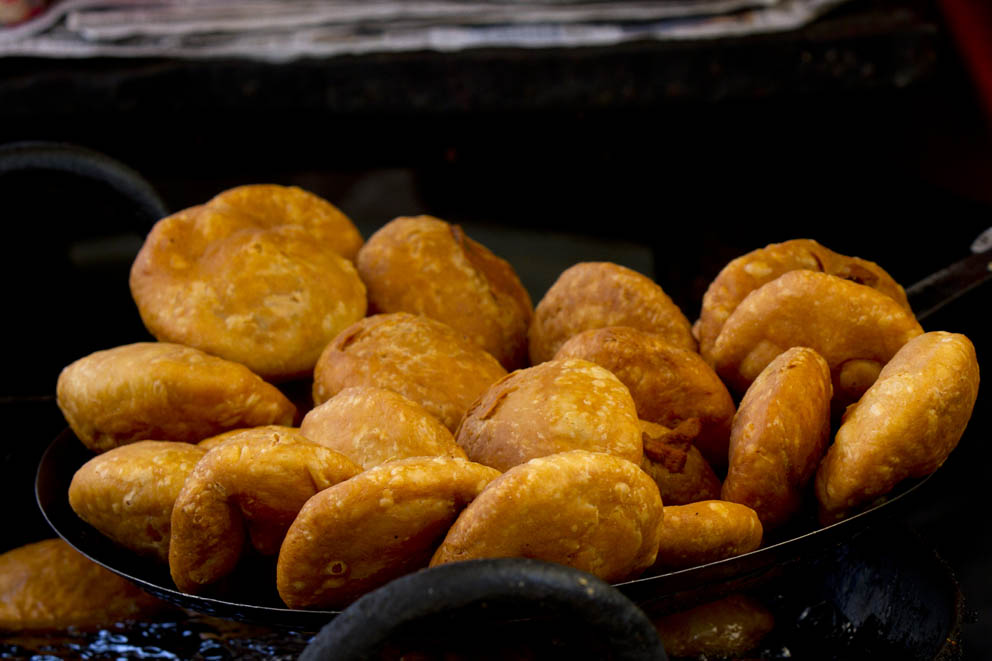 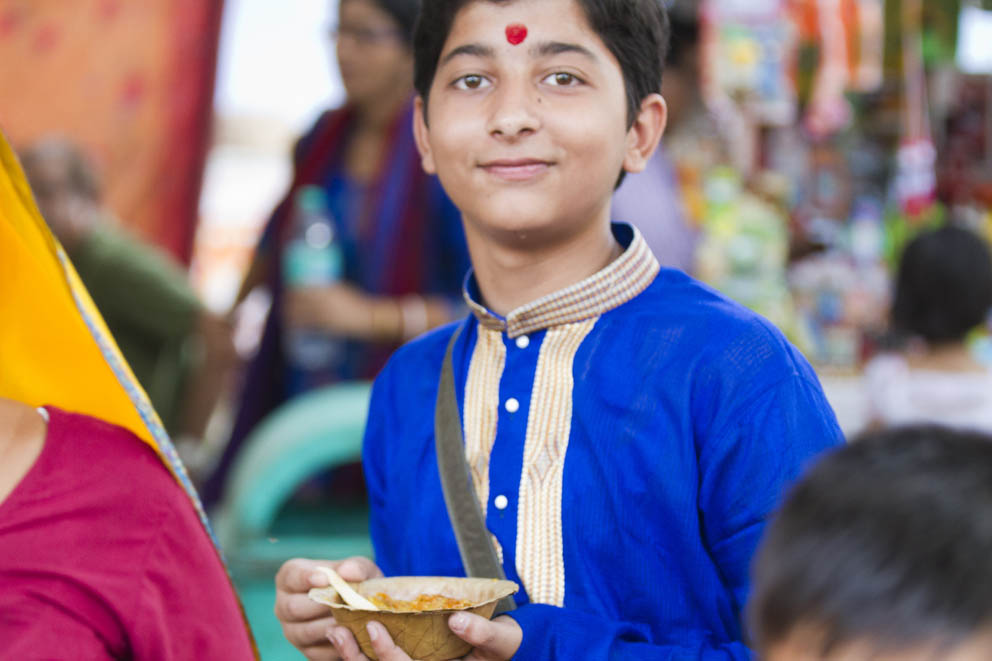 This outdoor cafe does the best street food in Pushkar. I found it on my first morning at a busy intersection in the bazaar. In the countdown to the festival of Dussehra, middle class Indians from Delhi and Agra join locals in frequenting this place above all others. Me, I’ve eaten here every day; pakora, samosa and battered chillhi served in bowls made from dried woven leaf and topped with mega helpings of hot sauce. Delicious, and the place is always busy. I leave full every time, for thirty or thirty-five rupees at eighty-five to the pound, sixty-five to the US dollar. Though not more than fifteen metres square, including fires and seating, I’ve never seen fewer than five men working the joint. 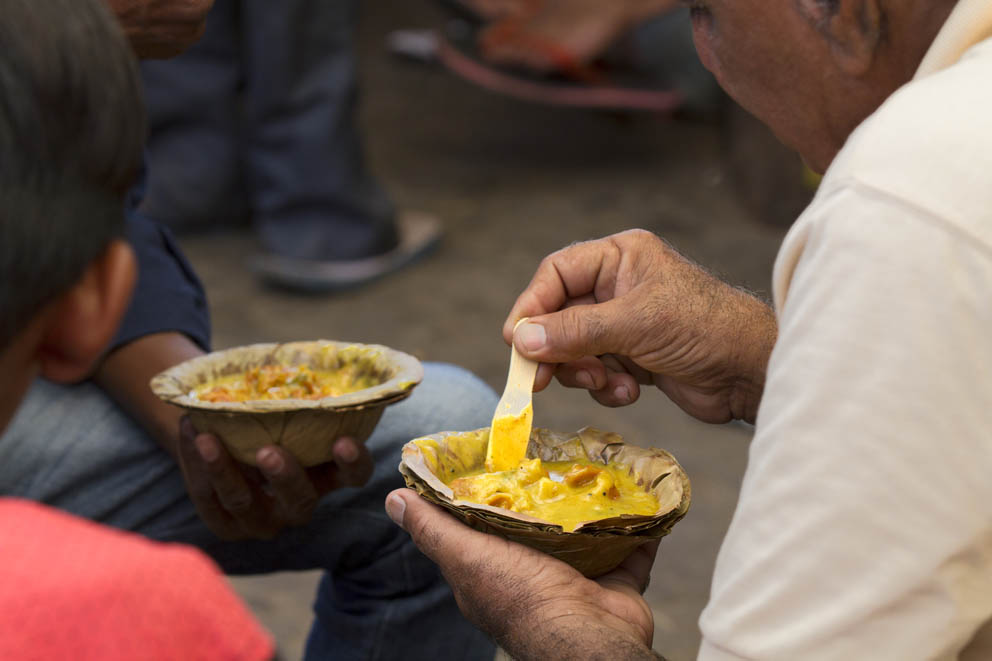 There’s Odd Job, who specialises in mixing the batters and overseeing the deep fry operation. Odd Job stands barely five feet tall but is powerfully built and the only one to sport a traditional dhoti – the others wear western style clothing – which bespeaks strength of character in the most bandy-legged man I ever clapped eyes on. He’s usually wearing a bland expression but when I catch his eye always gives a smile. Here he prepares batter for an evening gig sure to be busier than ever on the final, climactic night of Dussehra. 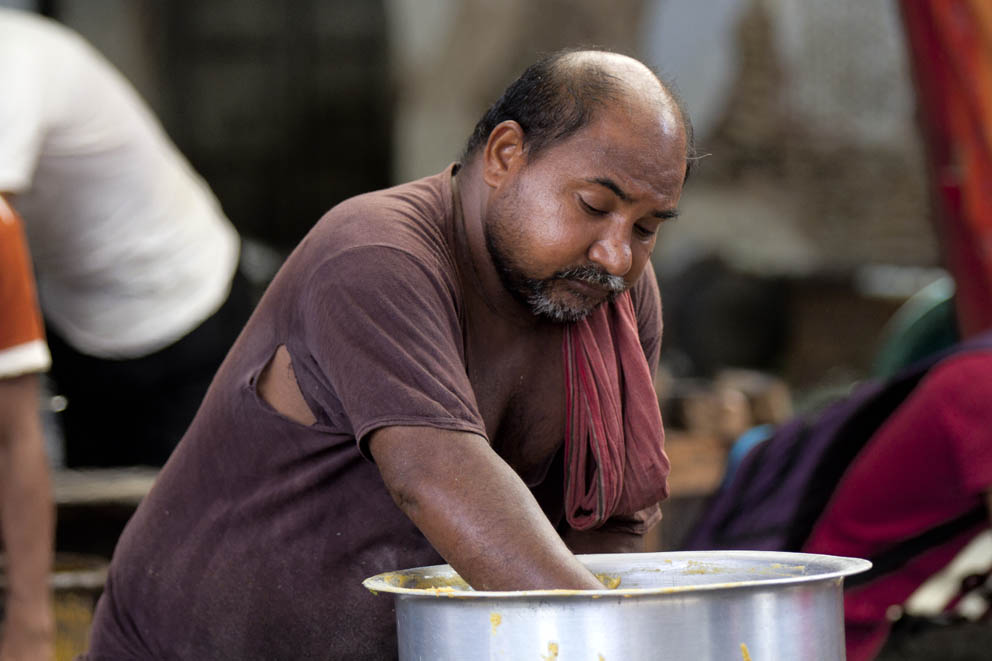 And here he is at the wok: 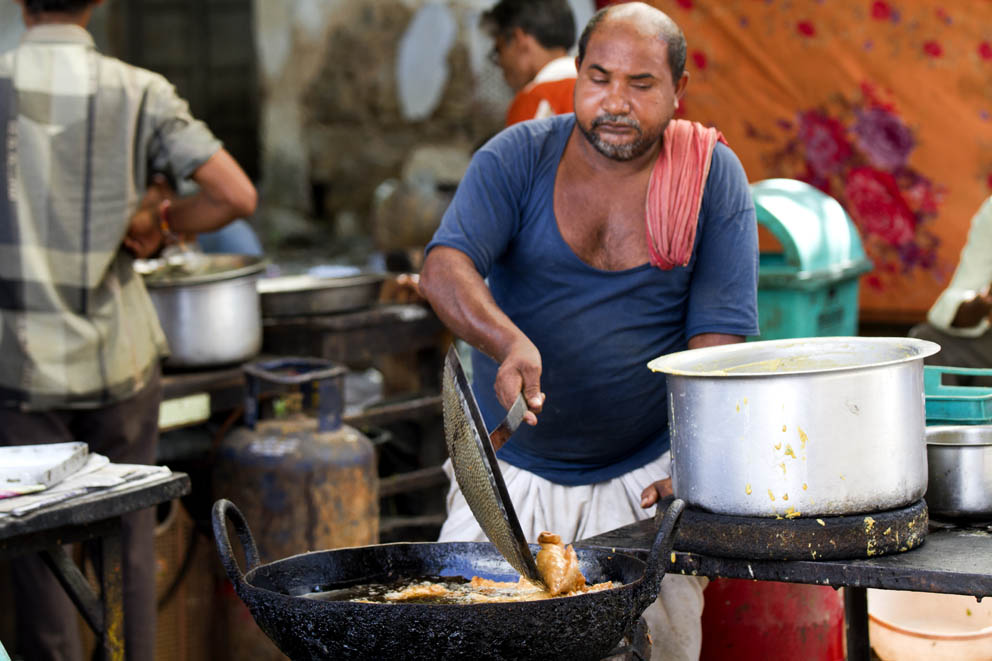 Then there’s Gerry Adams, a cool head in a crisis; a fixer to be relied on to do whatever needs doing. I never saw him take orders; he just sees problems in the making and inserts himself with Jeeves-like efficiency into the solution scenario. Gerry is even shorter than Odd Job, well under five foot and without the sumo wrestler build, but specs and hair-do, and knack of heading off trouble before it gets here, lend an air of gravitas. He sees everything, that sober expression breaking into a radiant beam whenever he spots my lens. 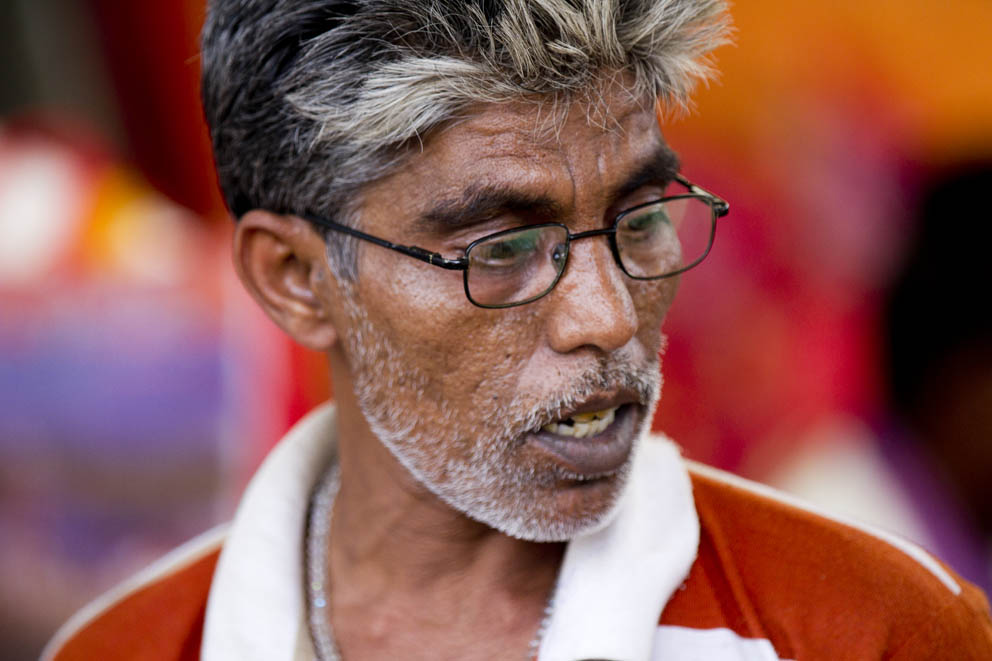 Here he is serving chai, after the late morning samosa rush: 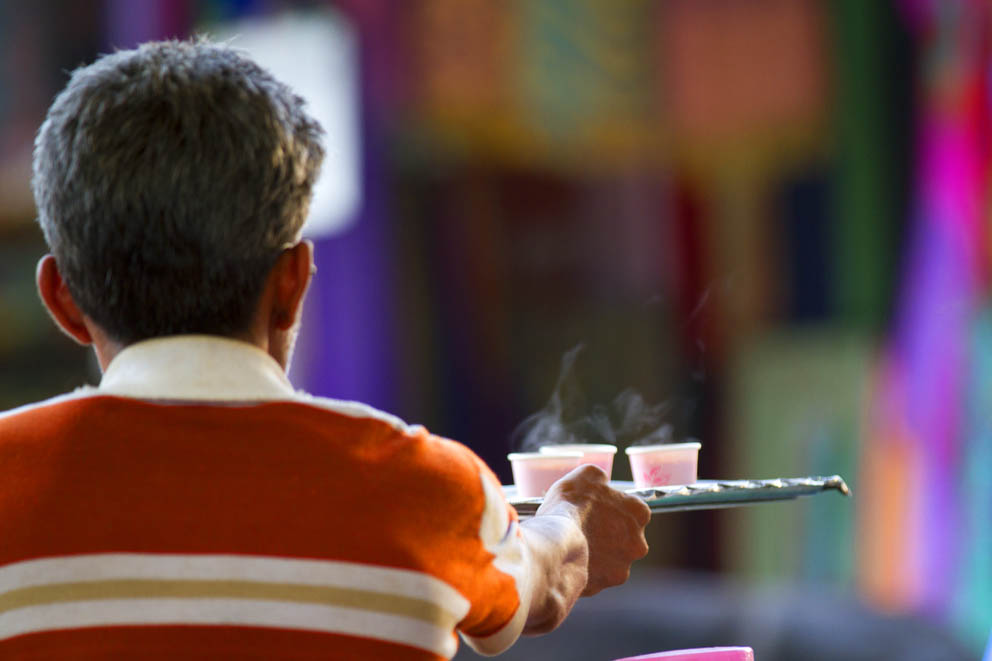 To be accurate, The Accountant is no more or less likely to handle cash than Gerry Adams. I call him that because he sits high up, cross legged, in the way of traditional Indian money counters. His main job is to ladle sauce onto the pakora, samosas etc, once Scissors Man has placed them to order in the leaf bowls and cut them to bite size pieces.

I could show The Accountant’s face but then I’d have to kill you. 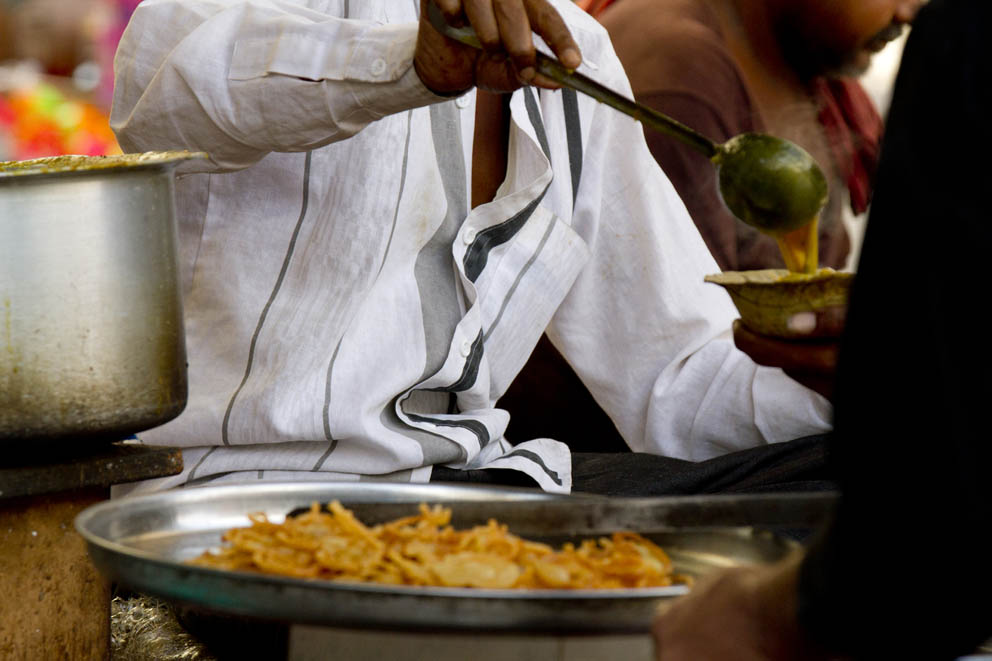 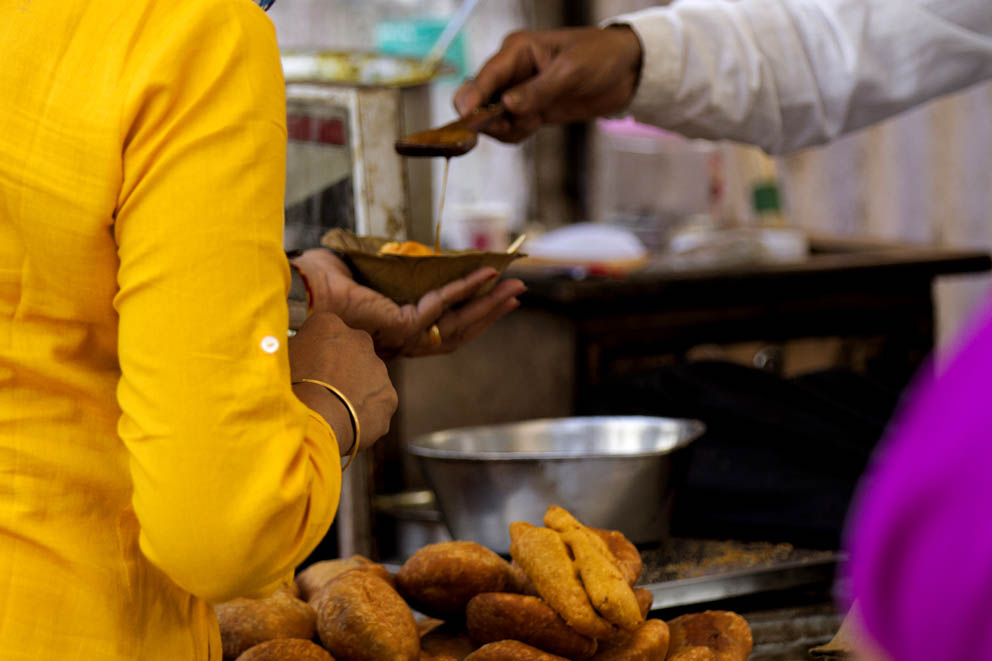 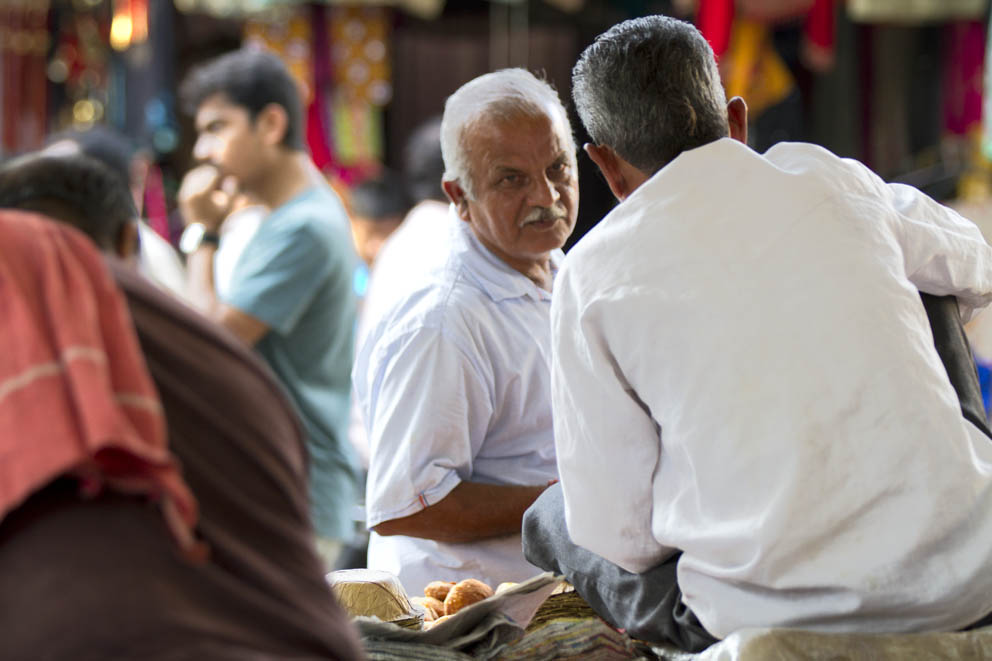 But this is too small a business for rigid division of labour. Here The Accountant loads a bowl with battered chilhi before passing it to Scissors Man, who’ll pass it back when its contents are good and snipped and ready for the sauce. 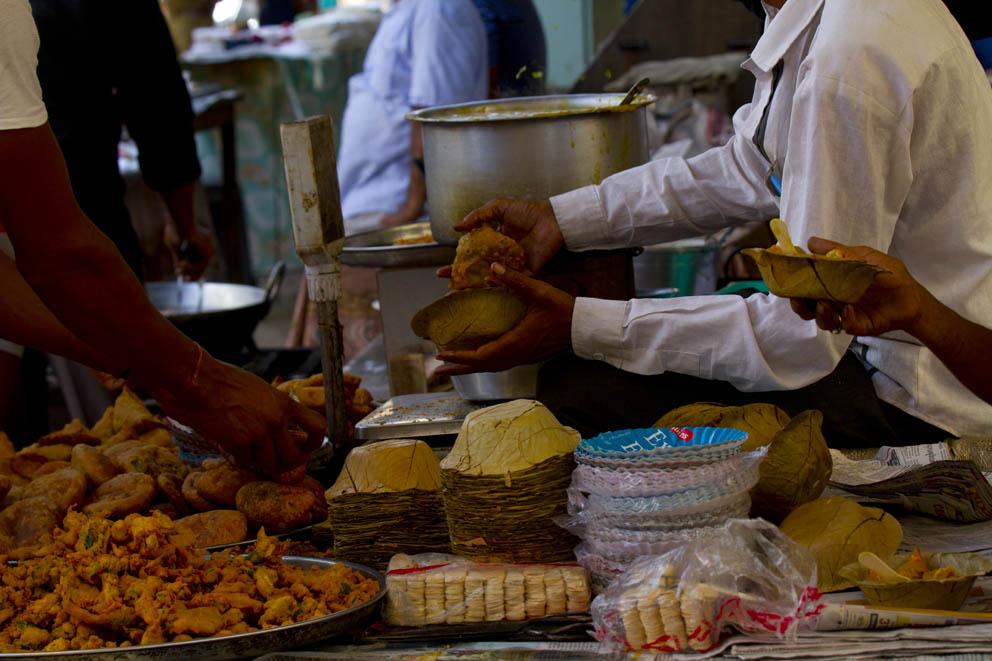 Speaking of Scissors Man, here he is in a rare moment without the tools – which back in the day would surely have been manufactured in my home town – of his trade. 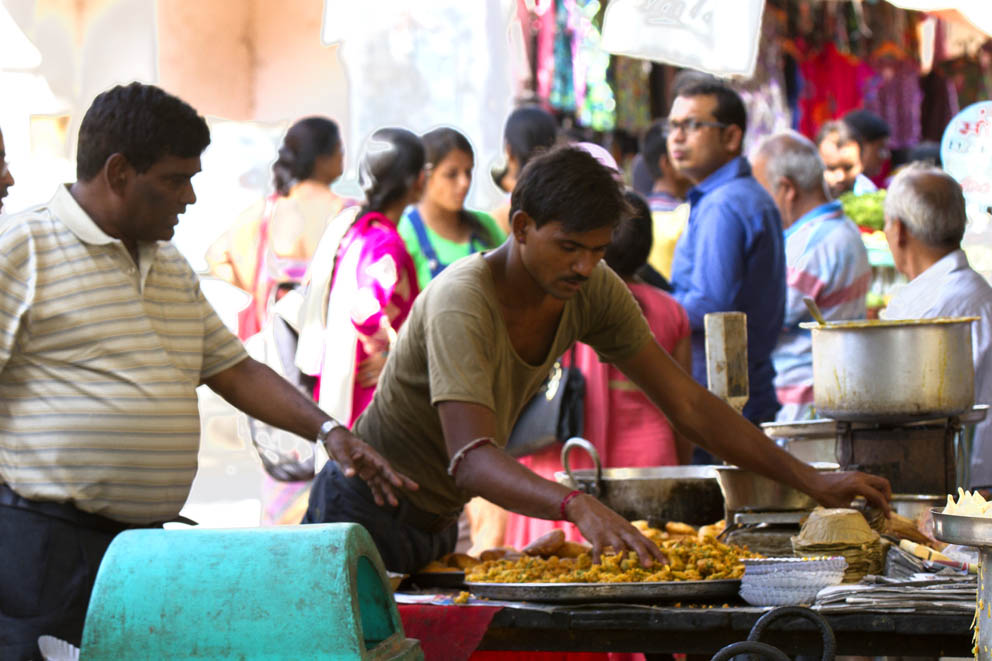 Should Quentin Tarantino ever direct a Bollywood movie, he could do worse than cast Mean Motherfucker as villain in chief. Over five days of keen if intermittent observation I never saw this giant crack a smile. I’m not sure his features know the moves. You wouldn’t want to mess with him. Really you wouldn’t. 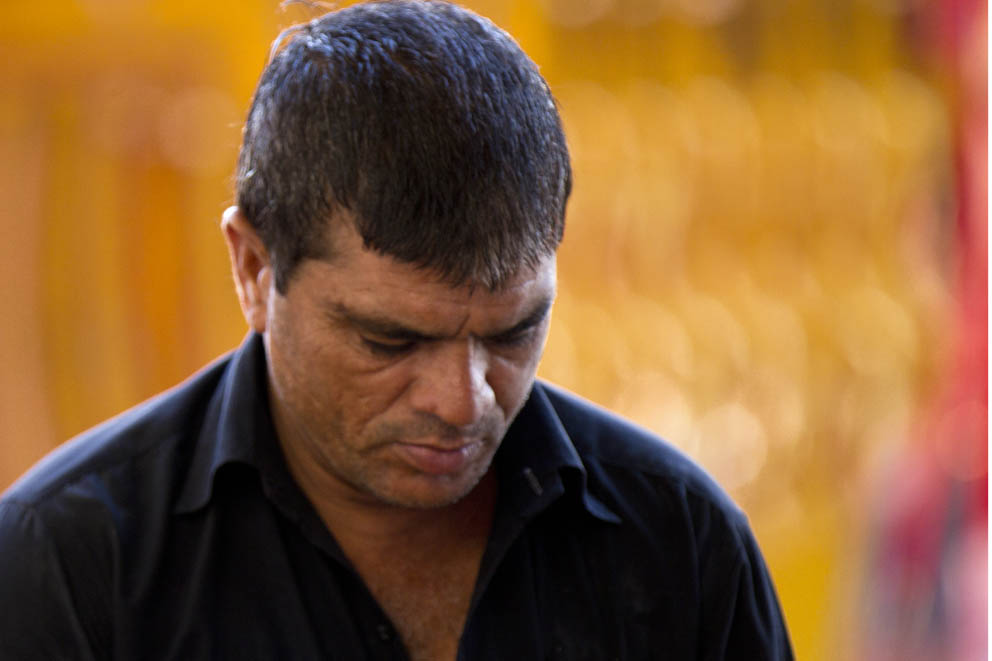 Mind you, look at the clientele Mean has to deal with: 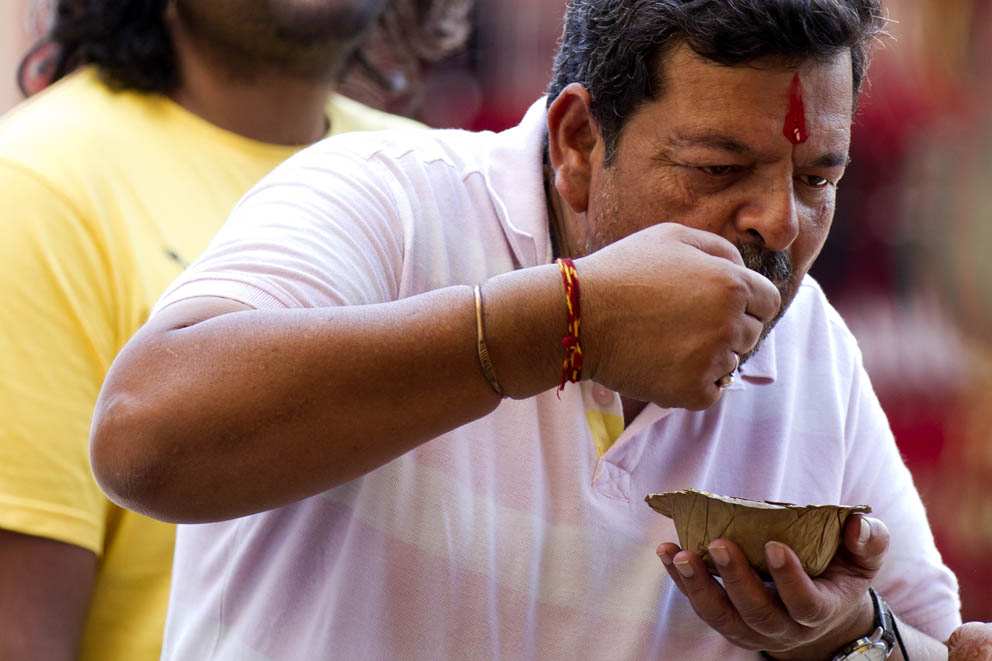 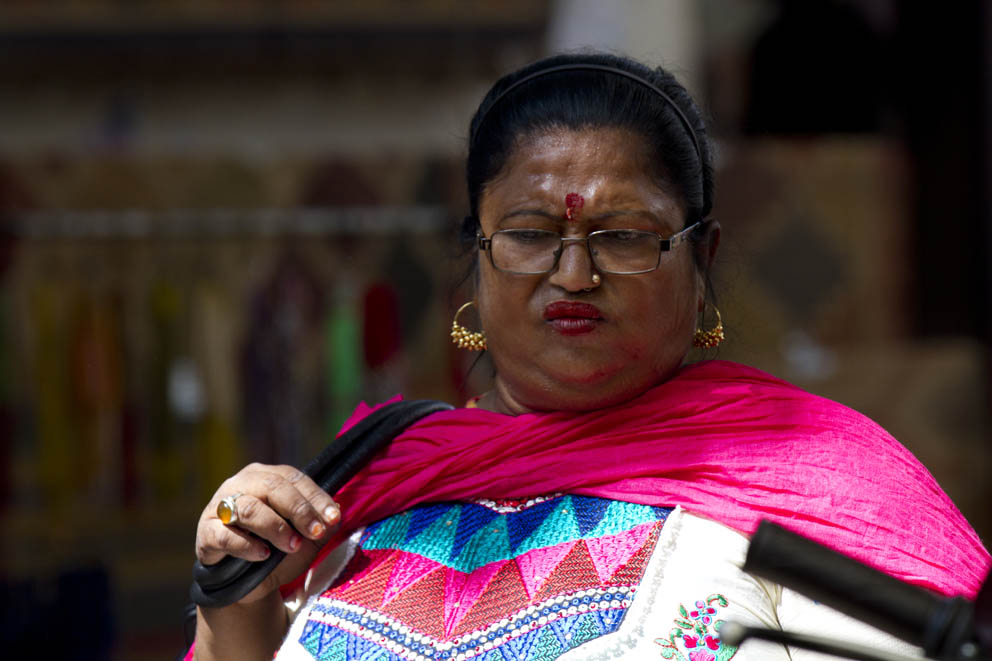 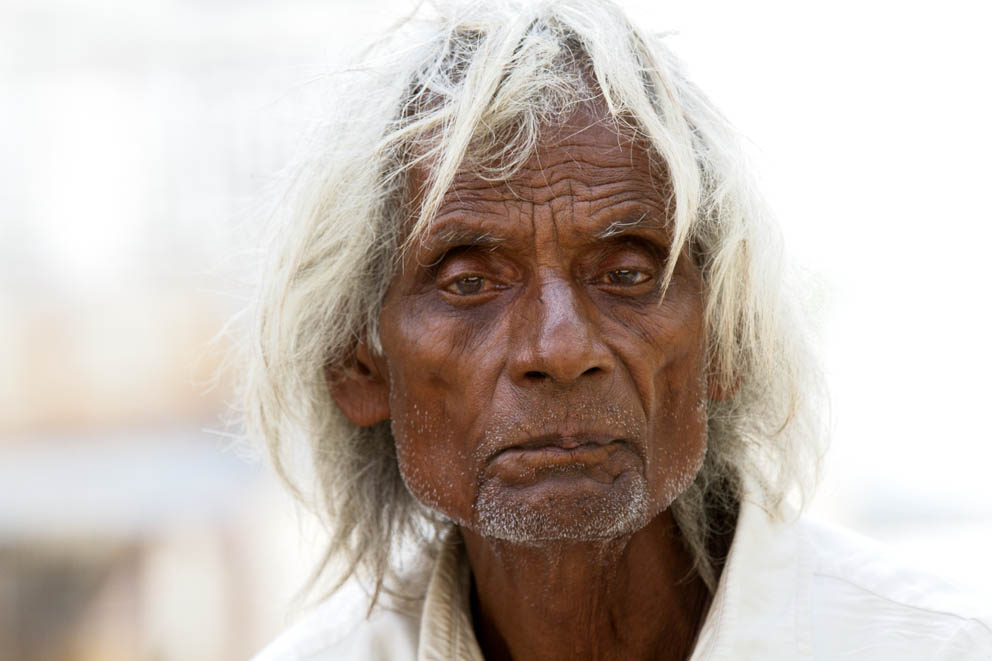 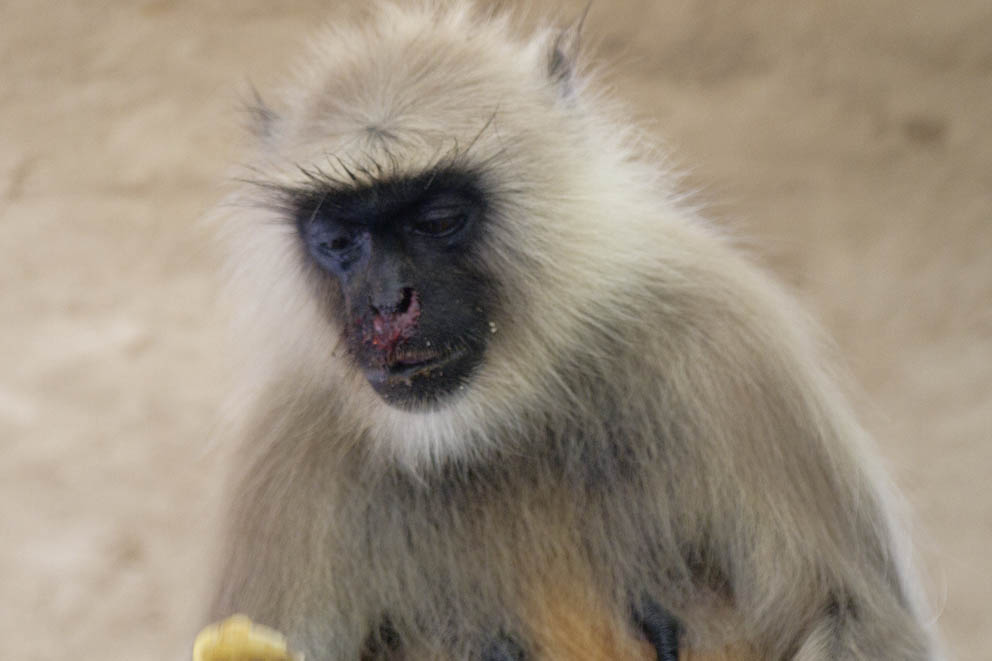 OK, that last is a tad unfair. Unlike the smaller red faced monkey, who hangs out in large packs and can turn nasty, the grey langur is gentle and rubs along nicely with homo sapiens. This chap is an old favourite with Gerry and the boys, who in quiet moments will throw him a titbit.

That said, quiet moments are few and far between at Gerry’s Place. 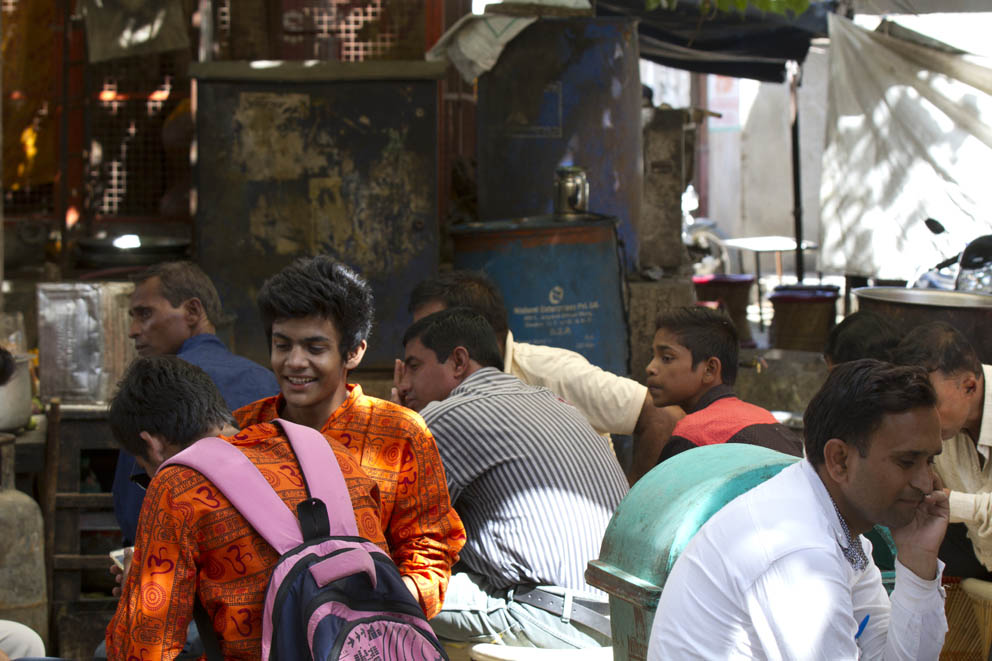 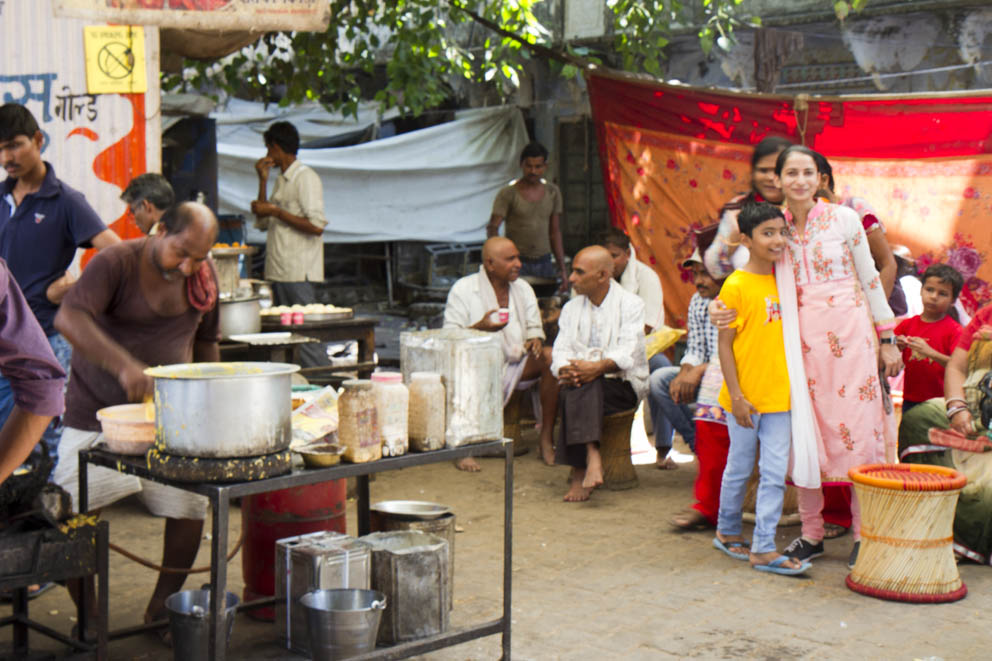 4 Replies to “Street food in Rajasthan”