Skip to content
Early yesterday morning a cormorant on Pichola’s north-east corner, in Udaipur’s Old City where it narrows to a canal connecting the lake to Fateh Sagar, caught a pipefish a foot long. I didn’t see the duo surface, the one to live, the other to die, but happened to be strolling by as, head in the vice-like bill of its bobbing nemesis, the eely piscean writhed out its last moments before going limp as a wet sock. I snapped away at thirty metres but, despite 2 x extender screwed on earlier for just such a shot – giving a whopping de facto focal length of 640mm – it’s not much cop. One reason is all that heavy glass doing little for steadiness of hand, another that I hadn’t time to ramp up ISO for fast shutter speeds and a third that I’d downed two stiff masala coffees at Johnny Tea Center (see Faces of Udaipur). 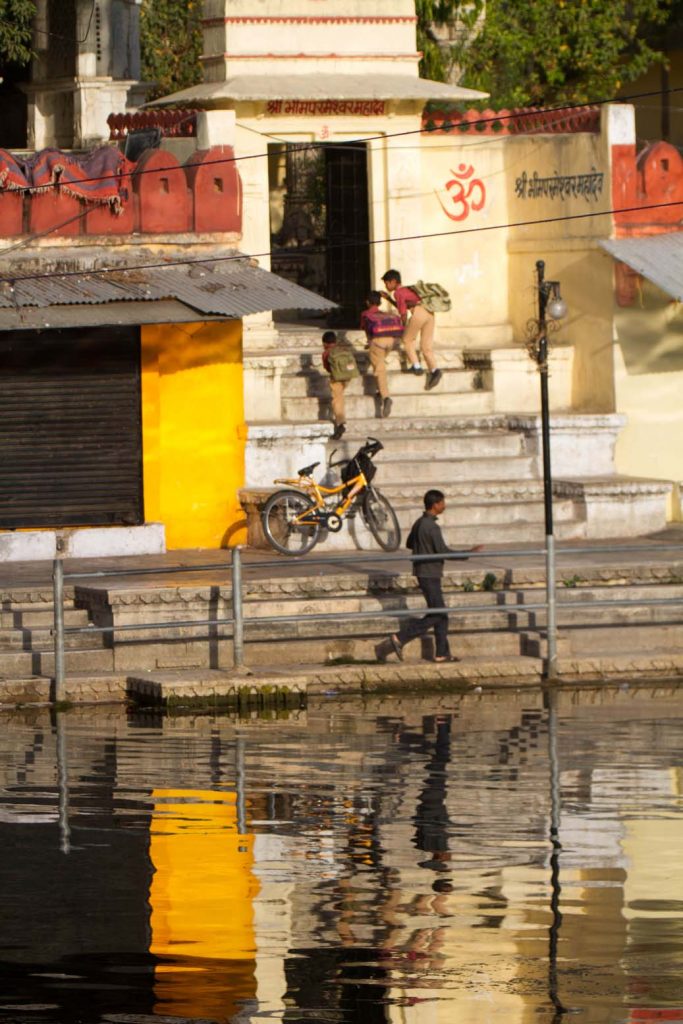 Shame that. Typical prey for these guys (wiki claims forty types worldwide if we include shags, though at what point a local variant gets its own Latin name is a matter of hot contention for those who care about such things) is smaller. This was a photogenic moment if you like your nature red in tooth and claw. 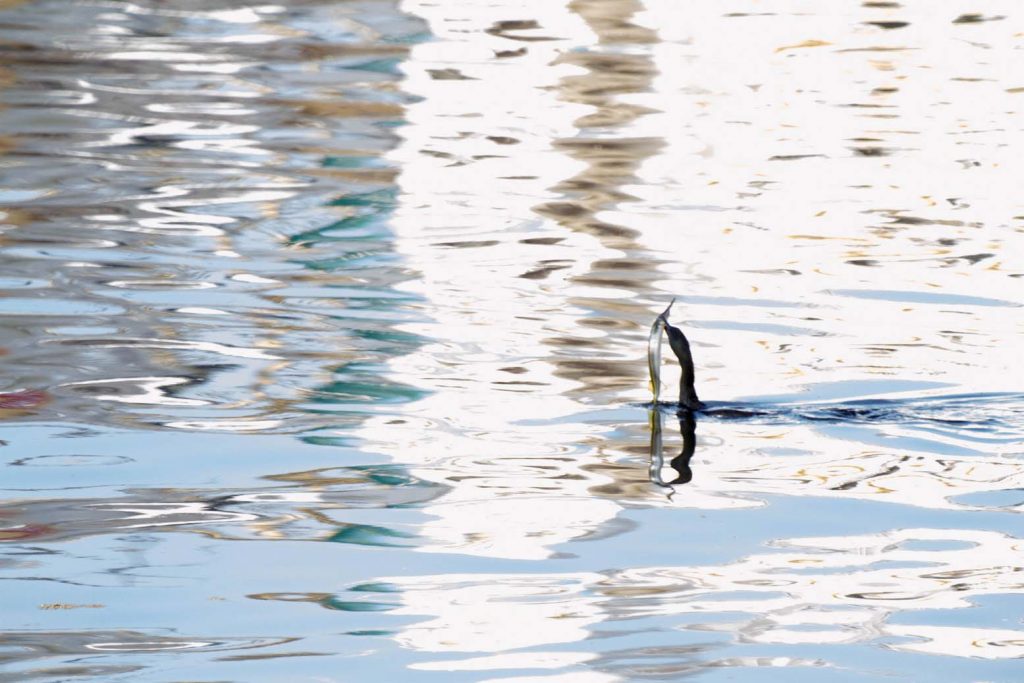 The lake, four kilometres north to south and three east to west, is a mere seventy metres here, with a footbridge connecting Old City and quieter north-west quarter. Men fish from it, though somewhat less effectively than cormorants. It’s allowed, where it isn’t in the strictly vegetarian holy towns of Pushkar and Rishikesh, but in two trips and many crossings I’ve yet to see anyone land the fish so tantalisingly visible from the parapet. When finally they do I’ll dine with them: Pichola’s waters look clean as a Scottish loch. I’m not holding my breath though. A boyhood angler myself, the locals’ MO and kit look deeply sub optimal to my eye, though English reserve and a nice sense of the boundary between tactical tips and cultural imperialism prevent my suggesting finer lines, smaller hooks and sensitive float rigs in lieu of the lead bombs they go in for. Not to mention the fact I’d look a twat if they took me at my word, only to catch even fewer fish. 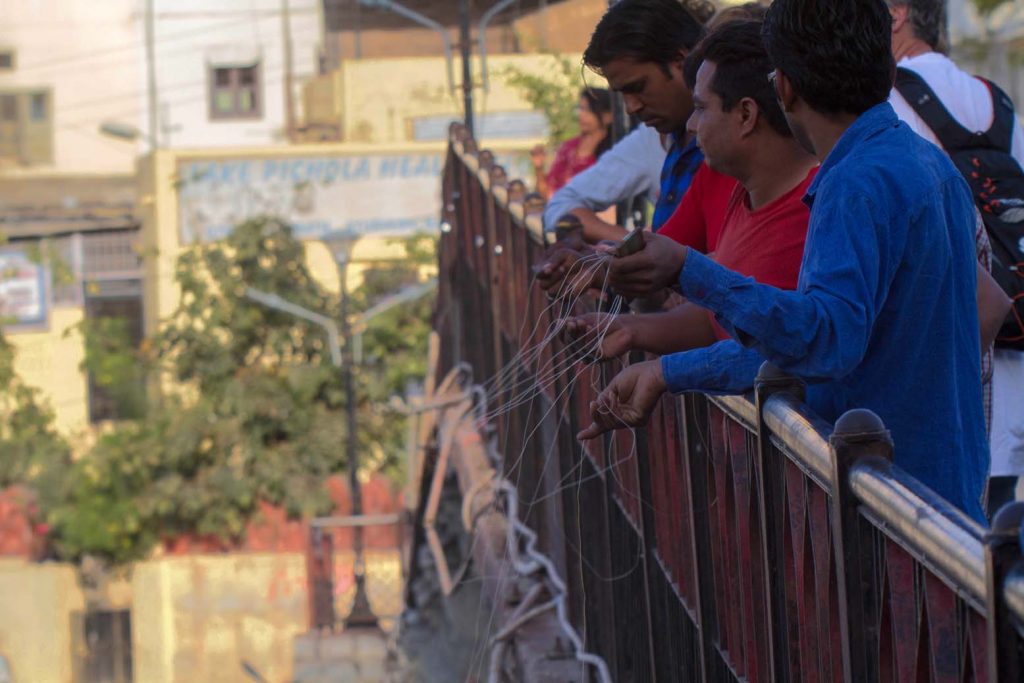 I sit mid morning in my room with a coffee pot, the day already hot. I’m not at a hotel but in one of two clean, simple and delightfully situated rooms, en suite and overlooking Pichola’s neck, a minute’s amble from the pleasant arches of that footbridge, brick red on yellow stucco to echo in microcosm the hues and contours of a road bridge three hundred metres north. On a window seat that would be comfortable but for a sharp corner on the modern frame within the haveli bay, I look down on the lake and across at a peepal whose leafy branches span the alley that serves these buildings and the Hindu templed bathing ghats lining the bank. If I reach out I can touch the leaves, beechlike, but tapering to fine antennae at their tips. I’ve snapped the three-stripe squirrels native to India as they sniffed the air from branches that would take my weight as easily as theirs had I the agility, as I once had, to leap with confidence from such a window.

A few hundred metres down the lake southwards, those fabulous palaces Rajasthan is famed for begin. Every West-facing joint in town does omelettes, toast and peanut butter – and free screenings of Octopussy, on account of the Bond movie shot in one of those lavish but not unbeautiful monuments to maharajah excess. 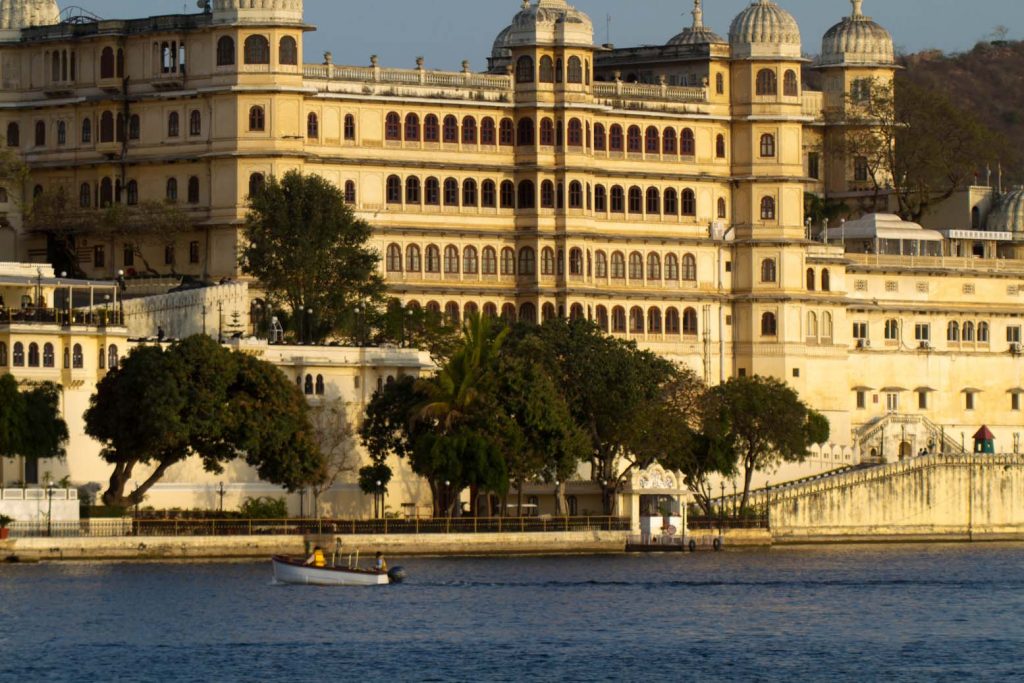 Before daybreak India’s incomparable sounds, some of which I’ll record on an audio device I for once remembered to pack, awoke me. The country’s a sensory riot, each of whose five fronts offer the full gamut from ineffable grace and beauty to nausea inducing and cruel. Its sounds include bells, music and chanting any hour of day or night, traffic cacophonies that die down after eleven pm in this popular but small city and, from before daybreak to late afternoon, the rhythmic thuds of dhobi  wallahs slapping wet clothes on the steps of the ghat directly below.

Washer folk are a caste (untouchable dalits, but not so low as tanners) whose surnames – Chauhan, Shukravar, Mahavar, Basvadiya – give away their occupation and status on the wheel of reincarnation. By devotion and righteous lives, these unfortunates might fairly aspire to rebirth in higher caste. Till then, passive submission is still – Gandhi’s words and the rise of a few dalits to positions of political authority notwithstanding – seen by many in rural India as the wisest course,.

For a glimpse of India’s caste system, vicious tyrannies and capacity for communal tension still capable of inspiring bloodbath, Rohinton Mistry’s A Fine Balance is a better bet than the more widely known Booker winner, White Tiger. It shames me to say the nightmares it depicts took place as I was making my first and longest trip here. 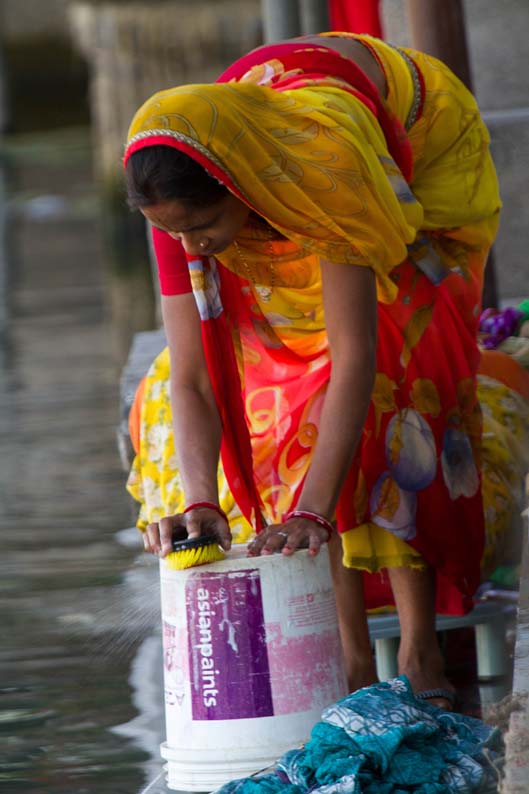 Even as Indira Gandhi declared her state of emergency, landowning zamindars delivered, at a price, the block vote of ‘their’ peasants to a Congress Party which in the early seventies had yet to contend with Hindu supremacism in the form of the BJP. The horrors Mistry uncovers – all of which escaped my notice as, seldom removing my hashish-tinted specs, I toked my way across a mythical land of peace and harmony, meditation and deep contemplation – are revelatory if you’ve the stomach for the cruelties he paints with searing authenticity.

(Incidentally, though they rather frowned on us hippies, the ‘spiritual’ brigade trekking out east showed even less awareness of the realities Mistry points us toward.)

Such realities (some gone, others persisting) notwithstanding, Udaipur is a fine place to hole up. That’s just as well when my normally keen appetite for adventure and engagement has for the time being deserted me. This trip is different in that it feels less about travel as I normally understand, experience and practise it; more about laid-back holiday with time out to reflect.

I’m at a crisis of political outlook: at odds with most of my peers, who seem more put out by Brexit and Trump’s oafishness than the belligerence of a dying empire physically and morally capable of taking out the entire planet. I’m not keen as a rule to be proved wrong but for once hope they’re right. Either way, life crises – and this one’s small as they go – are no bad thing. In my experience they can presage spiritual renewal once their real nature shows itself and is faced: thesis, antithesis, synthesis. But at such a time I wouldn’t want to be stuck in one of those desolate holes India – which, for all her charms and seductive mystery, leads the world on depression – can dish up to the unwary, sapping energy and even will to break out. I hit such a low last trip when the only thing I done wrong was stayed in Bundi way too long. I couldn’t for a week find the wherewithal to get my arse to Pushkar, where, despite and maybe because of the hustle, my spirits soared.

Hence my unusually low output, given that I’m now two weeks in India. It’s been worrying – we scribblers need no externally imposed projects or deadlines to put ourselves under pressure – but I’ll go with the flow and do as little as I feel like. If that means whole mornings, days even, hanging out in room or quiet cafe then so be it. Udaipur’s a fine place for doing nothing at all, and who or what’s to stop me staying here – £10 a night with temperatures still below forty, idyllic views, exquisite sounds and the best food in the world – till my flight path obliges me to be in Delhi at month’s end?

Meanwhile I do have a small project in mind, one I can execute with little fuss and involving no one else. I’ve been strolling the lake for days, taking snaps at different times. Pichola is not fully circumnavigable, alas, or I’d walk all the way round, starting at six to beat the sun, and getting back for afternoon nap. But a mix of private land, dense scrub and road leading promisingly south of town – but terminating in the middle of dusty nowhere – rule it out. That still leaves a good kilometre of quiet, lake hugging lanes rich in wildlife though. And that’s just the east bank, with the west barely explored by me.

In a forthcoming post I’ll break my own rule and tell something of Udaipur’s fascinating history. I don’t usually write about things you can as easily find out in guidebook or wiki, but seeing as I’ve not a lot else to say – and seeing as this is a story you couldn’t make up: featuring warring kingdoms and a mighty empire doomed by one even mightier, a nanny who sacrifices her infant son that her princely charge might escape regicide and fratricide both, and a timeline linking sixth century appearance of the Rajputs with the eighteenth century seeing off of marauding Marathas by those selfless chaps at the East India Trading Company – I’ll make an exception just this once. 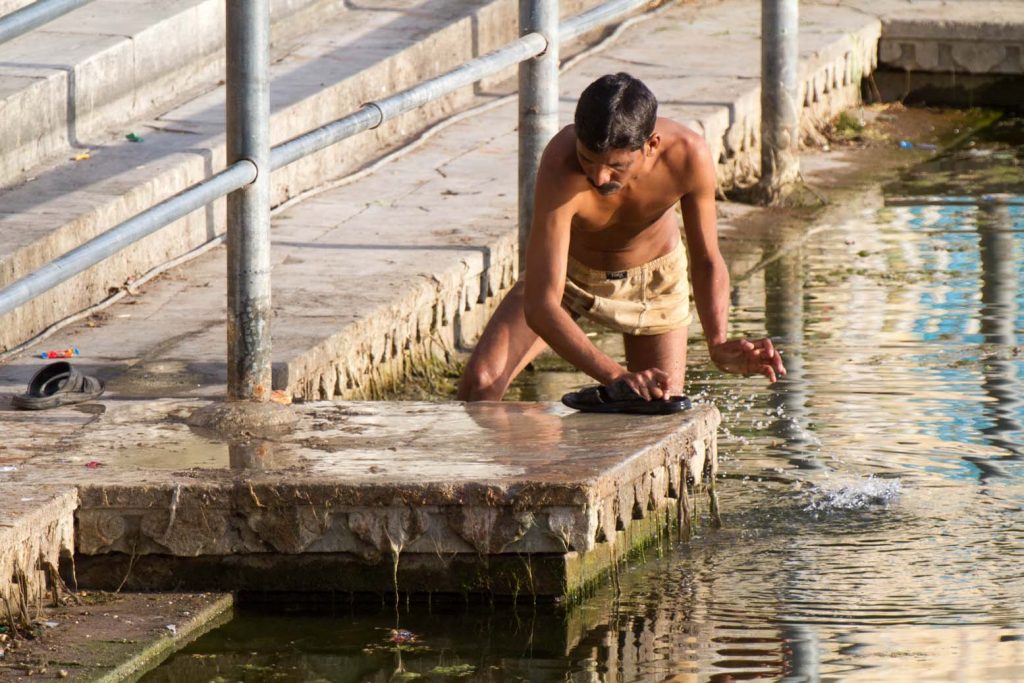 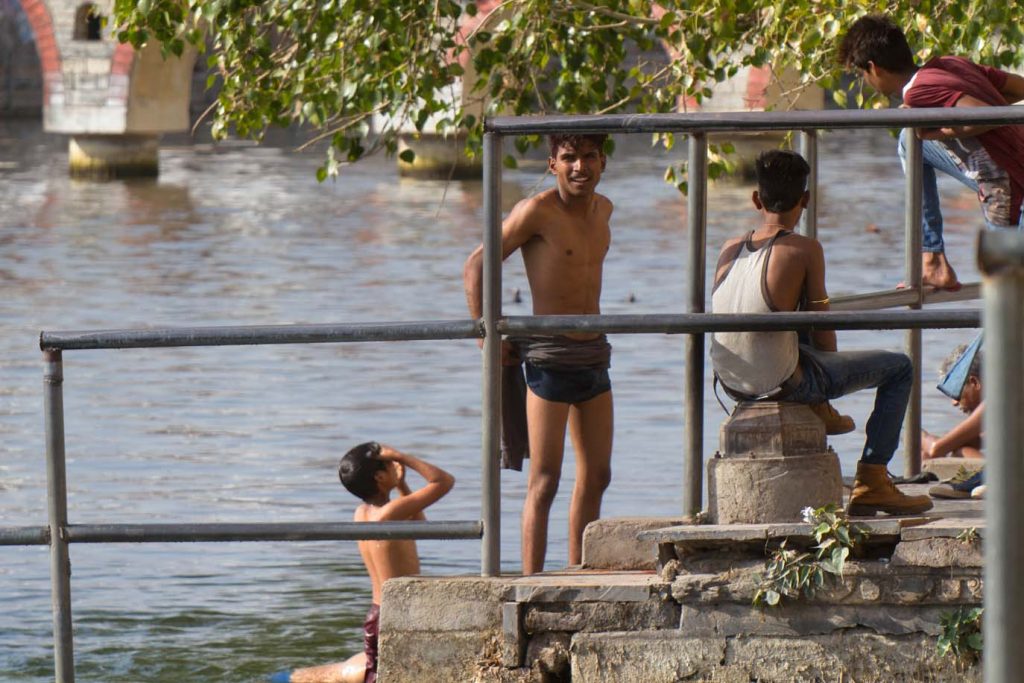 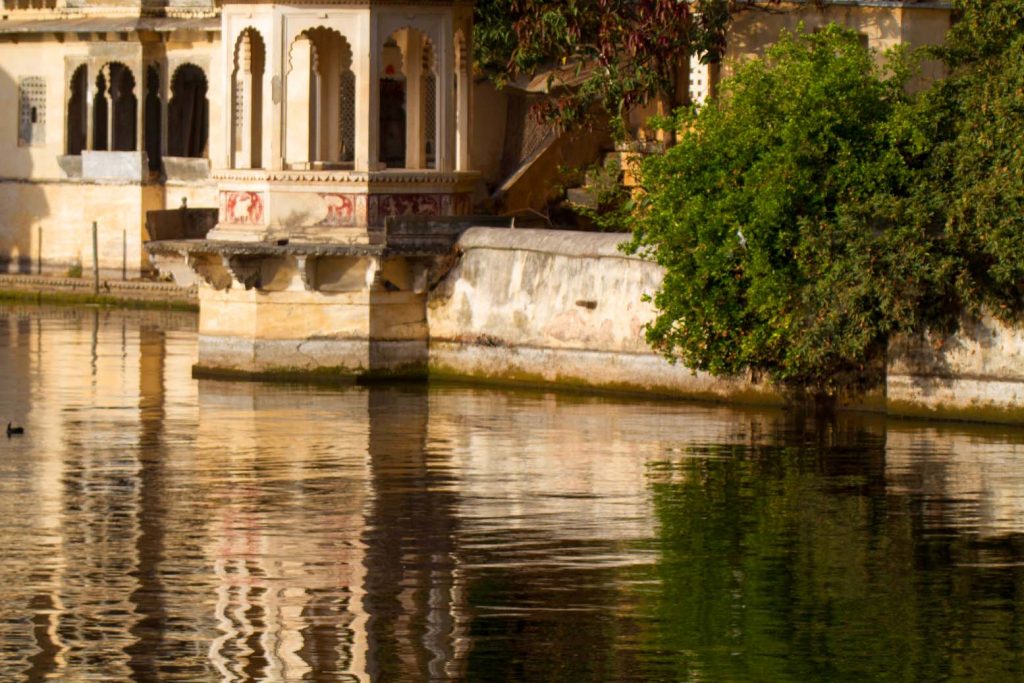 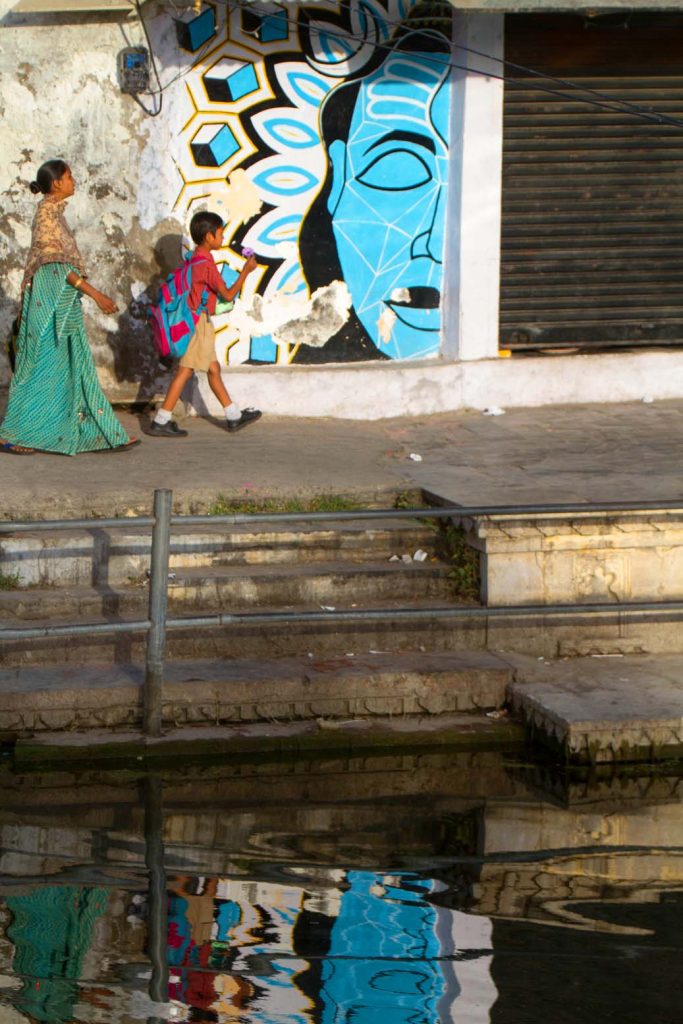 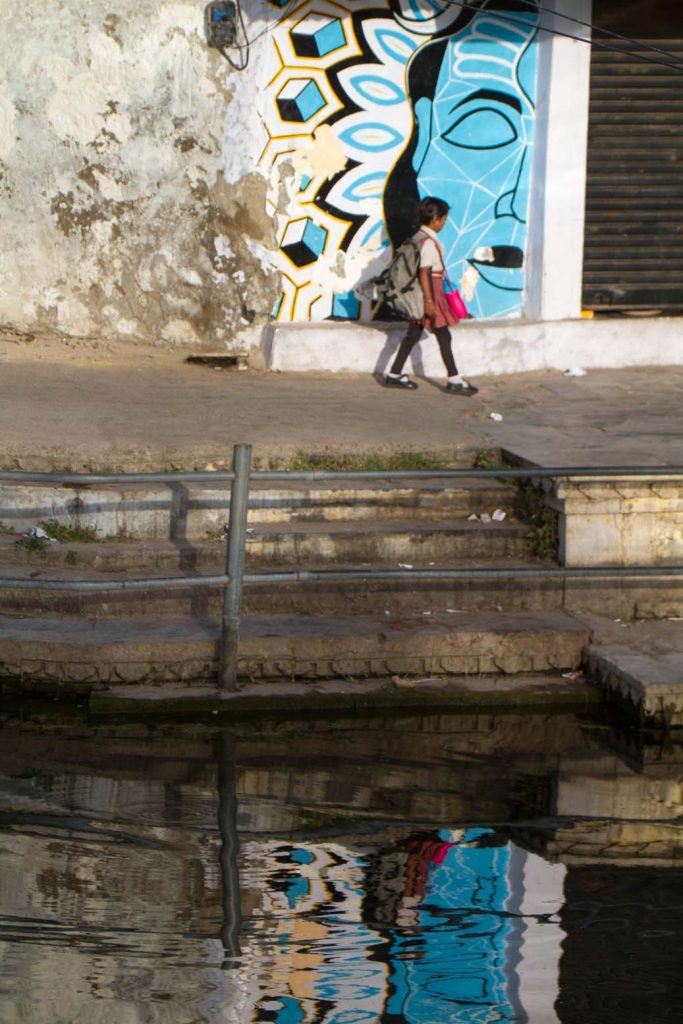 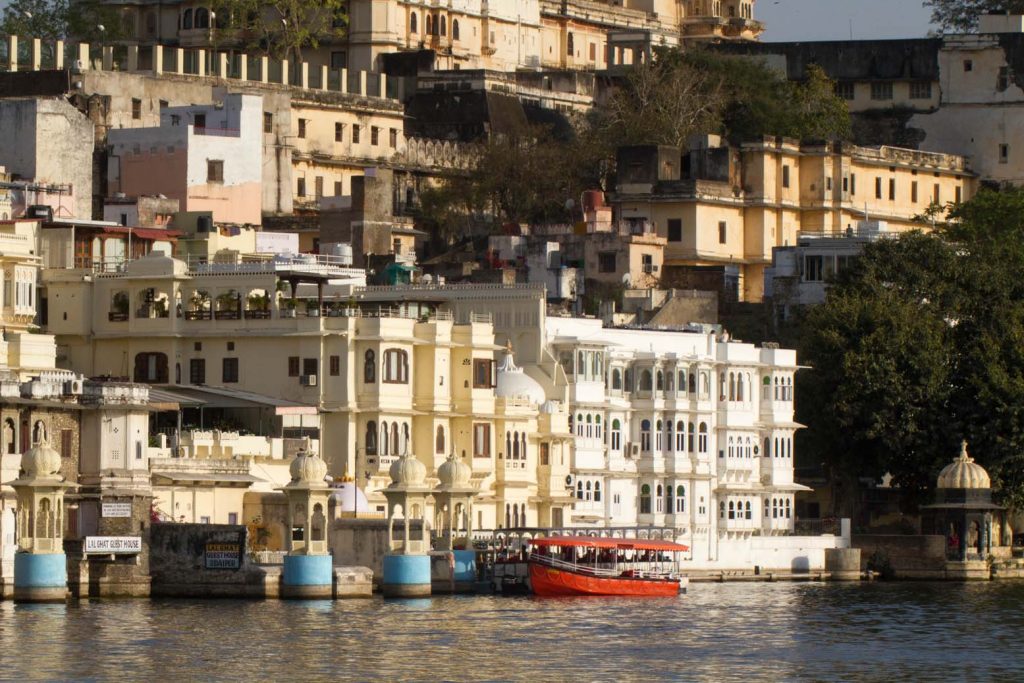 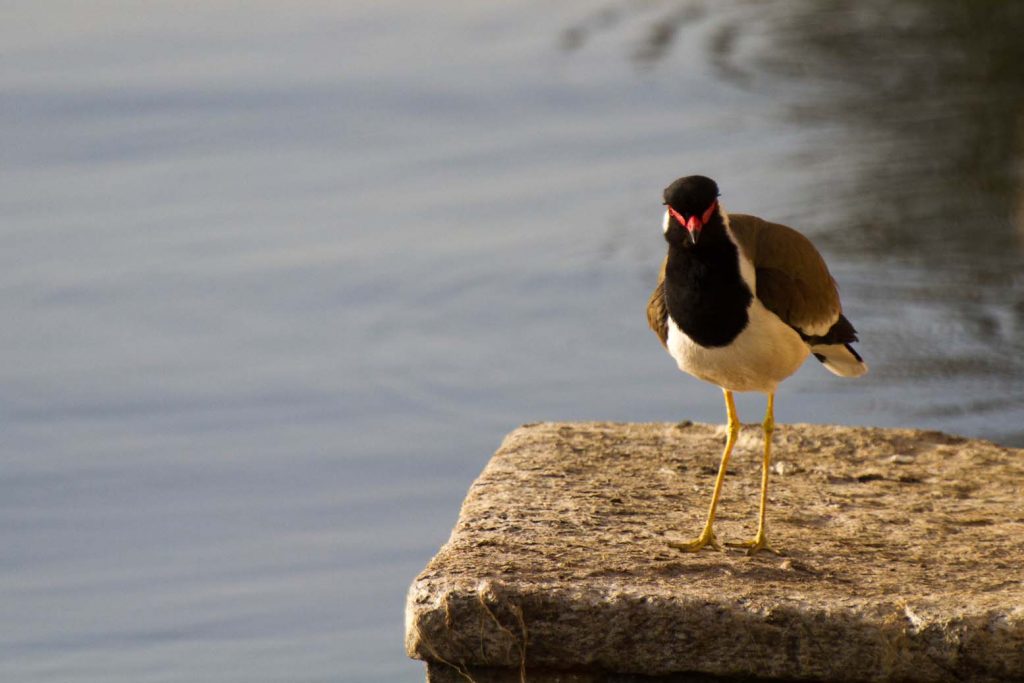 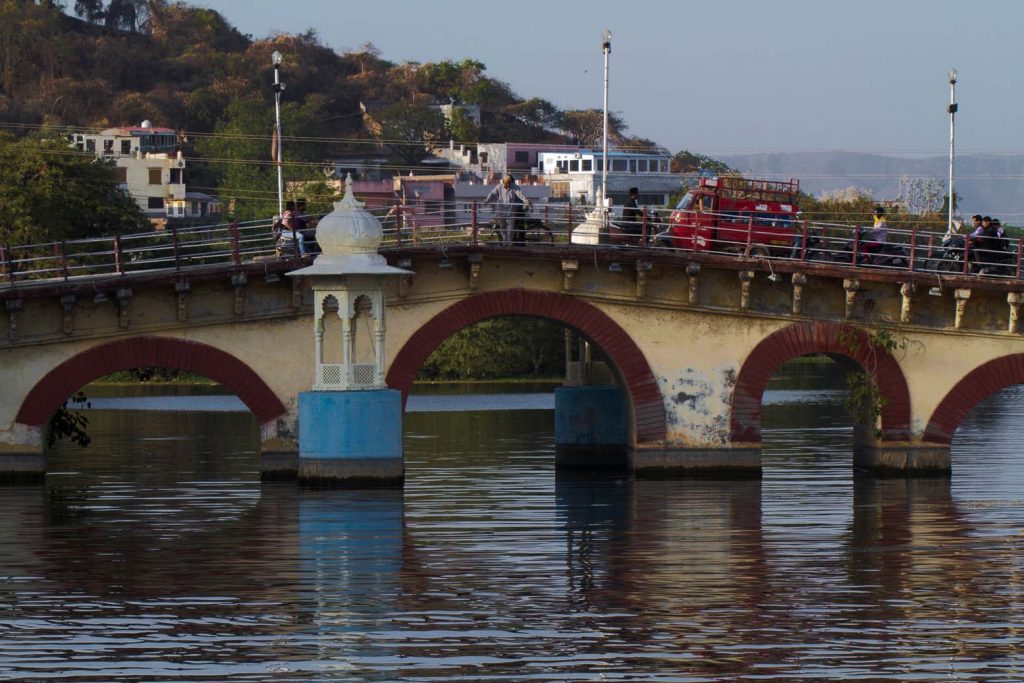 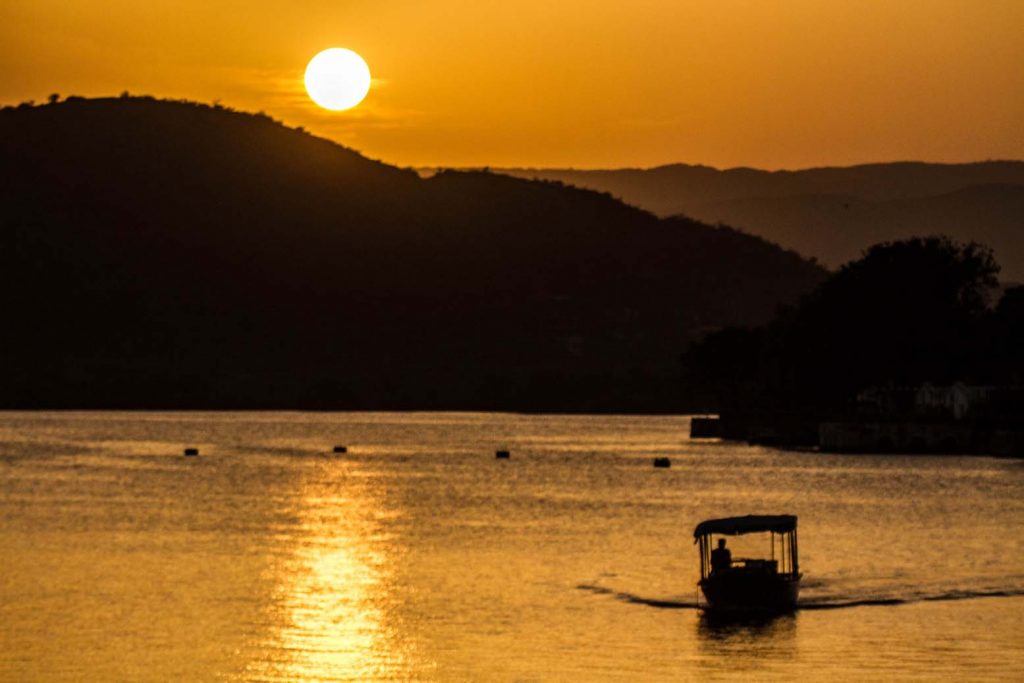 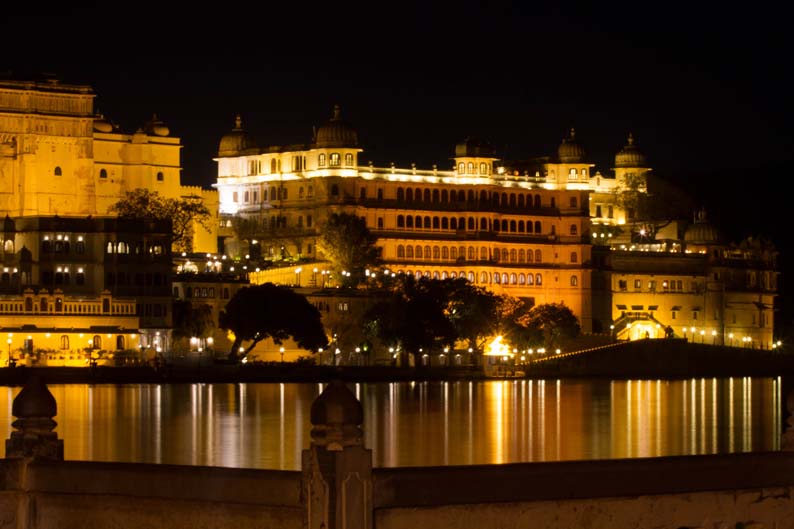 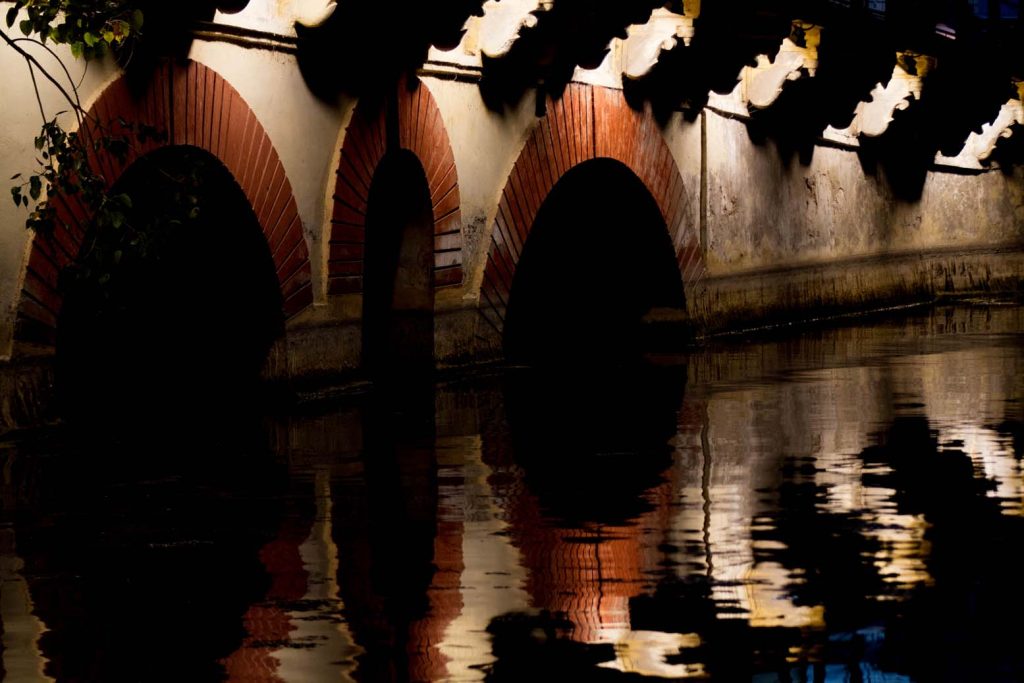