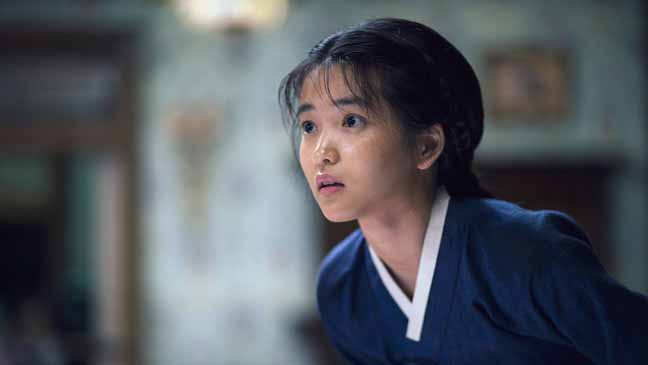 But for its thoroughly (post) modern approach to temporal sequencing, the Handmaiden could be placed squarely within the Canterbury Tales and Arabian Nights tradition of storytelling, not least for its sexual explicitness and moral point scoring. Set in early twentieth century Korea in the grip of Japanese racial supremacism, this darkly comic thriller would have held my interest, for the duration of its twisting two and a half hour ride, on the sumptuous camera work alone. But the story’s a corker and when you find yourself wondering – as you will – WTF is going on, do remember that, as flagged up at the beginning, this is a tale in three parts.

Similarities between this subtitled Korean film and Billy Wilder’s noir classic Double Indemnity – and raunchy eighties successor Body Heat – are too great to be coincidental. I’m talking two women, one man and a stitch up, though Handmaiden offers three distinct perp pairings – and three distinct victims – before making its final choice as the winners sail blissfully away in one gorgeously prolonged love scene.

Speaking of which, the tale is driven merrily along by lesbian attraction, its sapphic scenes here exquisitely comic, there endearingly celebratory. Yes, I do have to make room for the possibility that, like one of the supporting characters, I’m just an ageing lecher but my sweetheart was by my side from popcorn ads to final roll of credits, and her take was much the same.