Especially moderation. Guardian below-the-line commentator zerohoursuni this week had three of five comments on a single article removed. (Comments on a Guardian piece routinely exceed five. Not by word or deed has the Guardian ever signalled that it rations BTL space.) He’s also been put on ‘pre moderation’, where none of his comments may be published until read by a human moderator.

It isn’t Guardian practise to explain such decisions but the offending comments had no abusive or ad hominem language, nor did they plug commercial interests. Unlike the two allowed, however, each held a single link to a different and relevant  post on this site. For the record, the Guardian’s stated grounds for removing a comment are that:

Steelcityscribblings is often critical of the Guardian, and of named columnists, but such criticisms are reasoned, free of gratuitous abuse and not otherwise breaching these rules. We have to ask, therefore: is the Guardian being honest about its real moderation policy?

The more so when Kit, editor for OffGuardian, told of his recent experiences in responding to a Guardian article I haven’t yet read, though I’ve read others vilifying Putin on scant evidence and thereby making their own modest contribution to WW3 in the name of liberal values. (On this last, see my letter to Owen Jones for fuller discussion.)

I don’t comment on the Guardian anything like as much as I used to, it has become largely pointless due to the massive and dishonest moderation. But the recent spate of rather retro anti-Russian articles caused me a brief bout of sarcasm under this article, headlined:

I thought nothing in Russia could shock me. Then I went to a television broadcast

It’s a forgettable book-plug, neck-deep in condescension, telling the story of how – in horrible evil Russia – there’s a person that tells the audience when to clap and when to stop clapping. The fact this is exactly how television all over the world works is not mentioned.

Naturally, I was immediately called a “putinbot” by the sort of high-minded individuals who, 500 hundred years ago, would have been having epileptics burnt at the stake:

We sympathise. We too have been called Putinbot, asked how well the Kremlin pays and what the weather is like in Moscow today.  Here’s the exchange Kit alludes to: 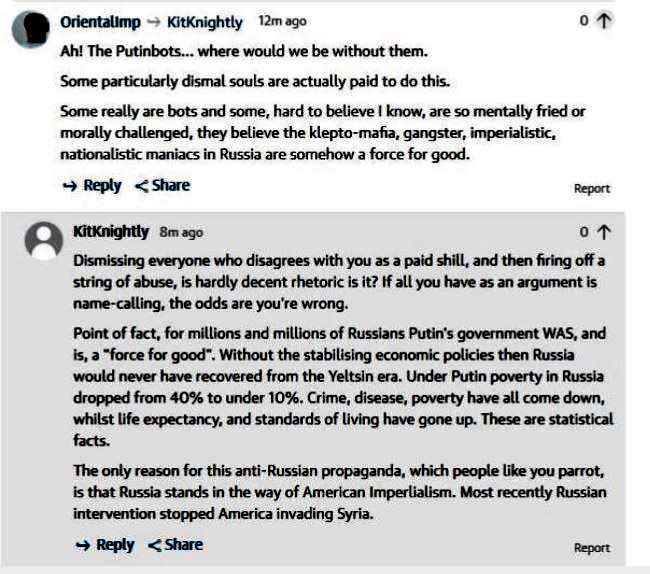 Interestingly, when it came time to remove comments, it wasn’t the abusive response that was removed, but the whole section:

In line with the Scott Trust’s change of status to a limited company, comment is not quite as free these days at the Guardian.