In the latest Berkeley controversy over what speakers may talk about, the progressive radio station KPFA has canceled an Aug. 9 on-stage appearance by the scientist Richard Dawkins. KPFA had invited the British scientist to discuss his newest book, Science in the Soul, which it termed “excellent.” But on Thursday it canceled the event, citing concerns about the tone of some of Dawkins’ tweets about Muslims.

The fall-out was swift. Pundits on both sides pitched in, while for his part Dawkins asked – he says in vain – for examples of the offending tweets. Metro, July 25, has him saying to KPFA:

You conspicuously did not quote a source when accusing me of ‘abusive speech’. Why didn’t you check your facts – or at least have the common courtesy to alert me – before summarily cancelling my event?

Seven days ago, writing in the Independent, novelist Rajeev Balasubramanyam – a Hindu name as it happens – weighed in against the renowned atheist. Click the image to read the full piece.

It’s often forgotten that it was his alarm at religious interference in school science teaching that set Dawkins on a trajectory which, whatever its merits, has overshadowed his work as a science writer. (I for one will take some convincing that The God Delusion is as important a book as The Selfish Gene.) 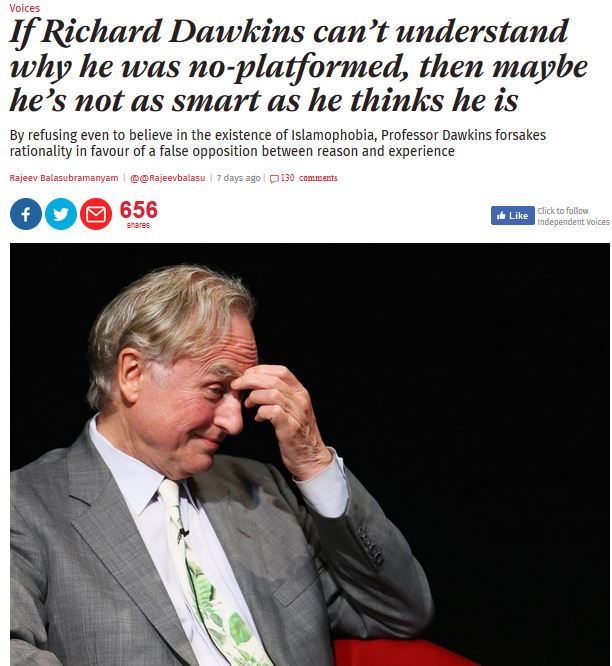 Despite the first of those two titles – he does court trouble with flashy headlines – Dawkins is not out to prove that God does not exist, if only because he knows full well he’d be on a hiding to nothing. Proving a negative is tough. This is a truth worth stating both for general reasons and in the context of criticisms made by a Rajeev Balasubramanyam who does flirt in singularly shallow fashion with epistemology.

I disagree with Dawkins – and, for the same reason, with Steven Pinker and Sam Harris – on what I see as his idealist reductionism (which I used to share) in attributing violent Islamism to core tenets of Islam, as opposed to a century of post Ottoman colonialism and imperialism in the oil rich middle east.

I agree with Balasubramanyam. Islamophobia is an important word, but it denotes a far trickier meme than he gives credit for. Its mirrored form is Islamism, repeatedly deployed by a western imperialism whose lead agents unblushingly declare total war on it. For a useful summary of a century of double-speak here, see Samir Amin’s Political Islam in the service of imperialism.

Balasubramanyam, alas, makes not one reference to US led mayhem and carnage in the middle east. This despite the fact its wars on Afghanistan, Libya, Syria and Yemen have seen the West actively collaborating with Islamist terror, and/or its Wahabi sponsors in Riyadh, while reckless and even bloodier aggression in Iraq created the hot-house conditions in which ISIS flourished. But rather than focus on such realities – surely the most effective retort to Dawkins’ naïveté – his candyfloss put-downs zero in on skin colour and chromosomes. They bypass class, empire and even race – in the political sense of that term, which is precisely where it intersects with the other two – in favour of anodyne nods to gender, culture and half baked epistemology:

… the way Dawkins speaks about Islamophobia, as a baseless, non-referential concept, is not dissimilar to the way he characterises god, or faith, as something that exists, “only in the form of a meme with high survival value or infective power, in the environment provided by human culture” (The Selfish Gene). He finds it intolerable that others should treat their subjective experience as evidentially valid, be these religious experiences or the “speaking as a woman” type of pronouncement often lumped together as “identity politics”, something Professor Dawkins has condemned as “one of the great evils of our age”.

“Objective truth is oppressive,” he tweeted parodically on 30 June. “It’s true for me” encapsulated the postmodern ethos… I despise postmodernism.” “I detest any tendency to treat a person on the basis of a group to which they belong,”

The trouble is that by invalidating experience, whether that of a group or an individual, as a basis for argument, Dawkins effectively invalidates most of the empirical tradition that he, as one of the self-styled guardians of the values of the enlightenment, lays claim to. Indeed, when it comes to the subject of Islam he has famously rejected the need even for textual evidence, tweeting that: “Of course you can have an opinion about Islam without having read the Qu’ran.” The necessary riposte to such statements is that Dawkins can get away with such opinions because of the tribe that he belongs to – that of white, upper-middle class, male super-intellectuals.

The opening sentence of that last paragraph is a nonsense that hinges on Balasubramanyam’s failure – sly or sloppy? – to locate precisely where Dawkins refers to experience, thus robbing us of context. Are we to believe this first rate scientific mind unaware that the entire empirical tradition rests on the axiom – act of faith – that our senses are in principle capable of delivering accurate information about a real world ‘out there’? Are we to believe Dawkins is incapable of distinguishing subjective experience (Bernadette’s vision, say) from the shared  and repeatable  experience of seeing water consistently boiling, on 99.999 percent of our planet, at 100 degrees centigrade?

But Balasubramanyam’s dabblings in the philosophy of knowledge are secondary. The more substantive issue is this culture and identity thing. I can forgive his casually repeating the white man trope. It’s sloppy in a personalised idealism that locates oppression in ethnicity, gender and social class rather than material exploitative relations. It’s also mechanically reductionist in implying a crudely one-to-one fit of skin colour to world view but, in fairness, that’s a drop in the ocean against the systemic racism mediated across the globe by white men (and women like Hillary) and their compradors of all colours and creeds in the interests of Big Capital. Which consideration only brings us back to my point that these are the very factors Balasubramanyam neglects to mention:

I do not believe that Professor Dawkin’s blind spot regarding Islamophobia is due to casual insouciance or political naiveté, but to a combination of ignorance and intellectual arrogance that results directly from his own group identity, that of a hyper-advantaged white male, a modern day emperor of knowledge.

Whereas I do, you see. I do believe Dawkins politically naive. (I’d further argue for naïveté as an important quality in science and other creative activities, but that’s another story.) He’s a naive scientist who should no more be taken seriously on Islam (as opposed to religious meddling on the teaching of science) than the naive rock star John Lennon on Christ – or the naive novelist Rajeev Balasubramanyam on Dawkins.