A little background. Before Daraa 2011, Erdogan used to call Assad ‘brother’, while the wives of the two men took holidays together. That changed when he saw advancement in the West’s plans to make Damascus the latest chapter in its regime change agenda. (Said plans expedited rather than informed by Syria’s ‘Arab Spring’.) Recep denounced brother Bashar as a ‘tyrant’.

Such calculations still formed the backdrop to November 2015, when Turkish F-16s – perks of Nato membership – downed a Russian Sukhoi Su-24M on the border: in Syrian airspace said Moscow; Turkish said Ankara. With Hillary a cert for president and promising a no fly zone of the kind that had preceded Libya’s marvellous liberation, but now with added frisson of the world’s first and second nuclear powers going head to head, the incident gave due warning of the global implications of Syria’s ordeal.

In November 2015, however, the coup Erdogan would blame on Washington lay eight months ahead. Ankara, though ambivalent on ‘Western values’ – and blowing cold on EU membership – was still deemed onboard with the Nato project. 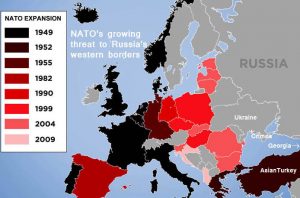 Then came the failed coup. Ankara gave itself a good talking to. Who were its friends? Whom its enemies?

Naturally the West, liberal media in particular, were quick to focus on Erdogan’s ‘paranoia’ in seeing CIA fingerprints on a largely though not unproblematically secularist plot. Add to this the conservative base of his support and we can understand Guardian alarm at the threat to liberal values. (Talk of restoring the death penalty, retrospectively to deal with the plotters, not only raised progressive hackles but drove a further nail in the coffin of EU entry.) But that alarm, and the blinkered focus it engendered, came at cost of serious assessment of wider ramifications. What our media were at best only hinting at was that, never mind the EU, Turkey’s long term Nato membership – crucial, as the map shows, to the semi-encirclement of Russia – might no longer be taken for granted.

On no matter do these changed circumstances manifest themselves more clearly than the YPG presence in Syria. For mainstream media these are true freedom fighters, ‘moderate Islamists’ heroically taking on Assad’s tyranny while remaining untainted by alliance with ‘bad Islamists’.

To Ankara it all looks very different. These are terrorists pure and simple, the Syrian wing of a Kurdistan Workers Party outlawed in Turkey and by successive US administrations – whose limited sense of irony was informing such as Irangate long before Trump and Tillerson arrived to update the rulebook.

So here we have it. Five days ago US Secretary of State Rex Tillerson announced his unilateral intent to build within Syria a 30,000 strong border force under the command of mainly Kurdish SDF fighters. Tomorrow they’ll want payback in the form of US backing for a Kurdistan carved from Turkish as well as Syrian territory. Today though, their presence as American proxies may be sold as war on ISIS but in reality signals Washington’s undiminished intent to dictate Syria’s destiny. Where invasion, direct or by proxy, has been thwarted by Moscow, it hopes partition and balkanisation will succeed.

But Ankara had its own response to Tillerson’s announcement last week – “we don’t care!” In its shelling yesterday of YPG ‘People’s Protection Units’ it showed it really doesn’t give a flying fork for game plans hatched in Washington. As a matter of fact, if it seeks a green light from anyone these days, it’s more likely to be Vladimir Putin and Sergey Lavrov than Donald Trump or Rex Tillerson.

With these considerations in mind, do compare the Guardian’s simplistic coverage of Turkey’s latest move with al-Monitor’s detailed and nuanced reporting. It’s not that al-Monitor is more left wing or progressive. Just that the biggest problem with the Graun is what it doesn’t tell us.