Remember that spat last August between UK Health Secretary Jeremy Hunt and Professor Stephen Hawking? Stephen, sadly, is no longer with us but Jeremy, sadly, is. 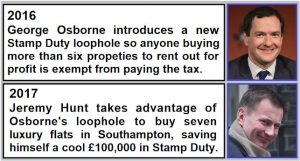 Thanks to Didi Cooper for the FB alert. I wrote last month, apropos the UK property racket, that “capitalism frequently embarrasses its more thin-skinned defenders: a group that, I kid you not, can include leading Conservative politicians”.

It seems it can also include that august body, the National Landlords Association. The Mirror, which ran this story two days ago, April 23, has NLA spokesman David Smith telling us it “looks bad that a minister is very clearly taking advantage of a poorly designed policy.”

At the time of Hunt’s row with the renowned physicist, Shadow Health Minister Justin Madders tweeted:

Professor Hawking has given us answers to many of the universe’s most challenging questions, but even he can’t work out why Jeremy Hunt is still in his job.

Way below the belt, Madders! I’m sure Hawking could do the parliamentary arithemetic as well as the next guy. Theresa May has a majority so wafer thin it hangs on a ‘confidence and supply’ arrangement with Six County Creationists and leaves Billy Bunter unsackable at the Foreign & Commonwealth Office. Nor was she exactly spoilt for choice when, last October, her Defence Secretary was outed for sexual misconduct of the serial kind. Said one commentator:

Instead of replacing [Michael] Fallon with an experienced public servant capable of being in charge of the nation’s security, Theresa May promoted one of the most hated men in her party, Gavin Williamson, despite him having no experience as a cabinet minister. A former chief whip, Williamson knows where the bodies are buried.

Given such realities, it really was unfair of Justin Madders to suggest that the late professor was unable to fathom why scrupulously abstemious Jeremy – his admiration for the NHS proved by lining his pocket as a beneficiary of its creeping privatisation – is just as fireproof as Billy B.

6 Replies to “Why Jeremy Hunt still has a job”