I never watch togger any other time, but get excited at world cup games. In a packed pub  in Birmingham on Tuesday night I amazed myself by leaping to my feet to scream “off-off–OFF” after a smirking Barrios head-butted Henderson and escaped with a yellow card. Yesterday, watching the Sweden game, alone but for Jasper at my side, I sent him hurtling from the room in terror with my roaring jubilation at Maguire’s superb header. At least, I presume he hurtled, and that some degree of terror was involved. Truth is, I noticed neither his exit nor absence till, minutes later, he inched hesitantly back with that reproachful look dogs specialise in.

May as well take the op here to have a dig at the Graun: not for its own more juvenile digs at Russia and Putin in its WC coverage, but for the kind of ponderously self conscious literariness too many of its feature writers go in for: a rot which has spread to the paper’s once excellent sports (think David Lacey) contingent. Here’s Barney Ronay on that goal:

When Maguire heads it like that you feel there should be a suitable audio effect superimposed, the sound of a large Victorian wardrobe falling over or a mortar gun pounding the cliffs at Iwo Jima.

Oddly enough, Barney, I don’t feel that. Not one bit.

I agree with the ITV panel’s verdict on last night’s game. Technically, Croatia had the edge but Russia played heart and soul. Best game so far? Spain v Portugal, and not just for Ronaldo’s sublime third goal: though what was especially memorable about that, besides its magnificence of timing and execution, were the camera close ups on the man in those long seconds before he took the kick; a masterclass in ‘mindfulness’. I’m sure I’d detest Cristiano the man but you can’t not be awed by Cristiano the player’s dedication: beyond mere talent, beyond mere hard work. You don’t suppose he cut a deal with Old Nick, do you?

Does this guy, snapped on Sheffield’s London Road last Saturday, pass Norman Tebbit’s infamous cricket test? Probably not, since I don’t recall Pakistan getting its national side to Moscow, far less facing off against England. Still, it’s good to see. And he knew his stuff. In a five minute chat he gave informed appraisals on England players I couldn’t even put faces to. 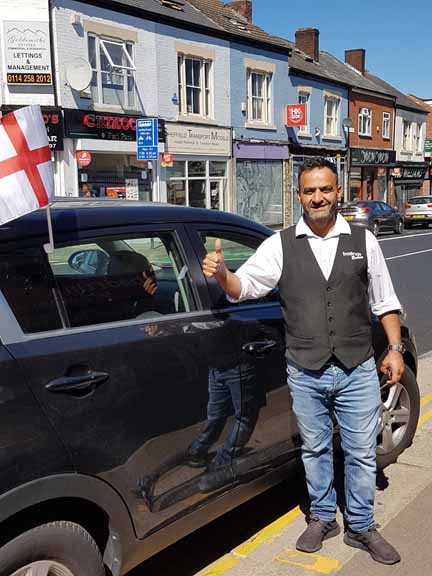