The fact-free traducing of Julian Assange, to whom all progressives owe an immense debt of gratitude, continues in our not so liberal media. Another sound piece from OffGuardian’s Kit Knightly, writing yesterday, begins thus:

Luke Harding and Dan Collyns, writing in the Guardian, have claimed Paul Manafort (jailed former-campaign chief to Donald Trump) met with Julian Assange, the illegally detained founding editor of WikiLeaks, in the run-up to 2016 Presidential election.

Other “news” outlets have, rather predictably, jumped all over it.

WikiLeaks have categorically denied any such meetings took place: 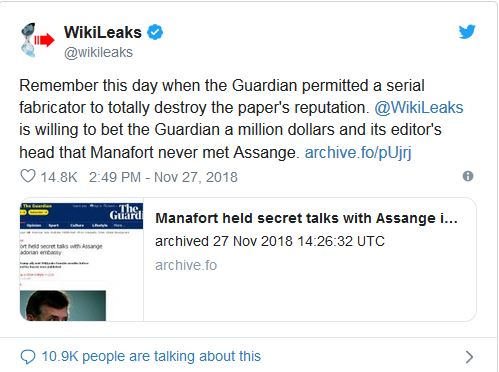 What the article says

So, is there any truth to the claims? Well, certainly not on the weight of Harding’s article. There is no evidence cited, except for the testimony of anonymous “sources” …

… read the full piece at OffGuardian

Meanwhile, the excellent Jonathan Cook has weighed in on this. His own piece today, on the Blog from Nazareth, begins: