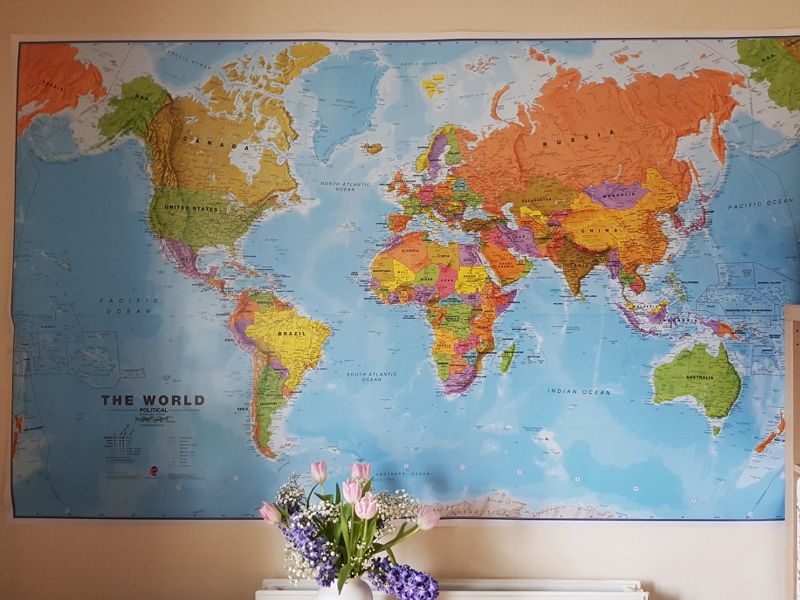 I have a huge map of the world on my wall: 1950 cm east to west; 1200 north to south, Arctic and Antarctic excluded. The other day my brother – great guy and smart with it but, alas, having the slit-window view on the world of those solely reliant on corporate media – came for lunch.

Many know Russia to be the world’s biggest country but, until we see it mapped alongside such as Canada and China, don’t realise how vast it truly is.

“All that space”, said bro. “So why do they want Ukraine?”

Where do you start? I didn’t. I felt momentary dismay but, on my sixty-seventh orbit of the sun, have learned a thing or two about when not to waste my breath. What he and a few hundred million others know of Russian history, let alone Ukraine’s, could be written on the back of a stamp but that won’t stop him. And – oh, the irony – it’ll be me held up as a text book case of weak opinions strongly held. How I suffer in the camp of the Philistine!

“A bit of history helps”, I said, then changed the subject to one where I value his input, and he mine.

But what do you know of Russia? And who told you? I suspect Bro is a Telegraph man, which’d put him a shade ahead of those whose views are fed by Luke Harding et al in the Guardian. But truth be told, the extent of difference is slight. On matters of import to our rulers, mainstream media all sing – for reasons which need not suppose conspiracy1 – from the same hymn sheet.

That’s alarming given on the one hand the hostile choreography on Putin, on the other Russia’s status as a formidable nuclear power. Souls more circumspect – like those whose love of their children extends to not wanting them incinerated, or eking out a few years of bleak existence in some post nuclear wasteland – might see fit to get some triangulation on whether Russia really is a threat to you, me and the bairns; or simply an obstacle to the ‘right’ of a predatory few to imperialise the planet unchallenged.

To this end I offer three reads, all appearing within the last few days. First and, on the criterion of insight into a Russian perspective, most important is this crackling analysis by Dmtry Orlov of Vladimir Putin’s annual address to the Russian National Assembly two days ago.

It appeared yesterday in OffGuardian, where it is preceded by my second read, RussiaGate as Organised Distraction. Written by Professor Oliver Boyd-Barrett, a Dubliner at Ohio’s Bowling Green State University, it first appeared on the Organisation for Propaganda Studies website, one of whose directors is Sheffield University’s Piers Robinson, subject of my pre Xmas post, First they came for the socialists. Impressively documented, as we’d expect from the academic credentials of both its author and the OPS directorship, it does what it says on the tin.

My third and final read, brought to us by Information Clearing House, is shorter, sharper, more  workaday in tone and less ambitious in scope. Again though, the title gives an accurate steer as to content: Russia To Defend Its Venezuela Oil Assets In ‘Toughest Way Possible’.

2 Replies to “Three reads on Russia”