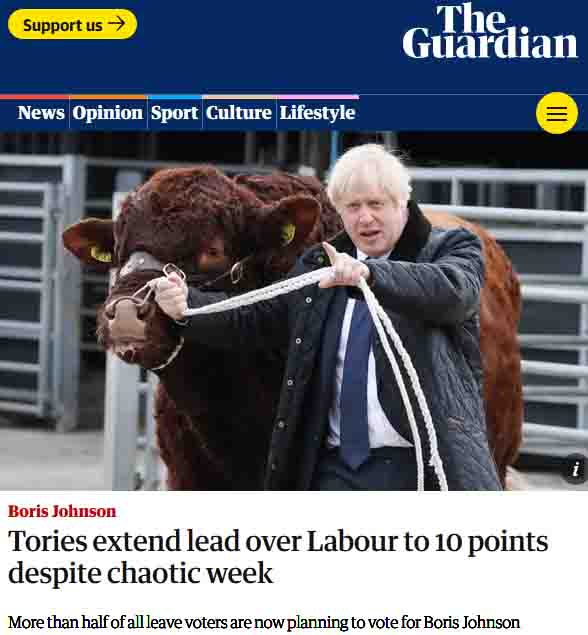 For years I’ve called myself a peg-on-nose Remainer. While many fellow Remainers strike me as naive, deluded on the nature of the EU and frequently contemptuous to boot, my bottom line is that until Left Leavers show how Brexit can be a gain in the here and now for British workers,1 I don’t see how leaving that bankers’ club can be other than a de facto alignment with the most hideous currents in Britain today.

Which is hardly a ringing endorsement of the EU. Nor do I share Yanis Varoufakis’s view that our best option is to seek its reform from within. Though his understanding is deep and, of course, painfully experiential, I deem his diem25 project the clutching at straws of a drowning man.2  As I put it in a post in April:

So what might bring about a re-evaluation of my position?

A major realignment of class forces in Britain is what. This side of a pre-revolutionary situation in the West, something not seen in my lifetime – from Paris ’68 to Occupy to gilets jaunes – the most likely indicator would be the emergence of a powerful voice with a grasp of the true, take-no-prisoners nature of capitalism. That rules out neo-Blairites, Greens3 and Lib Dems. The voice I have in mind has the capacity to reach out to those most shafted, by everything the EU actually stands for, with a nuanced but unequivocal statement of the Left case against it.

That, and a plan to stop Leave being a green light for reaction. One that can be adapted by anti EU progressives across the member states, including the only winners, Germany and Holland, from the eurozone project. And, quite important this, one that does not conjure up rabbits from hats, or otherwise insult my intelligence.

Such are the uncertainties of our times, I can’t say whether that’s a pipe dream or just round the corner. I can say this much, though. Like its sister currents in Europe, it must have deep roots in the organised working class. That may not mean Labour in its current form, of which more in a moment, but will include the socialist wings of that party and the trade union movement. It will also include those on the far left, among them some of the ablest thinkers on the planet, who are willing to let go of sectarianism.

With Labour’s Leavers jumping ship faster than its Remainers – gone the heady days of 2015/16; gone the highpoint of June 2017 – where does it now stand? Many Left Remainers say its leader has let them down. For those who see Brexit of any kind, and under any circumstances, as a calamity of Biblical dimensions, his crime was refusal to commit unconditionally to Remain.

I’ve said in this post and others how colossally uninformed I find that, given the actual nature of the EU as distinct from Remainer fantasies about it, but will add that it assumes a top down party undivided. In its ignorance of how political parties work, it relegates PLP, NEC and every branch member to the status of mere instruments of the will of He Who Must Be Obeyed.

It also ignores the cry of anguish from millions of Leavers in the heartlands, but why bring that up? The Remainers who never heard that cry, and they are many, are unlikely to hear it now.

Then there are far left Leavers who say Corbyn sides with a ruling class whose dominant wing does not, whatever centre-left Remainers may think, want Brexit. They say he has thrown in his lot with Lib Dems, europhile Tories, Greens, SNP and such other Westminster elements as can be rallied beneath the banner of stopping hard – and perhaps any form of – Brexit.

I’ve some sympathy with that criticism, when couched in terms of the limits to ‘parliamentary socialism’.4 But two problems won’t go away. One is my conviction that the referendum result, while hugely significant as indicator of how millions feel, is worthless in narrow electoral terms. See footnote 1 to Last night in the House. It may not be invoked, least of all by socialists, as a sacred covenant. The other is the failure of any Lexiteer of my acquaintance, and I’ve spoken to a good few, to point to anything in the here and now that offers realistic hope of a Left Brexit.

But I’m beginning to repeat myself.

Unlike the forces tearing the Conservatives apart, what is now splitting the Labour Party is not Brexit as such. It is the deep divisions informing it. On June 9, 2016 – just a fortnight before the Referendum – I wrote, in a post headed Labour’s Problems are Britain’s Problems, that:

Neither Corbyn nor neo-Blairites are well posed to win a general election. Blair pulled it off in ’97 not just because he had ‘moderate’ policies, JFK appeal and an electorate tired of the tories. He won because now discredited trickledown economics made a “3rd Way” seem plausible, and allowed the C1/C2 vote to be tapped without alienating D/Es.

His subsequent two wins were with shrinking majorities despite a Conservative Party in disarray under leaders chosen not for electoral appeal but stance on Europe. (Ken Clarke would have posed a more credible challenge to New Labour than Howard, IDS or Hague could ever do.) New Labour ‘realists’ dream fondly of a charismatic leader with centrist policies to woo Middle England and return the party to the glory days. Not possible.

… Britain’s fault lines have deepened … In an increasingly Disunited Kingdom a party may appeal to Middle England or burgeoning underclass but not both; not in sufficient numbers to win elections. The C1/C2s … [have always been able to vote] Tory or Lib-Dem while D/Es, long held to have no alternative to Labour, now have SNP, Ukip and (we can predict) parties further to the right. That Corbyn has such huge grass roots support, and near zero PLP backing, is more a reflection of our fragmented society than of a uniquely Labour problem. Ditto the fact not one of the frontbench rebels voted against the 2015 Welfare Bill.

I’ve seen nothing – not even Labour’s electrifying response to Theresa May’s miscalculation of June 2017 – to change that view, and much to reinforce it. Parliamentary socialism, even of the most insincere kind, seems done for. Not through the shortcomings of this leader or that. Not because its programme isn’t Left enough, or too far Left. It seems done for because Britain is broken by a fracture forty years in the making. A fracture threatening both of the parties which have dominated the UK for close to a century, especially and more immediately a Labour Party now obliged to woo liberal progressives without abandoning what were once its heartlands.

The Tories are under existential threat too – ask Philip Hammond … Amber Rudd … Ken Clarke … John Major – but their agonies are bound more tightly, and over a much longer period, with Europe. What’s more their recovery, once the dust settles on Brexit, is more easily envisaged.

Their fortunes interest me little, however, and I’ll speak no more of them here.

What does any of this have to do with the conditions for a principled switch from peg-on-nose Remainer to enthusiastic – or careful but committed – Leaver? I’m nearly there but let me first summarise the conundrum as set out in this and other posts:

The EU is a capitalist/imperialist club, and as such antithetical to the interests of workers.

This state of affairs cannot be changed from within.

The Leave voice of reaction – let’s call it Rexit – is so strong, so long established, as to have drowned out that of Lexit. Under current circumstances, which may change, a Left led Brexit is no more achievable than EU reform.

Given these realities, here is what would flip me into the Lexit camp:

Recognition by significant numbers within the Labour movement that the circumstances in which Labour was able to gain office during the long postwar boom are gone forever.

Said recognition to galvanise precisely the Lexit movement I refer to.5 The difficulties can hardly be overstated. Past efforts to build a real socialist movement, with deep roots in the organised working class – without which it is doomed to join all the other sects and failed projects littering the Left landscape – leave a sobering legacy. Anyone remember a chap named Arthur Scargill (he walked on water, you know) or his Socialist Party?

The emergence – as consequence, in tandem with or as driver of the above – of similarly rooted tendencies across the member states.

I see these things as unlikely but, precisely because of the turbulence in the Western world, not to be ruled out. I’m with the ghost of Jean Paul Sartre – looking to the future not with pessimism but stern optimism.

In the meantime, may I recommend you spend the next thirty-five minutes of your life hearing what Costas Lapavitsas has to say? Like Yanis Varoufakis he is an economics professor. Like Yanis he has taught (and still does) in London. Like Yanis he was in the Syriza government and saw at first hand the true nature of the EU. Like Yanis he is highly intelligent and extraordinarily articulate. Unlike Yanis he does not believe the EU can be reformed.