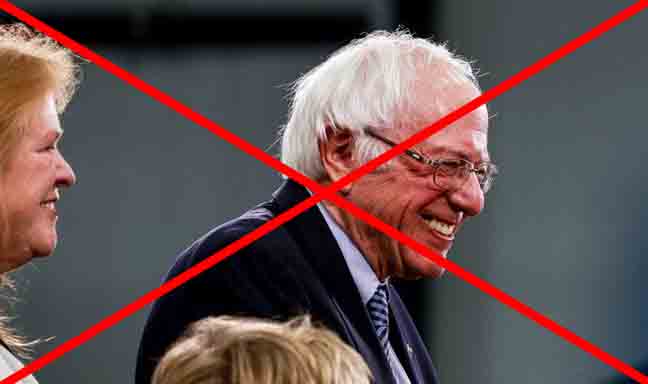 Editor’s note: In order to circumvent internet censorship, today’s Caitlin Johnstone essay has been replaced with an op-ed by Snooty McCentrist of NNC: Obey.

After Bernie Sanders failed to impress in his underwhelming consecutive victories in Iowa and New Hampshire, it’s time for his far-far-left extremist base to grow up and face reality: there’s no way he can beat Trump. Especially with people like me churning out all these op-eds every day to make sure that he can’t.

Face it, Democrats: Sanders is no frontrunner. As the always rational adult in the room Chris Matthews recently pointed out, if you compare his New Hampshire votes to the combined vote total of moderate candidates Pete Buttigieg, Joe Biden and Amy Klobuchar, he’s actually trailing far behind. Sanders clocked in at a paltry 26 percent of total votes, while the triune electoral threegernaut Klobdenbutt amassed a whopping 53 percent. Now, you don’t have to be Andrew Yang to figure out that 53 is more than 26.

That’s not my opinion. That’s math.

If you can’t take it from me, take it from the cold, hard numbers: if Democrats want to beat Trump, they need to nominate a centrist. Someone who rejects the extremes of Bernie’s far left and Trump’s far right and instead espouses sensible, middle-of-the-road values like endless war and military expansionism, rapacious ecocide, corrupt plutocracy, crushing domestic austerity measures, new cold war nuclear escalations, continued deregulation of sociopathic financial and commercial institutions, police militarization, unprecedented levels of imprisonment, Orwellian surveillance programs, internet censorship, and ever-mounting authoritarianism.

You know, the moderate position.

Because think about it, Bernie Bros: if you resist the DNC’s attempt to elevate a sensible candidate like Mike Bloomberg to your party’s nomination just because you don’t want a racist Republican billionaire oligarch authoritarian with dozens of allegations of sexual misconduct against women to be your president, then you’re stuck with Donald Trump.

Chew on that prospect for a minute.

You need to be more realistic, Bernie bros. How can Bernie possibly win when we’re doing all we can to prevent him? We’re telling you he’s not electable, and no one would know better than us: we’re the ones making sure he stays that way …