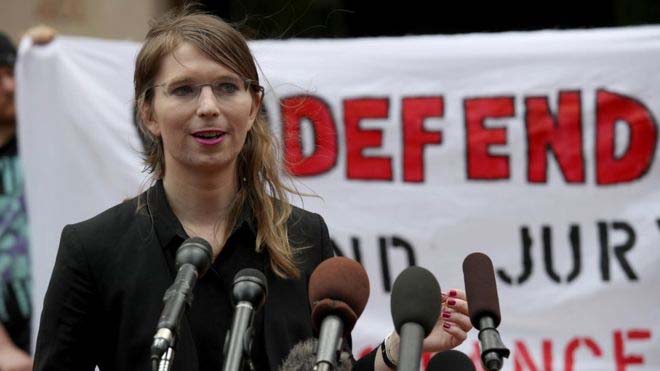 After seven years in prison for exposing US war crimes, Chelsea was re-imprisoned a year ago in an attempt to coerce her to testify against Julian Assange before a grand jury. Judge Anthony Trenga also hit her with fines of  $1,000 for each day of refusal to take the stand – on ground of the secretive nature of the grand jury system.

Now Trenga has ordered her release but ruled that the fines, now standing at $256,000, must be paid despite Chelsea having no savings while an uncertain speaking career was halted by her incarceration. She is moving her few belongings into storage, as she can no longer pay her rent.

This just amounts to a fine on Manning’s supporters, because we obviously aren’t going to let a heroic whistleblower be saddled with crushing debt … There is zero risk of over-donating. Even if Manning manages to get the ridiculous punitive sanctions overturned somehow, and hopefully she can, she’s starting her life over again with nothing after years of unjust brutalization, and she needs all the help she can get.

Indeed she does. You can donate here.

Update 15/3/2020 – the magnificent response, worldwide, to the appeal to pay Chelsea’s fine has meant that, in just two days, more than the quarter million dollars required has been raised.

But the above link accesses another, a fund to help Chelsea – see Caitlin’s comment above – get back her life.