I don’t share [George] Monbiot’s faith in the impartiality of UN agencies and that includes the OPCW. If you deem, as I do, western powers guilty of a dirty war on Syria whose real drivers – like those in Yugoslavia, Iraq, Libya and a barely visible Yemen – had little to do with their sanctimonious rationales, you’ll likely share my scepticism …

For the second time in four days – see War on Syria is based on lies – here in full is a post by Caitlin Johnstone. As with Roger Waters and Brian Eno, I’m thrilled when celebrities I admire in their specific fields have the courage to swim against the imperial tide. Susan Sarandon, for my money one of the most astute actors around, is another one.

It’s been over 72 hours since The Grayzone published new leaks further exposing how the Organisation for the Prohibition of Chemical Weapons (OPCW) has been lying about its investigation into an alleged chemical attack in Douma, Syria two years ago.

These new documents make it abundantly clear OPCW leaders were lying when they claimed ballistics expert Ian Henderson was not a part of the Fact-Finding Mission (FFM) in Douma and played only a “minor supporting role” there. Henderson disagrees with the organisation’s official findings implicating the Syrian government in a chlorine gas attack, finding instead that gas cylinders were “manually placed”, indicating the crime scene was staged, and dozens of civilians the victims of a still-unsolved mass murder.

The silence on these revelations from the OPCW and its usual narrative managers has been deafening. 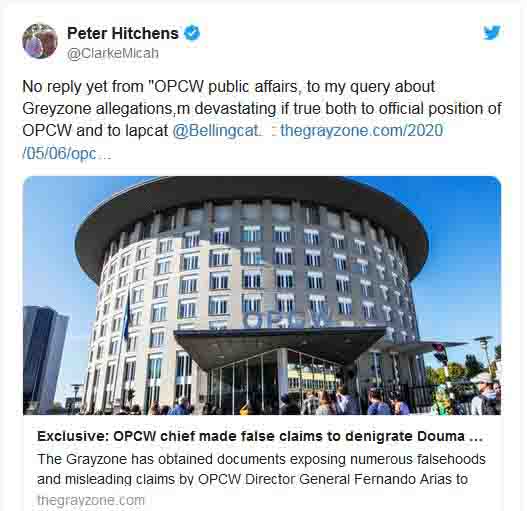 Peter Hitchens, one of the only high-visibility journalists to cover the scandal, tweeted when the documents emerged: “I have requested OPCW public affairs to comment on these allegations, which call into question an important statement by the organisation’s chief and retailed by lapcat Bellingcat about the status of Inspector Ian Henderson.”

“No reply yet from OPCW public affairs, to my query about Greyzone allegations, devastating if true both to official position of OPCW and to lapcat Bellingcat,” Hitchens tweeted a day later.

This silence makes clear that the OPCW, Bellingcat, and all other empire propagandists responsible for managing the mainstream narrative on Syria have opted for the strategy of not responding to the leaks in order to avoid drawing attention to them. This is a very clever (albeit sociopathic) tactic, because western media have already demonstrated a conspiracy of silence on the OPCW scandal, which is a scandal in itself. They know they can keep the leaks out of mainstream attention, nullifying their massive implications for western imperialism going forward, simply by ignoring them.

You can understand their frustration, then, when an immensely popular celebrity uses her giant platform to amplify this highly unauthorized news story. 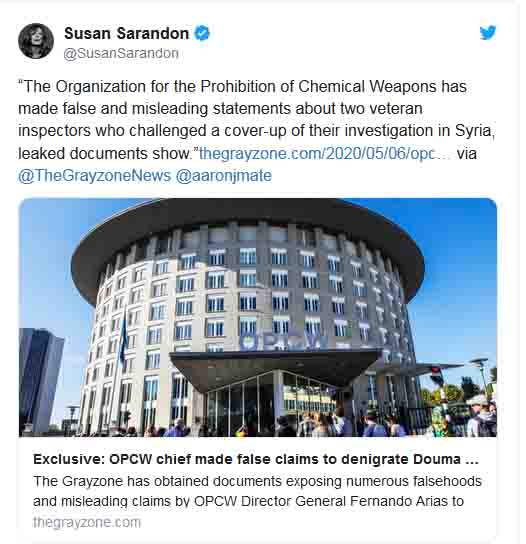 Actress Susan Sarandon has highlighted the latest revelations in the ever-mounting OPCW scandal on Twitter, and the frantic reaction from Syria spinmeisters makes a perfect illustration of the primacy of narrative control for western warmongers.

War reporter Janine di Giovanni, whose promotion of imperialist narratives and fawning puff pieces over the White Helmets propaganda operation have seen her showered with awards, told Sarandon to “refrain from talking about Syria”, making no other argument than that the two have mutual celebrity acquaintances.

“Susan, you are one of my favorite actresses,” said di Giovanni in a now-deleted tweet. “We have friends in common in France via Louis Malle. Please, please refrain from talking about Syria – those of us who worked on the ground documenting war crimes for years (NOT on the regime side) find it excruciatingly. Please stop.”

Again, this is an award-winning professional who publishes in some of the most high-profile outlets in the world, like The New York Times and Guardian. That one so elevated and esteemed would find it normal to publicly cite her friendship with celebrities as a reason for a Hollywood actress to be silent about western imperialism tells all we need to know about journalism today, and the “authoritative sources” amplified by Silicon Valley tech giants over voices which actually challenge power like The Grayzone.

When di Giovanni was called out for her freakish behavior, her response was to accuse every single one of her critics of being “Russian trolls” and delete her post. 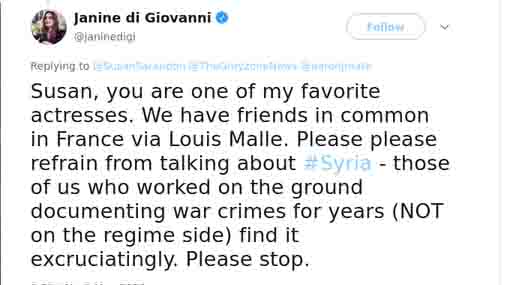 Di Giovanni babbled about Russian trolls and cited mutual celebrity friends because she had no facts or arguments against the information Sarandon was sharing. There is no legitimate reason why people should not be publicly discussing and amplifying important authentic documents, so all they’re left with is various iterations of “shut up”.

Indeed if you look at what people are saying about Sarandon’s tweet, all you find are mountains of vitriol and zero facts or arguments. These people have no interest in truth, only in controlling the narrative about what’s happening in a nation that has long been targeted for regime change by the US-centralized empire.

“I’m sorry it has come to this, Susan. But having explained to you many times why your conspiracy theories are wrong, dangerous, and hurtful, I say without a shadow of doubt you are an idiot without a conscience,” said Idrees Ahmad, his narrative management on Syria so insanely aggressive it has literally seen him threaten oppositional journalists with menacing phone calls to scare them away from reporting on Syria.1

A quick glance through Ahmad’s previous tweets to Sarandon shows his reasons for why her “conspiracy theories are wrong” are those debunked in the article Sarandon shared.

“Ian Henderson, a disgruntled OPCW employee, sent his speculative assessment to the ‘Working Group’. But when the working group tried to establish his credentials, the OPCW confirmed that he was NOT part of the Fact Finding Mission,” Ahmad tweeted at Sarandon when she shared an article of mine on the Henderson leak last year.

“Did you read the OPCW statement where it says the man who wrote it is not part of the fact finding mission? Which means he had no direct access to evidence or the site,” Ahmad tweeted to Sarandon elsewhere.

Ahmad has no interest whatsoever in truth or facts, but only in trying to mitigate the damage done to the establishment narrative control agenda that Sarandon’s tweet caused. Which will surprise no one who knows anything about him.

The only narrative manager who to my knowledge has made any attempt at all to even address the contents of the new OPCW leaks has been Bellingcat founder Eliot Higgins, who took the approach of telling people they cannot see evidence in front of their faces.

“No, it doesn’t show he was in the FFM, this issue is addressed in the OPCW report, he was asked to support the work of the FFM, but he wasn’t part of the FFM,” Higgins tweeted about Henderson under Sarandon’s post.

This claim is directly refuted by the leaked mission personnel list in the Grayzone article Sarandon shared, which very clearly and explicitly lists Ian Henderson as “FFM” under the column labeled “Title”.

So it’s been a revealing ride. We were lied to about Syria, and the narrative managers responsible for manipulating public perception of that lie have been falling all over themselves trying to conceal this obvious fact. Here’s hoping the truth keeps coming into the light, and that those with platforms large enough to punch through the propaganda matrix continue to do so.