Indulge me a moment, will you? At fifteen I acquired a stepmother. We never got on. Her and dad’s insistence that she be called “mum” didn’t help. For the two years we spent in the same house – I left home weeks before turning seventeen – I never addressed her by name or title.

She had dad round her little finger. One ploy was to badger him into making a ruling against me. Once she’d done so, she’d beg him to relent. “Oh it’s alright, Frank. Let him … ” [do/have whatever it was she’d got him to forbid]. But no way was he going to u-turn at this point. A matter of pride, you see. I saw this little comedy for what it was but dad fell for it every time.

And here’s the thing. Maybe she did too. She got her way, but I don’t rule out her motives for that post victory appeal being hidden to – and by – her. My flawed but brilliant teacher said that everybody knows what they’re doing. Indeed, it was so fundamental a tenet he gave it a name: The Law of Volitionality. Yes, he took it to absurd and at times cruel lengths but for all that he was onto something. To manage cognitive dissonance – to maintain a sense of being fundamentally good – we play games with ourselves. Stepmother was likely fooling herself almost as much as dad with her tiresome shenanigans.

It’s not that she wasn’t being manipulative. Just that an essential ingredient of the manipulation, vital to maintaining self esteem, was a decision – volitionally squirrelled away, out of sight from everyday awareness – to hoodwink herself.

And so to the Guardian. Have you noticed how often it plays the same little number? In vilifying China, Russia or Syria it’s right up there with Mail, Express and Telegraph; busily smoothing the warmongers’ path through dubiously sourced stories of evil machinations in Moscow, Beijing, Damascus and any place else that finds itself in the way of US Empire designs.

Only to wring its hands and distance itself from the consequences:

[George] Monbiot has repeatedly denied he wants a military attack on Syria. But if he weakly accepts whatever narratives are crafted by those who do – and refuses to subject them to meaningful scrutiny – he is decisively helping to promote such an attack.

Yesterday the Guardian was at it again. As I and others keep saying, no paper has done more – precisely because it still holds credence with much of the liberal intelligentsia – to dehumanise (an essential precursor to darker acts) Julian Assange, and so ensure that the mockery of justice now nearing its endgame at the Old Bailey is met with such muted protest. 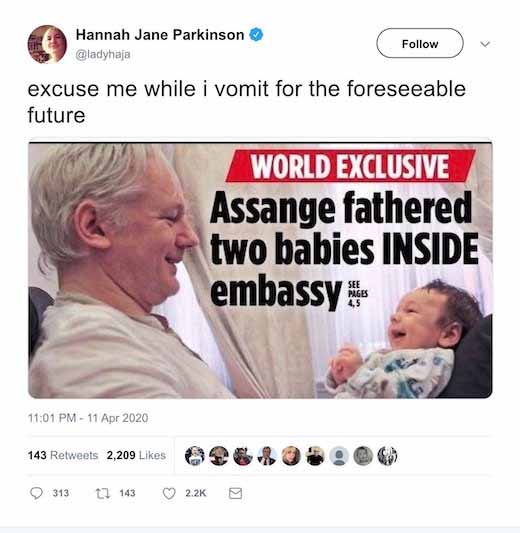 Here’s what it said yesterday. Tucked into one of its few and always slender reports – this one headed, US has never asked Wikileaks rival to remove leaked cables – writer Ben Quinn gives us this:

Prof Christian Grothoff, of the Bern University of Applied Sciences, said it had later been discovered the code could be used to decrypt a “mirrored” version of WikiLeaks’ online encrypted store of cables. The full cache – including classified documents – was made available through Cryptome and another website on 1 September, he said.

Professor Grothoff’s claims, and prosecution efforts to rubbish them, are set out far more comprehensively in Craig Murray’s observations from the gallery on Day 14 of the Extradition Hearing. Where the Guardian report doesn’t even try, Murray does a first rate job of relating a complex and time-critical chain of cyberspace events with a lucidity that allows lay readers to stay with the plot.

The Guardian denied the claim, which has also been made by Assange’s legal team.

I hear Mandy Rice-Davies. They would say that, wouldn’t they?

What’s that? The same goes for Julian’s claims? True – but for two things. One, not a single Wikileaks claim has been falsified, for all the vast resources of a US deep state with every interest in doing so. Two, the Guardian’s denial can only have come from their writers David Leigh or Luke Harding, joint authors of Wikileaks (the book) which trashed Julian Assange.

In it Leigh says he, Harding, Assange and Der Spiegel’s John Goetz were at a restaurant when Assange said anyone endangered by the release of 250,000 unredacted cables “had it coming”. In this kangaroo court that claim has been repeatedly cited by the prosecution as incontestable fact while the one man able and ready to refute it, John Goetz, was barred from referring to it by Judge Baraitser. (Her supervisor, Senior District Judge Emma Arbuthnot, has strong ties through her husband with the military-intelligence complex of which Wikileaks revealed so much.)

Again these things are amply documented by Craig Murray, this time in his Day 13 post.

For his part Luke Harding bears prime responsibility for the Manafort Hoax. So where does that leave us? With this: other than gagged John Goetz and vilified Julian Assange, only two people in the whole wide world are in a position to make the Guardian denial cited by Ben Quinn.

And neither can be trusted.

“The Guardian has made clear it is opposed to the extradition of Julian Assange. However, it is entirely wrong to say the Guardian’s 2011 WikiLeaks book led to the publication of unredacted US government files,” a spokesman said.

“The book contained a password which the authors had been told by Julian Assange was temporary and would expire and be deleted in a matter of hours. The book also contained no details about the whereabouts of the files. No concerns were expressed by Assange or WikiLeaks about security being compromised when the book was published in February 2011. WikiLeaks published the unredacted files in September 2011.”

So a quote in the Guardian – attributed to a Guardian spokesman – refers yet again to matters more thoroughly aired in Murray’s Day 14 post. It’s not just that the Guardian is being lazy. It’s not even just that it shares with other media a stake1 in providing minimalist coverage of a trial with such momentous implications. Rather, the Guardian, pathetically absolving itself even as it voices tepid dismay at US ‘right’ to snatch any individual, anywhere on the planet, for revealing Empire atrocities – while staying tight lipped as the UK cravenly provides ‘legal’ cover for that extraordinary rendition – stands out from the pack in having played so dark a role of its own.

Which leads me back to that deftly inserted sentence:

The Guardian has made clear it is opposed to the extradition of Julian Assange.

But of course! This is why it is (not) covering in vivid detail what Craig Murray rightly calls the serial “egregious injustices” at the Old Bailey, and before that Belmarsh! And why Owen Jones and George Monbiot – forget Harding and Leigh; forget Hyde, Moore and Parkinson – are (not) penning column after furious column, tweet after incandescent tweet, on this daylight kidnap!

But what the Guardian assuredly is doing, is once more placing a marker for when sufficient time has elapsed for the world to wake up to the scale of the injustice, the full enormity of the precedent set. At which point it will remind its readers of its steadfast opposition. How sturdily it condemned the hounding of Julian Assange.

5 Replies to “Julian, Guardian & the law of volitionality”