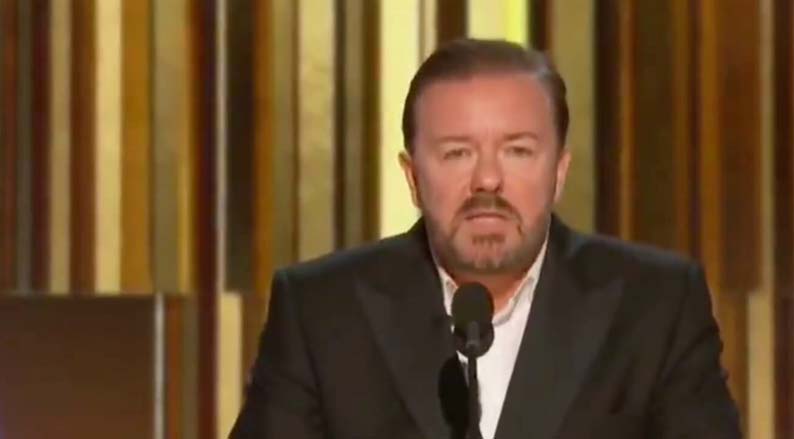 I’ve alluded before now to this exquisitely discomforting night for some, but never got round to giving it a post of its own. Time to put that right. If I’ve seen the highlights once of Ricky Gervais at the Golden Globe Awards, January 2020, I’ve seen them a dozen times. I can’t get enough of his rulebook defenestration as he lays into Hollywood’s great and (not so) good.

Favourite moment? I’m spoilt for choice but if pushed I’d have to single out the look on the face of Apple CEO Tim Cook as Gervais delivers – 06:32 – the killer line:

Apple roared into the TV game with a superb drama about dignity and doing the right thing – made by a company that runs sweatshops in China.

But Meryl Streep, she of the Golden Globe histrionics in 2017 – try this takedown of that little comedy1 – evaded explicit censure.2 I don’t see this as Gervais copping out. He fried bigger fish that night. More likely he had no need to name names when – at 07:00 – he said:

If you win an award tonight, don’t use it as a platform to make a political speech. You’re in no position to lecture the public about anything. You know nothing about the real world. Most of you spent less time in school than Greta Thunberg. So just come up and accept your little award, thank your agent, and your God, and [bleep] off …

One who more deservedly got off lightly was Martin Scorcese. It’s true the host had a jab at his vertically challenged stature. Having quoted Scorcese approvingly – at 03:45 – for comparing today’s cinema to theme parks, he couldn’t resist adding:

I agree – though I don’t know what Martin Scorcese is doing hanging around theme parks when he’s not big enough to go on the rides.

But as camera pans to the space-saving Scorcese, his grin – unsurprisingly, since the praising with faint damnation had been prefaced by “our greatest living director” – is a mile wide.

Others weren’t so blessed. With paedophilia3 a recurring theme, Gervais emphasised one film’s excessive length by solemnly informing us that …

Leonardo Dicaprio went to the première. By the time it was over his date was too old for him …

But if the Tim Cook dig was the one I took the most schadenfraude from, here’s the one which allowed me to apply the much coveted science-and-reason tag to this post. Combining a bitch on how dismal so many current movies are with a plug for one of his own TV shows, Afterlife, Gervais says – 03:10 – that:

You could binge-watch the entire first series of Afterlife instead of watching this. That’s about a man who wants to kill himself because his wife dies of cancer – and it’s still more fun than this.

As the nervous laughter fades, Ricky delivers the real punchline:

Spoiler alert. Season two is on the way, so obviously he didn’t kill himself. Just like Jeffrey Epstein. 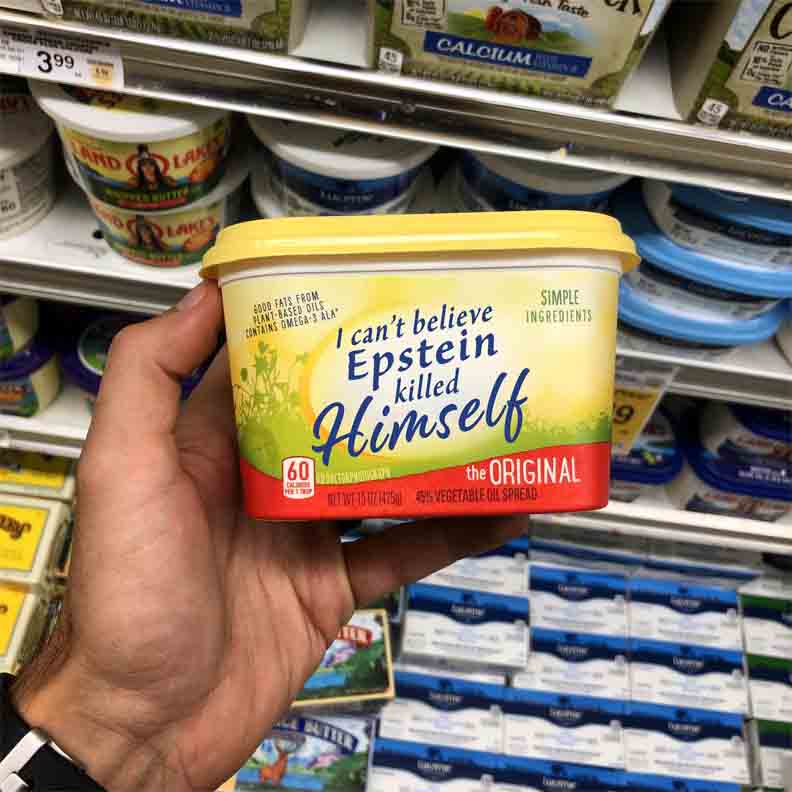 How does this merit the science and reason tag? See my post on the Guardian’s Jill Filipovic. As I’ve said more than once on this site, ‘conspiracy theorist’ has become a handy put-down for the dull witted or lazy minded, allowing them to dismiss an argument with none of the tedious business of addressing its specifics.

Or as Caitlin recently put it, in a piece on mainstream journalists being not so much conscious propagandists as priests to a theocracy, “conspiracy theorist means the same thing as heretic”.

One last point, also meriting the science and reason tag, though for a very different reason. BTL comment on the Golden Globes clip shows people inferring, from the pained grimaces of Tom Hanks, that he too has child skeletons in the closet. I wouldn’t know, and this strikes me as a poor subject for wild guessing. What I am sure of is that the leap of logic, driven in all likelihood by confirmation bias – a fair deduction when cyber lynch mobs offer zero or demonstrably false evidence – is depressing. I detect nothing more sinister in Hanks’s clear discomfiture than the deprecation of an old-school stuffed-shirt at this limey upstart’s lese majeste.

I can’t help thinking of Filipovic and Streep on the one hand, those commentators on the other, as deserving one another. They are two sides of the same wretched coin from which Gervais and the blogger of footnote 1 were put on this earth to deliver us. How? By urging us to think.