Caitlin today. Perhaps I should say this more often but when I refer to America in the context of posts like this – which is to say, in any political context – I mean its machinery of deep state government and above all its ruling class. The latter I define as that tiny group whose income derives not from selling its labour power but from monopoly ownership of one or more of the essential means – liquid capital, stocks, land etc – of wealth creation …

… and as that tiny group in whose interests said machinery, beneath an increasingly transparent chimera of rule by and for the people, actually operates.1

I have nothing against the vast majority of Americans. Indeed, had I a nationalist rather than class perspective, I – a Brit! – would not dare criticise American imperialism. I’d only be inviting vituperative responses along the lines of pots, kettles and black.

But of course, I do have a class perspective.

The Two Faces Of The US Empire 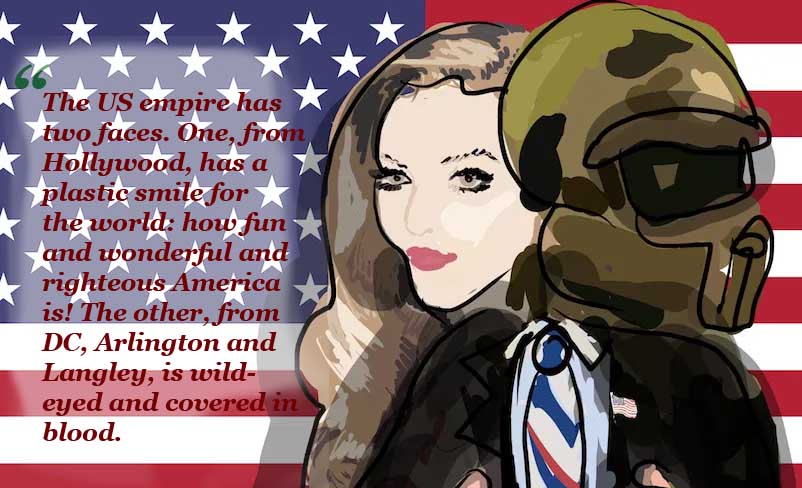 This when Americans report that they trust corporations more than their government or media, when pundits are gleefully proclaiming in The New York Times that “CEOs are now the fourth branch of government” as they pressure the political system to smoothly install Biden, when the leading contender for the Department of Justice’s Antitrust Division is an Obama holdover who went on to work for both Amazon and Google, and when Americans are being paced into accepting an increasing amount of authoritarian changes for their own good.

And this manic celebration and increasing brazenness of corporate power are overlaid atop an unceasing river of human blood as the globe-spanning empire continues to smash any nation which disobeys it into compliance so as to ensure lasting uncontested planetary hegemony.

But hey, at least they voted out fascism.

The US empire is ugly and creepy. The more you look at it, the uglier and creepier it gets. That’s why so much effort goes into keeping the public from looking at it directly.

The US empire has two faces, one rooted in the west coast and the other in the east. The first face, which sprouts up from Hollywood, presents a grinning plastic smile to the world depicting how fun and wonderful and righteous America is and how all its systems are working completely fine. The second face, which sprouts up from DC, Arlington and Langley, is wild-eyed and covered in blood.

Just like any other two-faced monstrosity, the face you will see depends on where you are standing.

If you live in wealthy western nations, or in the US itself, you are mostly presented with the first face. The artificial culture pipeline runs from Hollywood to the rest of the world and keeps everyone seeing American life as fun, enjoyable and packed full of hilarious repartee, interspersed with the sexual attention of beautiful women and kicking bad guys into molten lava. Freedom and Democracy™️. Capitalism is totally working. You can trust these guys to run the world. News at eleven.

If you live in the Middle East, Asia, or in the Global South, you are far more likely to encounter the second face. The blood-spattered face. The face of murder. The face of tyranny. The face whose actions amount to nothing other than an endless war on disobedience, where any government which tries to insist on its own national, military, resource, commercial or financial sovereignty is smashed into the dirt by any means necessary until it either collapses or complies.

People who inhabit the hub of a murderous empire are historically unaware of its horrific nature. In the old days that was because information was easy to restrict access to. Today it’s because information is easy to manipulate and distort. That’s the only difference between this murderous empire and those of old. That and the fact that this one is brandishing about weapons that can end the world with increasing recklessness.

Humanity will not know health and harmony until it knows truth. Until we collectively come to a lucid reckoning with what’s going on in our world, in our nations, in our society, and in ourselves. The movement toward a healthy world is a movement toward becoming aware of things we previously were not aware of. In this case, as a first step, this means collectively seeing behind that grinning plastic mask to the churning death machine underneath.