In a short post – monolithic control at the Guardian? – I set out why that paper, though many of its writers are subjectively sincere, is not to be trusted. I home in on this organ more than any other because in spite of Julian and Jezza (and for the oldsters, Scargill 1 and countless others) it still has the confidence, albeit grudging, of too many of my leftist pals.

As if, given a choice of serving power or truth, the Guardian would – nay, could – choose truth.

It’s true these pals often hurl scorn and cynicism at the Graun. But then, so do most consumers at commercial ads. (That’s why Madison Avenue never turned a profit!!!) But propaganda, be it for commercial or political ends, works at levels of consciousness where scorn and cynicism – the latter all too often mistaken for scepticism – offer scant protection.

(The more so when the biggest lies are of omission. Unless leftists work hard to triangulate sources they will arrive at the conclusions the Guardian, on behalf of the power structures it serves on matters vital to rule by and for the few, wants them to arrive at. And for icing on the cake, said leftists will think they did so all on their own sweet lonesome.)

Commenting yesterday on FB about a Guardian ‘explainer’ of what is happening in Ukraine, Media Lens notes:

The Guardian has a ‘complete visual guide’ to the ‘Ukraine-Russia crisis’ that is – how odd – incomplete.

Try and find mention of: 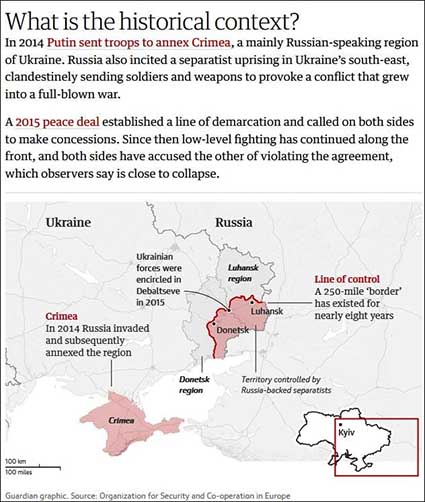 We have an extensive Twitter thread on this, based on a recent FAIR article by Bryce Greene which we posted (again) here this morning.

Nor – this is steel city scribe again, armed with that map I’ll keep rolling out till blue in the face – should we lose sight of the overarching context:

For a grippingly cogent statement of the Russian case, see the eight minute video of Vladimir Putin answering a British journalist’s question: what is the West not understanding here?