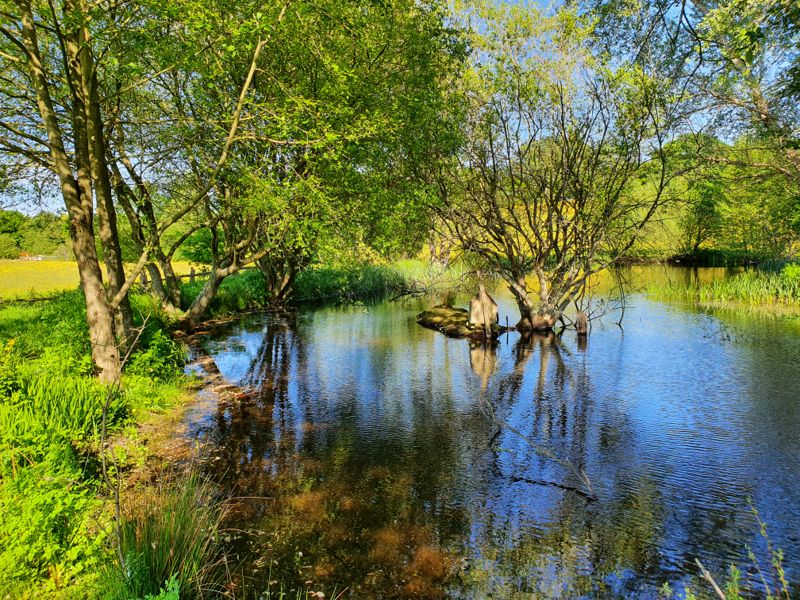 River Brede in East Sussex, close to Battle near Hastings and fifteen miles upstream of Rye

Wise words from a friend of several years, though we’ve not met face to face. Commenting on No way out but war, my May 24 posting of a Chris Hedges piece, Susan O’Neill wrote:

Over the past week I have probably visited a hundred sites and there is so much to observe.

I have been paying attention to some cross party assembly debates in the US and have been very surprised to find so many Republicans speaking out along the lines of [far right Congresswoman, Marjorie Taylor Greene] as mentioned [in the Hedges piece].

Although I understand that staying in office is usually their main self interested concern, unusually they are actually listening to the rif raf who put them in office. It’s not uncommon for the members of the Ron Paul institute to speak out against offensive war spending but that’s usually the Democrats job. The Dems obviously, are defending the ill-Be-gotten Biden and his mindless observations.

Although I have no desire to see the return of the orange menace it would be nice if an adherent of the RP FREE movement did get into power. If the current trend of US Foreign Policy continues, the US, who is now falling behind in every aspect of it’s existence, will inevitably have no other means of clinging on to what it perceives as it’s pre-eminence by aggressive force.

The British based reporter John Ross(aka Luo Siyin) seems to believe that when the US feels less powerful it becomes passive and when it’s successful in it’s military success, it emboldens the US aggressive stance.

This leaves me wondering if it has sunk in that only 30 of the 195 countries opting to sanction Russia and the obvious imminent defeat of their proxy war against Russia and the failure to challenge China’s economic growth will make them more passive as John Ross thinks. I personally am sceptical re his latest article, but one can hope.

I still believe that the US will be more aggressive. Even when confronted by certain outlets blatantly accusing the US of having weaponised the current bird flu and monkey pox after Russia’s pronouncement of having proof of US owned Ukraine labs modifying said strains, those “new” pandemic threats have in fact materialised.

I feel that the US is ratcheting up it’s pressure against the rest of the world as a petulant last throw of the dice before it becomes an empire in ruins(which it is). I can’t help thinking that Washington is incapable of comprehending the obvious, as is so often the case, when people believe unconditionally, despite all evidence to the contrary, that they are invincible and cannot fail.

Chris Hedges is well informed and knows what he is talking about(Zerohedge is one of my sites)and his last sentence is perhaps the one we need to remember.

Burlesque indeed. What will be the price ie. the subordination of WHO?, the UN?, WTO? AI? HRW? in which case where do we turn to for sane responses?

So many weighty debate points here, I’d like to respond to all. For example, Susan notes just 30 of 195 countries opting to sanction Russia: a truth played down by Guardian, Washington Post and all the other ‘liberal’ apologists – or flat out cheerleaders – for US empire, as they speak of an  “international community” … 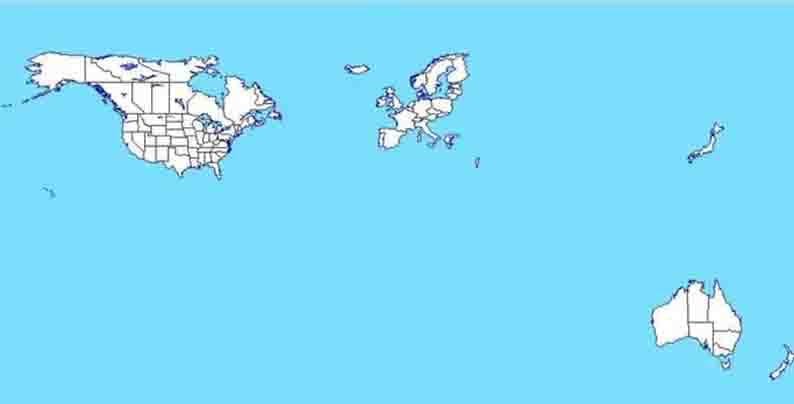 … united in its determination to halt “Russian aggression”.

Pushed for time and – in a reply already overlong – for space too, I chose to address just one aspect of her multifaceted comment.

Although I understand that staying in office is usually their main self interested concern, unusually they are actually listening to the rif raf who put them in office. It’s not uncommon for the members of the Ron Paul institute to speak out against offensive war spending but that’s usually the Democrats job. The Dems obviously, are defending the ill-Be-gotten Biden and his mindless observations.

True, but I’m wary of confusing ‘office’ with power, and believe the truth runs deeper. Not just Chris Hedges but, with even greater gravitas, Michael Hudson and others have been showing exactly why the USA is in this position: where war really is the only way out. In part this is because – as too few Americans or westerners at large have grasped – the US economy is addicted to military spend. Over and above its role in enforcing Washington (i.e. Wall Street) will, the arms sector is central to the American domestic economy and a key means of transferring wealth from the many to the few in one of the most unequal societies on earth – and surely the worst place to commit the heinously anti-American crime of being poor.

(The cluelessness of liberals, lost in the rabbit holes of identity politics, has them seeing each new war as somehow unique and to be considered solely on its own merits; not as part of a much broader and truly terrifying pattern. Hence the interminable arguments about needing to “Take Out the [latest] Bad Guy”, advanced by expensively educated half-wits (a constituency which included me until Syria finally woke me up) who deem themselves well informed by Guardian and Economist. To hear them speak on Ukraine, and before that on Syria, you’d think all the other wars on all the other “new Hitlers” had never happened!)

The other half of the story is that the USA, like Britain but on a vaster scale, has pursued financial imperialism, massively aided by the US dollar as the world’s reserve currency, at the expense of its industrial base. As such it has sown the seeds of its own demise. For one thing its economic warfare – eg confiscating hundreds of billions of assets held by Iran, Russia, Venezuela and other states offending “the international community” (i.e. Washington) – has seen the global south and even parts of the north questioning the wisdom of holding its surpluses in US Treasury bonds or gold stored in the New York Fed …

(Not that London is any safer, as Caracus found to its cost in 2018. That infants will die as a consequence of such fiscal thuggery is played down by Guardian, Economist et al, hence lost on my “expensively educated halfwits”, who speak instead of “failed Chavism” and a deplorably “authoritarian regime” headed by Nicolás Maduro.)

Two, US policies towards China and Russia push those two powers into ever closer ties. In part this is due to political ineptitude: one telling indicator, I’m told, being a decline in state department officials who, in a philistine Beltway climate where “understanding” Moscow and Beijing is now seen as suspect, actually speak Mandarin or Russian. (Which is alarming when (a) nuclear war through miscalculation of What The Other Is Thinking has been with us since Dr Strangelove; (b) senior US politicians now assure us Russia will not use nuclear weapons, regardless of how far or hard she is pushed into a corner.) But to a greater degree I see it as structurally inevitable given the different factions within the US ruling class. Look what happened to Trump when, in the interests of curbing the greater challenge of China, he sought closer relations with Russia. That ruling class is divided not only between neocons and neoliberals but, within both, those who deem Russia or China the greater enemy. (Nope: these divisions do not align neatly with the two parties of that billionaire funded Punch and Judy show too many still mistake for democracy.) So a coordinated and long term policy is not easily pursued; not even by the deep state. The anarchic logic of rentier monopoly capitalism – aka imperialism – in a fading dollarised world affords less scope than did old style colonialism for divide and rule.

Marx was right. There are a myriad ways in which capitalism is structurally incapable of looking after its own interests. In post WW2 Britain, sectors vital to capital – steel, coal and rail – were running at a loss so had to be subsidised by UK tax payers in the form of nationalisation. Now, in this newer manifestation of capitalism’s intrinsically instable and contradictory nature, but here with global implications in a dollarised world underwritten by military might, pursuit of the highest returns – its logic too systemic to be reduced to a morality lesson on ‘human greed’, though greed assuredly plays a vital if subordinate part – has sent US capital, and with it American Jobs, southwards. The hollowing out of America’s rust belt follows iron laws which Mr Trump, for all his bluster – and in this case sincere intent – could do little to reverse.

Three, at an even more fundamental level and outside of its military industrial complex, America’s economy – again like Britain’s – is not just led by rentier capital but crucially dependent on it. A fading of dollar pre-eminence therefore spells disaster at imperial hub and far flung outposts alike. Without empire the prospects for America (and Britain, with its post-Thatcher dependence on ‘The City’) look bleak: a truth Chris Hedges returns to at various points in his piece. Here for instance:

China, Russia, Saudi Arabia, India, and other countries [are extracting] themselves from the tyranny of the U.S. dollar and [SWIFT] … Once the U.S. dollar is no longer the world’s reserve currency, once there is an alternative to SWIFT, it will precipitate an internal economic collapse.

(The more dirigiste economies of France and especially Germany are better placed, but only if they make a seismic break with Washington to pursue policies of enlightened self interest: i.e. of rapprochement with Russia and above all China. Right now the signs of Europe’s elites doing any such thing are few and far between. One of the prime effects – I’d say intentional – of America’s proxy war in Ukraine is to bind Europe more closely to the USA in a deep and lasting betrayal of the interests of Europeans.)

Er, this reply has been longer than I intended. I’ll stop for the time being …

PS, yes I very much enjoyed my mini-break in East Sussex. I highly recommend a visit to Rye, the picturesque port on the edge of Romney Marsh. T’was here that another empire, facing a strong challenge from Bonaparte, had plans to open drainage sluices and flood the marshes in the event of a French invasion. Then someone pointed out that it would be just like those wily frogs to sow rumours of an imminent attack, for the pleasure of seeing countless hectares of arable land and pasture ruined at great cost to perfidious Albion’s ruling class. The whole idea was hastily ditched – yes, I think ‘ditched’ is the right word …

Low tide on the Brede at Rye Harbour, half a mile upstream of its date with the Rother 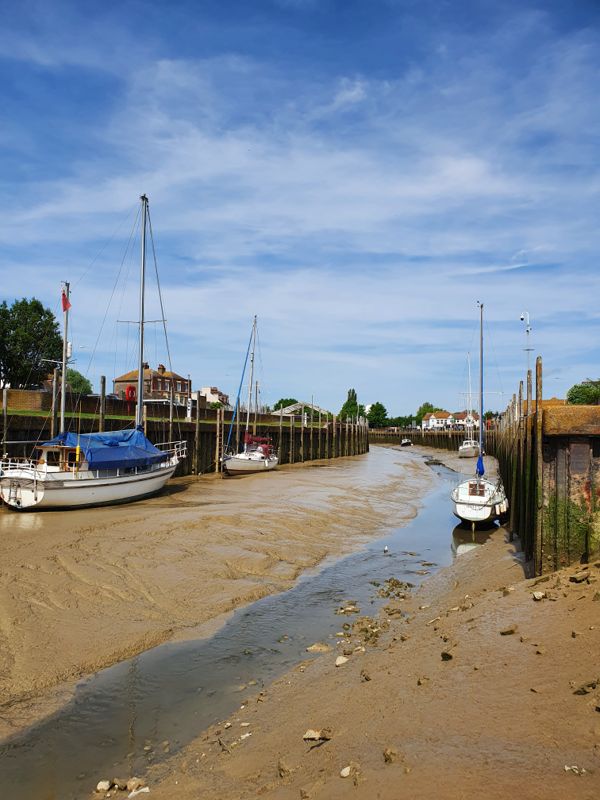 The Rother, now topped up by the Brede, with the tide turning from ebb to flow 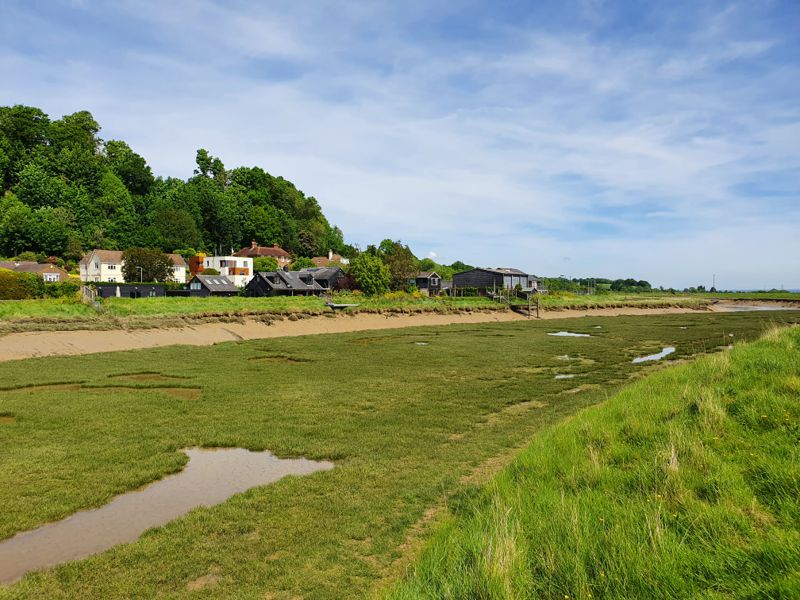 Looking across the Rother, on a rising tide, towards the higher ground occupied by Rye 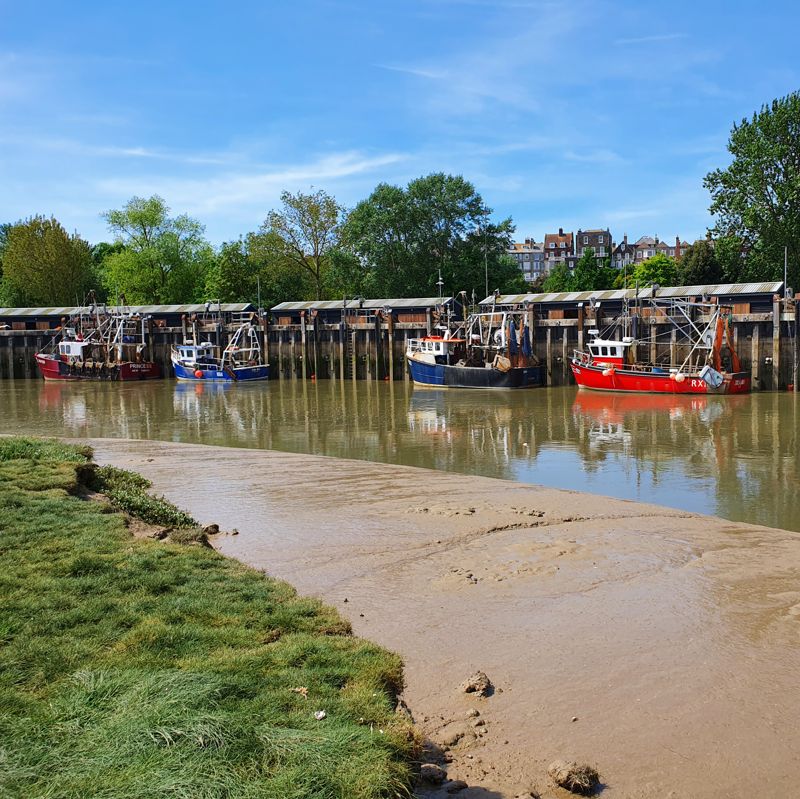 On my way up to the roof of St Mary’s, Rye’s Grade 1 listed church 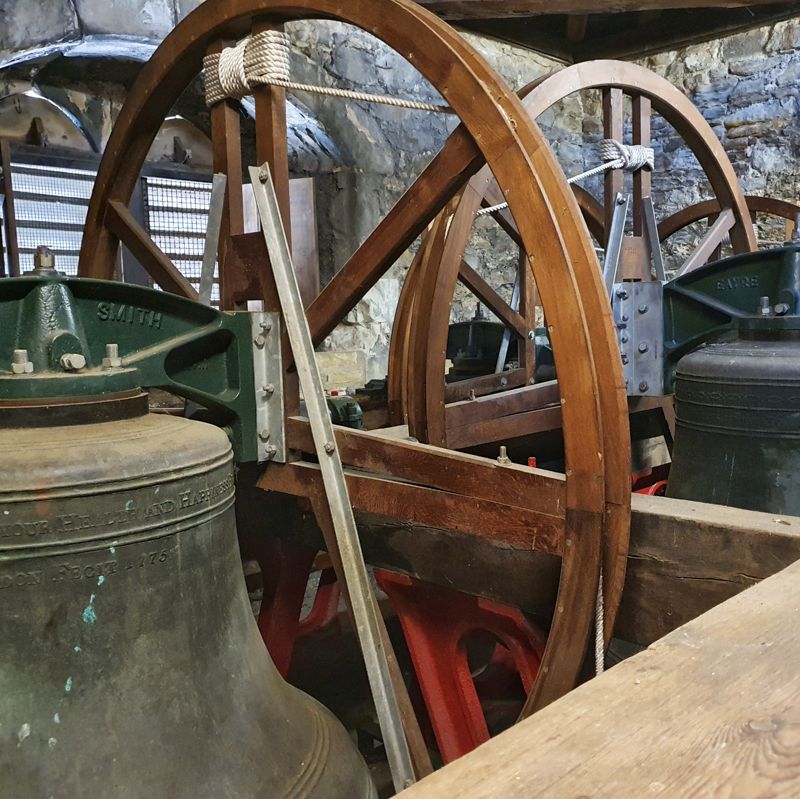 On said roof, the river channels now fast filling. Top right, the Brede on its way to join the Rother (top left) which will in turn enter the Straits of Dover some twenty miles southwest of Folkstone 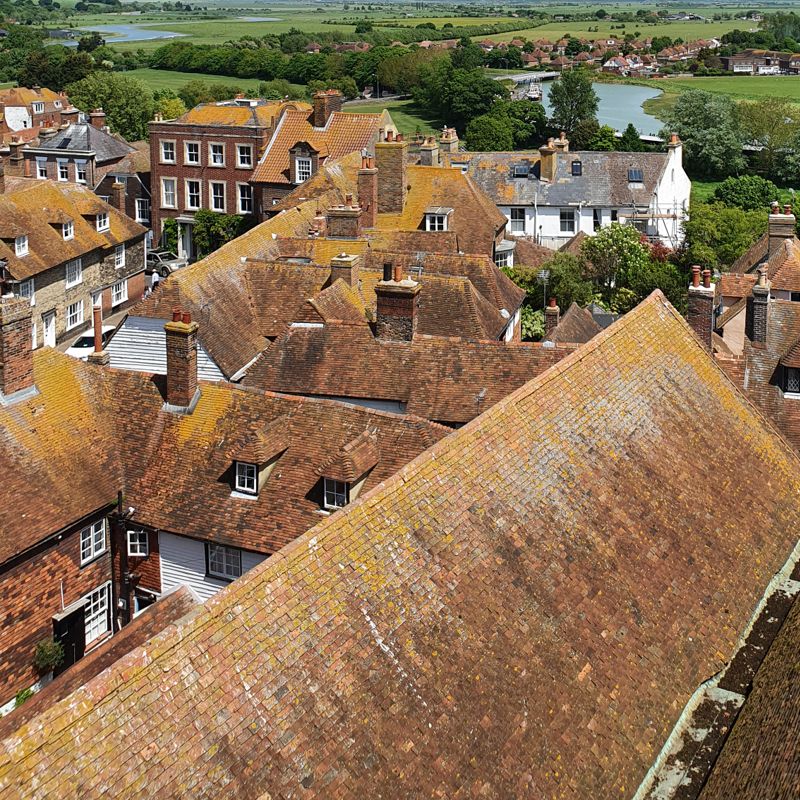 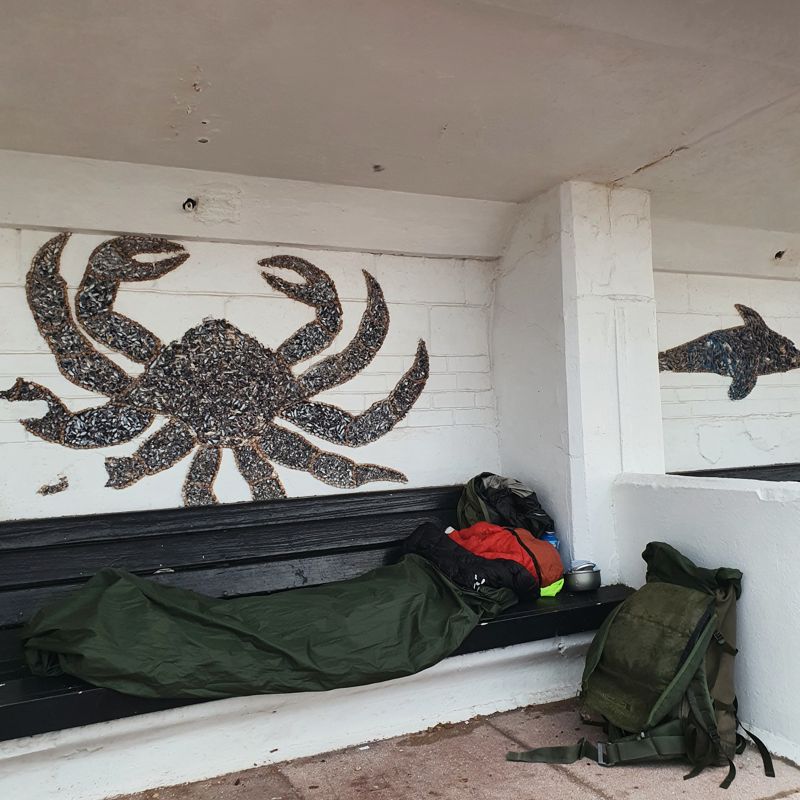 7 Replies to “A little more on the US war machine”