Good question. And while we’re asking it, what about the steel mills too?

What worries American diplomats is that Germany, other NATO nations and countries along the Belt and Road route understand the gains that can be made by opening up peaceful trade and investment. If there is no Russian or Chinese plan to invade or bomb them, what is the need for NATO? What is the need for such heavy purchases of U.S. military hardware by America’s affluent allies? And if there is no inherently adversarial relationship, why do foreign countries need to sacrifice their own trade and financial interests by relying exclusively on U.S. exporters and investors?

As Professor Hudson and several posts on this site have pointed out, a primary aim of America’s proxy war on Russia in Ukraine is to pull Europe more closely into its imperial orbit. Witness the growing discomfort of Europe’s leaders in light of the increasingly evident truth that, to further Washington’s drive to curb Eurasia rising, Europeans are paying a higher price than Americans. Mostly the focus, understandably, is on soaring energy costs for householders courtesy the economic war said spineless leaders have, to the crystal clear detriment of their citizens, signed up for.

(And as Britain is now learning, those costs are aggravated by its neoliberal pricing structures in the privatised energy sector.)

But energy poverty for domestic end users is the tip of the iceberg, as economist Yves Smith – aka Susan Webber – argued two days ago on the Naked Capitalism website.

European Stainless Steel Mills Are Closing Due To Energy Crisis

Normally we relegate the tally of sanctions-war casualties to Links, but the fact that another European industry sector, stainless steel makers, is biting the dust, is noteworthy in demonstrating how quickly the damage of high energy costs is propagating through European industry.

Flower-growers in the Netherlands are already wilting. Recall that flowers are the single most important agricultural export for the Netherlands. And as you can see, the damage extends to other greenhouse-grown exports. From Bloomberg yesterday:

The Netherlands, the world’s top flower exporter and one of Europe’s largest producers of fresh fruit and vegetables, is warning of a steep output plunge as crippling energy costs stifle the country’s extensive network of greenhouses.

Royal FloraHolland, the world’s largest flower market in Alsmeer, estimates Dutch flower production will drop by up to 40% between Christmas and next spring due to the rising costs of maintaining greenhouses, spokesperson Michiel van Schie told Bloomberg.

The expenses of heating and lighting the glass structures that sprawl over an area equivalent to 17,000 soccer fields now make up as much as 70% of the cost of most greenhouse crops, more than double that for last year, according to industry group Glastuinbouw Nederland….

Soaring costs are also making the sale of energy contracts to other users more profitable than growing plants as agreements signed later in the year are expected to be even pricier. “I was told of one farmer who sold his energy contract, which he’d fixed for several years, for 35 million euros,” Schie said.

The drop in production means growers in sunnier climates such as Spain and Morocco are likely to grab a share of lost output from the Netherlands, a lucrative market where exports of greenhouse produce amounted to 9.2 billion euros ($9.5 billion) in 2020. Nevertheless, any shortages will further stoke inflation across Europe, where food prices have already soared 11% from a year earlier in a cost-of-living crisis that shows little sign of easing.

And speaking of not easing, Gazprom has not turned Nord Stream 1 on schedule, with the EU screeching bad faith. Even if true, perhaps they should consider returning the central bank assets they took to square the ledger?

Unlike the reduction in flow to 60%, which Siemens tacitly admitted was due to a turbine taking a trans-Atlantic trek for repair, and the next ratchet down, which Siemens did not challenge, this time the German giant challenged Gazprom’s position. From the Financial Times in Russia indefinitely suspends Nord Stream gas pipeline to Europe:

The company said the shutdown was because of an oil leak discovered in the main gas turbine at the Portovaya compressor station near St Petersburg, which feeds the line that runs through the Baltic Sea to Germany.

However, Siemens Energy, which manufactures and maintains the turbines that power the pipeline, cast doubt on this explanation.

“Such leakages do not usually affect the operation of a turbine and can be sealed on site,” the German company said. “It is a routine procedure during maintenance work. In the past, the occurrence of this type of leakage has not resulted in a shutdown of operations.

“Irrespective of this, we have already pointed out several times that there are enough additional turbines available at the Portovaya compressor station for Nord Stream 1 to operate,” Siemens Energy said.

To play devil’s advocate, it does not appear Siemens has been on site. And Russia has been complaining for weeks that there are other turbines at the Portovaya compressor station that need to be repaired that it can’t send out since Gazprom has not gotten a proper sanctions waiver and other documentation for its globe-trotting turbine, so it’s not clear how many of the backup turbines, if any, are actually in working order.

Moreover, given Stuxnet, if I were Gazprom, I’d be very nervous about reconnecting any equipment that was out of my hands after the war started in an unfriendly country, particularly given how long the turbine was held in Canada. From Wikipedia:

Stuxnet is a malicious computer worm first uncovered in 2010 and thought to have been in development since at least 2005. Stuxnet targets supervisory control and data acquisition (SCADA) systems and is believed to be responsible for causing substantial damage to the nuclear program of Iran. Although neither country has openly admitted responsibility, the worm is widely understood to be a cyberweapon built jointly by the United States and Israel in a collaborative effort known as Operation Olympic Games.

Stuxnet specifically targets programmable logic controllers (PLCs), which allow the automation of electromechanical processes such as those used to control machinery and industrial processes including gas centrifuges for separating nuclear material. Exploiting four zero-day flaws,[6] Stuxnet functions by targeting machines using the Microsoft Windows operating system and networks, then seeking out Siemens Step7 software. Stuxnet reportedly compromised Iranian PLCs, collecting information on industrial systems and causing the fast-spinning centrifuges to tear themselves apart. Stuxnet’s design and architecture are not domain-specific and it could be tailored as a platform for attacking modern SCADA and PLC systems (e.g., in factory assembly lines or power plants), most of which are in Europe, Japan, and the United States. Stuxnet reportedly ruined almost one-fifth of Iran’s nuclear centrifuges. Targeting industrial control systems, the worm infected over 200,000 computers and caused 1,000 machines to physically degrade.

Given the offer of Nord Stream 2, I find it hard to take EU leaders’ whinging seriously, even if Russia is engaging in “dog ate my homework” level excuses about shutting off Nord Stream 1. They see the announcement of G7 plans to implement their barmy price cap on Russian oil as the reason for Russia’s action.

As as aside, it appears not to have occurred to the G7 that this scheme is also aimed at the Saudis. If Russia were to capitulate, the price cap would greatly undercut Saudi oil. Even though the Russians have simply said they won’t sell oil to countries that try to dictate prices, the Saudis could signal their unhappiness with buyer efforts to muscle prices by cutting production.

As Kevin W noted by e-mail:

I’m thinking that the Russians have had enough because of the refusal of the EU leadership to start any negotiations and have now turned up the pain dial to 3. And that crackpot raid 1 pretty sure on that nuke plant was the game changer, particularly how that story has been so heavily censored in the west. That and that oil cap idea not going away.

With the Russians, the US has earned itself the moniker of being agreement-incapable but is there a Russian word to describe negotiation-incapable that they could label the EU with? Long term it may be better for the Russian to do this or else there won’t be much industry left in the EU by spring.

A final reason for the normally patient Russians to be engaging in tit for tat is Ukraine is shelling the pumping operations that provide water to Crimea: 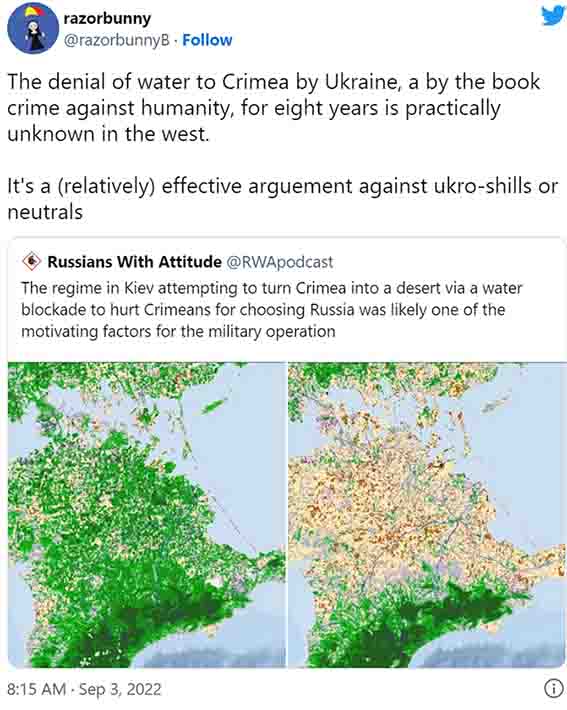 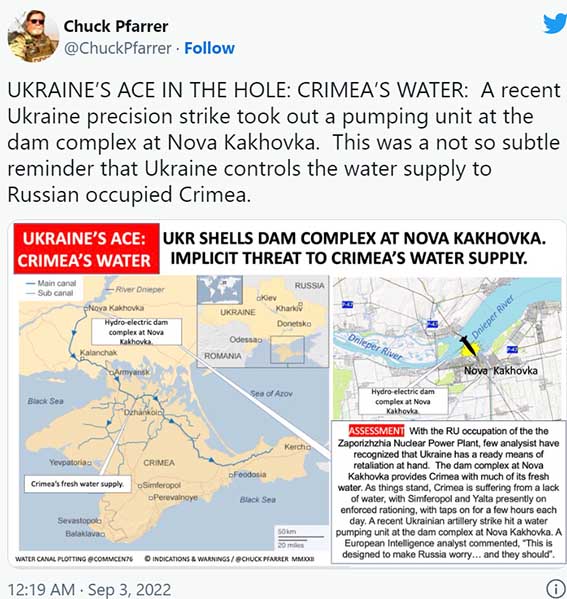 A tad abruptly, perhaps, Ms Smith moves from water on the Crimean Peninsula to steel mills in what remains of Europe’s industrial heartlands. She does so by finishing with a passage from a commercial price watching site:

By AG MetalMiner, the largest metals-related media site in the US according to third party ranking sites. Cross posted from OilPrice

Stainless steel prices continue to struggle as we approach the final quarter of the year. Meanwhile, nickel prices float just above their 2021 average, closing August at $21,320 / mt. Both indices seem to indicate an overly-cautious marketplace, with buyers and sellers seemingly waiting to see what the other will do.

This sort of “commodity” standoff is less than ideal. MetalMiner has recommended that buyers of flat-rolled stainless expect lower transaction prices as we move into autumn. After all, alloy surcharges are low, and competition between service centers is higher. In fact, many U.S. flat-rolled mills have no customers on allocation, thanks to imports affecting overall supply.

Still, the battle between supply and demand is a never-ending one. And in a tight market full of people looking to maximize their dollar, anything can happen.

What would happen if the stainless steel market suddenly lost millions of tons of production? We won’t have to wait long to find out the answer because it’s already happening. As August ended, more and more reports came in detailing European stainless steel producers having to scale back or shut down production altogether.

Of course, Europe faces a catastrophic energy crisis. While many economists remain focused on the coming winter, Putin’s retaliatory gas cutoff has done plenty of damage already. So far, around three million tons of Europe’s stainless steel capacity is at risk. With energy costs surging, many plants simply can’t afford to “keep the lights on,” so to speak.

Earlier in August, the Belgian Aperam Mill shut down its mill in Genk. Soon after, they reduced production at their Chatelet Mill. More recently, Spanish company Acrinox announced it would cut production and place around 85% of its employees on short-time work. Obviously, all eyes are now on other major European producers, many of whom have just as much incentive to cut and run.

Geeky note. The Pete Seeger song, most famously covered by Joan Baez, was inspired by his reading of Mikhail Sholokhov’s novel, one of fewer than a dozen I’d cite as having profoundly influenced my youth, And Quiet Flows the Don.

(One day I’ll get round to a post on those novels and why, encountered often serendipitously as if some invisible hand was guiding my choices at the public library, they had so lasting an effect on my development. One of the earliest, just to give due warning, was Harriet Beecher-Stowe’s Uncle Tom’s Cabin. Another was Her Benny, by the Victorian moralist Silas K Hocking. Others are more orthodox, like Huckleberry Finn, Catch-22, The Tin Drum and Howards End.)

What had so moved Mr Seeger was a passage in which Cossack soldiers, returning to the front in Russia’s civil war, sing a folk song: