I’ve a habit of saying I’ll do something, only to be diverted by something else. A two year delay in my post on whether, on consideration, I still think 9/11 ‘truthers’ deluded is a case in point. More pressing is a long threatened post on the labour theory of value, and why it matters for reasons including but by no means confined to its central place in capitalism’s exploitation – at point of wealth production rather than wealth distribution – of the many by the few.

… of which I can at least say I’m continuing to research. I just might have to hole up in a hotel in the back of beyond – Slough or Hartlepool, say – with all my notes. If so I’ll include a copy of the post below, read yesterday on OffGuardian. I immediately emailed its author, barrister James O’Neill, to thank him for a piece “lucid, informative and sober in tone while giving ground for cautious optimism” – and to seek his permission, kindly granted, to reproduce it here. Do please read. In its quiet way it is deeply subversive of mainstream and perilously misleading narratives on Russia, Iran and China …

(Maps added by steel city scribe. Two terms may be unfamiliar. Littoral  means pertaining to the shoreline, so a littoral state to the Caspian is one which borders on that inland sea. Inter alia  means ‘amongst other things’ – James O’Neill, remember, is a lawyer!)

On 12 August 2018 the five littoral states to the Caspian Sea (Azerbaijan, Iran, Kazakhstan, Russia and Turkmenistan) signed an historic agreement governing the use of the Caspian Sea. The negotiations had been ongoing for more than 20 years. 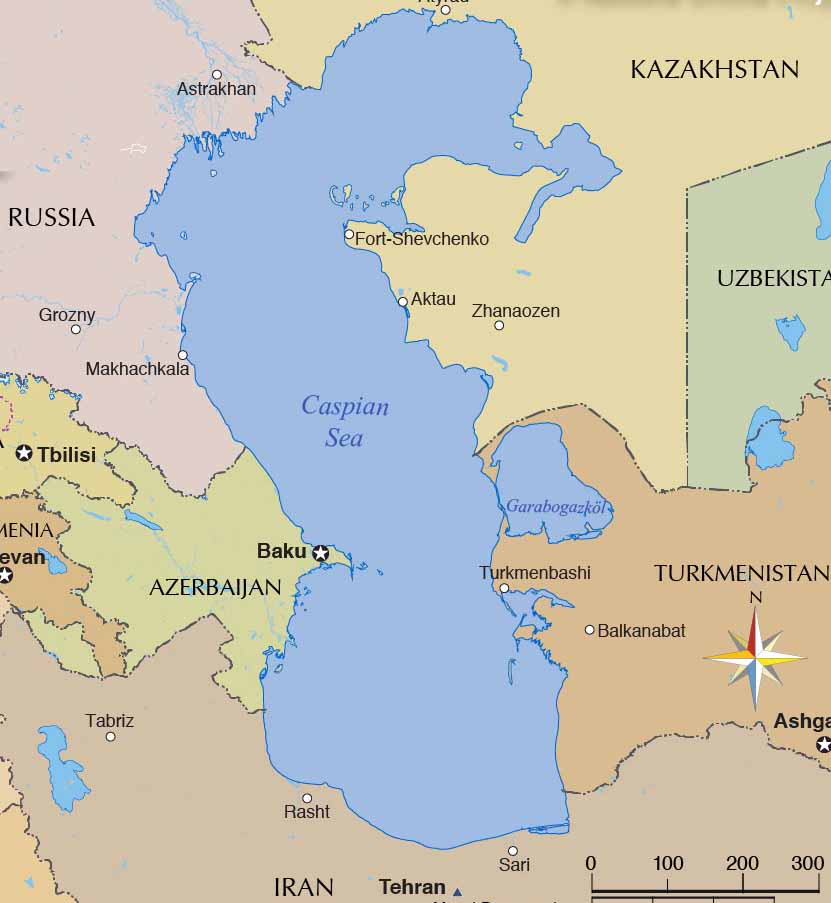 One of the issues was with [sic] the Caspian should be regarded as a sea (it is salty but completely enclosed) or a lake. If the former, then it would be governed by the international law of the sea. If defined as a lake, then the resources would be divided equally between the five States. In the event, the five nations agreed to accord it ‘a special status,’ neither lake nor sea. Whether this unique formulation will be recognised by non-littoral States is an open question.

There are several significant elements to the Caspian Sea Convention (CSC) that are worthy of note. The first aspect is the size of the resources at stake. The Caspian Sea basin is known to hold 50 billion barrels of oil in proven reserves, and nearly 9 trillion cubic metres of natural gas. To put that in perspective, the gas reserves are greater then the entire known United States reserves.

The agreement signed on 12 August gave each of the five states a 15 nautical mile exclusive territorial zone, plus a further 10 nautical mile exclusive fishing zone. The balance of the sea area was for common use. Its economic development would therefore be a joint exercise with the benefits equally shared. A Caspian Economic Forum was also established to determine, inter alia, the practical means and effects of such cooperation.

The second aspect of the agreement relates to security arrangements. All non-littoral States are forbidden to have foreign military bases. This is specifically directed at NATO, which continues its encroachment and attempted encroachment in all nations with proximity to Russia.

Russia is the underwriter of security in the Caspian, a factor that increases its geopolitical strength viz a viz other nations, and in particular Iran that is looking increasingly to secure arrangements unaffected by the unilateral sanctions imposed by the United States.

Both Russia and China are developing closer economic and political ties with Iran. Both countries have made significant investments in Iranian infrastructure and resource development. Iran is also a pivotal State in China’s Belt and Road Initiative. Neither Russia nor China are likely to tolerate overt aggression against Iran of the type advocated by some of the more extreme neocon elements of the US administration.

That does not preclude those same elements increasing the intensity of the hybrid warfare waged against Iran for many years, including overt support for the terrorist MEK group. Hybrid warfare is also the main means by which the US will seek to undermine China’s Belt and Road Initiative, as overt warfare is now, as the Rand Corporation acknowledged recently, “unthinkable.”

The leaders of Iran and Kazakhstan also held separate meetings, an object of which in part was to establish economic links bypassing the United States dollar. This also reflects a developing trend of a move away from the US dollar, the ramifications of which are potentially enormous.

The third major consequence is in the links between some members of the CSA and related Eurasian organisations. Iran had earlier this year signed a free trade agreement with the Eurasian Economic Union, (EAEU) two of whose members, Kazakhstan and Russia are also parties to the CSC. Iran is an observer State (and likely full member soon) of the Shanghai Corporation Organisation. That organization’s full members include CSC States Russia and Kazakhstan, as well as neighbouring Pakistan and fellow SCO observer State Afghanistan. A resolution of the long running Afghanistan war will require the co-operation of Afghanistan’s Central Asian neighbours, all of whom are members of the SCO.

The CSC therefore represents a further step in the significant shift of geopolitical power to the Eurasian heartland. Although China was not a party to the CSC it is nonetheless the dominant economic power in the region, with close ties to the CSC signatories, particularly through the SCO, but also with non-member States such as Turkmenistan from whom it is a major importer of natural gas.

Although there are important differences between the Caspian Sea and the South China Sea, there are also lessons that can be drawn. Following the recent ASEAN meeting in Singapore, the ASEAN nations and China announced that they had agreed upon a new draft code of conduct for the littoral States of the South China Sea. Those negotiations had also been very lengthy.

The draft code of conduct underscores the importance of those nations most affected by the issues in dispute being the ones best able to formulate a resolution when they are able to do so. Those negotiations arguably have a better chance of success, absent the involvement of outside countries such as the United States and Australia. The actions and statements of those two nations demonstrate an inability to promote a peaceful resolution of the South China Sea issues, preferring instead a provocative and confrontational methodology.

The Caspian Sea Convention and the South China Sea code of conduct provide evidence that an alternative model is available.

James O’Neill is a barrister at law and geopolitical analyst. He may be contacted at joneill@qldbar.asn.au

9 Replies to “Geopolitics in the Caspian Sea”