A version of this letter can be seen in Off-Guardian. Its thrust – that while I share the latter’s concerns over irreversible inroads on civil liberties, I also share Left outrage over capitalism’s exposed inadequacies – is common to both versions. Off-Guardian responded in open-hearted and comradely spirit to offer space on its site. Changes in that version are unprompted by any attempt to influence me. Mine alone, they have to do with removing allusions to personal matters I regard as settled, and in any case were always secondary.

People abandoned the Guardian because of its in your face bias towards particular narratives to the exclusion of others … It remains rare, if ever, that the Guardian will publish anything which contradicts its favoured house narrative/company line.

An observation which is not, unfortunately, limited to the Guardian these days.

There was a time not so long ago when this blogsite was not the the only place where the writings of the site author could be read, perused and commented on in the context of a wider active readership. That is no longer the case …

In the spirit of scepticism it seems reasonable to claim this is because the writings of this blog’s author don’t fit a particular company line and narrative. Just like with the Guardian.

BTL comment by Dave Hansell, an Off-Guardian and Steel City reader, on my recent post, Science for the righteous

I’m one of your many fans. I support you through recommendation to friends and readers, links to your articles and a monthly s/o. Granted, that last is for a piddling amount but I am an OAP, and like to think every little helps.

I have also written dozens of posts which gave you good quality content, me a wider audience. Naturally, this has necessitated correspondence with all three editors – Catte, Kit and Vaska – in the course of which I’ve come to regard you all, though we haven’t met, as friends. Unusually intelligent ones at that.

Then along came Covid-19. On which you’ve posted a lot of good stuff, referenced in my own posts on the subject. It has, however, focused exclusively on one aspect of the pandemic: the very real concern that our rulers are using it to remove hard won liberties. (One notable caveat here is that Vaska’s prodigious and always thought provoking output on Facebook suggests a dissenting take, a point I’ll return to.)

It’s an important aspect, and I’ve learned from the opinions of scientists like Bhakdi, Wittkowski and many other questioners of the mainstream narrative featured on Off-Guardian.

I have, however, given equal weight to a Left voice ignored or derided at Off-Guardian. Whether or not the pandemic is being overstated – and my view is that it’s too early to call either way – it shines a torch as never before in my lifetime on the rottenness of capitalism, with its systemic inability to put people before profits.

It’s true this same Left has done the mirror opposite. Its focus on capitalism’s failures does not in logic require that it play up the severity of Covid 19, just as your libertarian instincts do not in logic require you to play down the same. Yet in practice – for we are as much psychological as logical animals – things don’t work that way. We determine what’s important and what is True – in that order – then go hunting for evidence to prove We Are Right and They Are Wrong.

Screenshot from Off-Guardian taken on April 17

As Dr John Lee said in his recent Spectator piece:

A theory from a group of scientists is just that: a theory. Believing the opinion of that group without critical verification is just that: belief.

As it happens, the thrust of Dr Lee’s piece favours those who question social distancing and the science informing it. But as I said in Science for the Righteous:

Dr John Lee flags up a truth none of the camps – lockdowners, herd immunitists, ‘no-worse-than-flu’ pundits – may claim as their property.

These however are epistemological matters. Important ones, vital in fact, but though it pains me to say so, my concerns go beyond epistemology. History may show who is right and who wrong on the question of Covid-19’s severity. Ditto on whether measures taken in the name of seeing it off will outlive the pandemic to hammer further nails in the coffin of liberty.

On these matters we may indeed “pick the wrong side”. Which side that is, we can’t yet know. But to lose sight of the fact a debating opponent may be wrong, but wrong in all good faith, is to take a scary step toward the very totalitarianism Off-Guardian fears. 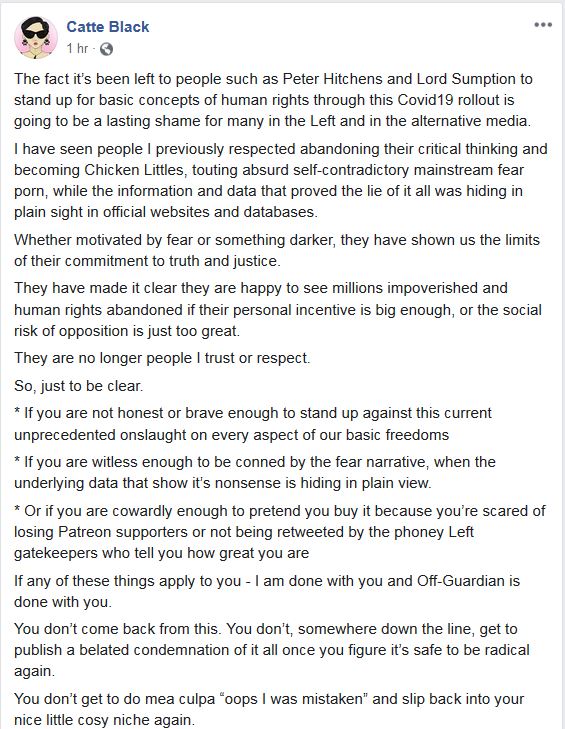 So let me finish with three questions. One, am I among those Catte advises to go to hell? Two, is Dave Hansell correct in surmising that “because [my] writings don’t fit a particular company line and narrative [Off-Guardian’s]” I am blacklisted? Three, is there an editorial rift between Catte and Kit on the one hand, Vaska on the other? 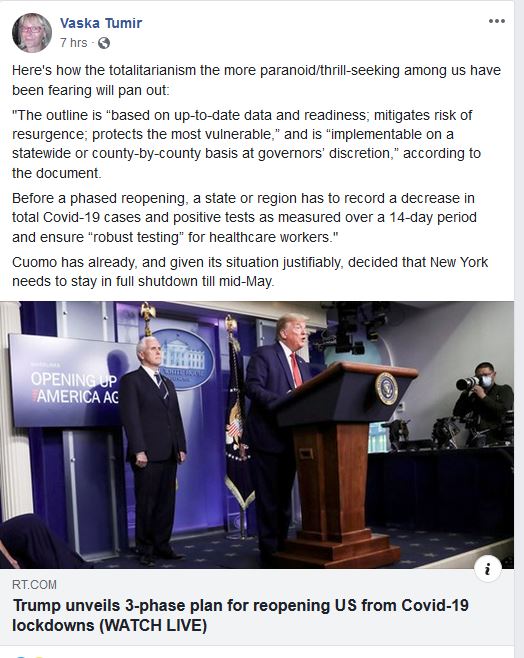 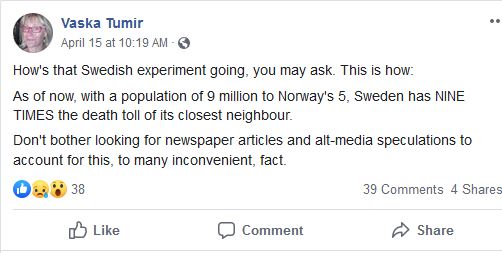 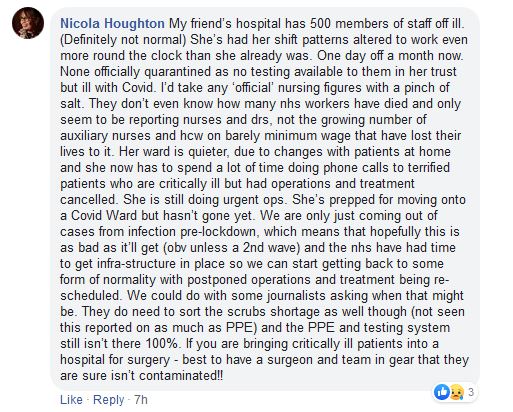 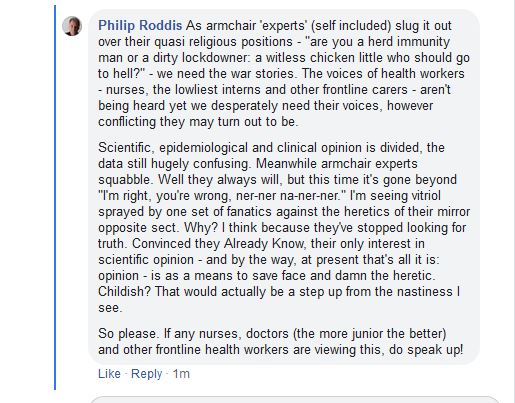