So “international opinion” castigates Belarus after this Sunday’s forced landing – without doubt a despicable and alarming act1 – of a plane carrying a wanted man, who was then arrested.

As ever it fell to Russia to point out the double standards at work here. Those not totally sense-addled by the hypocrisy and selective outrage2 of our media, and the interests they ultimately answer to, may recall a precedent for Belarus’s act. Here, auto-translated by FB, is the always impressive Maria  Zhakarova3 to remind us of what Bertie Wooster would call the “in and out running” of Western responses to the Belarus incident. 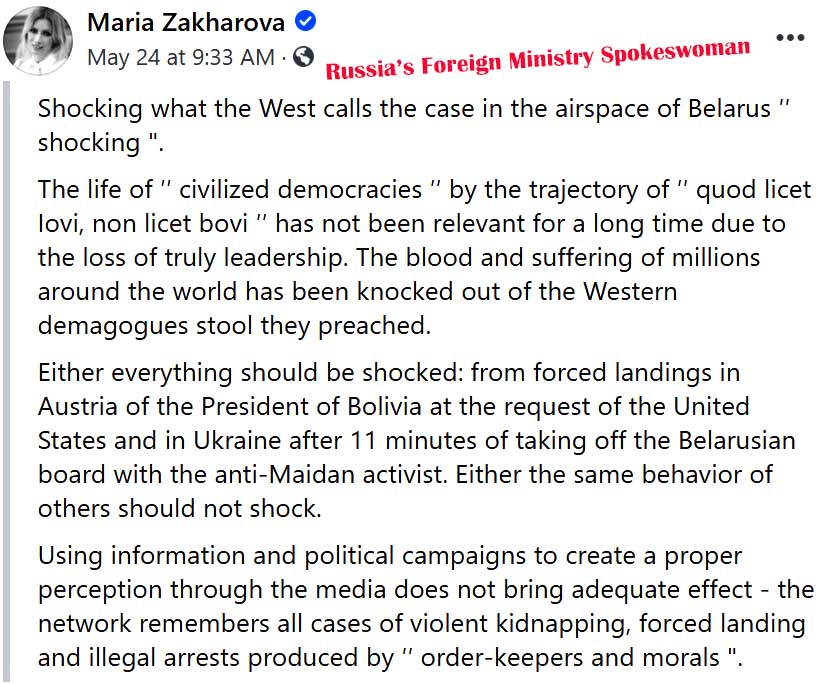 Ms Zhakarova’s third paragraph calls up an incident many will have forgotten. (It is often said the public has a dismally short memory. Maybe it does at that, but in their 24/7 manufacturing of opinion, corporate media work hard – for the most part systemically rather than through the conscious mendacity of individual journalists and editors – to guide us in what we do and what we do not forget.) Here is Thomas Knapp, writing yesterday in CounterPunch:

Why? Because while in Russia, Morales had indicated (in an interview with Russian state media) his willingness to offer asylum to American whistleblower Edward Snowden.

The US government, in the words of Jen Psaki (currently White House Press Secretary, but back then a State Department spokesperson) had  “been in contact with a range of countries across the world who had any chance of having Mr. Snowden land or even transit through their countries.”

Austrian authorities claim they searched the plane for Snowden. Bolivian authorities say that Morales refused to allow a search. But either way there’s little doubt that several EU regimes, at the request (implicit or explicit) of the US regime, colluded to force a plane — and not just any old regular plane, but a diplomatically protected plane — to land in an effort to help abduct a political refugee.

Evo Morales was more recently the victim of coordinated vilification in a now familiar alliance of deep state agendas with the useful idiocy of ‘progressive’ politics. In its theme of sex crime politicised – and more specifically of police pressure on women to testify against those whom the Empire wishes to neutralise – the Bolivian leader’s treatment echoes Sweden’s fabricated proceedings against Julian Assange.4

The latter never got as far as charges and, as we should all know by now, were ditched once their true purpose5 had been served.

If I had written that there was no reason to believe Assange would face extradition if he left the Ecuadorian Embassy, and that claim had proved horrifyingly wrong, I would do what any normal person would and shut the entire fuck up about Julian Assange for the rest of my life.

But back to Evo Morales, of whom Wiki tells us (my version is slightly abridged) that:

On 7 August 2020, photographs of Morales with a supposed minor began circulating on social networks. Bolivian authorities said [he] had been in a relationship with the minor since the age of 14 … In 2018, Bolivian feminist and journalist, María Galindo, criticised the then president, saying “[He] confesses that he uses his public acts to sexually hook the minors who attend those acts …”

The Ministry of Government subsequently informed Spanish newspaper Okdiario that it had opened a statutory rape investigation to determine whether a romantic and sexual relationship existed between the young woman and Morales while he was president … On 19 August 2020, the Bolivian Prosecutor’s Office began a formal investigation.

The woman was identified as 19-year-old Noemí Meneses when a statement to police was leaked. It said she had been in a romantic relationship with Morales since May 2020. Bolivian police placed her under house arrest, from which she escaped and fled to Argentina with her parents. There she wrote to the Bolivian Ombudsman saying the police had kept her from eating for two days and threatened to prosecute her for sedition and terrorism unless she said she had been in a relationship with Morales. She wrote that the police “forced [her] to testify under pressure, without a lawyer”.

Ring any bells? Or are you one of the many who sleep blissfully on?

I shouldn’t talk like this, I know. It’s rude. And bad salesmanship. As for dredging up ancient history from 2013 when …

several EU regimes, at the request of the US regime, colluded to force a plane to land in an effort to help abduct a political refugee

… by way of response to what Lukashenka’s Belarus got up to on Sunday, well, that’s just plain whataboutery, innit? Speaking of which, here’s an exchange below a Guardian opinion piece today on the incident. I captured this screenshot around 13:30. 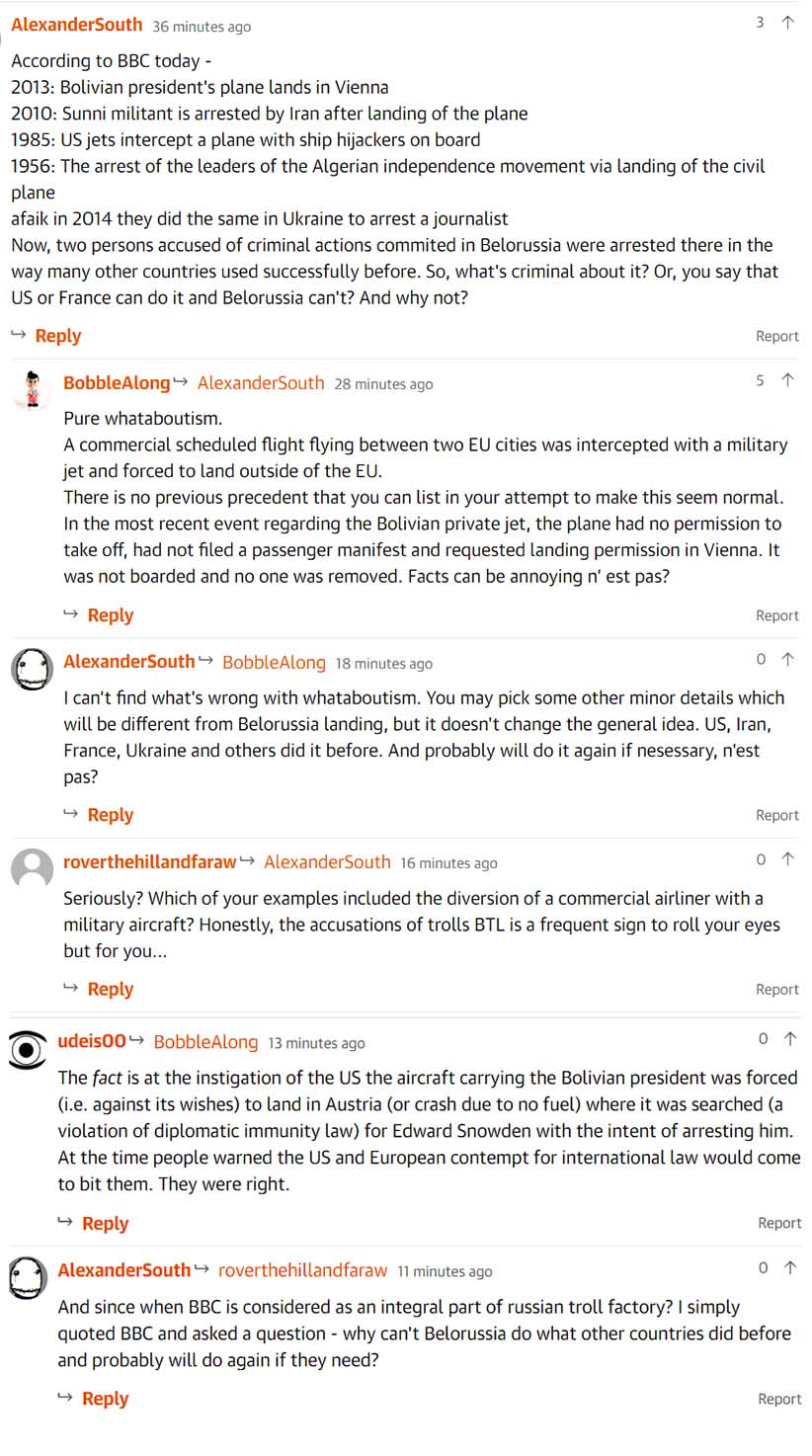 I’m with AlexanderSouth and udeis00 of course. On the specific question of whataboutery, I set out my view in August 2019 that it:

can show the hypocrisy of power, and that because of Situation A and Situation B, official accounts of Situation C are almost certainly bogus.

I’m also of the view that only a credulous fool could miss the wider agenda here, of a Russia once more caught in a damned-if-you-do/damned-if-you-don’t  trap framed in the spirit of that Pharisee invitation for the Nazarene to condemn Roman taxation. Or if you prefer – he being another bloke said to walk on water – of media demands, thirty-seven years ago, that Arthur Scargill one-sidedly condemn violence by miners fighting for their livelihoods.6

But there I go again: compounding whataboutery with irrefutable evidence of my true identity as a Putinbot! I’d best quit now, before the troll hunters track me down to ask what the weather is like in Moscow this afternoon.