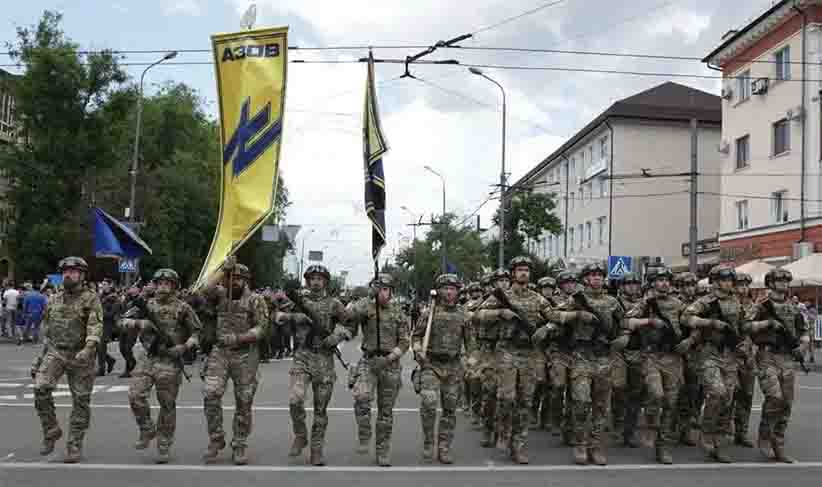 Five days ago on March 5, Substack’s Alexander Rubenstein and GrayZone’s Max Blumenthal revealed the most comprehensive evidence I’ve seen to date of a fact ‘our’ entire political and media establishment – and to their undying shame, swathes of both the social democratic and ‘revolutionary’ Left – have been at pains to deny and ridicule.

Ukraine is in the grip of openly declared Nazis.

Some of the ridiculers and deniers play up Zelensky’s Jewishness: in principle a facile argument in more ways than we need go into when incontestable facts on the ground show him to be a de facto hostage to Ukraine’s far right. Some – including Marxists who should know better – advance the strawman argument that all talk of a Nazi hold on Ukraine’s political and military establishments tars every Ukrainian with the same brush. It’s an argument so stupid – coming from folk I know are not stupid – that it’s hard not to divine bad faith.

But what are Rubenstein and Blumenthal – and more importantly the evidence they assemble – telling us?

Back in October 2019, as the war in eastern Ukraine dragged on, Ukrainian President Volodymyr Zelensky traveled to Zolote, a town situated firmly in the “gray zone” of Donbas, where over 14,000 had been killed, mostly on the pro-Russian side. There, the president encountered the hardened veterans of extreme right paramilitary units keeping up the fight against separatists just a few miles away.

Elected on a platform of de-escalation of hostilities with Russia, Zelensky was determined to enforce the so-called Steinmeier Formula conceived by then-German Foreign Minister Walter Steinmeier which called for elections in the Russian-speaking regions of Donetsk and Lugansk.

In a face-to-face confrontation with militants from the neo-Nazi Azov Battalion who had launched a campaign to sabotage the peace initiative called “No to Capitulation,” Zelensky encountered a wall of obstinacy.

With appeals for disengagement from the frontlines firmly rejected, Zelensky melted down on camera. “I’m the president of this country. I’m 41 years old. I’m not a loser. I came to you and told you: remove the weapons,” Zelensky implored the fighters.

Once video of the stormy confrontation spread across Ukrainian social media channels, Zelensky became the target of an angry backlash.

Andriy Biletsky, the proudly fascist Azov Battalion leader who once pledged to “lead the white races of the world in a final crusade…against Semite-led Untermenschen”, vowed to bring thousands of fighters to Zolote if Zelensky pressed any further. Meanwhile, a parliamentarian from the party of former Ukrainian President Petro Poroshenko openly fantasized about Zelensky being blown to bits by a militant’s grenade.

Though Zelensky achieved a minor disengagement, the neo-Nazi paramilitaries escalated their “No Capitulation” campaign. And within months, fighting began to heat up again in Zolote, sparking a new cycle of violations of the Minsk Agreement.

By this point, Azov had been formally incorporated into the Ukrainian military and its street vigilante wing, known as the National Corps, was deployed across the country under the watch of the Ukrainian Interior Ministry, and alongside the National Police. In December 2021, Zelensky would be seen delivering a “Hero of Ukraine” award to a leader of the fascistic Right Sector in a ceremony in Ukraine’s parliament.

A full-scale conflict with Russia was approaching, and the distance between Zelensky and the extremist paramilitaries was closing fast.

This February 24, when Russian President Vladimir Putin sent troops into Ukrainian territory on a stated mission to “demilitarize and denazify” the country, US media embarked on a mission of its own: to deny the power of neo-Nazi paramilitaries over the country’s military and political sphere. As the US government-funded National Public Radio insisted, “Putin’s language [about denazification] is offensive and factually wrong.”

In its bid to deflect from the influence of Nazism in contemporary Ukraine, US media has found its most effective PR tool in the figure of Zelensky, a former TV star and comedian from a Jewish background. It is a role the actor-turned-politician has eagerly assumed.

But as we will see, Zelensky has not only ceded ground to the neo-Nazis in his midst, he has entrusted them with a front line role in his country’s war against pro-Russian and Russian forces …

Continue reading on the GrayZone site …

2 Replies to “Yes, Ukraine is in the grip of Nazis!”