Our not so independent media, their limitedly dissident outriders included, chant in unison that the conflict in Ukraine – bringing us closer to Armageddon than at any point since the USA lost its thermonuclear monopoly – is “Putin’s war”. But when did it start?

In 2014, with a CIA backed coup – a textbook ‘colour revolution‘ – against the Russia-leaning (and corrupt) Viktor Yanukovitch to install the Washington leaning (and even more corrupt) Petro Poroshenko and unleash far right, rabidly Russophobic forces in a nation 17.3% ethnic Russian, to start a civil war now in its ninth year?

Or in 2019, when Volodomyr Zelensky was elected on a ticket of rapprochement with Moscow and – not least by expediting Minsk – Ukraine’s ethnic Russians; only to be threatened with lynching should he proceed. (The comedian turned president did a u-turn and is now hailed by the clueless as a hero.)

Or do we go back to 1990, to promises repeatedly given to Moscow that, in return for accepting German reunification, NATO would advance “not one inch eastwards?

Or should we steer clear of such “he said/she saids”, and use common sense instead?

Or wake up to the truth, hiding right out in the open, that on any number of reckonings the most aggressive power on earth is the US empire; that this empire’s dollar rule is facing its own largely self-inflicted demise, so nothing it says about economic rivals as powerful as Russia (or China) can be taken at face value?

(Likewise Western media, their systemic inability to go against ruling class interests – however daring they may be on matters less empire-critical – explained here.)

A good and righteous war wouldn’t need such cartoonish PR

Star Wars megastar Mark Hamill was recently named an ambassador for United24, the fundraising platform of the Ukrainian government, where according to The Times his attention will center on “the procurement, repair and replacement of drones as well as pilot training.”

“In this long and unequal fight, Ukraine needs continuous additional support. That’s why I was honoured President Zelensky asked me to become an ambassador for the Army of Drones,” Hamill, who played Luke Skywalker, said in a statement. “I know for certain that Ukrainians need drones to protect their land, their freedom and the values of the entire democratic world. Right now is the best time for everyone to come together and help Ukraine stand up in this war with the evil empire.”

In a statement thanking Hamill for his support, Zelensky said: “The light will win over darkness. I believe in this, our people believe in this. Thank you for taking on this difficult mission of being the first ambassador to help Ukraine raise funds for the Army of Drones to support our defenders. It is really important!”

Hamill, 71, is among an expanding list of celebrities who have lent their support to United24, which Zelensky launched in May. The website is reported to have raised nearly $188 million in donations, including a recent $5 million contribution from the Pfizer Foundation to support Ukraine’s medical needs.

Last week Barbra Streisand announced that she would also serve as an ambassador, hailing the “capability and courage” of the Ukrainian people as an “inspiration for all those worldwide who promote democracy and fight authoritarianism”. 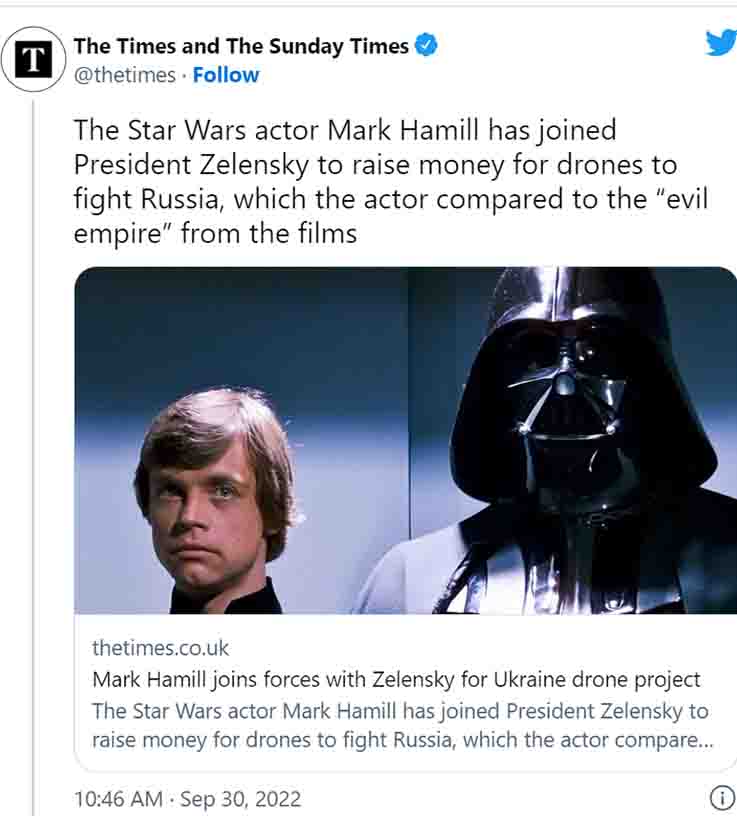 So for the record if you were under the impression that this proxy war could not possibly get any more Disneyfied, you were wrong.

Hamill celebrated his new position by tweeting a graphic showing a Star Wars spaceship wearing the Ukrainian flag colors, which the actor captioned in Polish because Hollywood is brain poison.

Other recent Twitter PR shenanigans for this proxy war includes the Ukrainian government account talking to its “Crimea” account in the cringiest imitation of viral brand tweets you could possibly imagine.

“@Ukraine getting unchained, on my way home,” the Ukrainian government’s “Crimea” account replied.

Both of these accounts would of course be run by the same person, who would have been hired specifically for their understanding of social media, internet memes, and marketing. Because this is the most phony, PR-intensive proxy war of all time.

The face of this war is after all Volodymyr Zelensky, a well-known Ukrainian actor, who has been drumming up western support for this war by modeling on Vogue, making video appearances for the Grammy Awards, the Cannes Film Festival, the Venice Film Festival, the New York Stock Exchange, the World Economic Forum and probably the Bilderberg group as well, and having meetings with celebrities like Ben Stiller, Sean Penn, and Bono and the Edge from U2.

Western media have blanketed the airwaves with biased coverage like nothing ever seen before. Russian media are purged from the airwaves. Censorship of dissident voices has drastically escalated online with regard to this war. Social media algorithms artificially boost corrupt propaganda outlets which aggressively push the imperial line. Anti-Russia trolling operations are loudly praised and amplified by corporate media, government agencies, warmongering think tanks funded by western governments and the war industry, and branches of the US military explicitly dedicated to cyberspace operations, despite all we know about the US and UK militaries secretly using trolling operations online.

This is a proxy war that simply could not happen if it wasn’t backed to the hilt by the most powerful government on earth. And before anyone objects, yes, this is indisputably a proxy war. If it isn’t a proxy war when you’re sending billions of dollars of weapons to be used by CIA-trained fighters aided by US military intelligence and US special forces and CIA operatives on the ground, then there has never been a proxy war. That’s why US officials and the mass media have been openly calling it a proxy war.

None of this would be happening if this proxy war was as just and righteous as its proponents are pretending. If your proxy war demands nonstop perception management at maximum aggression to manufacture public consent for it, your proxy war is probably immoral and bad. If maintaining public support for a proxy war requires nonstop PR spin, aggressive propaganda from the mainstream news media, banning of Russian media, and giant troll information ops amplified by think tanks and government agencies, it probably shouldn’t have public support.

If you need to aggressively psychologically manipulate a population to get them to support your agenda, censor their speech, and disrupt their online discourse with astroturf trolling ops, it’s because you know your agenda is not something they’d choose to support on their own. If you need to manipulate people into supporting something, it’s because it’s not worthy of their support, and you know it.

If people really understood how much is being risked in escalating this proxy war, and at what extraordinary cost, and to no benefit to the common citizen, Washington would be a steaming pile of rubble right now. Nothing could protect our rulers from the rage of the citizenry if they really understood that their bank accounts are being plundered and their lives risked solely to advance the geostrategic goals of a few corrupt imperialists.

They work to manufacture our consent because they know we wouldn’t give it to them of our own volition. It’s about as despicable a subversion of democracy as you could possibly come up with.