US Officials Troll About World Press Freedoms While Assaulting Them

I will never get used to living in a world where our rulers will openly imprison a journalist for telling the truth and then self-righteously pontificate about the need to stop authoritarian regimes from persecuting journalists.

Just today US State Department spokesman and CIA veteran Ned Price tweeted disapprovingly about the Kyrgyz Republic’s decision to deport investigative journalist Bolot Temirov to Russia, where press freedom groups are concerned that the Russian citizen could face conscription to fight in Ukraine.

“Dismayed by the decision to deport journalist Bolot Temirov from the Kyrgyz Republic,” said Price. “Journalists should never be punished for doing their job. The Kyrgyz Republic has been known for its vibrant civil society — attempts to stifle freedom of expression stain that reputation.”

This would be an entirely reasonable statement for anyone else to make. If you said it or I said it, it would be completely legitimate. But when Ned says it, it is illegitimate. 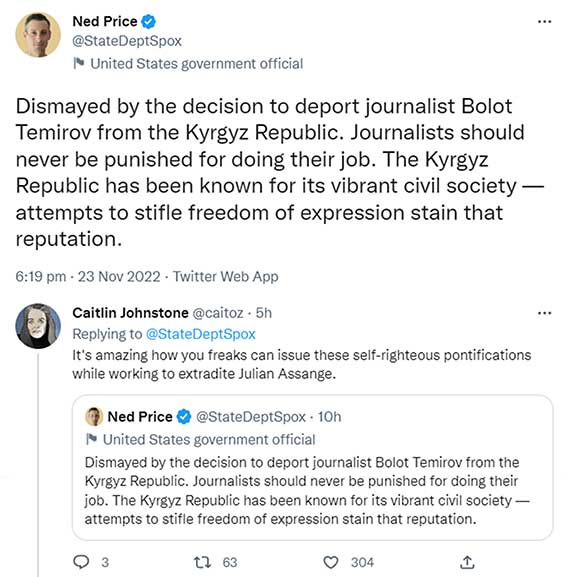 This is after all the same government that is working to extradite an Australian journalist from the United Kingdom with the goal of imprisoning him for up to 175 years for exposing US war crimes. Price says “Journalists should never be punished for doing their job,” but that is precisely what the government he represents is doing to Julian Assange, who has already spent three and a half years in Belmarsh Prison awaiting US extradition shenanigans. This is in top of the seven years he spent fighting extradition from the Ecuadorian embassy in London under what a UN panel ruled was arbitrary detention.

A UN special rapporteur on torture determined that Assange has been subjected to psychological torture by the allied governments which have conspired to imprison him. Scores of doctors have determined that his persecution is resulting in dangerous medical neglect. Yet he is being pulled toward the notoriously draconian prison systems of the most powerful government in the world, where he will face a rigged trial where a defense of publishing in the public interest will not be permitted.

All to establish a legal precedent that will allow the most powerful empire that has ever existed to extradite journalists from anywhere in the world for exposing inconvenient truths about it. But sure, Ned, “Journalists should never be punished for doing their job.” 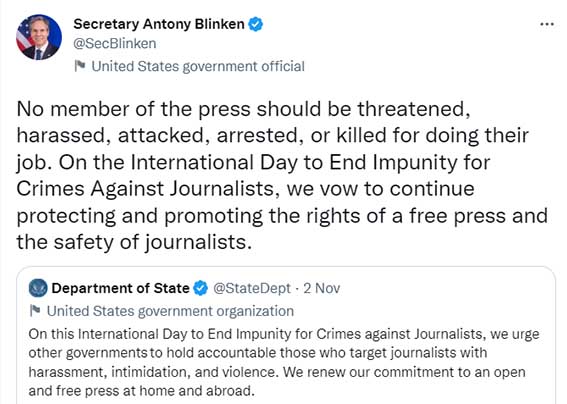 Earlier this month US secretary of state Antony Blinken 1 posted a tweet of his own commemorating the International Day to End Impunity for Crimes against Journalists, without the slightest trace of self-awareness.

“No member of the press should be threatened, harassed, attacked, arrested, or killed for doing their job,” Blinken said. “On the International Day to End Impunity for Crimes Against Journalists, we vow to continue protecting and promoting the rights of a free press and the safety of journalists.”

“No member of the press should be threatened, harassed, attacked, arrested, or killed for doing their job.”

We are ruled by tyrannical, hypocritical freaks who do not care about truth and freedom; they care only about power and what they can use to obtain it. The only press they support are those whose persecution can be politically leveraged, and those who can be used to peddle propaganda like the notorious AP editor 2 who recently said she “can’t imagine” a US intelligence official being wrong.

Pointing out hypocrisy is important not because hypocrisy is an especially terrible thing in and of itself, but because it draws attention to the fact that the hypocrite does not really stand where they claim to stand and value what they purport to value. The rulers of the western empire care about press freedoms only exactly insofar as they can use them to concern troll foreign governments they don’t like to advance their global power agendas. And not one molecule further.