Another post dedicated to bad thinking, it being a year and a day since my last one. Yesterday’s Independent ran this piece. Having approved in ways active and passive Obama’s bombing the middle east every day for eight years, promoted right-wing coups in Ukraine and Honduras and locked up more whistle-blowers than any previous administration, the Independent now looks askance at Trump’s latest slice of the nastiness he goes in for. What did he say this time? That alongside other methods not spelled out, he wants waterboarding, outlawed in 2015, back in the toolbox.

On some topics, like Syria, below-the-line comments can be of higher merit than the flyweight above-the-line pieces they’re responding to. This wasn’t one of those days. With a few worthy exceptions, commentariat thinking was equally confused. Comment after comment assured us, on God knows what evidential basis, that contrary to what Trump believes, torture never works. (Mark that ‘never’.)  In this they were as one with the piece’s author, who’d told us:

There is no credible scientific evidence to suggest torture works in extracting reliable information from a victim. A book on the issue by Trinity College Dublin’s professor of experimental brain research, Shane O’Mara, found that – morality aside – “proponents of torture are left with an indefensible case”.

Yes, I realise I’ll have the Apostrophe Soc on my back for my own penultimate paragraph. But the thread as a whole offered clues that most commentators weren’t seeing straight, and for the oldest reason of all: wishful thinking. Another clue is related but distinct. The few who challenged the view that torture never works invariably made clear their abhorrence of it. That, however, did not stop them being answered in ways that took them to be advocating its use.

There’s a whole branch of interpersonal psychology known as ‘attribution theory’. One of its concerns is the way we process messages. It posits a margin of tolerance, a kind of no man’s land at the borders of our core opinions and beliefs. When an incoming message lands within these borderlands, we distort it to exaggerate its fit with – and so pull it toward – those core beliefs. Conversely, when an incoming message lands outside the borders, we distort it in ways that push it even further away.

Here’s an example from the same very large set of comments. I stress the ‘very large’ because other pieces in the same issue – on Theresa May’s intent to urge the Donald not to be ‘soft’ on Iran and not to be ‘soft’ on Russia; i.e. keep the very lucrative hate industry on the front burner – drew far fewer comments. But I digress. This exchange exemplifies what those attribution psychologists are on about: 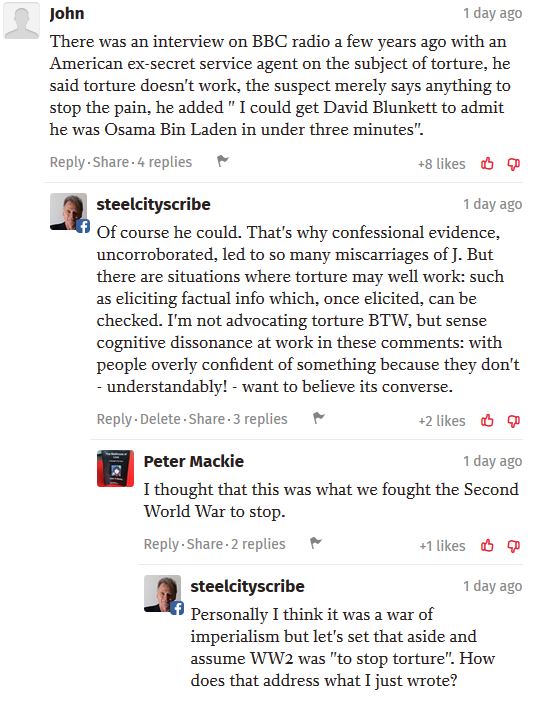