How rude of me! I haven’t yet shown the view from my window. Here it is: 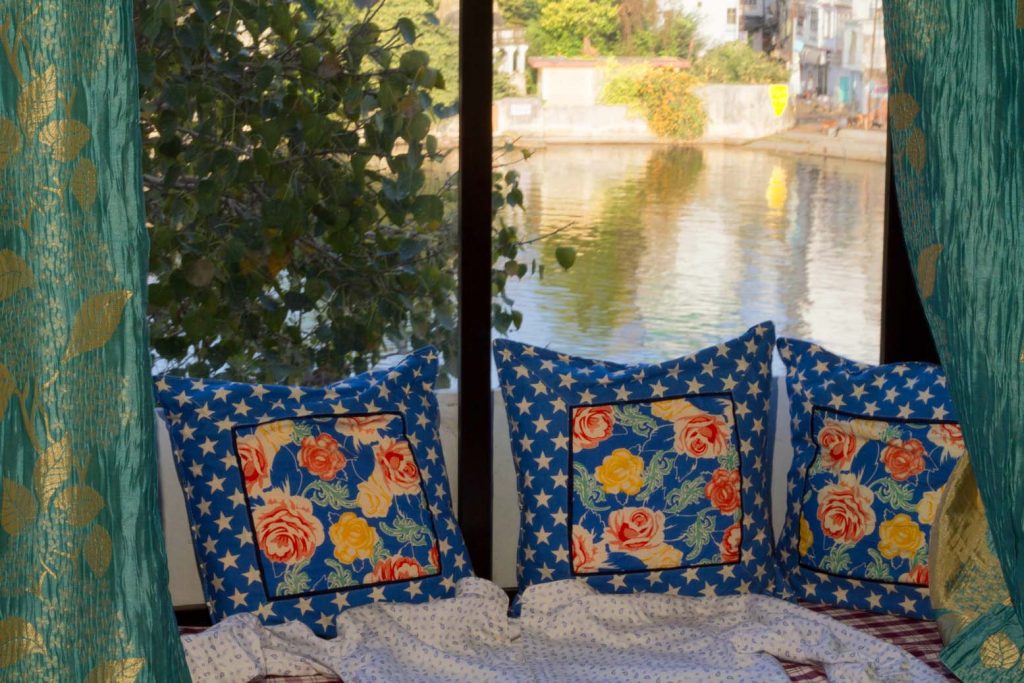 After coffee and fruit I took myself down to a park, south of town and near the lake. First thing I happened upon was a cricket game. Yet again I found my kit opening social doors. Especially when I got one of the waiting batsmen to act as a VAL (Voice Activated Light-stand), positioning him at silly mid-on (aka  silly twat) with my off-camera flash held up high and pointing down on batsman or bowler. A radio trigger on my camera hot-shoe allows me to stand twenty metres away to bag the shot. As if by magic.

And the pictures, emailed and FB-ed as requested, have been well received by the players. 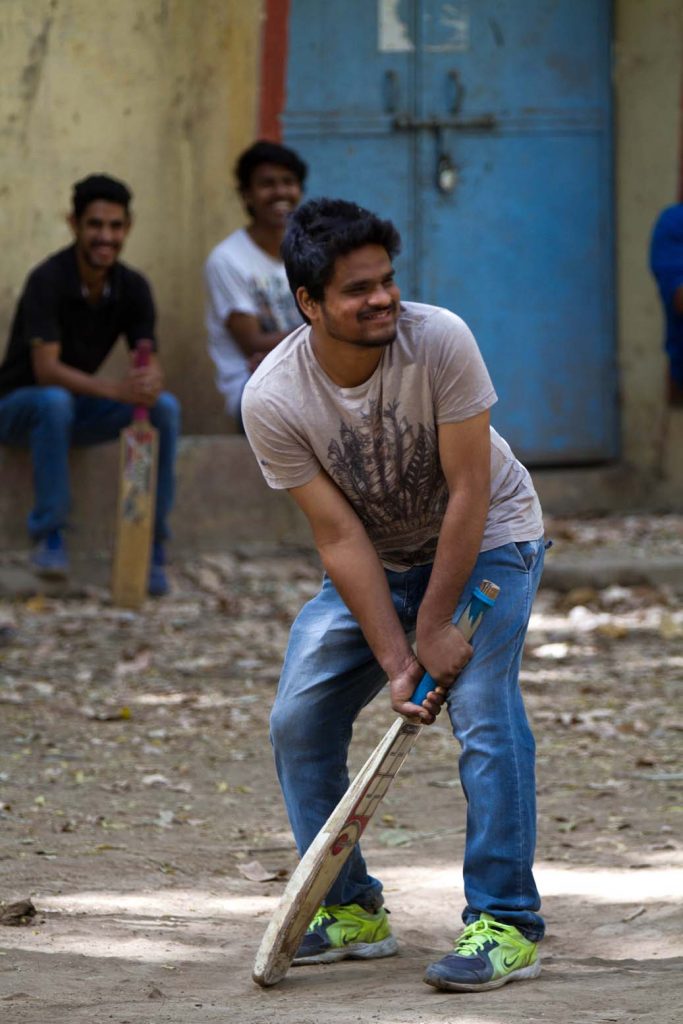 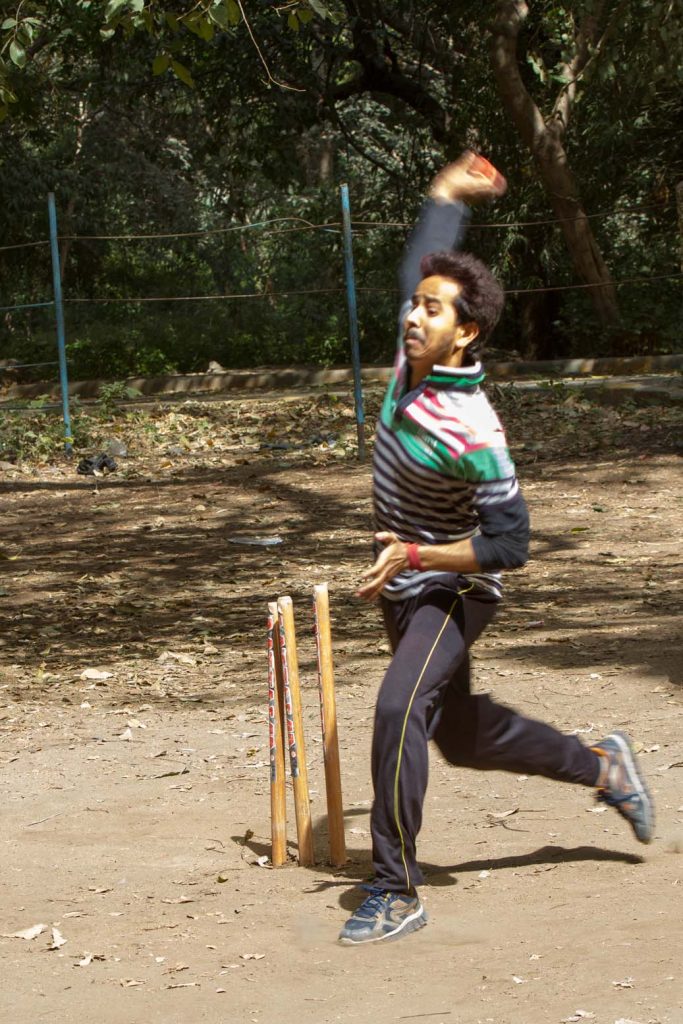 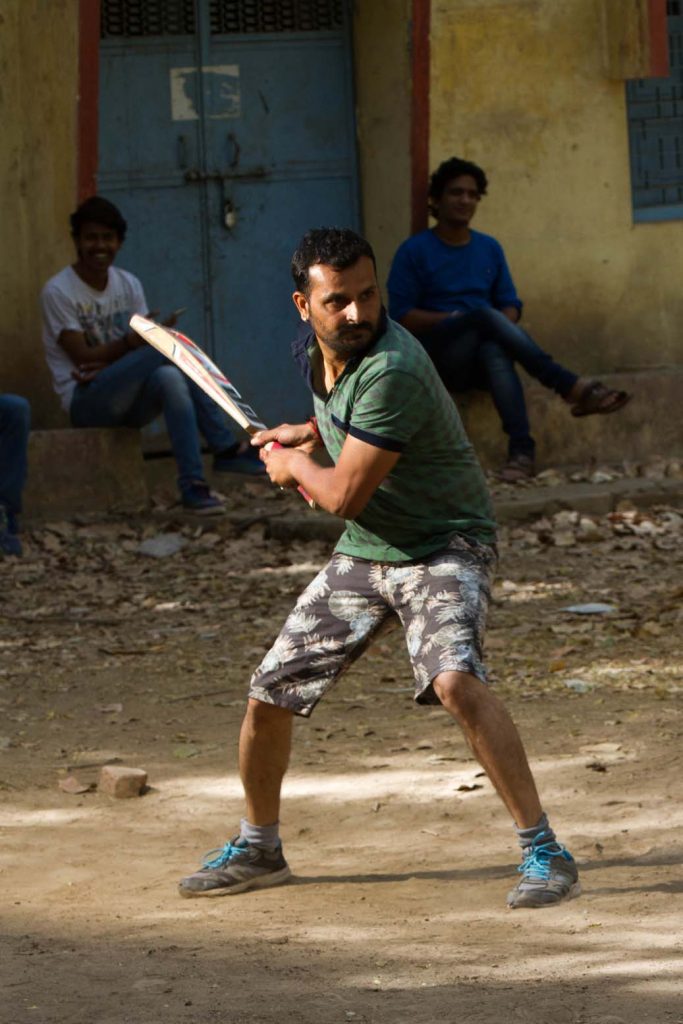 Then it was to a marshy pond for some wild life shots. Hardly my forte, but in a place like this even a tyro can get lucky. First the egret; such an elegant bird. 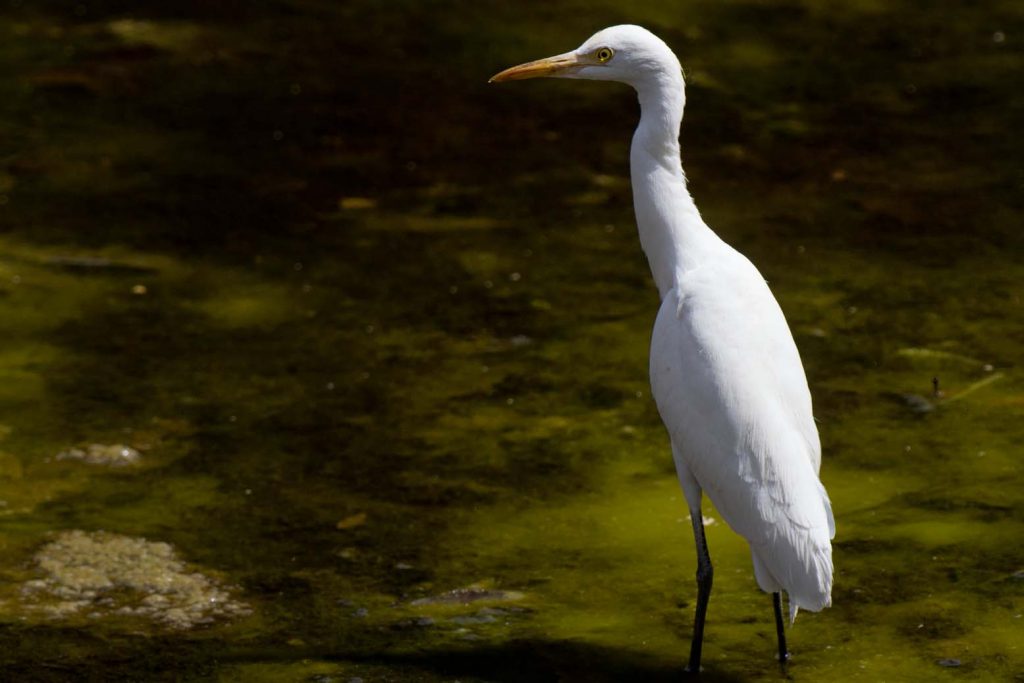 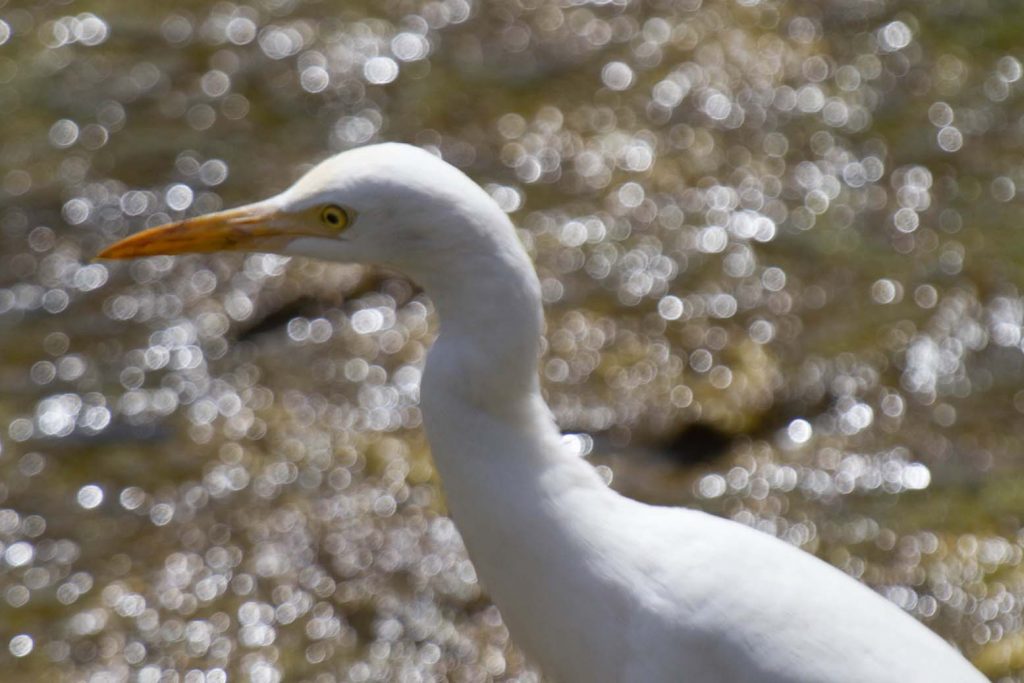 As Jack Nicholson so memorably said to Cher in Witches of Eastwick, I wouldn’t know an egret if I was pissing on it, but – birders correct me if I’m wrong – the proximity of this next guy to the white adults tells me s/he me be a juvenile egret. 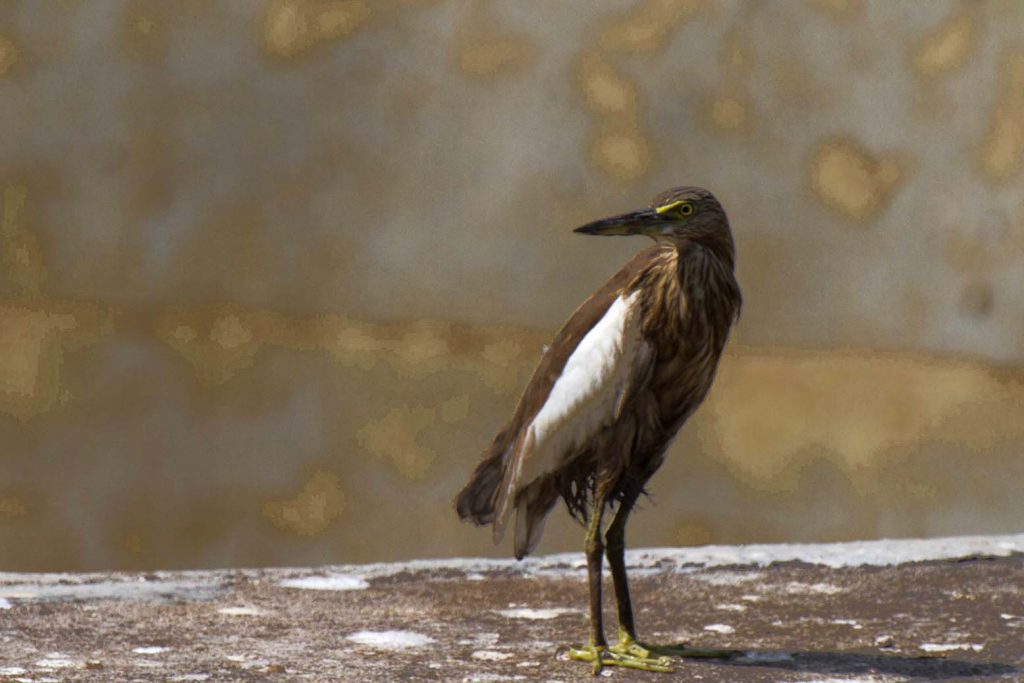 I knew there was a decent chance of snapping a serpent in such a place, but was expecting it to be in the water, this late in the day. Then I looked down to a concrete apron at edge of pond. 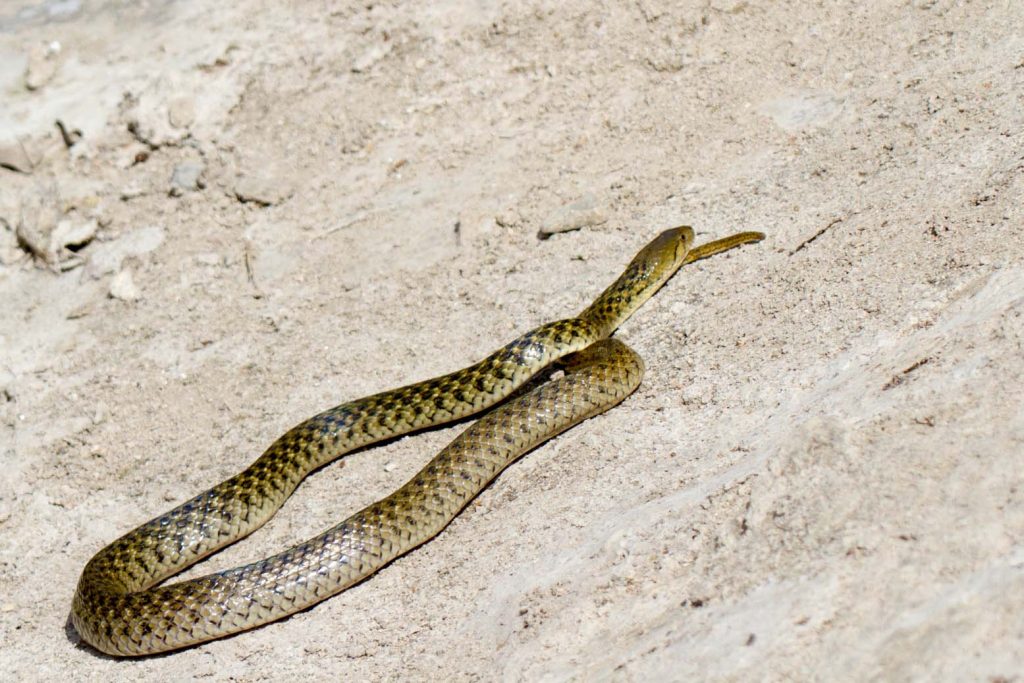 Note the absence of taper in the neck. I tried to get round him for a head-shot but he – I’m using male universal pronoun, sisters – was having none of it. In such a place even a snake of one and a half metre length is vulnerable. Especially from the air, where eagles ride the thermals and are well capable of a spot of herpetological despatch and devour. (The locals call them eagles, that is, though to my eye they look like the red kites of Aberystwyth and surrounds.)

In short, and back to the snake, something alerted him – and no, it was not the click of my shutter; of this we can be sure – and he slid gracefully into the murky depths. As it happened I’d get a second chance, but I wasn’t to know that. Frankly I was a tad put out by his rudeness, though a pair of squirrels soon cheered me up. 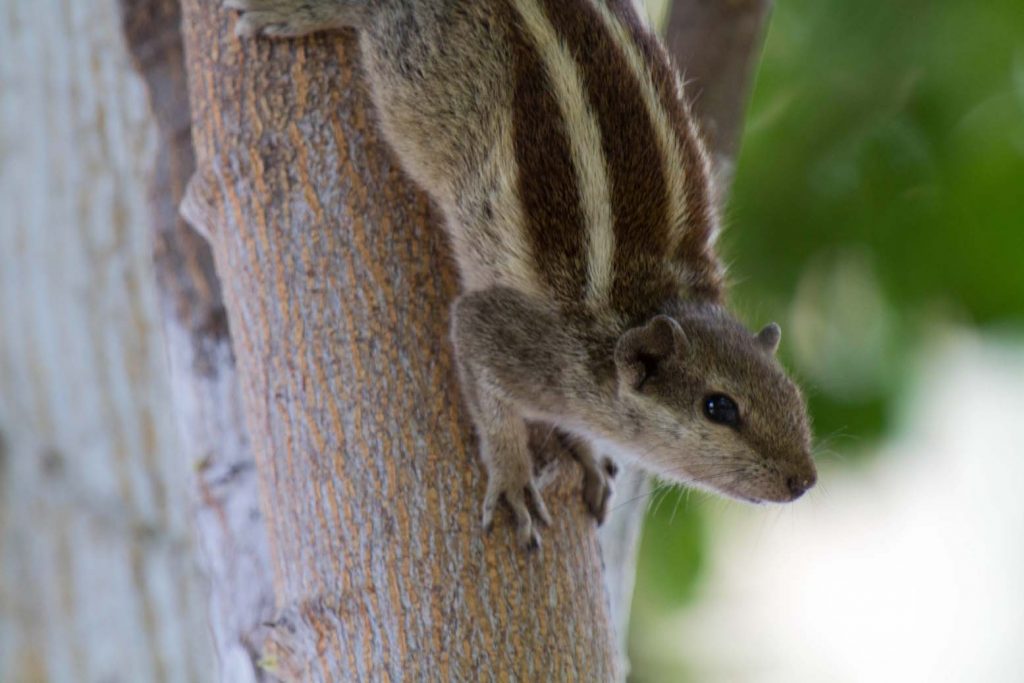 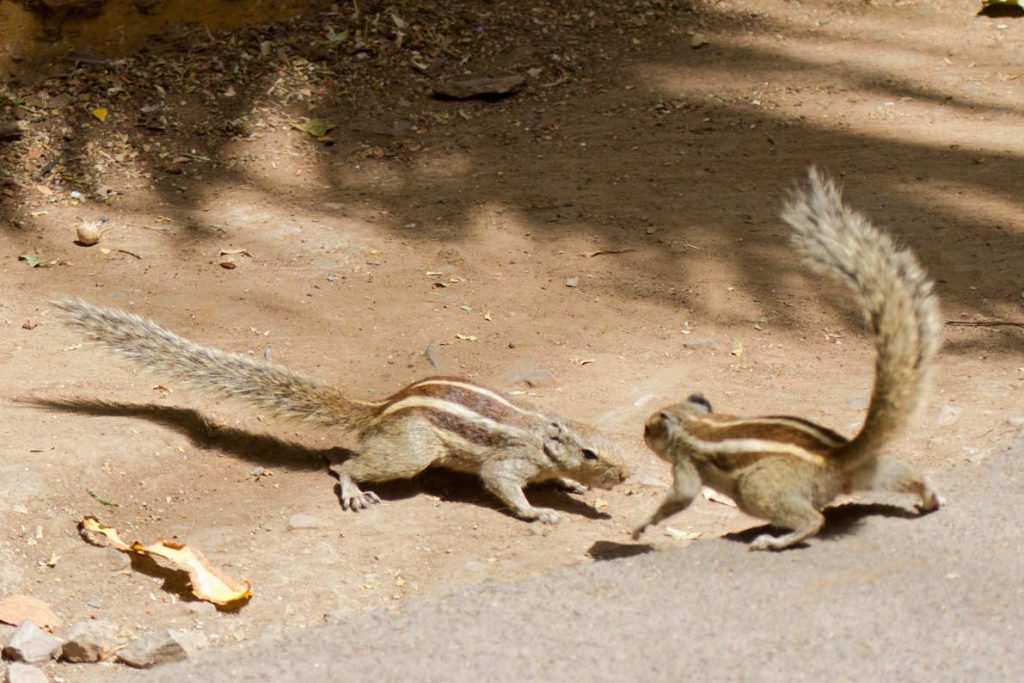 As did the grey langurs, who never fail to come through for me. Gentler of temperament than the red faced monkeys, their facial expressions blow me away every time. I’m not the only one. A few evenings ago I saw an elderly woman feeding them bananas. Each in turn approached on two legs, hand held out like a child for sweets. I love watching them peel and eat the fruit but this afternoon, yes, I had no bananas. 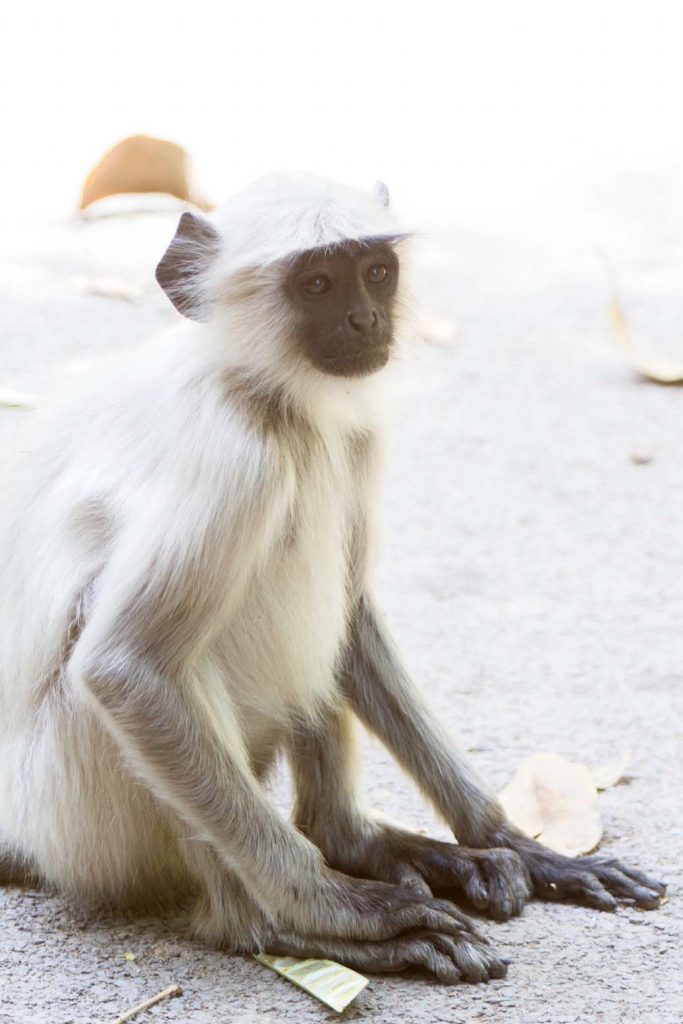 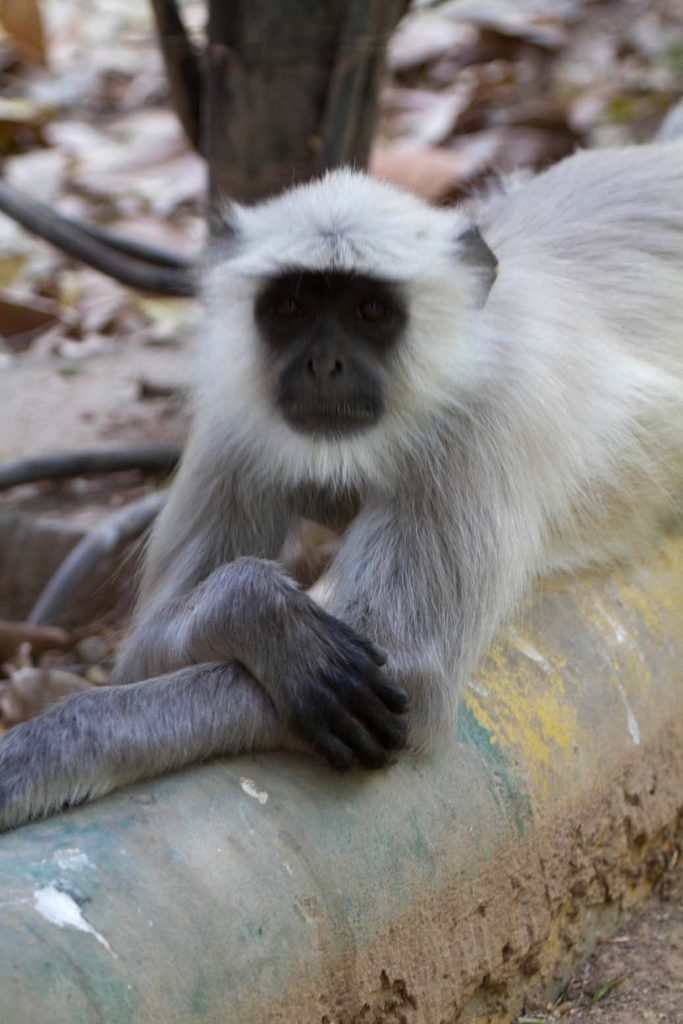 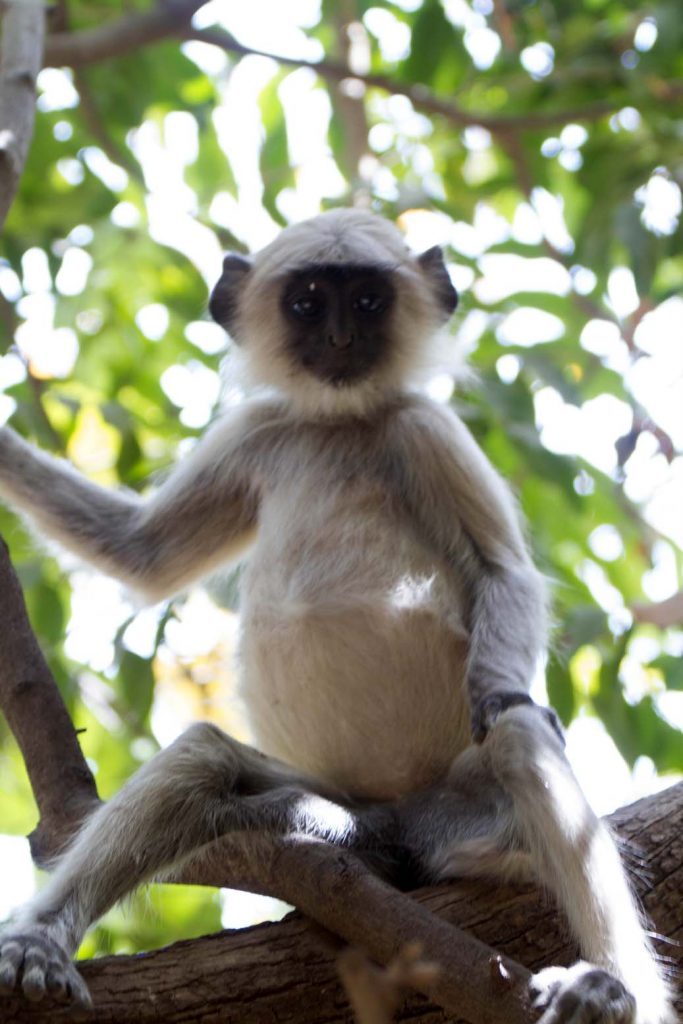 Remember what I said about my ostentatious kit opening doors? An Indian family, spotting my bazooka lens, excitedly called me over to a patch of woodland bordering the path. On the far side lay dense undergrowth leading to a swamp. It took me a few seconds, but I finally got with the plot. 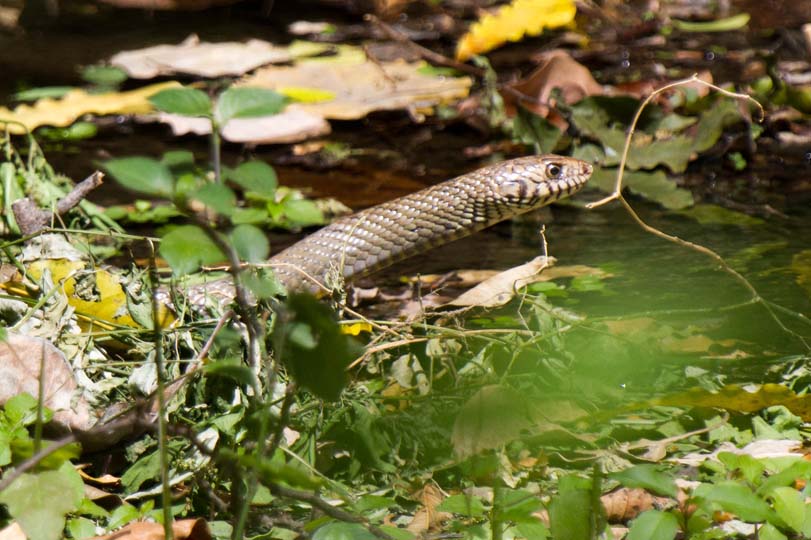 It’s hard to be sure without that classic inflation of rib cage – a defensive display analogous to the way threatened cats or dogs ruff up their fur to give off the old don’t-fuck-with-me  vibe – but I think this is a cobra, unaware it’s been spotted. Not only is it one of India’s most common snakes but the patterning and colour, and absence of taper in the neck, are tell tale indicators. 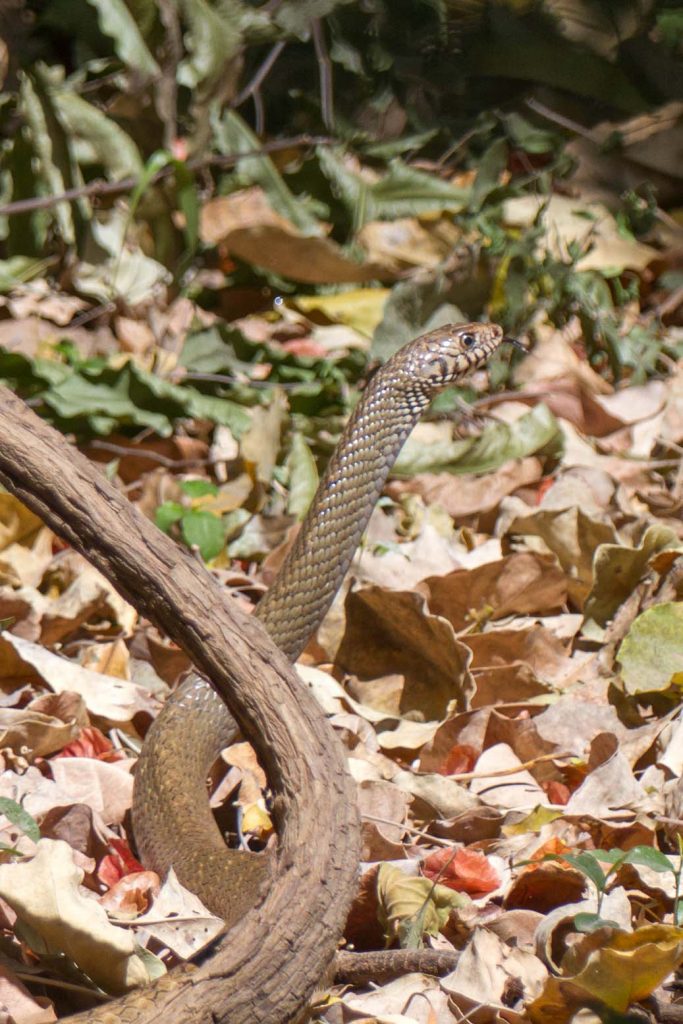 And I’m proud to say I did get the full frontal – albeit a tad out of focus. 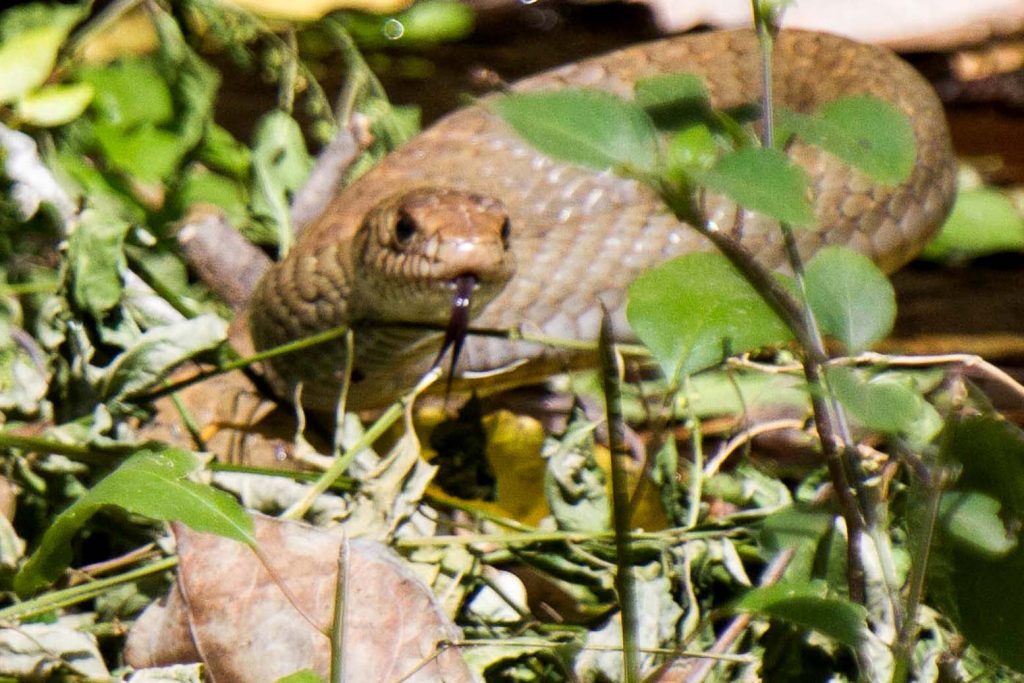 It would be remiss of me not to take the opportunity to point out yet another aspect of the world’s unfairness. 50,000 Indians die each year of snakebite, with hundreds of thousands maimed. In Australia, hosting ten of the world’s fourteen most venomous snakes (plus salties, great whites and funnelback spiders – and that’s before we even get to the people) there’s about one death per decade to snakebite. Go figure.

So what’s the big deal about a mutt? Simple: the dogs that roam the streets of Udaipur (and Delhi, Addis Ababa and Guatemala City) are wild animals. Highly attuned to homo sapiens sapiens, they were coexisting with us long before we took up farming but that affinity does not of itself make them domesticated. They’re nobody’s pets and neither are they strays. 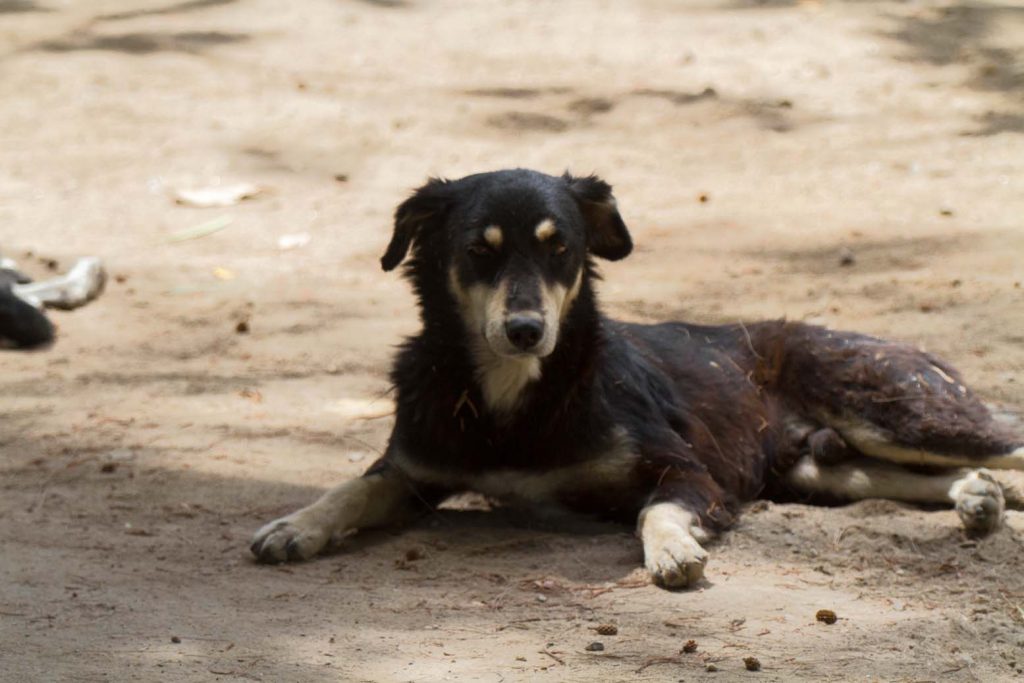 A few klicks out of Udaipur an American family runs a charity for sick animals. Dogs are well represented on the patient roster: dogs with three legs … dogs doused in tar ‘for fun’ .. dogs with cancer – for which chemo and radio therapy are given.

Why, asks one of the website’s FAQs, do we put them back on the streets after treatment? Because, it answers, it’s the humane thing to do. These are wild animals which happen to get along well with humans. Highly socially intelligent, dogs seldom rock the boat and if one did it would likely be expelled by the community as endangering the homo-canine esprit cordiale.

The dogs are released ‘back in the wild’ because that’s where their brothers and sisters are.

6 Replies to “A Sunday stroll in the park”