For nigh on a year my extremely close friend and below-the-line commenter zerohoursuni has been on “pre-moderation” at the Guardian. That means all his comments are subject to delay before they appear, if they appear at all, below any opinion piece he sees fit to comment on.

He doesn’t know why he was singled out. Graun practise is to blanket refer its grey-listed to a set of rules, none controversial and none, he insists, contravened by him. He thinks his crime was to include, in an offending comment, on-topic links to articles on a steelcityscribblings site often critical of the Guardian. But criticising the Graun, oddly enough, does not feature on the Shalt-Nots page he was referred to for likely cause of his current location on the naughty stair.

Pre-moderation purgatory may mean simply a delay in comments appearing. Or it may mean they don’t appear at all, as with the comment zerohoursuni made yesterday, shown below, to what he and I agree is warmongering irrationality from the ever pompous Martin Kettle.

But first let’s hear other voices on the attacks on Syria, for crimes of which there’s zero evidence and subzero motive. My views on Guardian coverage of Syria are no secret but I’ve spoken less about its tendencies toward censorship. The two are closely related, however. In a recent piece on the position on Syria taken not just by liberal media but much of the far left, I wrote:

Anyone still of the view the Guardian is a benign organ offering genuine plurality of view might read Olivia Solon’s ‘forensic’ piece, referenced in an earlier post on this site. They might note its attacks on two journalists, Eva Bartlett and Vanessa Beeley – who unlike any of its own journalists, least of all San Francisco based technology writer Solon, report from inside Syria – and the fact Beeley and Bartlett requested but were denied right of reply. If that isn’t ‘no-platforming’, could someone explain what the term actually means?

It’s a bitter-sweet experience, given my decidedly marxist views, to hear hard-headed sense on Syria’s continuing ordeal – in our name, at our expense and at some risk of WW3 – spoken not by liberals or leftists but those on the right of the political spectrum.

Men like Peter Hitchens, icily logical against the fact-free wafflings of a liberal professor  …

… or (thanks, Mike, for the heads up) neocon Tucker Carlson at Fox News – does he still have a job there? – going deliciously offscript in his demand for plain logic …

Reporter goes rogue and destroys TV pundits calling for the invasion of Syria, live on air

Then there’s Britain’s former ambassador to Syria, Peter Ford. He’s no right winger, but nor is he on the left. I stand by my February description of him as a “liberal of the old school … a decent man who deserves a hearing”. Thanks to Jawed for alerting me to his responses on BBC Radio Scotland to Doumagate.

Oh – almost forgot. Here’s the spiked comment of zerohoursuni, placed for his own protection on premods. But wait! Look closely. It appears it was not his comment being spiked, but that of his sparring partner, the elegantly mnemonic ID6886597. Idi‘s view having somehow upset the Graun moderators – search me for why: I see in its deep structure only brainwashed drivel, and since when did they have any issue with that? – there was now no need for zhu‘s to appear.

I have to hand it to them, it raises censorship to an art form. Couldn’t make it up, could you? 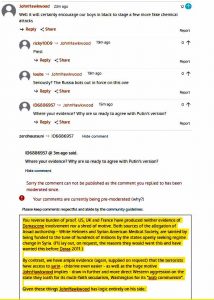