Had there been a scintilla of residual doubt on the matter, and there wasn’t, Andrew Rawnsley’s references in today’s Guardian Opinion to ‘Labour moderates’ would have erased it. That piece – Labour’s balance of terror has shifted. Now Corbynites have cause to be fearful – is a minor acid attack within the wider1 Antisemites-Under-The-Beds witch trials hosted in the name of progressive values, yet clearly aimed at removing Jeremy Corbyn2 and returning the party to what it pleases Mr Rawnsley to think of as sanity.

Labour ‘moderate’ Siobhain McDonagh on BBC Radio 4 today: to be anticapitalist is to be antisemitic

That sanity being, of course, support for wars of imperial aggression led by the USA … free pass to Israel to do as it damn well likes in Gaza, West Bank and Golan … lethal but lucrative arms sales to Saudi Arabia … making the 99% pay for casino capitalism under cover of austerity and employer flexibility – and much more in the same vein. As a recent below the line comment to an OffGuardian post put it 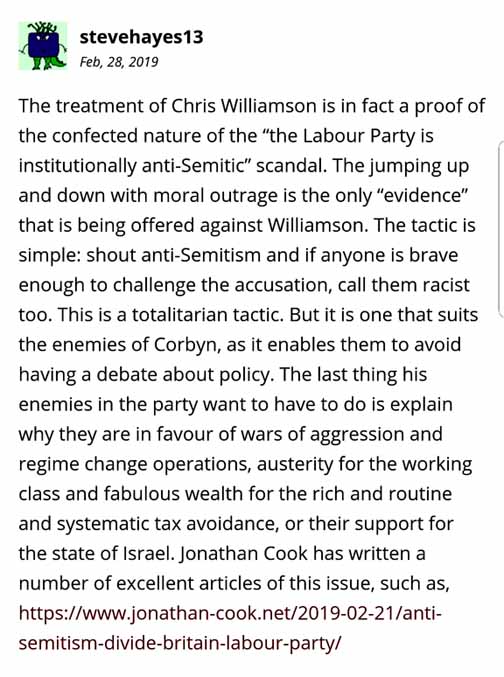 Indeed, it’s a measure of the moral insanity of mainstream media dialogue that a world of wars in the name of humanitarianism, of super-exploitation in the name of a ‘developing’ world, of broadening Western impoverishment in the name of sensible economics – and, now, of Salem standards of justice in the name of fighting racism – comes gift-wrapped as normality; its critics derided as having at best a weak grip on reality, at worst as being Enemies of Decent Values.

Tariq Ali nailed it with his term, the Extreme Centre. For the many pulled into its gravitational field the likes of Mr Corbyn, and for that matter of yours truly, are the ones who look ‘extreme’. Funny old world, innit?

But back to Rawnsley. In a piece of wishful thinking devoted to talking up “the resurgence of Tom Watson”, these words in particular caught my eye:

… we can also add the poison of antisemitism that has entered Labour’s bloodstream on his watch. The party did not have this problem under Ed Miliband, Gordon Brown or Tony Blair. Three very different kinds of Labour leader; none presided over a party hosting the most vile manifestations of antisemitism. The party has only been polluted with anti-Jewish racism since Mr Corbyn and his allies were given the keys to the Labour house and took responsibility for what kind of person is allowed to live there.

Three claims here.3 One is of the poison of antisemitism in the Labour Party. Another (implied) is that it is higher there than other forms of racism, higher than in the general public and higher than in the Tory or Lib Dem Parties. The third being that antisemitism has soared (presumably, for the claim to escape tautology, faster than the membership has) under Corbyn’s leadership.

Naturally, so heavyweight and respected a pundit as Rawnsley will have supplied a plethora of evidence in support of these claims. It’s just that I can’t for the life of me see where he hid it.

Postscript, March 5. Yesterday, one day after I posted the above, the Guardian ran a similarly lightweight piece on antisemitism within Labour, this one by Jon Harris. As with Rawnsley, that comment-is-free-but-facts-are-sacred paper chose not to open this piece – The unanswered question: why do antisemites think Labour is the party for them? – for comment. But Harris, unlike Rawnsley, writes occasionally from a leftish perspective. Not yesterday though.

The same day, Jonathan Cook penned a response to Harris far more detailed than my own to Rawnsley. Posing the question – why has a man known for well informed writings abandoned all pretence of factuality here? – Cook writes:

It is easy – and lazy – to accuse those who peddle these distortions of acting solely in bad faith. But speaking as someone who was himself once deeply immersed as a journalist in the corporate culture of the Guardian, I know how simple it is from within that culture to fail to scrutinise one’s most fundamental and cherished assumptions. In fact, it’s often a requirement for remaining employed.

Well said. I also find myself arguing on two fronts. One is with those who see corporate media – especially ‘liberal’ brands like the Guardian – as flawed but nonetheless committed to honest journalism. It isn’t. It really, really isn’t; not in things that truly matter to our ruling class.

The other is with those who’ve correctly recognised the extent of the mendacity of such media, but drawn the conclusion, IMO incorrect, that most journalists are liars, a conclusion often aired in colourful and at times misogynistic terms, with ‘presstitutes’ and ‘whores’ among the clichés of choice.

Cook’s piece is well worth reading in light of both disputes. For further reading on systemic bias arising from the political economy of ‘our’ media, I suggest Herman and Chomsky’s now classic, Manufacturing Consent: The Political Economy of the Mass Media.