Late evening at the Seven Olives. Mesfin and I eat chickpea stew with Ethiopia’s ubiquitous injera. Mesfin – below, with Daniel and my tripod on his right – casts a baleful eye over a table on the far side of his hotel’s terraced restaurant. A large group of African Americans, middle class and middle aged, drink South African sauvignon and photograph one another badly. 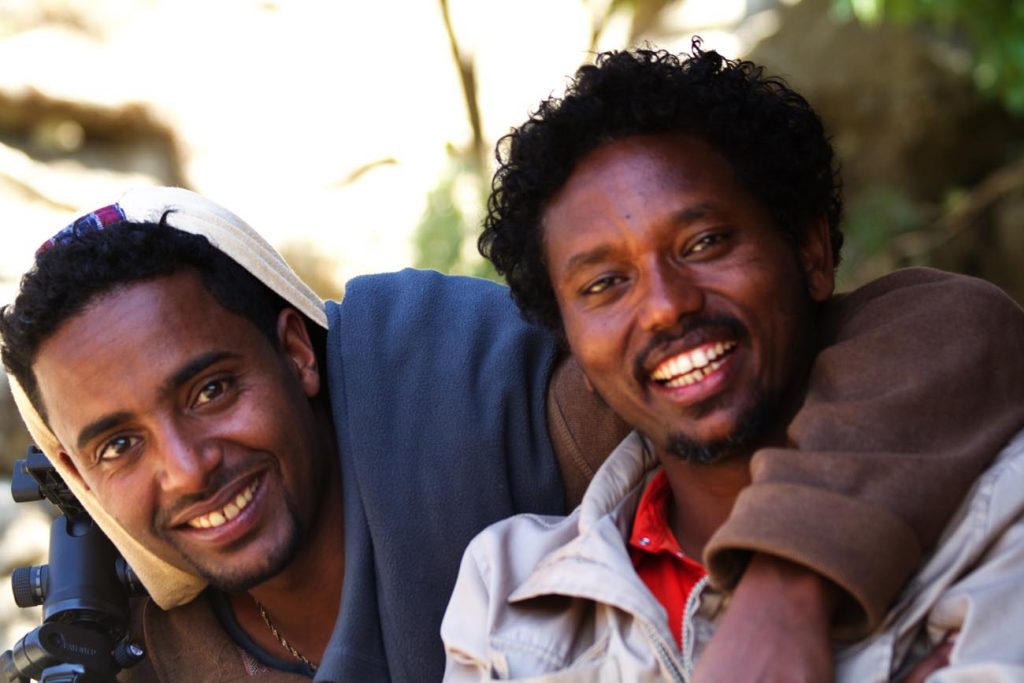 He turns back to me.

“Black Americans always give us a hard time. So quick to take offence, to see imaginary preferential treatment to white people.”

I wouldn’t know – but had watched with displeasure as, twenty minutes earlier, one of their party gave gentle Eeyajio a roasting for taking longer than she’d thought necessary in coming up with a corkscrew.

“Did you ever see that movie, Is it because I’m black?“

Mesfin looks again at the Americans before creasing up. Then, with one of those mercurial shifts I’m just beginning to get used to, his wicked laugh gives way to bang on the nail comment.

Even with the contextual clue – and the fact we’d been drunkenly singing, the night before, Bob Marley’s tale of the buffalo soldier stolen from Africa – it takes a second or two for his point to land. When it does, I tell how the word on the Vietnam backpacker grapevine is that westerners get a cooler reception there when they’re black. That’s not easy to square with Mohammed Ali’s explanation of his title-costing defiance of the draft.

“I ain’t got nothing against them Vietcong. No Vietcong ever called me nigger.”

Vintage Ali: beautiful, like so much of his behaviour in and out of the ring, but he may have been wrong – or right; but in a more literal and narrowly personal sense than we who’d been thrilled by those words had wanted to believe. It’s easy to be simplistic either way here.  Not long ago I drew the displeasure of a university colleague with little know­ledge of human evolution, and an all too common tendency to moral anachronism. I’d suggested to a student we both taught that xenophobia served us well for most of our history and prehistory, shield­ing us from diseases we had no resistance to. He’d been marked down for working this, I dare say without due care and attention, into an essay for her.

Liberalism can be too confident its hallowed ideals transcend time and context, when a little digging shows them to be luxuries won by the deeds of ancestors less fastidious. Ideas it finds morally repugnant it dismisses – understandably but confusedly – as false and illogical, and there are well intent­ioned souls who still insist that to be racist you must be white.

I wouldn’t like to say whether the African Americans across the terrace, their conduct drawing our barely concealed disapproval, share that belief. But I’m glad one of us is black.