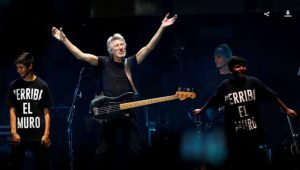 A Pink Floyd fan for half a century, and neutral on the band’s acrimonious eighties divorce, I was thrilled by Roger Waters’ denunciations – an unequivocal exception to the rule that celebs are intimidated by the Western world’s most powerful lobby – of an Israel I recently described as:

[the] world’s premier ethnographic crime scene and, alongside the USA, its most serial breacher of international law. Also – a fact insufficiently appreciated by a pro-Palestinian lobby understandably focused on immediate injustices – up there with Saudi Arabia as regional enforcer, covert and overt, for the West.

Alas, many who support the Palestinian cause nevertheless buy the mainstream line on Syria. A vitriolic example is given by this comment from the pro-Palestinian Israeli – yes, there are more of them than Labour Friends of Israel would have us think – Dimi Reider, who took to FB to say:

If you think Assad is somehow an anti-imperialist actor, or if your basic assumption is that he COULDN’T POSSIBLY gas his own people and it MUST BE a western conspiracy (NB: as distinct from supporting calls for UN inspectors to be allowed IMMEDIATE access to sites of suspected attacks), you’re on the same page in my book as neo-Nazis, Stalinists and holocaust deniers. It also says a great deal about your intellectual capacity and about your propensity to readily fall for dubious journalism that adds to victim blaming and atrocity denials. And no, your progressive/radical positions on Palestine or any other issue don’t make up for that, just like pinkwashing doesn’t mitigate the Occupation. Feel free to unfriend me, because any comments to the above effect are unwelcome. There is a time and place for debates, but not while a genocide is being committed and the perpetrators are actively being provided cover under the flimsiest of guises that simply enable further atrocities.

Reider’s fact-free ad hominems are standard fare in my experience, but I mustn’t stray from my brief here. Being pro Palestinian may be cuddly and non controversial for you and me – akin to being anti-Apartheid in the seventies – but is riskier for celebrities who face the real possibility of blacklisting. So let’s hear it for Roger, a man of principle and courage – and at a stage in life and career where he can take the heat and shrug off any commercial repercussions.

(Back in 2015 I heard Keith Richards on Desert Island Discs – recommended listening for one of the best record selections I’ve heard on the programme. The warmth between Keef ‘n Kirsty is palpable, and when she asks him why the Stones still go on tour – “it can’t be that you need the money” – he says: “well we may be deluding ourselves but we actually think we’re getting better”. Priceless, and equally applicable to Mr Waters.)

My other point is that for every ten who’ll defend Palestine, you’ll be lucky to find a single one defending Damascus in the face of Syria’s seven year assault by those false and venal friends of a people that, not four years ago, gave Assad a deafening mandate. By false friends I mean, of course, governments in the West – and their  friends, those elusive ‘moderate Islamists’.

So what does Roger Waters do on receiving, directly and via his agent, emails from doubly ill informed advocates for that trojan horse of Syrian regime change, the bogus, jihadi embedded and generously funded – by your taxes and mine – White Helmets? 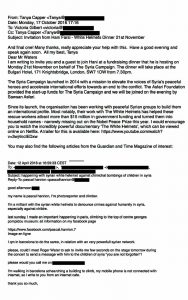 Here’s what he does …

9 Replies to “Roger Waters on the White Helmets”