The Guardian yesterday. But how does Filipovic show that Epstein conspiracy theories are far-fetched? By offering it as given fact:

Online, conspiracy theories now abound. Observers suggest Epstein was killed by one of the men who may have been implicated in his crimes – maybe Bill Clinton, according to the fringe right, or maybe Donald Trump, according to the fringe left. The entire Epstein case has been shrouded and illusory, which does suggest that there is something darker, and deeper, than we are all seeing. Why else did Epstein get such a sweetheart plea deal from Alex Acosta, a former US attorney from Florida and then Trump’s labor secretary – a deal that, because it did not inform Epstein’s victims, violated federal law? That Epstein evaded true justice for so long, and then managed to cobble his reputation back together after serving his (short and gentle) time, had already raised suspicions of which powerful people had an interest in his discretion. That he was able to end his own life while supposedly under federal watch in a secure facility only feeds into the perception that the shadowy and powerful are pulling some dangerous strings behind a facade of justice.

This is dangerous even if it’s not true. America’s criminal justice system, like our government generally, only functions if the population trusts it. The official explanation for Epstein’s death comes down to rank incompetence. And it’s probably true. But of course in this broader context it is fueling conspiracy theories. Of course even those of us who are skeptical of conspiracy theories are pausing here to wonder how this guy got away with so much – and whether the secrets of a great many rich and powerful men will die with him.

The above are paragraphs three and four of six. I chose them because they exemplify within so very few words all that is wrong with a newspaper which – in spite of Iraq, in spite of Corbyn and in spite of Assange – is still the go-to source for liberals and progressives.

First, the five words after the dash – but can you blame people? – set up a Guardian construct a good deal older than their author. It goes like this:

We get why people might suspect perfidy in high places. Really we do. They’re wrong of course – or if a mountain of evidence shows them to be right, they are still wrong on the extent of the problem – but we understand why they, not being as smart and informed as us folks at GMG, might see things that way.

It’s a variant on a technique used by evangelists, cold callers and anyone else in the persuasion game. The device – I understand where you’re coming from. I used to think that too but then I discovered Jesus/Smirnov/adult society – spins a fake empathy calculated to minimise the gap between persuader and persuadee. A whole raft of social psychology – check out attribution theory – throws light on such manipulation. But here we aren’t being sold salvation or a switch to a superior vodka experience. We’re being sold damage limitation and Filipovic, more useful idiot than conscious liar, is tailor made for the job.

Amateurs can use the technique too. Intuitive, it demands no special training. What wheedling parent has not used it to bring a child round to their way of seeing things? So when Jill Filipovic loftily informs us that the official explanation of Epstein’s death is “probably true” – without so much as a word as to how she arrived at that assessment – we’re invited, in that very Guardian way, to once again get with the grown ups on this.

She then offers this gem from the panoramic vista of her Overton Window:

Yes, I can see how we on the ‘fringe left’ would have every interest in finger pointing at Trump, as a way of diverting attention from the misdeeds of our hero, William Jefferson Clinton!

That’s sarcasm, by the way; always a danger when we don’t fully know our audience. Filipovic is a privileged white American whose published writings make clear her immersion in a class and empire denialism so endemic to identity politics. Her gamut of acceptability is confined to that range of views encompassed by the two parties of big business, given their duopolistic grip – it proves monopolistic on second glance – over what passes for democracy in the planet’s most rapacious nation.

The concessions, tiresome but in the circumstances unavoidable, to those who raised eyebrows at the “sweetheart plea deal from Alex Acosta” are soon followed by her return to safer ground. This being that peculiar form of hand-wringing the Guardian has specialised in for as long as I care to remember. What’s the nub of the problem raised by Epstein’s ‘suicide’? That the official explanation – while ‘probably true’ – is ‘fueling conspiracy theories’.

And as any right-thinking Guardianista knows, conspiracy theories are – always and a-priori – just plain wrong.

NB since posting this I’ve been alerted to an OffGuardian piece in similar vein by Kit Knightly. It’s a good piece and I recommend it. Also noteworthy is that more than one of its comments below the line refer to the field day the Guardian of Luke Harding would assuredly have had, in the event of the Epstein saga playing out in Russia. This for instance: 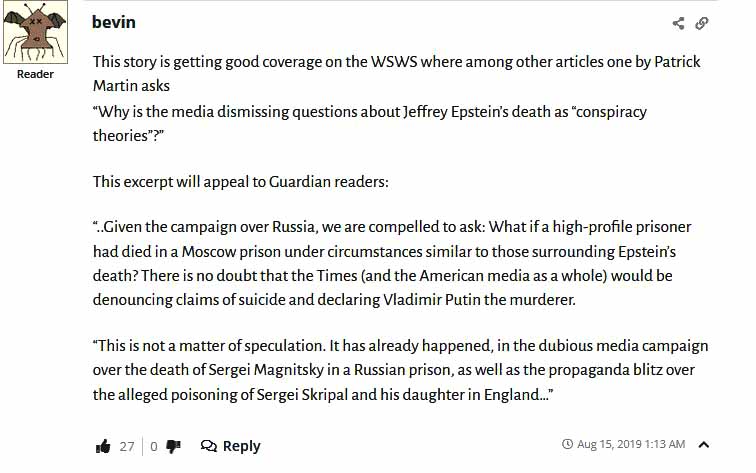 On a slightly different tack, Harry opens with a point I and others have been trying to make for years. Unless we take active measures to counter this tendency within our own minds, a claim repeated oft and loud across the Overton spectrum soon assumes the status of proven fact: 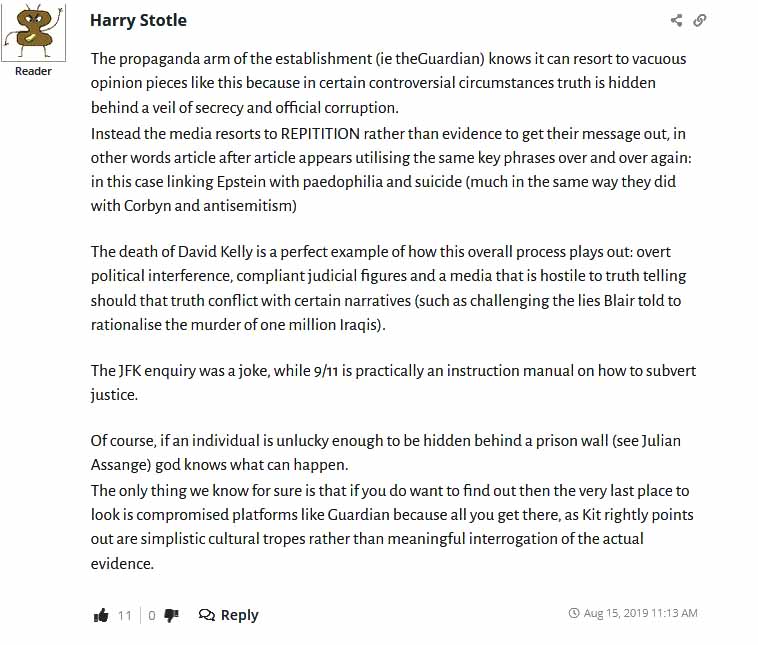 One last point. Suicide versus homicide is not necessarily an either/or. We can’t (validly!) rule out the possibility Epstein was allowed  – talked into? – this exit, perhaps as part of a wider deal. It has been known.

2 Replies to “Epstein suicided? Come on, grow up!”