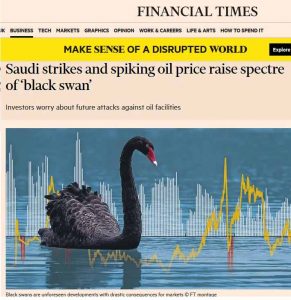 Let none accuse me of frivolity. My reads this month could not be more serious.  As the West continues to vilify Russia, Tony Kevin gives a more sober assessment. While the trashing of our environment – capital’s war on nature – proceeds apace, Bloggers Out of the Woods critically assess the work of Extinction Rebellion. And in the wake of this month’s strikes on Saudi oil facilities Patrick Cockburn asks: do cheap drones mark a shift in modern warfare, posing a major threat to America’s military industrial complex?

Russia and the West : The last two action-packed years (5862 words)

On September 11, Russia expert Tony Kevin delivered an address to the Independent Scholars Association of Australia. The transcript was published ten days later on OffGuardian, a site I probably consult more than any other. Though not primarily about Ukraine, Kevin touched on that country more than once, including this passage:

In 2014 we saw violent US-supported regime change and civil war in Ukraine. In February, after months of increasing tension from the anti-Russian protest movement’s sitdown strike in Kiev, there was a murderous clash between protesters and police, sparked off by hidden shooters (we now know they were expert Georgian snipers), aiming at police.

Crimea’s border with Ukraine was secured against saboteurs. Crimea is prospering under its pro-Russian government, with the economy kick-started by Russian transport infrastructure investment.

In April, Poroshenko ordered full military attack on the separatist provinces of Donetsk and Luhansk in Eastern Ukraine. A brutal civil war ensued, with aerial and artillery bombardment bringing massive civilian death and destruction to the separatist region. There was major refugee outflow into Russia and other parts of Ukraine. The shootdown of MH17 took place in July 2014.

Well that has to be a crock of garbage, right? I mean, it flies in the face of all we know of nasty Russia and valiant Ukraine, stuff that must be true because Luke Harding wrote it in the Graun, and we have triangulation from near identical coverage by the Beeb no less …

Kevin is not the only Russia watcher whose assessments, at odds with assiduously framed and orchestrated mainstream orthodoxies, have brought him deplatformed status. Former Reagan appointees Stephen Cohen, the West’s foremost Russia expert, and Paul Craig Roberts have for years been marginalised. For a critical appraisal of the orthodoxies they fall foul of, we can do worse than turn to this from American Conservative; voice of the noninterventionist right and critical of mainstream narratives on Russia, Middle East, Venezuela and much besides.1

If for no other reason, I’d recommend Tony Kevin’s words for their insights into the ease with which dissident voices can be marginalised and no-platformed in a West fondly believed by its deluded citizens – sorry: the hour is late and this is a time for plain talking, not pulled punches – to be truly democratic and genuinely committed to principles of free speech.

But that’s not my main reason. It’s likely that, since you are still reading, you are more sceptical than most of mainstream narratives. In which case you are likely to be open to the notion that Russia is demonised for reasons that have little to do with those given by the Luke Hardings of this world (whose name is Legion) and a great deal to do with the agenda of an American led West facing slow decline in the face of Eurasia rising. A West whose leaders are busy making choices that may make sense on Wall Street but run counter to your real interests and mine.

It’s also likely, however, that you are too busy with the demands of life – job, family, paying the mortgage – to be as informed as you’d like. Confronted by friends parroting mainstream lines by ‘quality’ media, you find yourself dubious but ill-versed to counter arguments – what about Russian imperialism in Ukraine ?… what about Assad’s use of poison gas? – used to paint black white and justify wars hot, and wars cold.

What Kevin does is summarise the lies and omissions littering mainstream accounts of Russia. We need more such round-ups on live hot spots of mainstream disinformation, and his offering would for this reason alone get my recommendation. But again there’s more. Along the way he has a section headed, “Truth, trust and false narratives” . It opens with a tribute to my favourite blogger, a ‘fearless and brilliant’ Caitlin Johnstone, and shows how such mendacious accounts are assembled and sold to us.

In short, how we are brainwashed.

Out of the Woods are utterly convinced of the need for action addressing ecological crisis by any means necessary. But not all means are necessary.

As one himself frequently guilty of promising posts I either never get round to writing, or write with unforgivable tardiness, I’m in no position to throw stones. This article, which appeared in July, was heralded as part one of three on Extinction Rebellion. It focuses on XR’s tactics, with parts two and three to address defects in, respectively, its organisational forms and strategies.

As best I can ascertain, neither of the latter have yet appeared.

But I find sufficient merit in Part One to justify its inclusion here. Posted on Libcom.org by a frequent contributor, Out of the Woods, it deserves a read by at least two groups: those who doubt the dire straits capitalism’s reckless disregard for nature has brought us to, and those contemplating direct action of the kind XR practices.

It may even be that Out of the Woods’s delay in posting parts two and three has been brought about by its belated realisation that, in discussing the tactical defects of XR, it ipso facto says all that needs to be said of its organisational forms and strategies; indeed, of its entire world view.

I speak as a marxist for whom several things are apparent. One is that the most pressing issue of our time is the destruction of our environment. I needn’t get into the climate change debate here. Alarming loss of species, the consequences incalculable, and gross pollution – especially in the global south – of our soil, the water we drink and air we breathe; these will do for now. Capitalism’s insane but systemic addiction to narrowly defined growth is propelling us with frightening speed toward catastrophe of one form or another.

The second is that existing political processes, discredited in so many ways in the eyes of those who still use such things for seeing beyond the ends of their noses, are no less discredited on this front. These processes – parliamentarianism, trade unionism, EU ‘internationalism’ – have all, to borrow from that crypto marxist classic, The Bible, been weighed in the balance and found wanting. The need for direct forms of protest could not be clearer or more pressing.

The third, recently pointed out to me by Roger (Socialist in Canada) Annis is that a key lesson of the modern era is that Change of the kind now needed has always come about by cross class alliances. The French, Russian, Chinese and Cuban Revolutions all involved workers, peasants, petit-bourgeois and other class forces. So will it be with effective opposition to environmental madness.

My fourth point, following hard on the third, is a distinction between Popular Fronts and United Fronts. The former, commonly referred to as ‘rainbow alliances’, seek the biggest possible mass base. To this end political discourse is contained and ideally eliminated as a threat to the unity of what must always be fragile coalitions, likely to fall apart or be co-opted by darker forces the moment they are tested in action, as they surely will be.

The united front by contrast works on the premise of agreement on a set of specific demands – opposition to fracking, say, combined with tactical steps to obstruct it. Such steps are engaged in by all groups and individuals who can, without dilution of wider principles and fundamental worldviews, sign up for them. Those groups and individuals will work tirelessly for goals they see as worthy but limited, while remaining free to argue the need for more radical measures.

Which is all the introduction needed for this experientially grounded and perceptive Out of the Woods piece.

The devastating attack on Saudi oil facilities by drones and missiles not only transforms the balance of military power in the Middle East, but marks a change in the nature of warfare globally.

On the morning of 14 September, 18 drones and seven cruise missiles – all cheap and unsophisticated compared to modern military aircraft – disabled half of Saudi Arabia’s crude oil production and raised the world price of oil by 20 per cent.

This happened despite the Saudis spending $67.6bn (£54bn) on their defence budget last year, much of it on vastly expensive aircraft and air defence systems, which notably failed to stop the attack. The US defence budget stands at $750bn (£600.2bn), and its intelligence budget at $85bn (£68bn), but the US forces in the Gulf did not know what was happening until it was all over.2

Excuses advanced for this failure include the drones flying too low to be detected and unfairly coming from a direction different from the one that might have been expected.

I have a soft spot for Patrick Cockburn. Even when I think him wrong in the bigger view, which on the Middle East is often, I respect his sincerity and commitment to factually based reporting. In any case, as with many of the sources I find myself consulting – Russia Today,  Al-Monitor, Al-Jazeera, Economist, Guardian and American Conservative to name but few – I needn’t share all or for that matter any of their world views to find usefulness therein.

Shit, I’ll even use the CIA Factbook from time to time!

Take this from HuffPo at the time of John Bolton’s accession as National Security Advisor. Its title says it all: War With Iran Won’t Be Iraq All Over Again. It’ll Be Much Worse. I couldn’t agree more, especially when a large part of its reasoning has to do with Iran’s highly developed ability to wage protracted asymmetric war against conventionally superior forces.

What’s more, as Global Research opined two months ago, US alliances across the region show themselves on closer scrutiny to be shakier than initial appearances might suggest.

But let’s stay with asymmetric warfare. That’s what Cockburn’s piece is about. He doesn’t stick to Iran though. While he sees Tehran (rightly or wrongly) as one possible perpetrator of those drone strikes on Saudi oil, his is the broader point that hitherto decisive military superiority can vanish overnight.

It is unthinkable that American, British and Saudi military chiefs will accept that they command expensive, technically advanced forces that are obsolete in practice. This means they are stuck with arms that suck up resources but are, in practical terms, out of date. The Japanese, soon after they had demonstrated at Pearl Harbour the vulnerability of battleships, commissioned the world’s largest battleship, the Yamato, which fired its guns only once and was sunk in 1945 by US torpedo aircraft and bombers operating from aircraft carriers.

Food for thought, in this my shortest read recommend today.