The West, Europe and Antipodes almost as much as North America, is about to be plunged into an extravanganza of faux democracy as two rival multimillionaires, both with unsavoury sexual pasts, and their billionaire backers face off in the US presidential election 2020.

At the same time Washington’s most humble and obedient servant is conducting – rather more quietly and with cursory mainstream media attention – its own charade. I refer of course to the Extradition Hearing of Julian Assange, now shifted from Belmarsh to the Old Bailey.

Caroline, a British friend for nigh on fifty years, has spent most of her adult life in the States. Though now returned to Blighty, her grown up daughter still lives there – as do many of her closest friends. Yesterday she made this comment on my previous post, Clive Stafford Smith on Wikileaks:

Help! Information and perspective please: I have friends in the States who loathe Assange & Wikileaks because of their perceived role in winning the 2016 election for Donald Trump by the allegedly strategic release of Hillary Clinton’s emails + Democratic Party communications. (Assange and Roger Stone were indeed in communication in some sort of ghastly complicated mess before the election, right?)

These friends agree that the rape charges against Assange were a cynical fabrication and that he should definitely not be prosecuted for the horrendous Afghanistan/Iraq revelations, but this for them was the dominant narrative. Your thoughts?

On the narrow question of the Roger Stone assertions (echoing Guardian writer Luke Harding’s lies about that other Julian connection, with Paul Manafort) I suggest the very same Craig Murray – the UK Ambassador sacked by Tony Blair for revealing his own truths about Empire priorities in Uzbekistan – who is featured in [my Stafford Smith on Wiki post].

Here’s Murray, leaving no Stone unturned. What is Alice-in-Wonderlandianly perverse here is that Stone was brought down by lying that he had links with Wikileaks when he had none! Here’s a taster from a long and, again, fascinating post by Murray. This extract is from his on-air phone exchange with talk show host Randy Credico, a key witness at Stone’s trial, who says:

First of all, the whole idea of a back channel is ridiculous. Julian Assange does not telegraph what he’s going to put out. He never has. He doesn’t compromise his sources and he always puts out that his whole M.O. is the element of surprise. So there was no reason for him to give it to Roger Stone, of the kind of preview of what he was doing. Why would he do that? When everything that he was doing, he was doing carefully, and he was selecting the time and then he’d put it out. There was no reason for him to give anything to Stone. No, Stone was playing the role of someone that had the inside information from Assange. Now, you know Assange, he’s very careful. He’s not going to … if he wanted to he would just give it directly to Trump, you know, but he didn’t. He never did. He didn’t need to go through Stone. But Stone was pretending that he had some kind of access to Wikileaks, and he was selling that to the Trump campaign—that he was able to get something in advance, he knew what it was.

Wider and more important, however, is this. Your friends’ prioritising of Julian’s alleged collaboration with Stone is classically American in its insularity. I say this as one with great affection for ordinary Americans and their culture. My frequent slatings are of its ruling class. Nevertheless, even by British standards, the dumbing down of America has been an extraordinary success story for that ruling class.

Even if the alleged collaboration with Stone had been factually grounded, how could that, on any objective measure, count for more than the Afghanistan/Iraq revelations?

Let me be more specific. In 2016 I engaged frequently with HRC admirers, some of them friends, and with others who weren’t fans but saw her as the lesser evil. I did not share that view then, and do not now. Again I speak of an insularity which begets staggering ignorance within America of its rulers’ crimes abroad.

That ignorance not only sanctifies Obama but ignores HRC’s devastation of Libya through the no fly zones which ensured Gaddafi’s fall (and his sodomising by knife blade, which amused her no end) and with it the transition of Africa’s most prosperous state, with advanced welfare and education systems, to a hell on earth run by rival warlords; the world’s biggest exporter of terror, with slaves openly sold on the quayside at Tripoli.

Bad as these no fly zones were there, her presidential contender ticket of repeating them in Syria – which could not but have provoked head on confrontation between the world’s first and second military powers – similarly counted for nothing with liberals incapable of looking further south, globally speaking, than the Mexican border.

In short, your friends are wrong factually, wrong in the conclusions they draw, and wrong in the painfully limited worldviews which incline them to draw those conclusions.1  Which is a shame, because they are clearly way ahead of the game in having seen through the “cynical fabrication” – aided massively by useful idiots like Guardian house leftie Owen Jones – which has led Julian to his current plight.2

Your friends just have a little further to travel, is all. 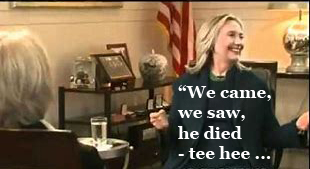