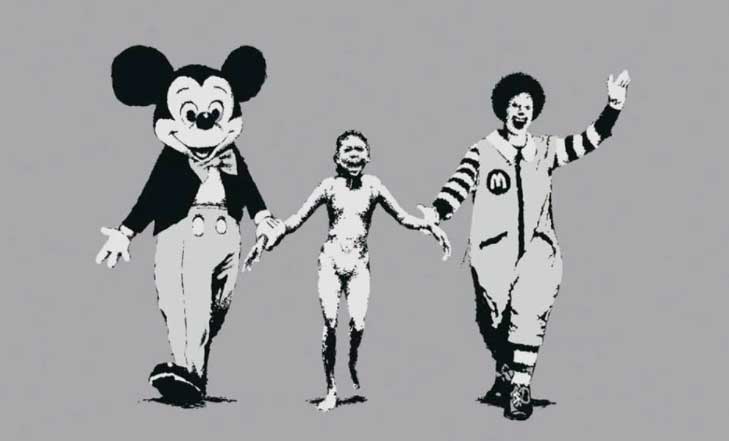 Seen just now on FB. Thank you Allan Edward Tierney for skewering the dangerous, barely conscious default assumption – nourished by Western education, news media, entertainment industries and other forms of drip-fed opinion manufacture – that “we” are the good guys.

THE METHODOLOGIES OF PERFECT MONSTERS

We are supposed to take it for granted that western elites are valiant, freedom-loving heroes who selflessly fight oppression for the good of all with no thought of benefit to themselves.

These saint-like figures never lie, but only work constantly with the facts to expose every kind of abuse by those they have judged and found wanting. They recognize no error in their response to any issue except by human error, never by intent … for they are pure and eternally beyond reproach.

As far as human rights go these elites do not believe they are in any way culpable, having only the best of intention at all times. They do not use torture for instance, they employ ‘enhanced interrogation methods’ instead. They don’t attack or invade nations, they assist and liberate them. No injury to any human being or animal for that matter is intended in the waging of war. In Latin America the USA simply applies its guiding hand to show authoritarian governments the error of their ways, if necessary intervening on behalf of the hard done by citizen of nations they feel it is necessary to intervene in.

Sanctions are not applied to hurt the everyday man, woman or child in the street and if this should inadvertently occur it would be a matter of deepest regret as this was never their intention. That an estimated half a million Iraqi children died as a consequence of sanctions applied to the country by the USA and its coalition of the willing is no doubt a matter of deep regret as a totally unexpected and unwanted outcome. Likewise the estimated 40,000 deaths in Venezuela where sanctions “unfortunately” caused medical supplies to be “unexpectedly” hard to purchase and import.

Western elites never set out to harm anyone but the people they observe from on high doing bad things to their people, such as denying them democracy or human rights. It is their God-given duty and holy mission to reach out to all suffering people. They feel they have no choice in good conscience but to act in the name of all that is decent, kind, generous and good.

The deaths of hundreds of thousands in Hiroshima and Nagasaki was an unfortunate necessity to end the war, in spite of the fact that it was known and is known more widely now that those in authority in Japan at the time were desperate to surrender. There could be no question that the US elites wanted to know exactly what would result when such weapons were used.1 That would clearly be wrong and no western authority ever does anything wrong and certainly not for any underhand or self-interested purpose.

Experiments using mental patients where drugs such as LSD were used to erase memory and potentially place false memories in their minds were a vital necessity during the Cold War. Naturally it was not considered that these people were additionally harmed, their condition may even have been improved, or so the theory goes. In any event it was to save many more lives threatened by the many evils engendered by those malignant elites of the Soviet Union and Warsaw Pact nations.

In the war against all evil doers it became necessary for the guardians of freedom and democracy to do various things which they would otherwise have chosen not to do. These things became necessary as the end of a world of freedom and democracy was so very important that every means of attaining that goal was a vital tool with which to obtain it for the benefit of all.

It could not be right that adhering solely to facts might mean the task of maintaining the ‘Free World’ and expanding it across the entirety of the planet was made weaker, and put at risk the whole project. It would have been irresponsible not to establish a professional organization which created highly believable propaganda in order to best win the war that must be won for the benefit of all.

Unruly individuals and nations not respecting the inalienable rights of those within the western sphere of interest were naturally fair game as enemies of humanity guilty of heinous and unconscionable acts. As good, law-abiding Christians it was natural for the elites of the West to do all they could to bring them down and make them adhere to decent, civilized laws universally acknowledged as just. Wasn’t this simply the obvious right course of action for any such enlightened, temperate and right-minded soul to take?

And after the events of 9/11 didn’t all this become so much more abundantly clear? The righteous had been hit unjustly, desecrating the most perfectly run society on Earth with the most upstanding, pristine-minded, selfless, God-fearing elites the world had ever seen? Was there anything now that should stand in the way of the cull now decided upon to eliminate every single threat to humanity (and in particular to the United States) out there? Naturally not.

The greatest good it was decided, would come from establishing the global ‘full spectrum dominance’ of the USA on land, sea, air and space… for who was more qualified or as powerful, who was more fit for the task regarding this much needed cleansing. Clearly none.

Every weapon of any kind, of any utility to strike at all the arrayed and obvious enemies was to be included in this holiest of all possible fights, ‘The War on Terror’ and the war in fact against all evil anywhere (in the determination of those elites who would carry out these wars). Proxy terrorist armies, Black Sites, Extradition, Torture, Imprisonment Without Trial, False Flag Events, Unceasing Propaganda, Mass Surveillance, Invasions, Drone Assassinations, Destabilizations, Lies, Misinformation, Disinformation, Character Assassination, Fake News and every other weapon imaginable.

And continual until the end goal was finally reached where perfection reigned and was monitored 24/7 on a planet taught to be as righteous as those who now governed over it for the benefit of all, constantly keeping those in line who threatened good order… using the most beneficent methodologies of perfect monsters to do it of course.