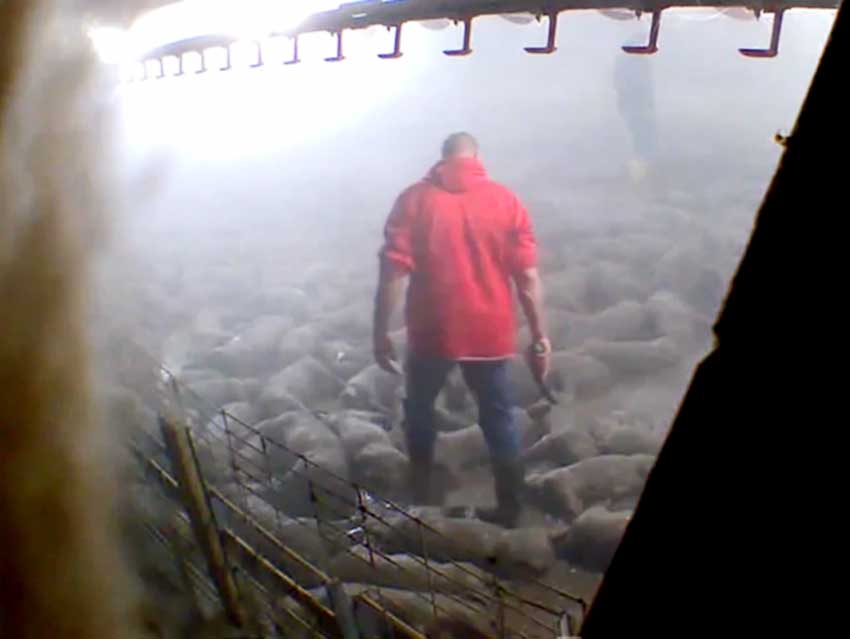 Let me start by fixing one or two small errors and omissions on Abe Lincoln’s part:

Unlike pike, tigers or black widow spiders, humans are ill equipped for solitary responses to the existential imperative of meeting our material needs. To feed, clothe and shelter ourselves we must come together in formations we call societies. Now here’s the thing. To anyone more or less compos mentis, and having notched up a dozen or more spins round the sun, it should be obvious – logically – that entrusting wealth creation to blind markets and the profit incentive is not a great idea. Far better, surely – assuming our measure of success is to waste not and want not – to have it planned by and for humankind.

To stand this gob-smackingly self evident truth on its head you’d need:

Welcome to our world.

I appealed to logic, but can equally make the empirical case. Dreams of Armageddon, lived with for so long we no longer speak of them? Repeated failure, for all the hand wringing and noble declarations of intent, to safeguard this earth for our children and theirs? The horrors, mostly shipped to the global south but now resurfacing in the gig economies of the north, attendant on driving down production costs myopically calculated? All can be shown to derive from the pursuit of private profit under conditions which concentrate, as inexorably as any law of nature, wealth and hence power into ever fewer hands.

But this piece isn’t about thermonuclear annihilation. Nor is it about the trashing of our planet, nor yet the sweatshops of South Asia or the cancer of casualisation. It’s about the realities of pig farming for profit, and I warn you now that what follows is not for the squeamish.

It’s also about the revolving doors of our so-called democracy. And the way sweeping powers, driving coach and horses through hard won civil rights and freedoms, but nodded through to a manufactured backdrop of moral hysteria, are always subject – this too is a science – to scope-creep. Do the Auschwitz conditions which follow as night on day the realities of meat-for-profit leave you sick to the stomach? Too sick to look the other way as most of us do with this aspect – and those others cited earlier – of capitalism’s negation of every decent impulse? Then you have reason to fear the licence our rulers have granted themselves in the name of their War on Terror.

Hog farmers across the country were hoping to avoid a gut-wrenching situation from the coronavirus. But now 3 to 5 million pigs are expected to be euthanized as meat-processing plants shut their doors.

And here’s how Leighton Woodhouse approached the same subject in Aletho News:

Last May, several months into a global pandemic that had capsized the economy, hog farmers had a problem on their hands. With restaurants closed, demand for their product had evaporated. With outbreaks shuttering meat processing plants all over the country, they had nowhere to send their animals to be slaughtered. If kept alive, the pigs would quickly outgrow facilities designed to hold them only for highly abbreviated lives, and the costs of feeding and watering them would become astronomical.

So some major pork producers, among them Iowa’s largest, Iowa Select Farms, made a horrifying decision. They would mass exterminate their animals in one fell swoop, using a technique that promised efficiency for themselves but guaranteed incomprehensible suffering for the pigs.

The method was called ventilation shutdown and it entailed, basically, roasting the pigs alive. Workers would close all of the vents into the barns, shut down the air conditioning, and pipe steam into the buildings until the animals died by asphyxiation or hyperthermia, a process that took several hours. Then a worker would walk through the piles of corpses with a captive bolt gun, shooting whatever stragglers had survived.

The company, however, was unaware that there was a whistleblower within their ranks. An ISF truck driver named Lucas Walker, who had long been appalled by the company’s treatment of its pigs, had informed an activist named Matt Johnson of the company’s plans. Johnson snuck into the barns, placed hidden cameras, and recorded video and audio of the massacre to later release to the news media.

Neither Johnson nor Walker is what most people of conscience would consider a dangerous political extremist. They had no desire to bring any physical harm to anyone; on the contrary, they were moved by the cause of putting a halt to needless suffering. But both a new state law in Iowa and a bill currently being considered in Congress could render them such in the eyes of the criminal justice system. It is just one example of the moral hazard posed by the ongoing effort in Congress and within the Biden administration to erect a new domestic security state apparatus in response to the Trump years and the Capitol Riot — an effort the CIA has joined, while animal rights groups and environmental campaigners have been explicitly listed among its targets.

In 2011, Iowa Select Farms had been the subject of an undercover investigation by the animal rights group Mercy For Animals. Liz Pachaud, an animal rights activist with MFA, had taken a job at the farm and, over the course of four months, documented appalling conditions there with an undercover camera. When the gruesome footage was released, it caused a major crisis for ISF, with numerous grocery chains dropping the company as a supplier.

The following year, the animal agriculture industry successfully lobbied the Iowa state legislature to make what Pachaud had done a crime. The law was one of many so-called “Ag Gag” laws in agricultural states across the country, which make undercover investigations on factory farms by animal rights groups unlawful (an estimated 99 percent of animals raised for meat are factory farmed; the very few small family farms that are left are being systematically driven out of business by the industrialization and economic consolidation of the industry).1  As Ag gag laws effectively criminalize speech, some of the more sloppily written among them have been subject to successful constitutional challenges; Iowa’s 2012 law was among them. In 2019, a federal judge struck down Iowa’s 2012 law.

That same month, a new Governor took office in Iowa. Kim Reynolds had won her office in 2018 with the conspicuous help of Iowa Select Farms. ISF’s co-owners, Jeff and Deborah Hansen, have donated nearly $300,000 to Governor Reynolds. During the 2018 race, Deborah was the Governor’s biggest individual campaign contributor. Kim Reynolds had been the guest of honor at the Hansens’ family foundation.

Governor Reynolds had barely been in office a month before a newly re-written Ag Gag bill was introduced into the legislature. By summer, she had signed it into law.

Now, Johnson has become the first person to be charged under the 2019 Ag Gag law for attempting to enter one ISF facility. He is facing a separate wiretap charge for the hidden cameras in the barn where the company carried out its ventilation shutdown. In the meantime, yet another Ag Gag law has passed through the Iowa legislature, which increases penalties for the crime of planting hidden cameras in animal agriculture facilities. Governor Reynolds is expected to sign the new bill into law any day now.

As should surprise nobody who lived through the political aftermath of 9/11, these laws were passed under the pretext of combatting “terrorism.” Radical animal rights and environmental activists have, in fact, long been among the FBI’s top “domestic terrorism” targets, as well as targets of draconian new legislation. In 2006, at the behest of the pharmaceutical and animal agriculture industries, Congress passed a law specifically defining animal rights activism aimed at “damaging or interfering with the operations of an animal enterprise” — whether or not violence was involved — as “terrorism.” Direct Action Everywhere (DxE), the group Johnson belongs to (I used to cover DxE as a reporter and have since become a member myself), was the subject of a major FBI investigation over the “theft” of two dying piglets from a factory farm. After he was discovered, the FBI interviewed Walker, asking him if DxE sells drugs or guns to finance their activism, and tried to recruit him as an informant into their activities.

This dismal history should be an obvious cautionary tale about the hazards of enhancing the state’s power to surveil and prosecute people for politically motivated activity, beyond the ample criminal laws already on the books. But in the wake of the January 6 MAGA Capitol Riot, progressives, in particular, have gained an appetite for more.

Currently, a bill with 196 Democratic co-sponsors (and 3 Republicans) is before Congress, which would begin to build the legal and bureaucratic architecture for an interagency domestic terrorism response unit within the Department of Justice, the FBI, and the Department of Homeland Security. The legislation is explicitly a response to the Capitol Riot and is pointed particularly at “White supremacist” and “neo-Nazi” groups — a particularly unsympathetic and uncontroversial cast of culprits.2

But the PATRIOT Act was also purported to target only the most hateful, murderous people in the world — Islamic terrorists3 — before it metastasized into a massive surveillance state infrastructure that spied on literally every single American with an internet connection. Are we to expect that a domestic analogue to the PATRIOT Act will draw the line at violent sociopathic racists? The intelligence community demonstrably does not: a recently declassified report lists animal rights and environmental activists, abortion activists on both the pro-life and the pro-choice sides, anarchists, and anti-capitalists as potential domestic terrorist threats.

If we’ve learned anything from the last few years, it’s that corporations are all too eager to co-opt the progressive rhetoric du jour, whether to sell sneakers or to protect themselves against workplace discrimination lawsuits. And the FBI has been more than willing to investigate activists engaged in non-violent activities as terrorists under the 2006 Animal Enterprise Terrorism Act. A new domestic federal law enforcement bureaucracy dedicated to surveilling and investigating anyone the government claims to suspect is a “terrorist” would be a bonanza to industries facing concerted activist pressure, whether animal agriculture or fossil fuels, or a company in any industry facing a unionization drive. What possible reason is there to believe that corporations won’t lobby the Biden administration and future administrations to use their new powers to ensnare activists who campaign against them, all in the name of ridding the country of violent political extremists and “insurrectionists”? The answer is that there is no reason to believe it, and every reason to believe the hunt for “domestic terrorists” could eventually be turned against anyone with the will and the means to effectively confront those who hold concentrated political and corporate power — including through strictly non-violent means. A demonstrated willingness to use violence has never been a requisite for law enforcement agencies to brand those they wish to malign as “terrorists”, as DxE activists know all too well. All that’s required is their willingness to use the label.

After 9/11, passage of the PATRIOT Act was enabled by the bullying of dissidents in a climate of enforced jingoism. It was dangerous to ask critical questions then; safety was found only in conformity. We’re in such a moment again, but this time from within a liberal rather than a right-wing consensus. But the outcome will be the same: the hardening of state power, made possible through organized collective hysteria.

6 Replies to “Pig farming, Profits & the War on Terror”