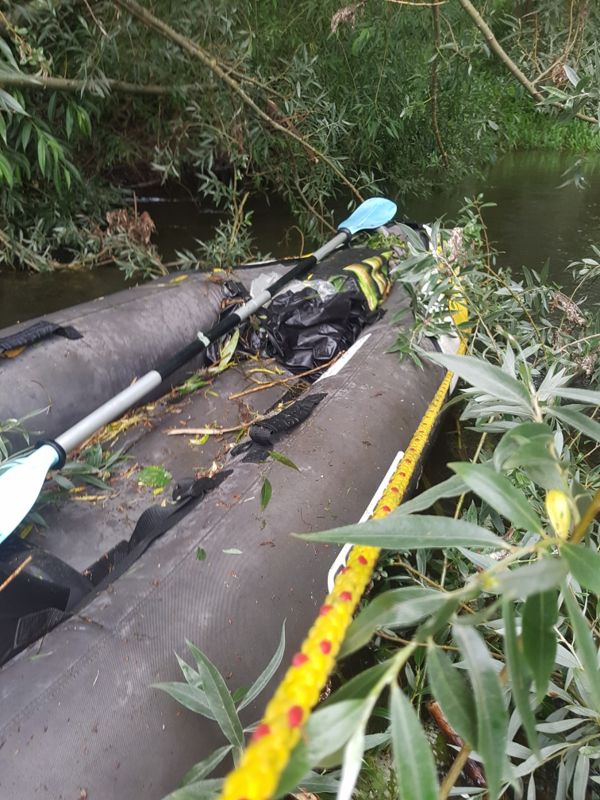 The River Soar rises between Lutterworth and Hinckley, then takes a northerly course through brown-field, cattled meadow, reedy margins, trailing willow, dreary town and many an idyllic village – as well as Leicester and Loughborough – to top up the Trent at Ratcliffe on Soar, two hundred metres east of Trentlock. From there it’s four miles downstream to Beeston Marina and, for the trip I have in mind, journey’s end.

Why, oh why, did I not do more thorough reconnaisance before putting in, Wednesday evening, at Langham Bridge a half mile upstream of Narborough Station?

It’s not that I did no homework at all. Earlier this year I made two scouting trips to Narborough, having settled on this olde village, now a dormitory town for Leicester to the northeast, as the highest feasible put-in. Further upstream is Croft, the Soar little more than a brook; canoeable, just, but for its being blocked right, left and centre by felled alder and willow. How do I know? I walked a mix of meadow, dead factory and sixties semi to inspect.

On that Croft to Langham Bridge stretch, downed arboreals span the stream to trap debris not only of the casual litterbug but the more calculated sociopathy of the serial fly tipper. Trashed armchairs, Amstrad era PCs and spent tractor tyres do not enter our rivers through common or garden carelessness.

Wiser heads might have thought to check that the same did not apply from Langham Bridge to Narborough. Mine did not, due on the one hand to limited access to the bankside, on the other to gung-ho optimistics. Ditto the stretches downstream of Narborough. This sprightly stream, I assured myself on no firmer basis than a few random forays where right of way allowed, would see me sailing northbound to have me home in three days tops.

With gridlines a kilometer apart, this is how far I got in four hours after putting in just before six on Wednesday evening. 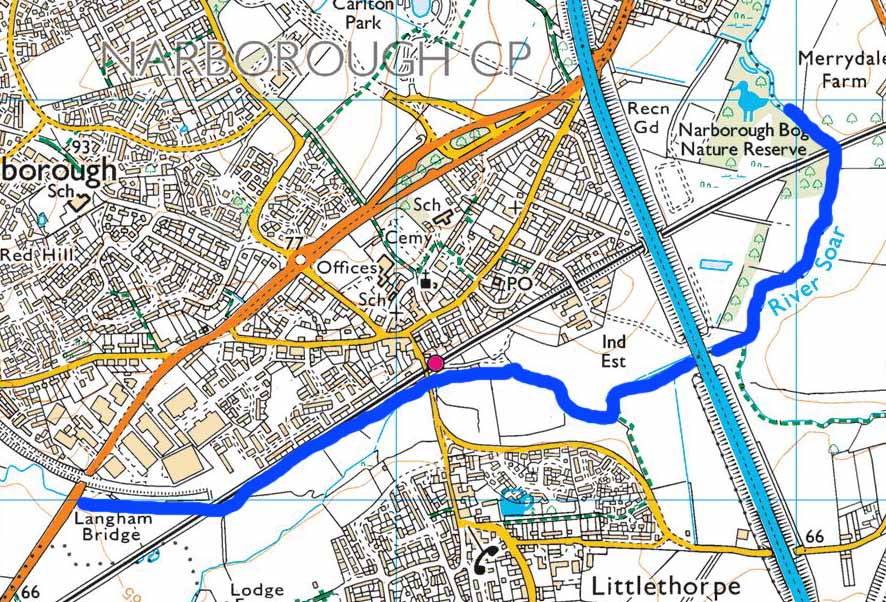 And this is why. 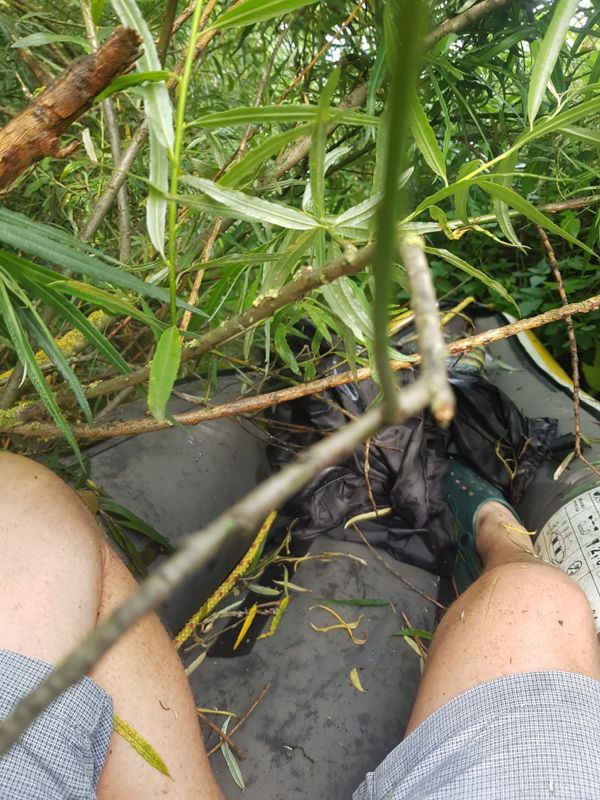 But I’m ahead of myself. In baking heat that afternoon – day after my latest court gig (judge’s ruling awaited) in Roddis v Sheffield Hallam – I trundle trolley, canoe and kit out of the garage for the five minute trek to Beeston station. With senior railcard, a single to Narborough sets me back £7.70.

I have a twelve minute wait so, with juice at 90%, hook phone to solar charger and drape the three folding panels over a fence to drink up the dazzle beating down on platform 2.

Twenty minutes later phone and charger are still there, while I speed southwards. I’ve just got comfy in rear carriage when I realise. Fuck, fuck and thrice fuck! Hotfooting the six carriages I find the conductor in first class at the front. Can he ring Beeston while I alight at Loughborough for the next train back?

A few minutes later I ease heavy rucsack and trolley onto the platform at Loughborough, where the conductor runs up to say no answer at Beeston but good luck. I thank him anyway, take the next train up the line, find items exactly as left. Not for the first time in respect of kit lost and saved I hear, over right shoulder, the discreet Jeevesian cough of my guardian angel as I plonk one sorry arse on a bench to await the next down train.

A change at Leicester has me in Narborough by four-thirty, the heat stultifying. A three minute walk to School Lane puts me on the No. 50 for a free ride to the Dovecote Inn, four stops on and four hundred metres from Langham Bridge.

I taste Cornwall by way of a pint of Doom Bar, kit parked on the grass outside the bay window where I sup. Just before six I reach Langham Bridge, carrying the B4114 with its relentless stream of biker and commuter, trucker and white van man.

On my second recce I’d assessed this point and considered a dusk arrival. I’d inflate the kayak and sleep in it – the traffic above my only lullaby – for a crack of dawn put-in. Now, with close to four hours of daylight still to be had, that doesn’t make sense. 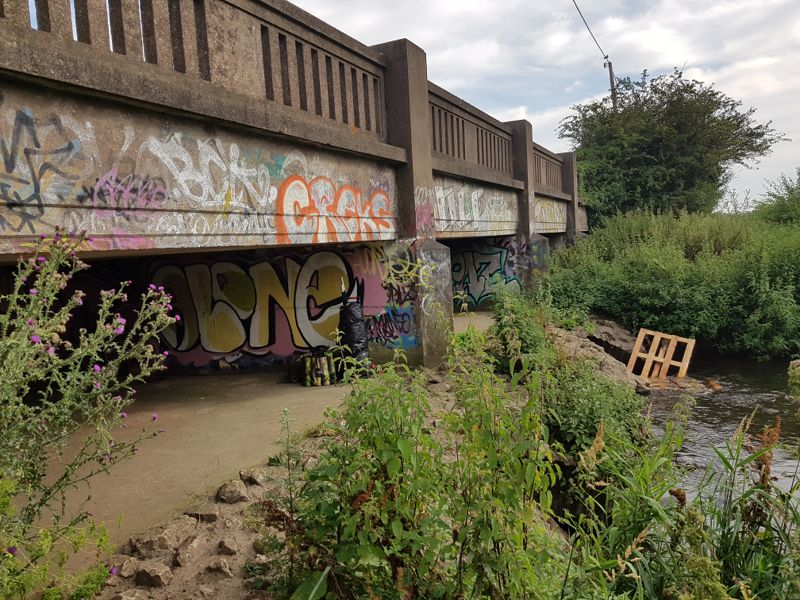 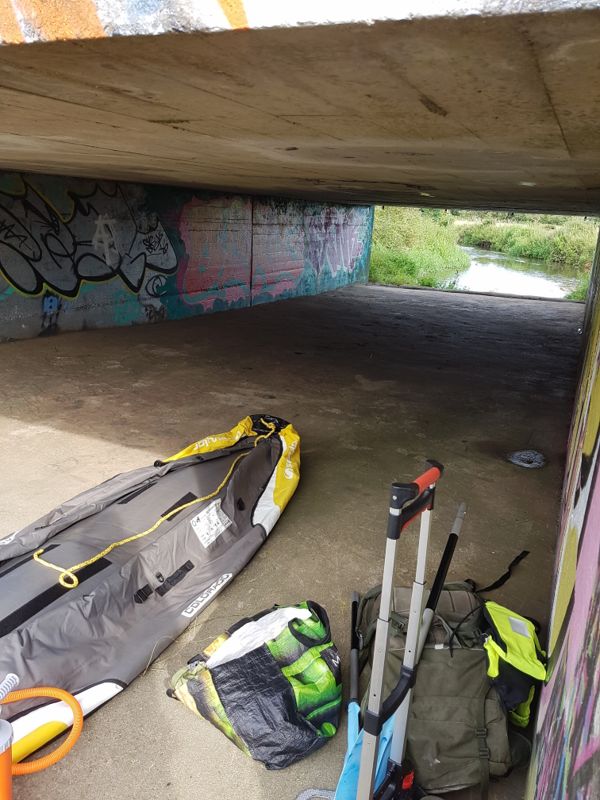 The view upstream toward Croft … 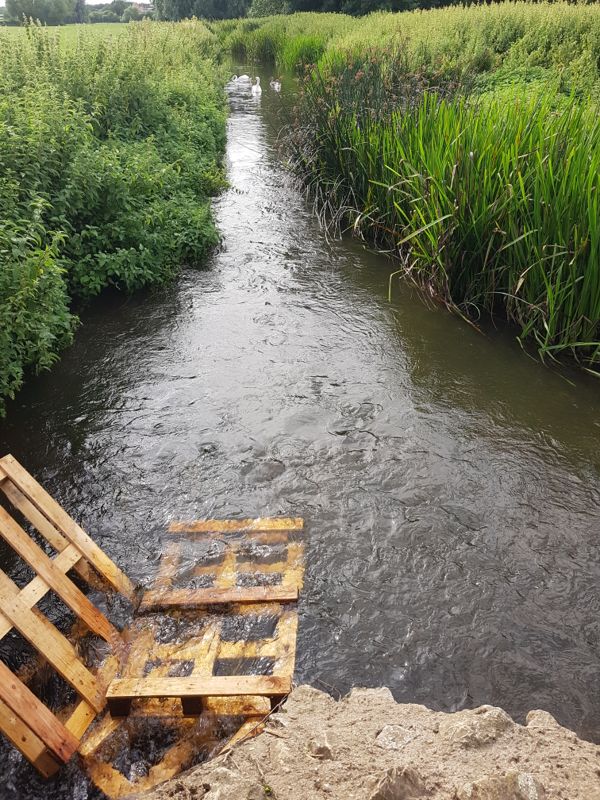 … and downstream towards Narborough. If the river stays like this, I’m in for a great ride. 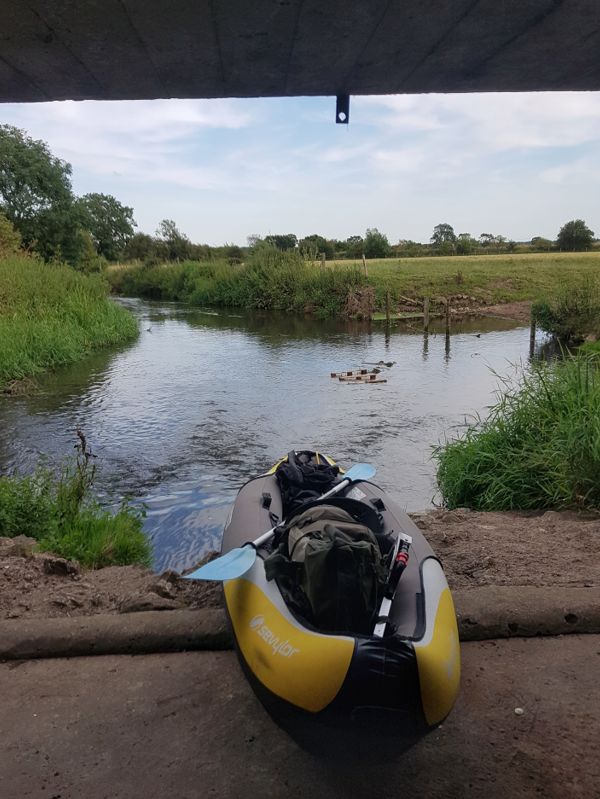 Don’t look back, they say. But I can’t resist. 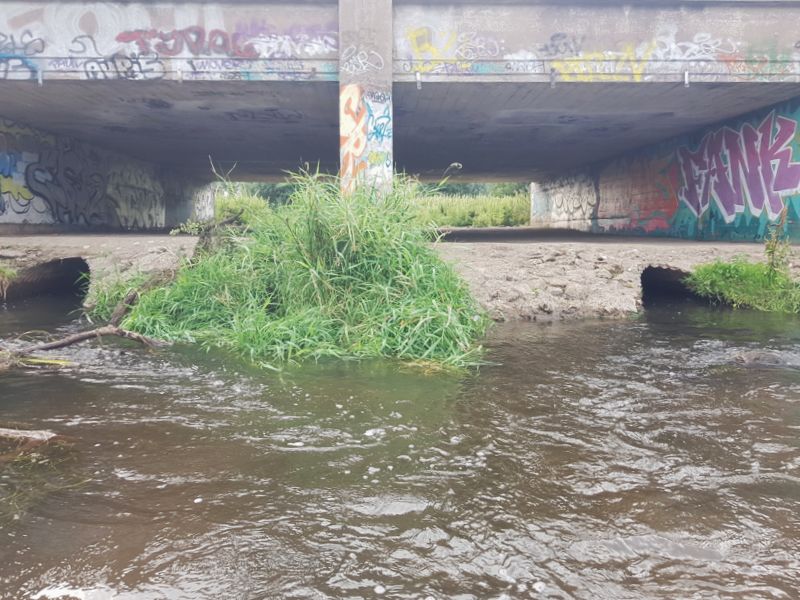 My first obstacle comes in five minutes. I improvise and overcome, lifting the sapling, taut as a coiled spring, over my head. Its elasticity presses onto my back to push me forward and clear. 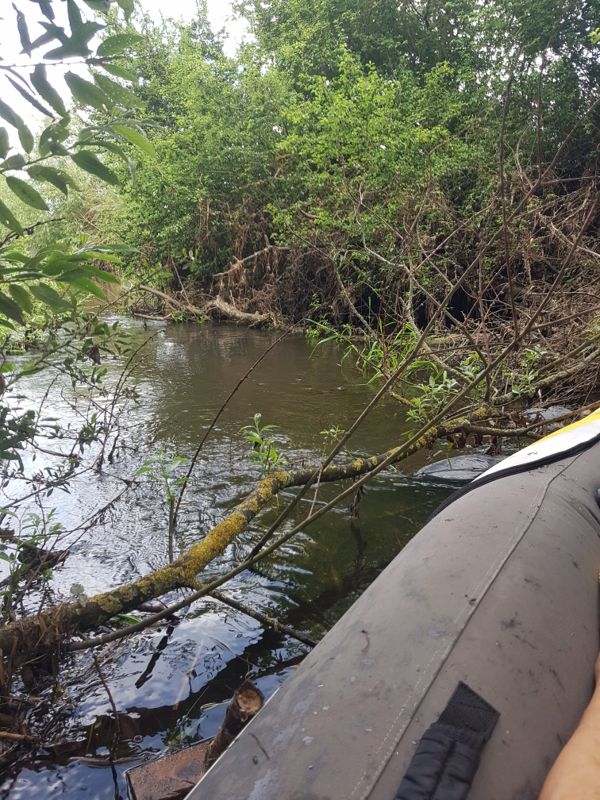 But there’s more, much more and much worse, to come.

Wading in water up to my crotch, else balanced precariously on floating willow branch, I soon lose count of the times I’m obliged to haul, lift, push and thread the boat past the likes of this. 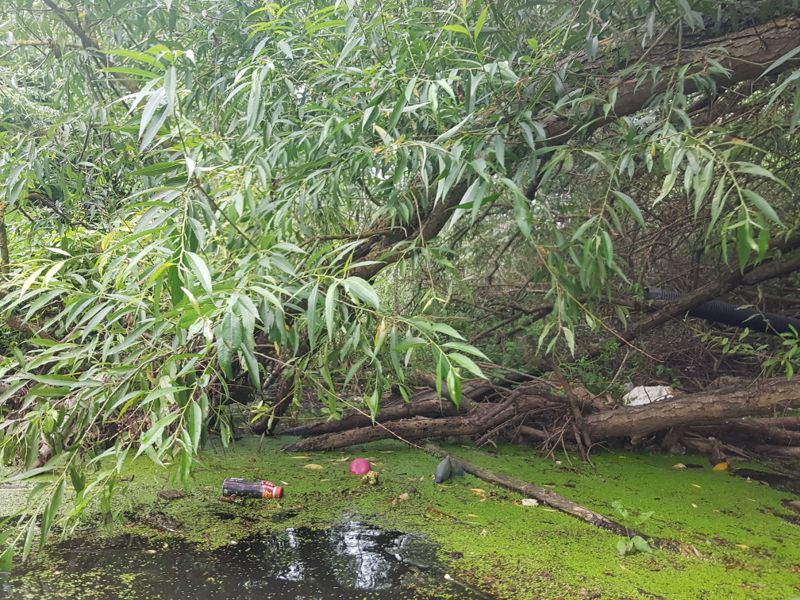 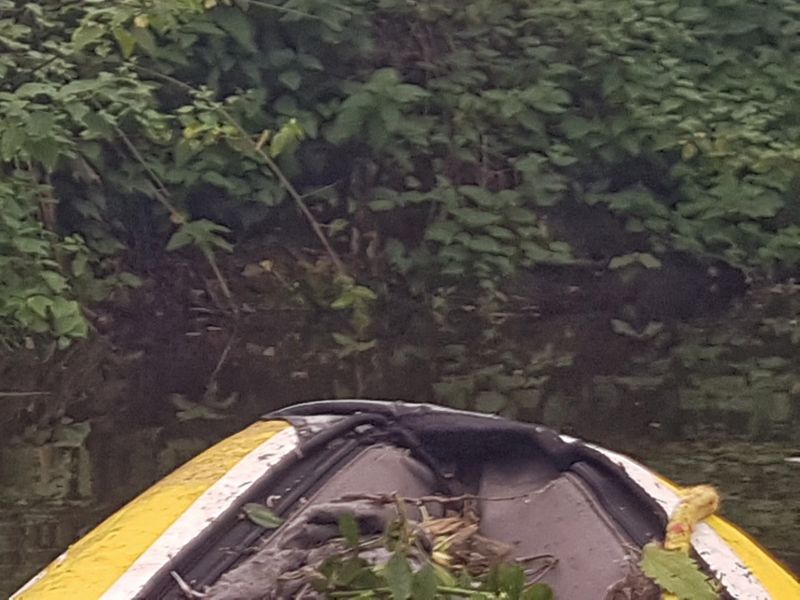 What you have to realise is there’s no way back. Some of these barriers take twenty minutes to get past, and that’s going downstream. Retreating upstream doesn’t bear thinking about.

What you also have to realise is there’s no way out either; no way of giving up, pulling kayak up the bank to slink back to the Dovecote to lick wounds and call home for a humiliating pick up. I’m on my Jack Todd with no reverse gear.

Here, on an atypically clear stretch, is why. On either side the river lie; swamp nettled jungle, my oh fucking my. 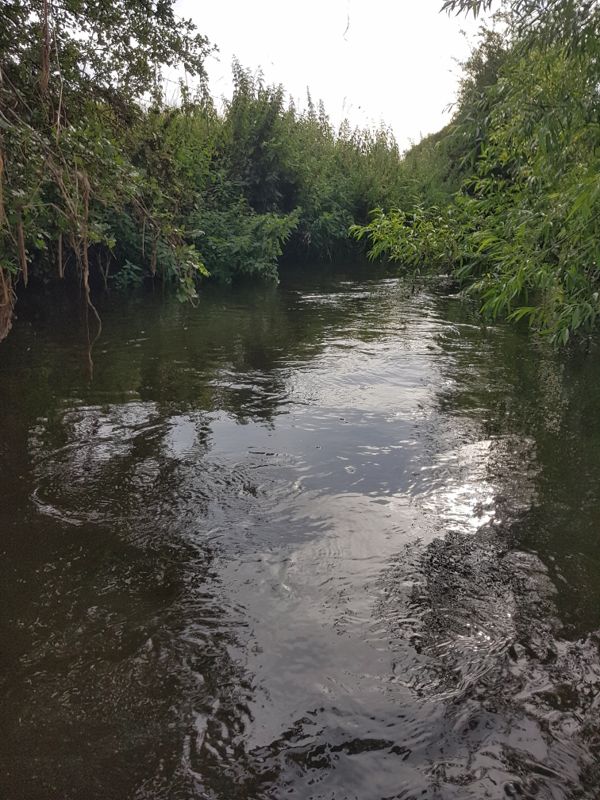 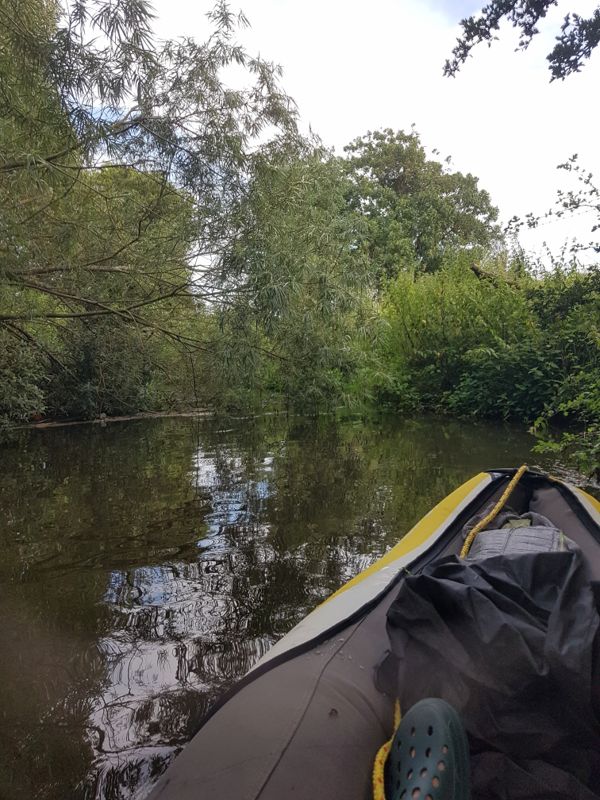 If I’m using an incredibly rude word beginning with the sixth letter of the alphabet rather a lot, that’s because it features prominently in the running discourse the three of us – me, myself and I – are having all the fucking way down.

Worst moments? One, after seeing this family of swans ahead … 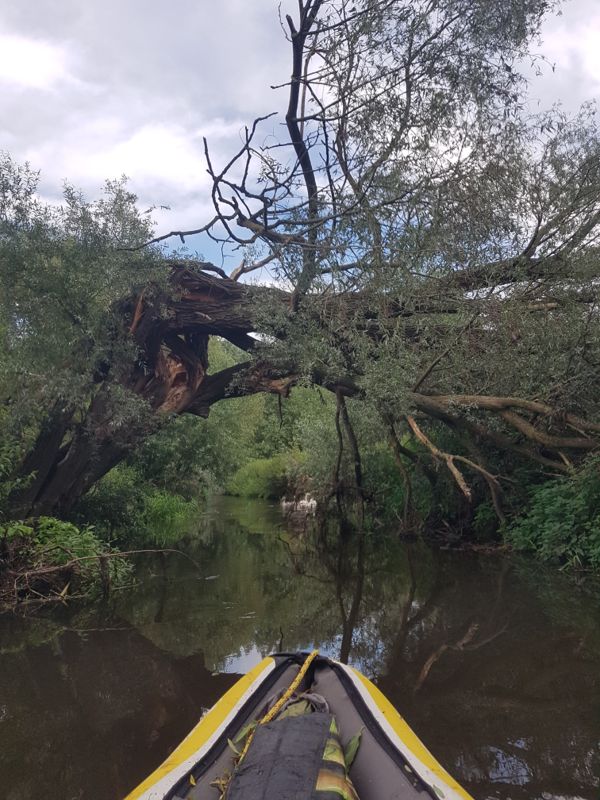 … I trap them round the bend, where the stream quickens and another felled willow dams it. I’m bearing down on the hissing group, paddle at the ready for an attack that doesn’t materialise. At the last minute ma and cygnets dive like beavers under the woody tangle, I guess to surface downriver. For his part, pa beats an upstream course to my left, presumably to regroup later.

Me, I’m relieved, but spend a good fifteen minutes getting through.

Two, discovering a leech – those brown and yellow jobs: the worst – on my thigh after enforced wading. It hasn’t yet clamped on. I press right forefinger into ball of thumb, then with a savagely catapulted flick send the fucker skyways.

Three, standing on a floating willow trunk a foot diameter, holding for dear life onto a slender branch overhead, free hand gripping paddle and painter rope. When handrail sways, and trunk spins, I have a dilemma worthy of an undergraduate seminar. Do I let go painter and paddle to forestall a plunge through floating trash for the full immersion I’ve thus far avoided? Or stick to base principles and keep contact with my craft? In the event I steady myself, but it’s yet another test of nerves; one more moment of less than total contentment.

And so it goes, all the way past Narborough with ne’er a clear run above fifty metres. Look at this one. The quick of uptake will gather from angle of exposure that the happy snapper is not on board. 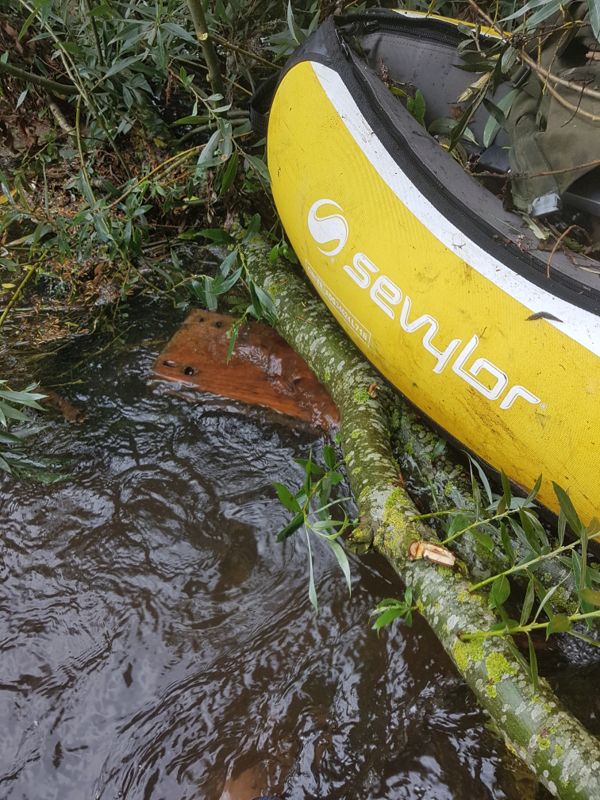 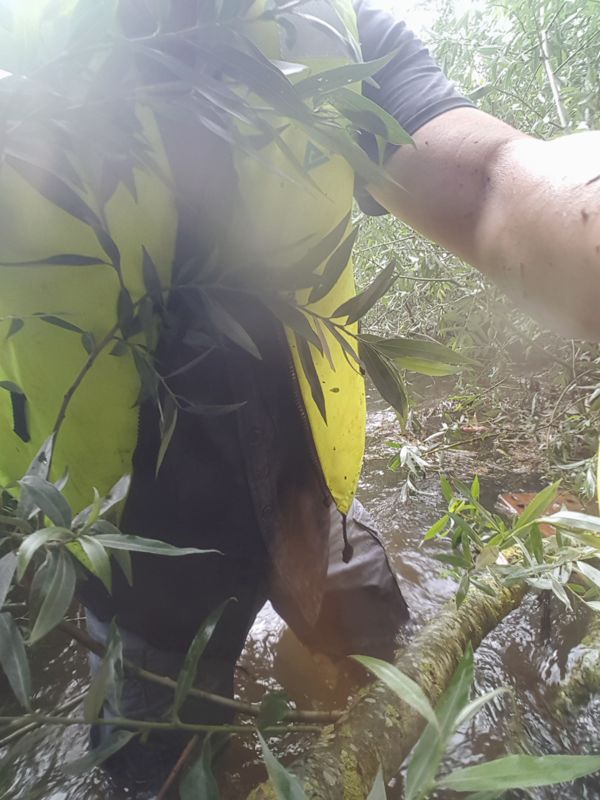 You get the idea. So when, with big hand at eight and little at ten, I beach boat and scamble up the east bank onto open meadow at Merrydale Farm, with the aptly named Narborough Bog Nature Reserve on the west bank, I’m done in. It’s down on bended knee for a quick prayer of thanksgiving. Well not quite, but it’s deliverance of a kind, with duelling banjos, crossbow bolts and Appalachian retards the only things missing.

With light draining from sky I’d happily sleep on this vast meadow – by keeping a literally low profile I can stay out of sight of the farmhouse – but half a mile away a large herd of tan steers, bullocks as it turns out, munches toward me. For the wild camper cattle are bad news. Bovine curiosity triggers unusual behaviour to tip off Farmer Vigilant that summat’s up.

I’m sodden from river water south of the belt line, sweat to the north. I’m filthy; arms and legs a criss-cross, hatch mapped and throbbing, of cuts, scratches and nettle stings. Oh, and my left hand’s puffed and swollen. Does we got poison ivy on this sceptered isle?

I deflate and roll the canoe after ten minutes of clearing out armfuls of willow twigs and leaves, then strap to my trolley. The OS map on my phone tells me a two mile walk will take me out of the meadow, onto dimly lit streets and finally a narrow unlit path to the Grand Union Canal at Whetstone.

Just kidding. It gives me directions only, not the lighting conditions. I arrive well after dark. 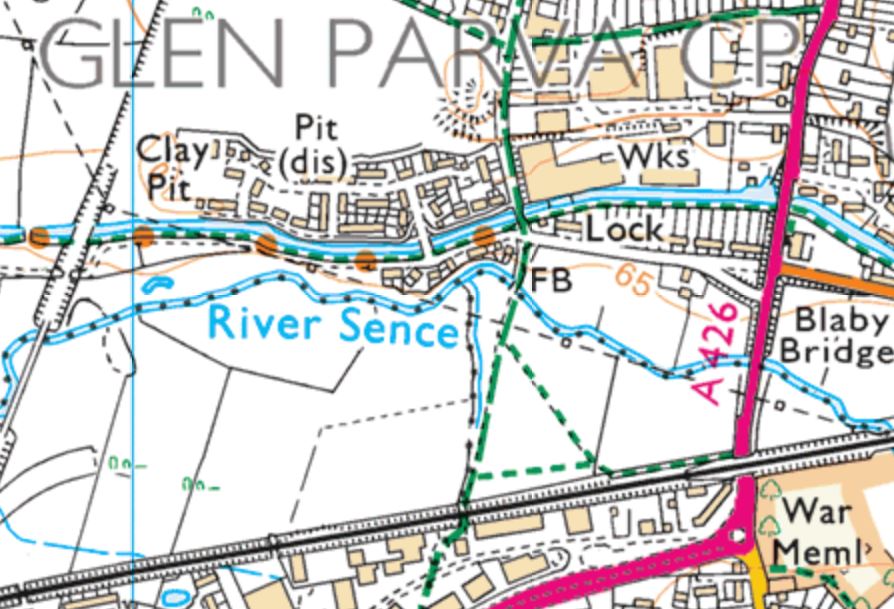 At the lock where footpath crosses towpath, west of Blaby Bridge, I reinflate by torchlight, put in and glide due west through the gloom, looking to overnight at the earliest op.

Which proves better than I could have hoped for: the next lock, where Soar joins Grand Union in Mid Nowhere. Perfect. No chance of sleeping on the boat; it’s dripping wet. Choosing a strip of mown grass, already dew sodden, atop the well of the lock across from the tow path, I unfurl sleeping and bivvy bags for a night with the stars, kit below upturned canoe. I floss and brush teeth of course. You gotta have standards.

I’d kill for a shower. For one insane moment I stare down – in contemplation not of ending it all but of hygienic plunge – into the dark slickness of the lock. A big carp rolls and I step back. It’s a scruffy me that sheds wet clinging garments to ease into the timeworn silk liner, ripping it as I go. Fuck. That’ll be forty quid to replace. It’s been one hell of a day but there’s more to come.

That’s another story though, told in part two.