Journalists who know what’s good for them please editors, while editors who know what’s good for them please proprietors. Proprietors not only crave honours and seats at the high table. They also need advertisers and, in the case of the Guardian, wealthy sponsors like Bill Gates and George Soros. Such men need do nothing so vulgar as to spell out their expectations on editorial content. It suffices that they can withdraw their love at any moment.

Monbiot has repeatedly denied he wants a military attack on Syria. But if he weakly accepts whatever narratives are crafted by those who do – and refuses to subject them to meaningful scrutiny – he is decisively helping to promote such an attack.

I do not loathe George Monbiot, though I’ve despaired for him. His excellent output on matters environmental is, to put it kindly – too kindly, say some of my critics – marred by refusal to see that the profit motive trashing our planet also drives our wars on states disobedient to western rule.

If he simply kept his mouth shut on the latter, that would be bad enough – a grave failure, in so publicly radical a figure, to do as E M Forster urges and only connect – but in his (objectively) empire-serving positions on Syria, Russia and Julian Assange he goes out of his way, and out of his depth, to vilify those who take a stand against the demonising. 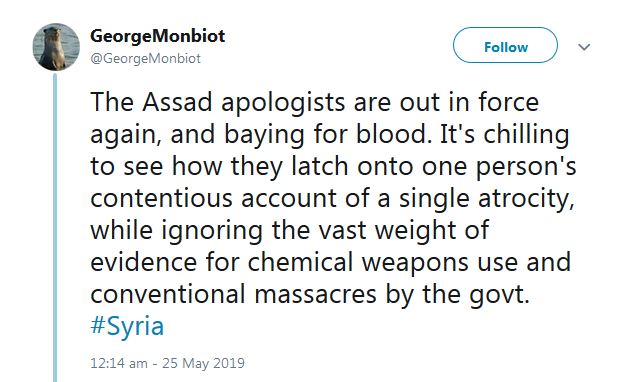 The inverted commas around ‘anti-imperialist’ point to a deeper truth

Former Guardian columnist Jonathan Cook – who quit over heavy censorship of his writings on Palestine and is at his most insightful on the raisons d’etre  both of liberal media in imperialist states, and of leftist writers within liberal media – was freely quoted in my 2020 post, What’s the point of George Monbiot?

Here he is again, on Twitter less than a week ago: 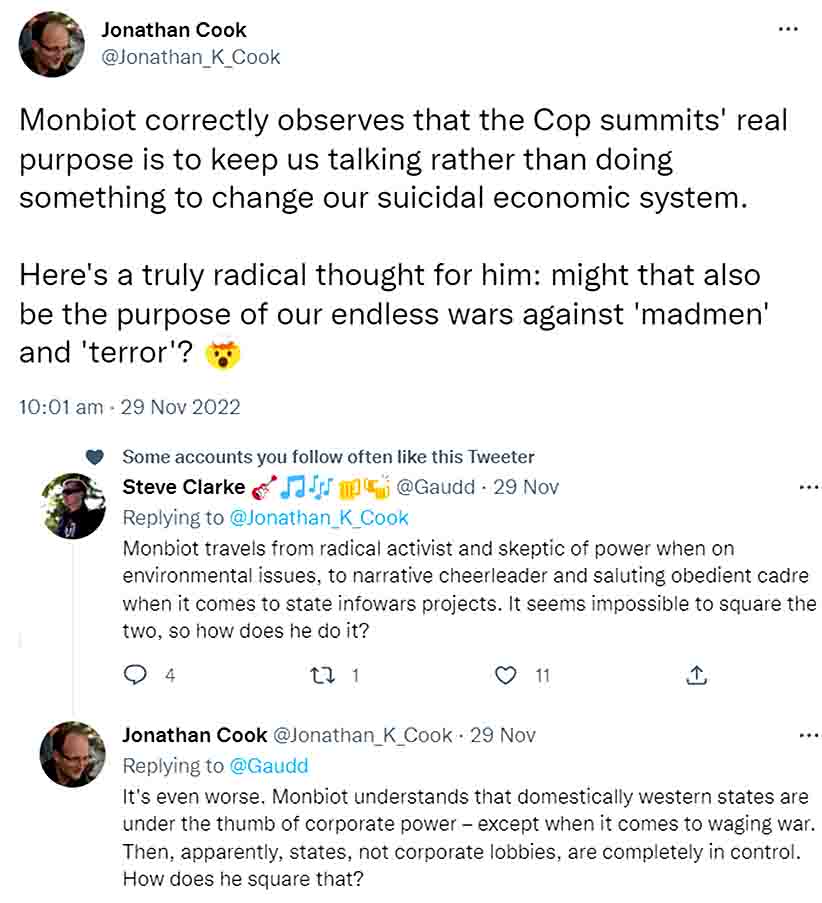 For an assessment of George Monbiot’s services to empire demonising of empire’s defiers, see Monbiot, Syria and Universalism. In the five years since writing it, my thinking has undergone that process of simplification which time, and time alone, allows. In a nutshell, George is blind to the truth – hence the throwaway condescension of his inverted commas in ‘anti-imperialist’ left – that the US Empire, to which his and my country is a junior partner, really Is A Thing.

2 Replies to “Jonathan Cook on a myopic Monbiot”