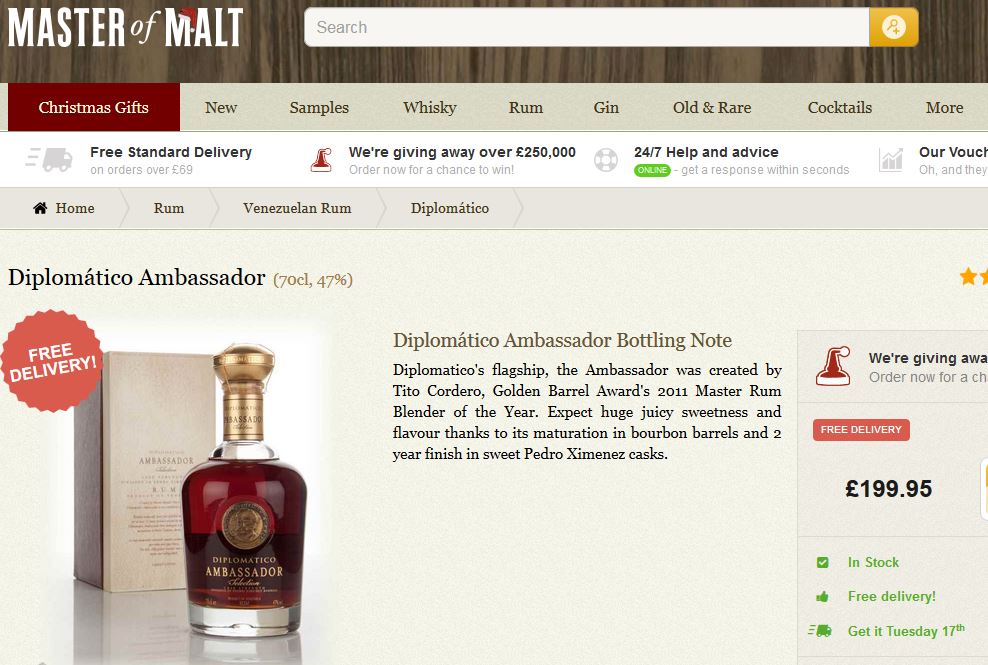 None of you need reminding what Santa stuffed in his sack this year for delivery down every chimney of this sceptred isle, twelve days early in a cloud of soot.

But tory landslide or no, we Brits keep calm and carry on. At this time of hallowed tradition, my thoughts turn amongst other things to rum. On Crimbo morning, circa 1960, my dad would have been gifted a bottle of Captain Morgan or Lamb’s Navy. Part of the ritual had him pouring what he called a “lacing” into the breakfast tea of his kids.

The teeniest drop it would have been, but enough for the tea to taste exotic. Enough to quicken the ticker and put lead in the pencil.

So, Xmas being a time of nostalgia, I this morning trawled online with a search on rum. As you can see from the image above, choice is no longer confined to brands of grog priced to within a ha’pence of one another; brands with square deal nautical names and roger-the-jolly logos.

No sir – a tidy sum may be spent these days on your quality tot.

On expertreviews.co.uk Sasha Mullen and Kate Hilpern inform us that “rum, once seen as the unrefined tipple of salty sailors, is making a revival”. For its part Esquire, under the heading, 10 Best Rum Brands Right Now, assures us that “rum is having its moment”.

Well now, how do you suppose this came to be? A whimsy riding the thermal currents of what a few of my New Age friends refer to in hushed tones as The Universe?

(I kid you not: I know for a fact some of them pen begging letters to this august entity. Kneeling by the bed, hands clasped, to ask the bearded white guy in the sky for a bike is so yesterday.)

Or as a shivering, quivering sliver of zeitgeist, zig-zagging across the ether with its message for the genteely sozzled that it’s Time For Change in the drinks department?

Or have they been played?

“It’ll be rum’s turn next”, we sagely foretold. And so it proved. Uncanny prescience or what?

Mind you, I had insider knowledge. Early nineties it was my job – again I kid you not, though for reasons of shame and guilt I’m not gonna say why – to follow such momentous periodicals as Direct Marketing Monthly, and Marketing Weekly.

One of those long gone days had me sipping my morning coffee over a Marketing Weekly, its centre spread given over to celebrating that coming together of art and science, also known as commercial propaganda, in the repositioning of cider.

This flagship journal to an industry not much given to self awareness, in which the merest trace of scepticism or meaningful reflection is toxic anathema, was beside itself in gushing tribute to the way a tipple hitherto associated with Joe Grundy, and straw chewing yokels from the West Country, had been ‘repurposed’. Now in cute bottles – farewell Strongbow’s quart flagon and male stopper – with sexy monikers like WKD, White Lightning and Angry Orchard, it was being shifted in vastly enhanced quantities at vastly enhanced prices to the most lucrative segment of the hospitality market.

I mean the twenty-something pubbers and clubbers, who were not only knocking cider back by the drayload but – this being the lesson Marketing Weekly wanted its readers to take onboard – doing so as if it had been their idea all along.

If you can do that with fermented apple pulp, I recall musing, what else can you do?

Almost three decades on I’m still pondering that question. Could you use the same methods to sell the idea of Corbyn as a traitor and vile antisemite? Of Johnson – the man dismissing as ‘chickenfeed’ a second annual income of a quarter-million – as a man of the people?

Not according to the Guardian you can’t. A Friday the 13th post mortem by political columnist Kate Proctor gives five reasons why Labour lost. And – it’s the damnedest thing – four years of relentless and unprecedented vilification, lies and smear by the Fourth Estate, not least by the Guardian – had nothing to do with it.

Nothing at all. How stupid of me to think otherwise, when to do so is to drive a cart and horses through the idea that ours is a functioning democracy premised on informed and independent minded citizens.

How stupid too of Caitlin Johnstone, who on the same day penned this:

Stupid too of Jonathan Cook, who tweeted a day later: 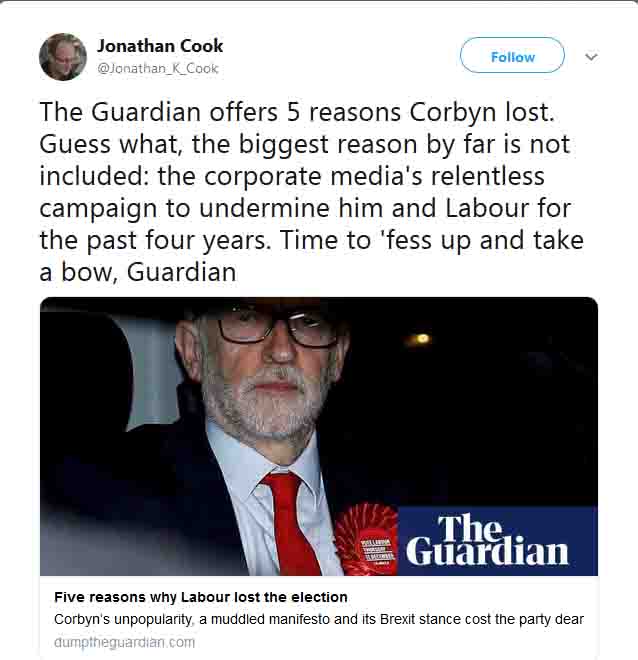 I guess all three of us need a stiff tot of rum to bring us to our senses.