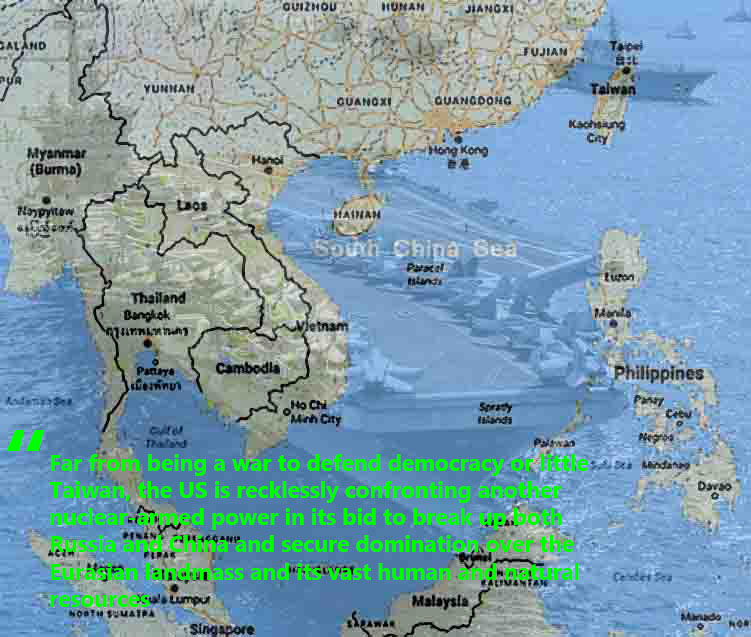 As if the Armageddon scenario it has spent decades provoking on Russia’s south-west border were insufficiently terrifying, a fading and by that fact triply dangerous US empire is stepping up its efforts to provoke China in Taiwan.

This is not good news.

Not for the 99.99% of humanity who – having nothing to gain from such a development, having done nothing to bring it about and having no billionaire bunkers should the worst materialise – can only watch in dismay.

Or stick their heads in the sand.

That last is understandable. Most of us feel utterly disempowered by four straight decades of no-such-thing-as-society neoliberalism. Yet so few of us look that disempowerment in the eye, and ask how it squares with “our democratic values”. This failure I attribute to ideology’s role 1 in normalising insanity and iniquity, and to the truth that human lives are for the most part lived in the concrete. The things that most get our attention are: first, those which directly impact on self and kin; second, those our systemically corrupt media and venally supine leaders want us to get worked up about.

And the things that least get our attention are: first, abstractions – however important; second, those our systemically corrupt media and venally supine leaders do not want us to get worked up about.

If it ain’t in the papers, it ain’t important. They’d say if it was, wouldn’t they?

Right now what’s in the papers – from tabloid to up-market, and from generalist to financial – is how awfully Russia and China are behaving.

And what’s not in the papers – any of them, which should tell you all you need to know about how well they serve us – is how desperately the West’s ruling elites, led by those in the USA, need to curb the economic challenge posed by Eurasia rising. Here (again) is how that works:

Why now though? My guess, for what it’s worth, is that the US ruling class is no longer seriously divided between those gunning for Russia, and those gunning for China. Rather, it is broadly united on two things. One, if ever there was any realistic prospect of driving a wedge between Beijing and Moscow (and that’s a big if) that ship has sailed. Two, with China growing stronger by the day, and a global south now wary of Washington’s misuse of dollar supremacy, 4 time is not on the side of the US empire.

So. As that US-led West turns the island of Taiwan into an arms dump for WW3, bury your head in the sand if you must – as I said, it’s an understandable reaction given our actual impotence as ‘free born Westerners’ – but please, do not suppose this has anything to do with liberating and protecting, with human rights or with any other of the fairy tales by which our rulers, amply aided by those corrupt and compliant media, always justify their criminal aggressions.

Time to hand over to WSWS, which for once drops its “neither US nor Chinese imperialism 5 but the international working class”  mantra, to offer an unerringly sober and accurate assessment of what is happening in the South China Sea.

And, insofar as its Trotskyist worldview allows this, of why it is happening. 6

Even as it intensifies its war against Russia in Ukraine, Washington is more and more openly and provocatively preparing for war with China over Taiwan. A New York Times (NYT) article last week entitled “US aims to turn Taiwan into giant weapons depot” reveals the extent of the military planning and preparations underway to transform Taiwan into a heavily-armed camp as the Biden administration goads Beijing into taking military action. 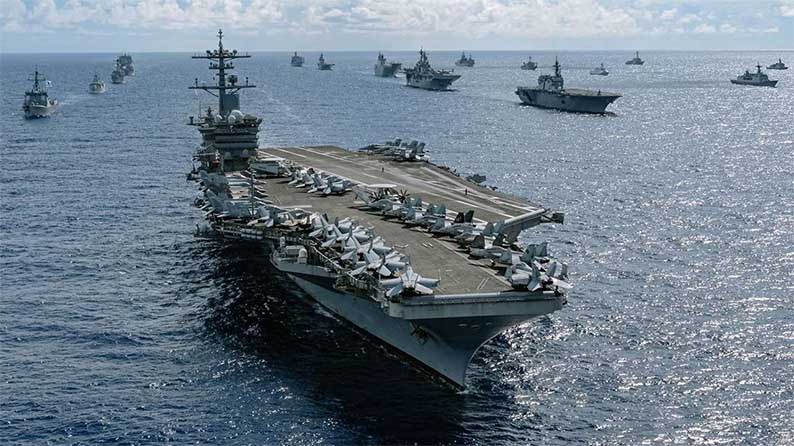 For 50 years, following President Nixon’s trip to China in 1972, tensions in the narrow Taiwan Strait between the island and the Chinese mainland have been minimised through the One China policy—the tacit recognition by Washington and virtually every other country that Beijing was the legitimate government of all China, including Taiwan. When formal diplomatic relations between the US and China were established in 1979, Washington ended its military and diplomatic ties with Taipei, and withdrew all military forces from the island.

Now the Biden administration, following Trump, is more and more blatantly calling the One China policy into question, knowing full well that any declaration of formal independence by Taipei would provoke war with China. Biden has emphatically declared on four occasions that the US is committed to joining Taiwan in any war with China, effectively ending the policy of “strategic ambiguity,” designed to keep both Beijing and Taipei guessing as to any American military involvement.

Citing current and former US officials, the New York Times article points to high-level discussions in the White House and the Pentagon aimed at transforming the island into a huge armed camp. “American officials are intensifying efforts to build a giant stockpile of weapons in Taiwan,” it states, “after studying recent naval and air force exercises by the Chinese military around the island.”

The conclusion being drawn in American strategic circles is that any Chinese military action to reunify Taiwan with the mainland would begin with a military blockade. “Officials say Taiwan needs to become a ‘porcupine’ with enough weapons to hold out if the Chinese military blockades and invades it, even if Washington decides to send troops,” the NYT declares.

Buoyed by the advances against Russian forces in US-orchestrated operations in Ukraine, Washington is seeking to replicate similar tactics in any war in Taiwan to inflict maximum losses on the Chinese military. The NYT explained: “US officials are determining the quantity and types of weapons sold to Taiwan by quietly telling Taiwanese officials and American arms makers that they will reject orders for some large systems in favour of a greater number of smaller, more mobile weapons.”

The NYT noted that “shoot-and-scoot” types of armaments, including shoulder-fired anti-tank and anti-aircraft missiles, along with mobile HIMARS rocket launchers, provided to the Ukrainian military, had inflicted major losses on Russian forces. US officials are telling Taiwan that more of those weapons should be ordered to transform the island into a “porcupine” bristling with armaments. In other words, as in Ukraine, the US is pushing for and arming Taiwan for a war fought on the island with complete indifference to the resulting death and destruction.

US imperialism aims to weaken and destabilise China, encourage separatist movements in Tibet, Xinjiang and elsewhere, and undermine the Chinese Communist Party regime. Far from being a war to defend democracy or little Taiwan, the US is recklessly confronting another nuclear-armed power in its bid to break up both Russia and China and secure domination over the Eurasian landmass and its vast human and natural resources.

Washington last month announced a sixth arms sale to Taiwan involving more than $1.1 billion worth of weapons—the largest so far under the Biden administration. Drew Thomson, a former Pentagon employee, told the NYT that while some arms sales have been greater, the latest is aimed at ensuring that Taiwan will have “a larger supply of war reserve munitions on hand in advance of a conflict.” The package includes 60 Harpoon coastal anti-ship missiles.

The Taiwan Policy Act that was approved by the US Senate Committee on Foreign Relations last month would authorise a further expansion of arms sales to Taiwan—to the tune of $6.5 billion over the five years to 2027. Significantly, the legislation would also declare Taiwan—nominally still regarded by Washington as part of China—to be a non-NATO ally of the US, effectively ending the One China policy. The Act still has to pass Congress and receive presidential approval.

Commenting last week, the NYT voiced the concerns in US military circles that supplies to Taiwan could be held up given Washington has prioritised sending weapons to Ukraine. It noted that “arms makers are reluctant to open new production lines without a steady stream of long-term orders.” The very fact that the issue is under discussion signifies that an expansion of arms production is already being considered as the war in Ukraine expands and the US continues to provoke conflict over Taiwan.

The NYT article indicated that Washington was already considering how to speed up military supplies to Taiwan. Last week, a US State Department official was to address the annual US-Taiwan Defense Industry Conference—a three-day event held behind closed doors. Laura Cressey, director of the bureau overseeing arms sales to Taiwan, was joined by her counterpart in the US Defence Department.

The event underscored the escalation of high-level discussions between US and Taiwanese officials following the provocative visit to the island by US House Speaker Nancy Pelosi in August. A delegation from Taiwan to the defence industry conference was headed by the Deputy Minister of National Defense Wang Shin-lung. Biden, following Trump, has torn up longstanding diplomatic protocols under the One China policy that limited official contact between Taiwan and the US.

Washington is not only conducting a huge arms build-up on Taiwan, but is also considering how to ferry military supplies to the island in the event of war and a Chinese blockade. Defence consultant Eric Wertheim told the NYT: “The sheer amount of materiel that would likely be needed in case of war is formidable, and getting them through would be difficult, though may be doable.”

However, any US attempt to breach a blockade threatens a direct clash between the United States and China with the potential to escalate into a war that would quickly involve US bases and allies throughout the region, including Japan, South Korea and Australia. Wertheim continued: “The question is: How much risk is China and the White House willing to take in terms of enforcing or breaking through a blockade, respectively, and can it be sustained?”

The Biden administration has already answered the question in deeds, if not in words. Even as it is recklessly plunging the world towards nuclear war in Europe, the US is deliberating inflaming tensions with China over Taiwan—arguably the most dangerous flashpoint in Asia. The escalating arms sales are just one of the many indications that the US is determined to prevent China challenging American global hegemony by every means, whatever the cost to humanity.