Yesterday my pal at Sheffield Hallam – a fellow Yorkshireman whose wife is Russian and who’d already alerted me to Aaron Maté on the Jimmy Dore Show, as featured in Peace in Ukraine? – sent me a link to a six thousand worder by one Jaques Baud. M. Baud’s qualifications for writing on the military situation in Ukraine are – unlike those of corporate journalists reduced, whether they know it or not, to telling us what Washington and Nato want us to believe – impressive:

Jacques Baud is a former colonel of the General Staff, ex-member of the Swiss strategic intelligence, specialist on Eastern countries. He was trained in the American and British intelligence services. He has served as Policy Chief for UN Peace Operations. As a UN expert on rule of law and security institutions, he designed and led the first multidimensional UN intelligence unit in the Sudan. He has worked for the African Union and was for 5 years responsible for the fight, at NATO, against the proliferation of small arms. He was involved in discussions with the highest Russian military and intelligence officials just after the fall of the USSR. Within NATO, he followed the 2014 Ukrainian crisis and later participated in programs to assist the Ukraine. He is the author of several books on intelligence, war and terrorism, in particular Le Détournement published by SIGEST, Gouverner par les fake news, L’affaire Navalny. His latest book is Poutine, maître du jeu? published by Max Milo.

What this flags loud and clear to me is that M. Baud is another gamekeeper turned poacher – like Alastair Crooke, Craig Murray, Paul Craig Roberts and scores of other former establishment figures with the integrity to be nauseated by a US-led West desperately seeking to preserve its global rule in the face of Eurasia Rising. But this profile leaves out the fact of M. Baud being that rare thing, a gifted communicator – his English better than the average Brit’s 1 – who presents exceptional detail without losing the big picture. From the macro level of Nato intent and Russia’s responses, to the micro detail of what did  happen at that Mariupol hospital, and of …

.. Russian forces … in the ‘cauldron’ between Slavyansk, Kramatorsk and Severodonetsk, with a thrust from the East through Kharkov and another from the South from Crimea …

… this is not only writing of rare intelligence (in both senses of the word) by a peacemaker who knows the military inside out. It is also a gripping read.

Two final remarks before I hand over. Weeks ago I bought this A1 laminated map of Ukraine: bigger than I strictly needed, given the relative lack of detail, but I’m glad I didn’t go smaller. (They also do A2 and A0 but A1 works for me.) I have it blue-tacked to an area of wall behind me. When I read online of a place – Mariupol, say, or the nuclear plant at Zaporizhyzhya – I simply swivel my steel city chair 180. Even with the eyesight not what it was, I can locate the hot spot at a metre’s distance with consummate ease and no unpleasant stress to knee and torso.

But however you fix it, get yourself a map. 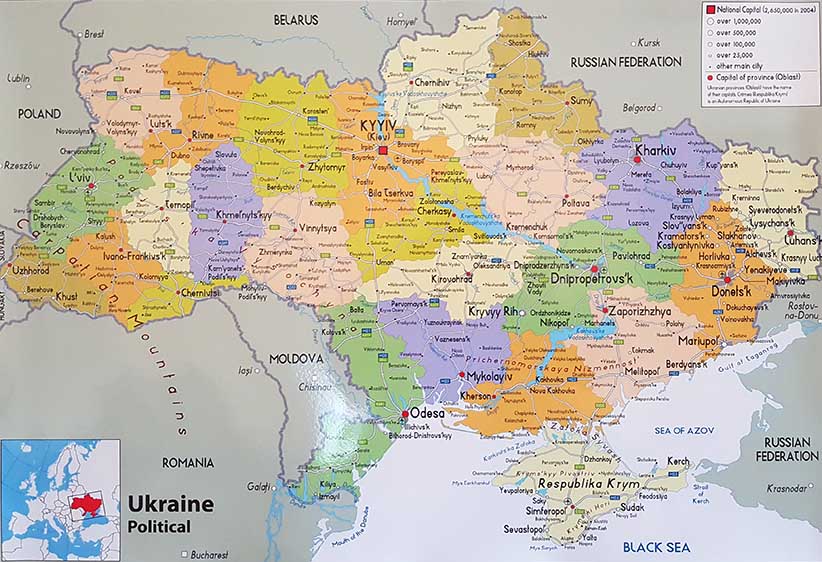 Second, my Gallic friend Alain emailed to say that Frontline Ukraine, featured in yesterday’s post and now only available from Amazon as a hardback, can be had in e-format after all. I haven’t tested the actual purchase mechanism, since I already have the book on my Kindle, but here’s the link.

The Military Situation In The Ukraine

Part One: The Road To War

For years, from Mali to Afghanistan, I have worked for peace and risked my life for it. It is therefore not a question of justifying war, but of understanding what led us to it. I notice that the “experts” who take turns on television analyze the situation on the basis of dubious information, most often hypotheses erected as facts—and then we no longer manage to understand what is happening. This is how panics are created.

The problem is not so much to know who is right in this conflict, but to question the way our leaders make their decisions.

Let’s try to examine the roots of the conflict. It starts with those who for the last eight years have been talking about “separatists” or “independentists” from Donbass. This is not true. The referendums conducted by the two self-proclaimed Republics of Donetsk and Lugansk in May 2014, were not referendums of “independence” (независимость), as some unscrupulous journalists have claimed, but referendums of “self-determination” or “autonomy” (самостоятельность). The qualifier “pro-Russian” suggests that Russia was a party to the conflict, which was not the case, and the term “Russian speakers” would have been more honest. Moreover, these referendums were conducted against the advice of Vladimir Putin.

In fact, these Republics were not seeking to separate from Ukraine, but to have a status of autonomy, guaranteeing them the use of the Russian language as an official language. For the first legislative act of the new government resulting from the overthrow of President Yanukovych, was the abolition, on February 23, 2014, of the Kivalov-Kolesnichenko law of 2012 that made Russian an official language. A bit like if putschists decided that French and Italian would no longer be official languages in Switzerland.

This decision caused a storm in the Russian-speaking population. The result was a fierce repression against the Russian-speaking regions (Odessa, Dnepropetrovsk, Kharkov, Lugansk and Donetsk) which was carried out beginning in February 2014 and led to a militarization of the situation and some massacres (in Odessa and Marioupol, for the most notable). At the end of summer 2014, only the self-proclaimed Republics of Donetsk and Lugansk remained.

At this stage, too rigid and engrossed in a doctrinaire approach to the art of operations, the Ukrainian general staff subdued the enemy without managing to prevail. The examination of the course of the fighting in 2014-2016 in the Donbass shows that the Ukrainian general staff systematically and mechanically applied the same operative schemes. However, the war waged by the autonomists was very similar to what we observed in the Sahel: 2 highly mobile operations conducted with light means. With a more flexible and less doctrinaire approach, the rebels were able to exploit the inertia of Ukrainian forces to repeatedly “trap” them.

In 2014, when I was at NATO, I was responsible for the fight against the proliferation of small arms, and we were trying to detect Russian arms deliveries to the rebels, to see if Moscow was involved. The information we received then came almost entirely from Polish intelligence services and did not “fit” with the information coming from the OSCE [Organisation for Security and Co-operation in Europe]—despite rather crude allegations, there were no deliveries of weapons and military equipment from Russia.

The rebels were armed thanks to the defection of Russian-speaking Ukrainian units that went over to the rebel side. As Ukrainian failures continued, tank, artillery and anti-aircraft battalions swelled the ranks of the autonomists. This is what pushed the Ukrainians to commit to the Minsk Agreements.

But just after signing the Minsk 1 Agreements, the Ukrainian President Petro Poroshenko launched a massive anti-terrorist operation (ATO/Антитерористична операція) against the Donbass. Bis repetita placent: poorly advised by NATO officers, the Ukrainians suffered a crushing defeat in Debaltsevo, which forced them to engage in the Minsk 2 Agreements.

It is essential to recall here that Minsk 1 (September 2014) and Minsk 2 (February 2015) Agreements did not provide for the separation or independence of the Republics, but their autonomy within the framework of Ukraine. Those who have read the Agreements (there are very, very, very few of those who actually have) will note that it is written in all letters that the status of the Republics was to be negotiated between Kiev and the representatives of the Republics, for an internal solution to the Ukraine.

That is why since 2014, Russia has systematically demanded their implementation while refusing to be a party to the negotiations, because it was an internal matter of the Ukraine. On the other side, the West—led by France—systematically tried to replace the Minsk Agreements with the “Normandy format,” which put Russians and Ukrainians face-to-face. However, let us remember that there were never any Russian troops in the Donbass before 23-24 February 2022. Moreover, OSCE observers have never observed the slightest trace of Russian units operating in the Donbass. For example, the U.S. intelligence map published by the Washington Post on December 3, 2021 does not show Russian troops in the Donbass.

In October 2015, Vasyl Hrytsak, director of the Ukrainian Security Service (SBU), confessed that only 56 Russian fighters had been observed in the Donbass. This was exactly comparable to the Swiss who went to fight in Bosnia on weekends, in the 1990s, or the French who go to fight in the Ukraine today.

The Ukrainian army was then in a deplorable state. In October 2018, after four years of war, the chief Ukrainian military prosecutor, Anatoly Matios, stated that Ukraine had lost 2,700 men in the Donbass: 891 from illnesses, 318 from road accidents, 177 from other accidents, 175 from poisonings (alcohol, drugs), 172 from careless handling of weapons, 101 from breaches of security regulations, 228 from murders and 615 from suicides.

In fact, the army was undermined by the corruption of its cadres and no longer enjoyed the support of the population. According to a British Home Office report, in the March/April 2014 recall of reservists, 70 percent did not show up for the first session, 80 percent for the second, 90 percent for the third, and 95 percent for the fourth. In October/November 2017, 70% of conscripts did not show up for the “Fall 2017” recall campaign. This is not counting suicides and desertions (often over to the autonomists), which reached up to 30 percent of the workforce in the ATO area. Young Ukrainians refused to go and fight in the Donbass and preferred emigration, which also explains, at least partially, the demographic deficit of the country.

The Ukrainian Ministry of Defense then turned to NATO to help make its armed forces more “attractive.” Having already worked on similar projects within the framework of the United Nations, I was asked by NATO to participate in a program to restore the image of the Ukrainian armed forces. But this is a long-term process and the Ukrainians wanted to move quickly.

So, to compensate for the lack of soldiers, the Ukrainian government resorted to paramilitary militias. They are essentially composed of foreign mercenaries, often extreme right-wing militants. In 2020, they constituted about 40 percent of the Ukrainian forces and numbered about 102,000 men, according to Reuters. They were armed, financed and trained by the United States, Great Britain, Canada and France. There were more than 19 nationalities—including Swiss.

Western countries have thus clearly created and supported Ukrainian far-right militias. In October 2021, the Jerusalem Post sounded the alarm by denouncing the Centuria project. These militias had been operating in the Donbass since 2014, with Western support. Even if one can argue about the term “Nazi,” the fact remains that these militias are violent, convey a nauseating ideology and are virulently anti-Semitic. Their anti-Semitism is more cultural than political, which is why the term “Nazi” is not really appropriate. Their hatred of the Jew stems from the great famines of the 1920s and 1930s in the Ukraine, resulting from Stalin’s confiscation of crops to finance the modernization of the Red Army. This genocide—known in the Ukraine as the Holodomor—was perpetrated by the NKVD (forerunner of the KGB), whose upper echelons of leadership were mainly composed of Jews. This is why, today, Ukrainian extremists are asking Israel to apologize for the crimes of communism, as the Jerusalem Post notes. This is a far cry from Vladimir Putin’s “rewriting of history” …

23 Replies to “Ukraine: a military assessment”