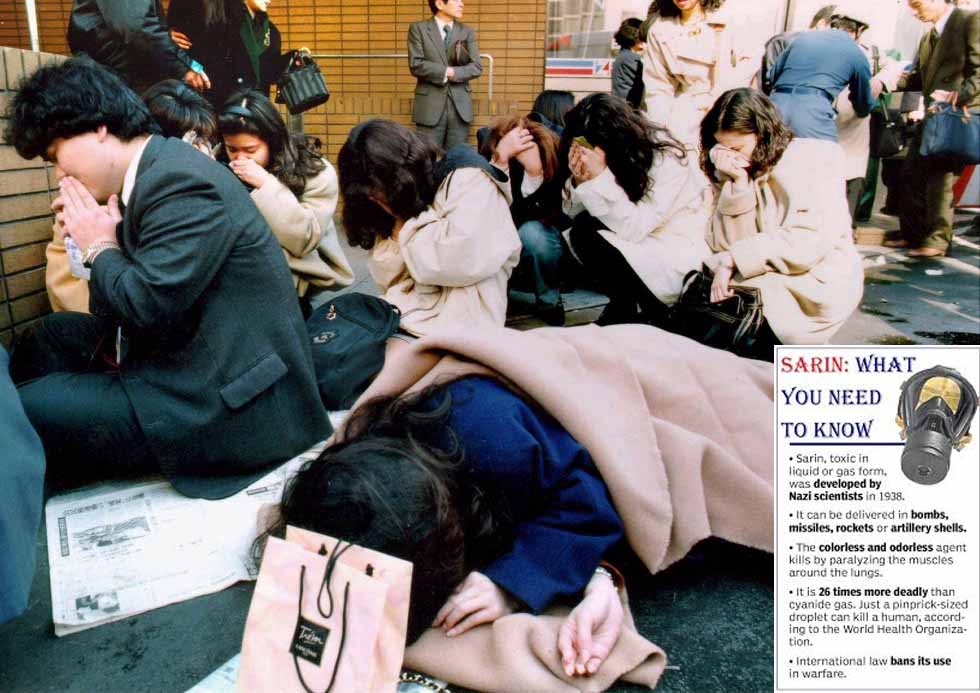 The exchange below took place a few days ago, below the line of an OffGuardian piece on the corruption of the UN’s Organisation for the Prohibition of Chemical Weapons (OPCW) as shown in its handling of last year’s Douma incident.

Louis Proyect is one of many on the marxist left – up there with Workers Power – I deem dead wrong on Syria. He professes bafflement that marxists could defend evil Assad. Me, I’m baffled that any marxist could buy, on such negligible evidential basis, the demonising of a third world leader who stands in the way of Western imperialist powers with multiple motives (oil pipeline, privatisation, Golan theft, hurting Iran and Russia) for crushing Ba’athism – and with a record as long as your arm of lying at every turn as to the why of it. 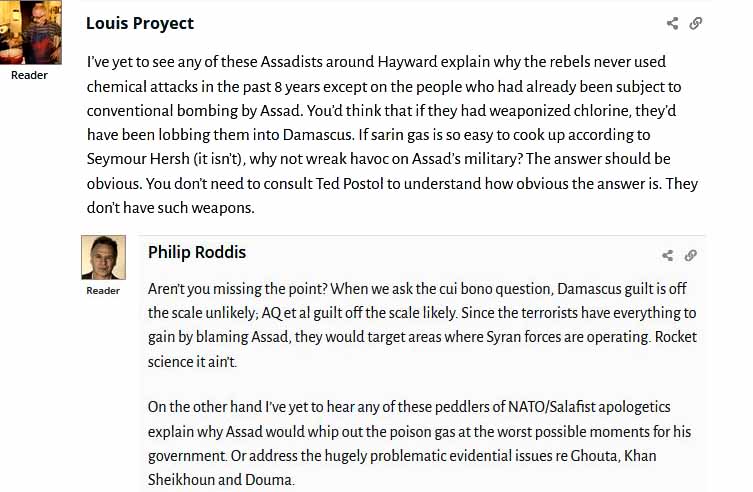 It wasn’t the first time I’ve engaged Proyect, and had already noted his use of ad hominems and specious argument. (In an OffGuardian comment on a piece on Greece’s plight four years ago, he cited the fact that the fascist Golden Dawn backed greater trade with Russia to discredit Syriza, which had an overlapping view on that matter. That’s like decrying vegetarians on the ground Hitler was one.) But Louis Proyect’s most infamous comment to date had escaped me till Piers Robinson alerted me to it when I first posted this. Why would a man calling himself a marxist and often published in CounterPunch describe Vanessa Beeley, one of the best known reporters challenging official narratives on Assad, as “too ugly to fuck”?

Search me, but he assuredly did. 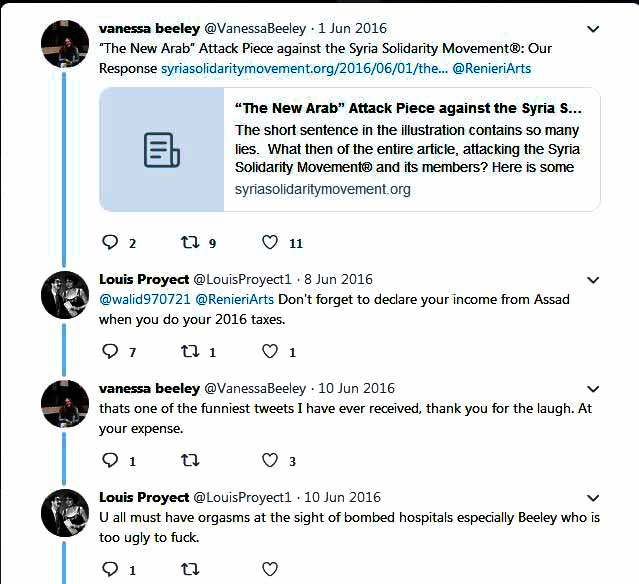 Moving on, Proyect claims – I’ve heard the Guardian’s George Monbiot do the same – that sarin is hard to manufacture; certainly beyond the capacity of Islamist groups working to bring down Assad. Since neither Proyect not Monbiot are experts, I’ll turn to those who are.

Let none accuse me of cherry picking. This piece, from Wired two years ago, is vehemently of the view that Assad does have sarin, and does use it.

[Sarin] is not especially hard to produce, in terms of both resources and expertise. “A competent chemist could make it, and possibly very quickly, in a matter of days,” says John Gilbert, a senior science fellow at the Center for Arms Control and Non-Proliferation, who spent much of his Air Force career assessing countries’ WMD capabilities. Producing sarin doesn’t require any kind of massive facility; a roughly 200 square foot room would do.

Author Brian Barrett, eager to make the case that Damascus could have rebuilt sarin stockpiles after the OPCW oversaw their destruction in 2014, inadvertently blows Proyect’s and Monbiot’s argument clean out of the water!

We should also note the Tokyo subway attack of March 20, 1995. Perps? Aum Shinrikyo, a bunch of doomsday wingnuts originating as a yoga and meditation group devoted to a mishmash of deities with Hinduism’s Shiva – the destroyer – in overall charge and channelling through head wacko Shoko Asahara. Says wiki:

Tsuchiya [a member] had established a small laboratory in Kamikuishiki in 1992. After initial research (at Tsukuba University, where he had studied chemistry) he suggested to Hideo Murai – a senior Aum advisor who had tasked him with researching chemical weapons, out of fear the cult would soon be attacked with them – that the most cost-effective substance to synthesise would be sarin.

He was ordered to produce a small amount – within a month, the necessary equipment had been ordered and installed, and 10-20g of sarin produced via synthetic procedures derived from the five-step DHMP process as originally described by IG Farben in 1938, and as used by the Allies after World War II.

Murai then ordered Tsuchiya to produce 70 tons. When Tsuchiya protested that this was not feasible in a research laboratory, a chemical plant was ordered to be built alongside the biological production facility in the Fujigamine district of Kamikuishiki, to be labelled Satyan-7 (‘Truth’). The equipment and substantial chemicals were purchased using shell companies under Hasegawa Chemical, already owned by Aum. At the same time, in 1993, cult members travelled to Australia, bringing generators, tools, protective equipment (including gas masks and respirators), and chemicals to make sarin.

Are we seriously to suppose that ‘moderate Islamists’ operating in Syria with barely hidden aid from Israel, Saudi Arabia, Turkey and – not least through the likes of White Helmets – the West are less resourceful than this bunch of millennial crazies?

It amazes me, perhaps because I still deem them deluded but sincere, that so many fail to see that on Syria, and much besides, we are being lied to on a monumental scale and will continue to be lied to until we wake up and demand the truth.