On Saturday, President Elect Trump made a call to the Taiwanese Premier, breaching protocols in place since Nixon’s 1972 visit to Beijing. FB and Twitter have been abuzz with accusations of ineptitude or – the Donald allegedly having business designs on the island – venality. Either or both may be true but there’s a darker possibility. What if Trump has a green light from elements within the ‘deep state’ – aka  the true executive arm of America’s ruling class – to open up a new cold war on China?

I’ve no evidence either way but do consider jibes at Donald the Dunce wide of the mark. More to the point, there’s good reason for saying – as I did pace  Pepe Escobar in September and as John Pilger did the day before Trump’s Taiwan call – that sooner or later America will go for China’s throat. The material conflicts are too great, and if we’ve learned only one thing this past two decades it’s how easily our rulers can get us to support or at any rate accept wars for profit and imperial dominance dressed up as “just” or “humanitarian”.

This post isn’t about China, though. It’s not even about war, at least not directly. It’s about what Chomsky has dubbed the manufacture of consent and, more specifically, a new moral panic on ‘fake news’. Bear with me though – it’ll take me most of the post to get there …

By any objective measure – invasions since WW2 .. actual use of nuclear weapons .. refusal to forgo first-strike use of same .. eastward expansion of NATO .. $10 trillion for-profit arms sector ($596 billion a year)  .. military bases across the globe .. covert regime change .. overt regime change and terror – the USA is far and away the world’s most dangerous nation.

Why then do so few of us see America for the threat to peace it self evidently is? One reason is that the west in general, its anglo-saxon quarter in particular, has long ceded independence in foreign policy in return for favoured status in Washington. But another, every bit as important, is a soft power aided by English as global lingua franca – courtesy the world’s previous largest empire – to enable US dominance in news and entertainment.

Baby boomers and all subsequent generations have been nurtured since infancy on a cultural diet of Americans putting the world to rights on our screens. Driven by what’s Right and Good and Wholesome, these celluloid heroes are on call night and day to set aside their peace loving natures and reluctantly take up arms against what’s Wrong and Bad and Rotten. When America fights – and here the worlds of fiction and edited history elide – it is only for the purest motives.

Let no one underestimate the power of a subliminal message – actually two: its corollary being fear of The Other, with devious Vlad and fanatical Ali currently heading the list – playing out in Theme & Variations over decades. Even we whose heads tell us it’s a big fat fib – our cerebral analyses fingering an America altogether more rapacious than that blessed homeland of Fonda and Wayne, Eastwood, Cruise and Willis – are not immune. Like Jesuits turned atheist we decry Amerika to hell and back but deep down cannot rid ourselves of a stubbornly residual suspicion that, for all its crimes, the US of A. has a heart that still beats to the rhythms of Captain Marvel.

(And maybe it does at that. I use the term America as shorthand. I do not for a moment mean its people. I mean its ruling class, the most powerful – hence most dangerous – on the planet.)

Of course, cultural hegemony does not rest solely on shared anglo-saxon values and spread of spoken English. Equally vital were the push/pull factors of cold war and postwar boom, both underpinned by Bretton Woods. That and the sheer size of the American economy brought unprecedented prosperity and welfare provision to a handful of privileged nations collectively known as the western world. This too was vital. Superman clearing the streets of crime could never have delivered the same feel-good, viewed in a damp slum on an empty belly. Our slice of American Pie was not baked on ideology alone.

Now it all looks very different. For tens of millions across America and Europe, a dream rooted in Keynes and cold war concession is over. Enter the age of beggars and food banks, private jails, zero hour precarity and spiralling inequality; an age of freedoms and privacies, gained over centuries of struggle, systematically removed in the name of a war on terror. While Chomsky’s ‘manufactured consent’ assumes rule by naked force to be off limits in the west, Paul Mason reminded us yesterday that this assumption could dissolve with dizzying speed.

“We asked for signs”, growled the late great Leonard Cohen. “The signs were sent.” In the main they found shape in seismic shocks for politics as usual. Scotland’s near-Yes was a sign, Brexit too. Syriza, Podemos, Die Linke, Corbyn and Sanders – that last a Jewish self avowed socialist who, but for Democrat corruption, would likely be the next US President – these too are signs, ditto the upsurge in rightwing populism a la Farage, Le Pen and Trump, and outright fascism in Eastern Europe. As in the twenties and thirties, Market failure to map wealth creation to human need has unleashed forces difficult, perhaps impossible, to control. This at a time of intensified imperial rivalry and, we can assume, divisions within  America’s and other ruling elites.

But unlike the twenties and thirties – now we get to the point – ours is also the age of blog, FB and Twitter; the age too of easy access to media across the planet, including those hostile to a world order that suits the few at the expense of the many, and those presenting the viewpoints of states demonised by ‘our’ media. With Sputnik and Off-Guardian as easily accessed as New York Times and Guardian, fear and loathing, voiced of course as grave concern for Truth and Impartiality, can be discerned in those whose oligopoly media ownership is under challenge as never before, and with it their gatekeeper role and ability to manufacture consent by setting the framework for dominant discourse. On Syria and Brexit, leadership of the British Labour Party and the US presidential elections, we have seen resistance, here hesitant, there unequivocal, to mainstream media narratives. It goes without saying – almost – that in no arena is the threat of shrinking receptivity to its narratives more unsettling to a ruling class than that of preparing us, its subjects, for war: pre conditions for such preparation being our believing that its interests are the nation’s (see this post on Trident) and that ‘national interest’ overrides class division.

The day after Trump dialled Taiwan to consternation in Beiijing, From Our Own Correspondent – one of BBC radio’s better current affairs offerings – ran a piece on The Fake News Factories of Macedonia (click here, hit play, drag the slider to 12:20). That got my attention for two reasons. One was a Facebook exchange the day before, after I’d commented, on a Trump trashing post, that we can draw a modicum of solace from the disruption to Clinton’s plans for Syria. 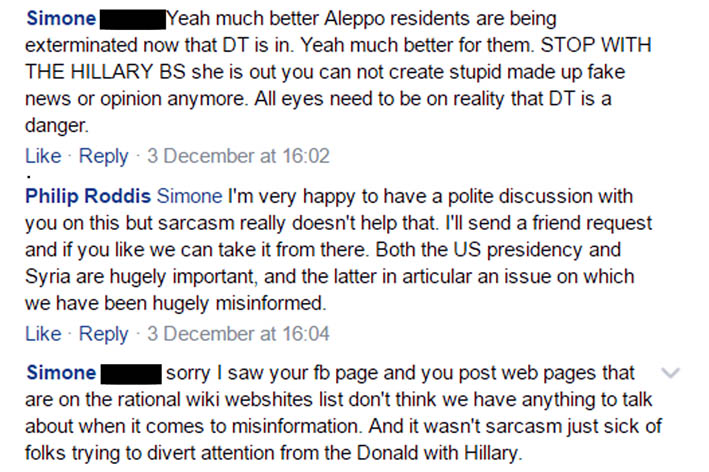 For now I’m not concerned with the abusive tone, common in my experience when ‘liberals’ take criticism of Clinton as defence of Trump, nor with the denial of sarcasm when that was the kindest reading of what Simone had written about Aleppo. Nor am I interested here – though I’ve marked it for future attention – in the smoke’n mirrors credulity of invoking self appointed rational wiki as arbiter of truth, bypassing any need for further inquiry. My concern is with the sudden and very recent arrival of the ‘fake news’ meme. Why now?

Which brings me to the second reason that BBC radio feature got my attention. You’ll have realised I’m sure that neither Simone nor the Beeb are the main flag bearers here. And that while Guardian and Independent are certainly in for the ride, the war on ‘fake news’ is led by bigger players; those billionaire barons who supply the stuff on an industrial scale. It should be laughable but isn’t. On which note I’ll finish but, since you’ve stayed with me this far, do take another two minutes now to watch a magnificent Anissa Naouai rip into this crusade for the hypocritical and desperate baloney it truly is. Are the media moguls losing their grip?