“Ba’athism promotes a unified Arab state through the leadership of a vanguard party over a revolutionary government and the creation of one-party states, and rejects political pluralism …  it is a secular ideology that supports socialist economics to a varying degree, and public ownership over the heights of the economy … Ba’athists believe socialism is the only way to develop an Arab society which is truly free and united.” wiki entry

Washington has told the world of its cast iron certainty that Syrian forces used sarin at Idlib. Well it would, wouldn’t it? It was never going to say it fired fifty-nine Tomahawks at Homs because Assad’s eyes are too close together. Still less that, Russia be damned, its plans – which predate Daraa 2011 – to rid the region of its sole surviving Ba’athist government far outweigh niceties of guilt and innocence, truth and fabrication. Ignoring the elected status of that government and referring to it unwaveringly as a regime  is one small but telling detail, in a narrative driven by claims repeated till they acquire the status of truths only the deluded contest, by which consent is manufactured in the west for its wars on the middle east and beyond.

Speaking of the west, Washington ‘certainty’ is dutifully echoed in London, Paris and other regimes committed to war, cold for now, on Russia – and continuing control by proxy, by destabilisation and/or by Balkanisation of the middle east. That our rulers can still get away with this after all that’s happened since 2003 is eloquent testament to our credulity and the carte blanche we give them overseas.

‘I’m guided by the beauty of our weapons.’ Leonard Cohen 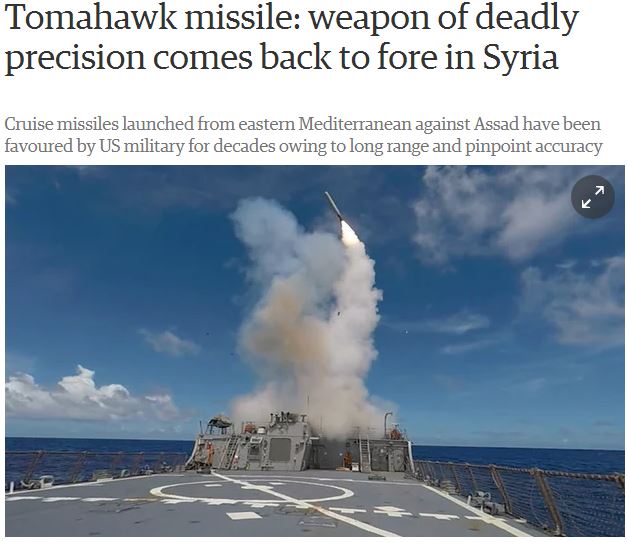 This gushing piece by Elle Hunt, every word echoing the PR-speak of America’s $10 trn for-profit arms sector, speaks volumes on independence lost. Yet again Washington, to cheers in London, shows utter contempt for international law. Yet again the Guardian forgets the duty implied in its name: holding the powerful to account. Worse, it plays to a leitmotif of orientalist demonising: Good Guys with ‘surgically’ precise weaponry versus Bad Guys and their indiscriminate butchery.

Hence to the dismaying ease with which a state displeasing Wall Street (metonym for western capital) can be so vilified that many on the left – with Monbiot of the 99% certainty a case in point – fail in that most elementary of internationalist duties: defending such a state from the aggression of their own imperialisms.

But let’s set aside claims of certainty; whether of the one hundred or merely ninety-nine percent kind. They have no objective value and can be likened to the way religious believers ‘know’ God exists. What is being voiced is not knowledge in any epistemological or jurisprudential sense of the word. Rather, what is being voiced – in good faith or bad, or likely as not that self-serving blend of the two our species excels at – is a belief.  How can I say this with such confidence of my own? Because it’s a fundamental of justice that we presume innocence until guilt is proved, and guilt has not been proved. Worse yet, the accuser in chief has at best done nothing to initiate and at worst actively blocked impartial investigation of the claims against Damascus.

The entire US operation in Iraq and Syria is not being investigated properly. How can you liberate people from oppression when you are killing them by the thousands? But every request for an investigation, including the event in Idlib, is being completely ignored by a UN that is cowed by US pressure. Daniel McAdams, Executive Director, Ron Paul Institute

In fact the starkest certainty about Idlib is that we can’t know who released sarin on April 4. You don’t know. I don’t. George doesn’t. My strong sense is it wasn’t Assad. If I overstated this in a recent post putting the odds at a modest three million to one, I trust sensible readers to detect a modicum of tongue-in. Let me put it more safely: (a) we don’t know Damascus used sarin at Idlib (or Ghouta, 2013); (b) we don’t know it did not; (c) despite The Guardian’s putative motive (offered, with unsubstantiated claims of faltering progress by the Syrian Army, as an inset to a piece on the French ‘evidence’) it is more likely, on grounds of motive and risk of embarrassing Moscow, that it did not.

So what do  we know? Quite a lot, actually. These things for instance:

In a future post I’ll focus on univeralism, a principle invoked by two broad left figures, George Monbiot and Owen Jones, to justify positions which, while not overtly endorsing imperialist narratives on demonised states, have the doubtless unintended effect of aiding and abetting them.

8 Replies to “Syria: what we know and what we don’t”