Am I obsessed by Syria? I see egregious injustice done in our name to its people. I see risk of escalation in America’s refusal to leave a country it, unlike Russia, has not been invited into. I see corporate media united in pairing an overegged case against Assad’s elected government with refusal to question a regime-change rationale so insultingly thin it can only be maintained by volume, daily repetition and no-platforming of dissent. It’s worse than anything in decades. Worse than Iraq and Libya. Worse even than cold war propaganda in the Reagan years, when dissenting views were at least heard from time to time in the mainstream.

The propagandists absolutely include liberal media. Sadly – and I speak as one accused in the past of excessive leniency on these men – this tarnishes the reputations of voices on the liberal left, such as Owen Jones, Paul Mason and George Monbiot. Each scorns experts – former UN weapons inspector Ted Postol, religious leader Mother Agnes and journalist John Pilger to name a few, not to forget millions of Syrians voting for Assad in 2014 – who query a manifestly pro imperialist narrative. Yes, Monbiot et al are entitled to their opinions, dubious of premise and strident in tone though they might be. But not speaking out on their employer’s failure to allow a single column inch for dissent? That ain’t right.

On this last, see today’s OffGuardian re unanswered requests that the Graun give three British professors and Syria based journalist Vanessa Beeley, slated in the piece, right of reply to Olivia Solon’s extraordinary attack last month – a fact-lite hatchet job my one time Workers Power comrade Paul Mason called forensic1 – on all who dare to ask whether the White Helmets are entirely what they seem. 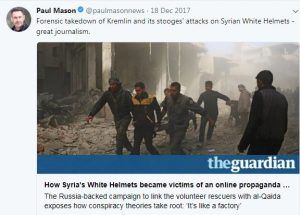 With these thoughts in mind, I commend this piece by Jonathan Cook, posted on his Blog from Nazareth yesterday.

Monbiot is not only a hypocrite, but a bully too

It is time for George Monbiot’s legion of supporters to call him out. Not only is he a hypocrite, but he is becoming an increasingly dangerous one.

Turning a blind eye to his behaviour, or worse excusing it, as too often happens, has only encouraged him to intensify his attacks on dissident writers, those who – whether right or wrong on any specific issue – are slowly helping us all to develop more critical perspectives on western foreign policy goals than has ever been possible before.

I do not lightly use such strong language against Monbiot, someone I once admired. But his column this week drips with hypocrisy as he accuses the rightwing media of being the real villains when it comes to “no-platforming”. Monbiot writes:

I believe that a healthy media organisation, like a healthy university, should admit a diversity of opinion. I want the other newspapers to keep publishing views with which I fiercely disagree. But they – and we – should also seek opposing views and publish them too, however uncomfortable this might be.

What free speech advocate would disagree with that. Except it is Monbiot himself who has been using his prominent platforms, at the Guardian and on social media, to discredit critical thinkers on the left – not with reasoned arguments, but by impugning their integrity.

It started with his unsubstantiated claim that scholars like Noam Chomsky and the late Ed Herman, as well as the acclaimed journalist John Pilger, were “genocide deniers and belittlers”. It now focuses on childish insinuations that those who question the corporate media’s simplistic narrative on Syria are Assad apologists or in Vladimir Putin’s pay.

But worse than this, Monbiot is also conspiring – either actively or through his silence – to deny critics of his and the Guardian’s position on Syria the chance to set out their evidence in its pages.

The Guardian’s anti-democratic stance does not surprise me, as someone who worked there for many years. I found myself repeatedly no-platformed by the paper – even while on its staff – after I started taking an interest in the Israel-Palestine conflict and writing about the discomforting issue of what a Jewish state entails. My treatment is far from unique.

Now the paper is denying a platform to those who question simplistic and self-serving western narratives on Syria. And Monbiot is backing his employer to the hilt, even as he professes his commitment to the publication of views he fiercely disagrees with. That’s the dictionary definition of hypocrisy.

The latest instalment of the Guardian and Monbiot’s long-running battle to silence Syria dissidents arrived last month when Olivia Solon, the paper’s technology writer living in San Francisco, developed a sudden and unexpected expertise in a controversial Syrian group called the White Helmets.

In the western corporate media narrative, the White Helmets are a group of dedicated and selfless rescue workers. They are supposedly the humanitarians on whose behalf a western intervention in Syria would have been justified – before, that is, Syrian leader Bashar Assad queered their pitch by inviting in Russia.

However, there are problems with the White Helmets. They operate only in rebel – read: mainly al-Qaeda and ISIS-held – areas of Syria, and plenty of evidence shows that they are funded by the UK and US to advance both countries’ far-from-humanitarian policy objectives in Syria.

There are also strong indications that members of the White Helmets have been involved in war crimes, and that they have staged rescue operations as a part of a propaganda offensive designed to assist Islamic extremists trying to oust Assad. (Solon discounts this last claim. In doing so, she ignores several examples of such behaviour, concentrating instead on an improbable “mannequin challenge”, when the White Helmets supposedly froze their emergency operations, in the midst of rescue efforts, apparently as part of a peculiar publicity campaign.)

Whatever side one takes in this debate, one would imagine that Monbiot should have a clear agenda in support of hearing evidence from all sides. One might also imagine that he would want to distance himself from Solon’s efforts to tie criticism of the White Helmets to a supposed “fake news” crisis and paint those critical of the group as Putin-bots. According to Solon:

The way the Russian propaganda machine has targeted the White Helmets is a neat case study in the prevailing information wars. It exposes just how rumours, conspiracy theories and half-truths bubble to the top of YouTube, Google and Twitter search algorithms.

Those are the same algorithms that have been changed in recent months to make sure that prominent leftist websites are increasingly difficult to find on internet searches and their writers’ views effectively disappeared.

Yet Monbiot has been using social media to promote Solon’s cheerleading of the White Helmets and her hatchet job against on-the-ground journalists who have taken a far more critical view of the group.

As set out by Prof Tim Hayward, the Guardian’s response to criticism of Solon’s piece has been typical. The comments section below the article was hastily closed after many criticisms were voiced by readers. The journalists who were singled out for attack by Solon were denied a right of reply. A group of concerned academics led by Hayward who submitted their own article, which detailed publicly available evidence to counter Solon’s simplistic account of the White Helmets, were ignored. Meanwhile, the Guardian’s editors and the reader’s editor have ignored all efforts by these parties to contact them.

Given his claim to be an uncompromising defender of free speech and a fierce advocate of providing platforms to those who can back up their arguments with evidence, however discomforting, one might have assumed that Monbiot would at the very least have lobbied on behalf of Hayward and his fellow scholars. But not a bit of it. Yet again he has joined the dogs of the corporate media baying for blood. Instead he turned to Twitter to claim Hayward and Piers Robinson, an expert on propaganda, had “disgraced” themselves.

The many tens of thousands of leftists who defend Monbiot, or turn a blind eye to his hypocrisy, largely do so because of his record on the environment. But in practice they are enabling not only his increasingly overt incitement against critical thinkers, but also undermining the very cause his supporters believe he champions.

Climate breakdown is a global concern. Rewilding, bike-riding, protecting bees and polar bears, and developing new sustainable technologies are all vitally important. But such actions will amount to little if we fail to turn a highly sceptical eye on the activities of a western military-industrial complex ravaging the planet’s poorest regions.

These war industries fill their coffers by using weapons indiscriminately on “enemy” populations, spawning new and fiercer enemies – while often propping them up too – to generate endless wars. The consequences include massive displacements of these populations who then destabilise other regions, spreading the effect and creating new opportunities for the arms manufacturers, homeland security industries, and the financial industries that feed off them.

A true environmentalist has to look as critically at western policies in Iraq, Libya, Syria, Ukraine, Venezuela and many other areas of the globe as he does at UK policy in the Welsh hills and the Lake District.

All indications are that Monbiot lacks the experience, knowledge and skills to unravel the deceptions being perpetrated in the west’s proxy and not-so-proxy wars overseas. That is fair enough. What is not reasonable is that he should use his platforms to smear precisely those who can speak with a degree of authority and independence – and then conspire in denying them a platform to respond. That is the behaviour not only of a hypocrite, but of a bully too.